When you play Genshin Impact for the first time, you're given a choice to select between two twins, Lumine and Aether. This will be your main character in the game, the Traveler. Canonically, Hoyoverse has made Aether the main character, while Lumine plays the role of the other twin in the storyline.

The Traveler has the ability to resonate with any element in Teyvat as far as you interact with the Statue Of The Seven in the nation of the respective element. Sumeru is the fourth main region in the game, allowing you to get access to Dendro Traveler. 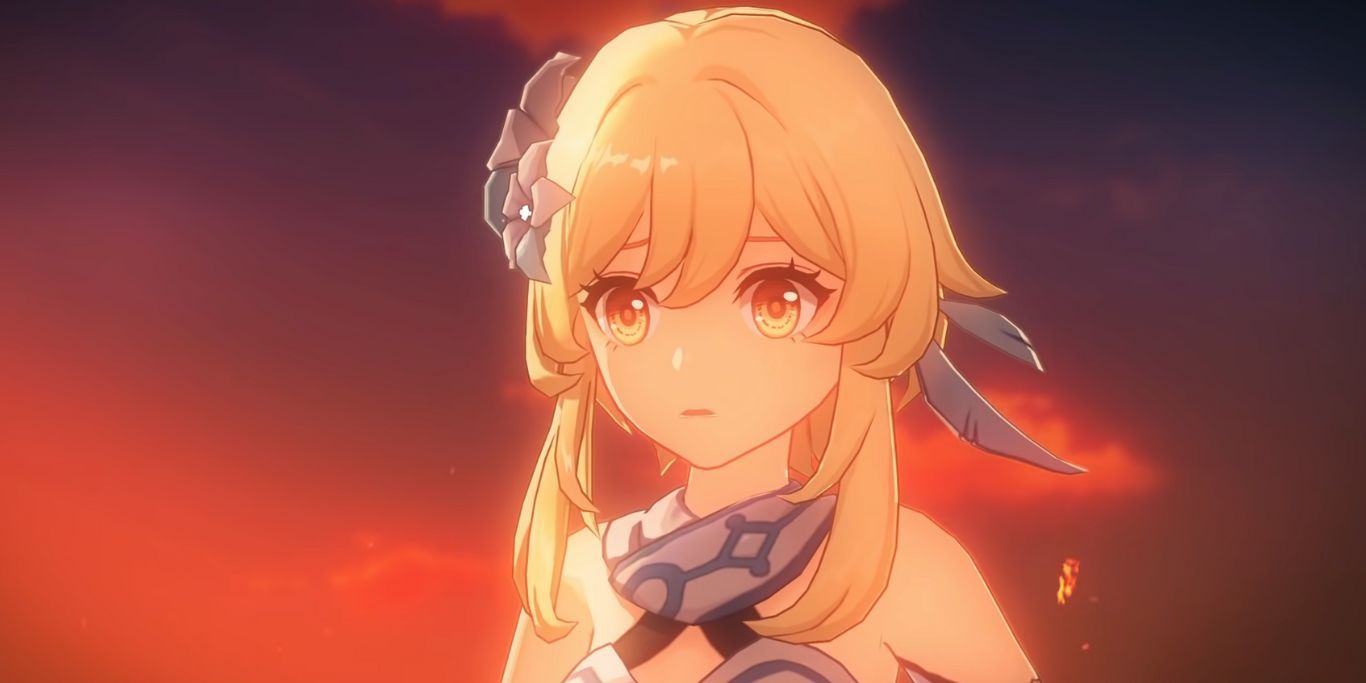 Since you're using the Traveler with a certain element, it is only fair for your first instinct to be to make a build around elemental damage. Luckily, Dendro Traveler has a ton of applications for their element, making it possible to base an entire build around that part of damage output.

The artifact set required for this piece is undoubtedly Deepwood Memories. Every artifact set has a special bonus when you put together two or four of its pieces. The bonuses provided by this artifact set are as follows:

This artifact set unlocks when you get to Sumeru, which can be a long way away if you've just started playing the game. Currently, you can also get this set from the special boxes you get after clearing a particular Abyss floor for the first time.

As for the weapon, the elemental damage build definitely fits perfectly with the Mistsplitter Reforged. This weapon was released alongside Kamisato Ayaka and is currently her signature weapon. Since Traveler can't deal Dendro damage on normal attacks, this weapon can give them up to a 28 percent Dendro DMG bonus at refinement one.

With the correct artifact set and weapon, the Traveler can deal significantly more damage with their Elemental Skill and Burst, which can further be increased by applying the Burst with Electro, increasing its attacking speed for the entire duration. With their sixth constellation, you can get another 12 percent Dendro DMG bonus.

This build relies on the Traveler dealing a ton of damage, which is also dependent on your ATK percent, Elemental Mastery, and the Crit ratio. Thankfully, the weapon has up to 44.1 percent Crit DMG making it easier to get the perfect ratio. 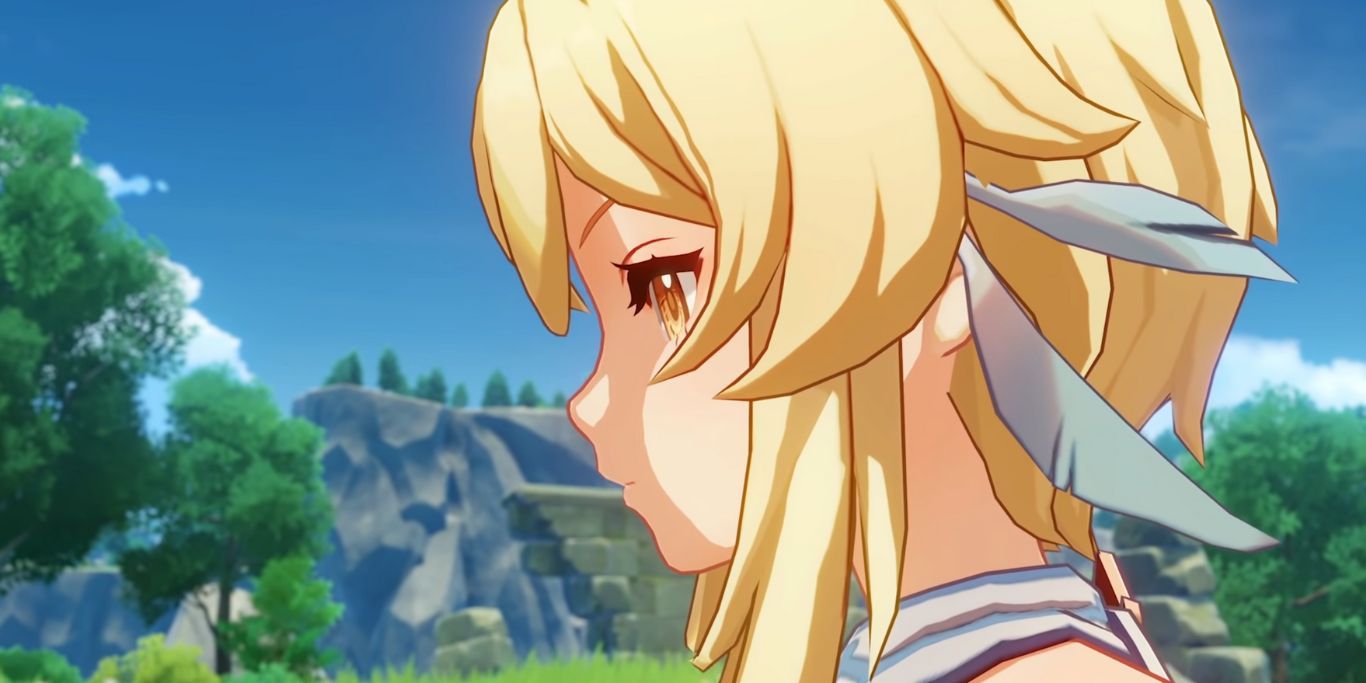 While it's fun to see the Traveler dish out a ton of Dendro damage, it's even better to see multiple damage numbers because of the sheer amount of reactions you can trigger with their skill set. The Elemental Burst stays on the field for 12-15 seconds, making it perfect to trigger Dendro reactions.

Further, when you look at their passive and active talents, it's obvious that a little reaction build is incentivized by the developers. Firstly, their Elemental Burst allows you to buff it in different ways using Hydro, Electro, or Pyro on it and their buffs are as follows:

You will notice that with every single buff, the Dendro DMG dealt by the Burst is increased. This allows for various Dendro reactions to occur along with this. Further, her passive talent Verdant Overgrowth increases the active character's Elemental Mastery within the Burst AoE.

The second passive talent, Verdant Luxury also increases the Traveler's Elemental Skill and Burst damage based on their Elemental Mastery, making it perfectly combined with the build.

To buff this even further, Freedom-Sworn can give an immense damage boost to the active characters whenever you trigger two Dendro reactions with any element. This works the best if the characters with the other element have a ton of damage output from Normal, Charged, or Plunging attacks.

Finally, Gilded Dreams will increase your Elemental Mastery even further because you'll be using characters with elements other than Dendro for this team, giving you up to 230 raw EM for free if you have the four-piece set. 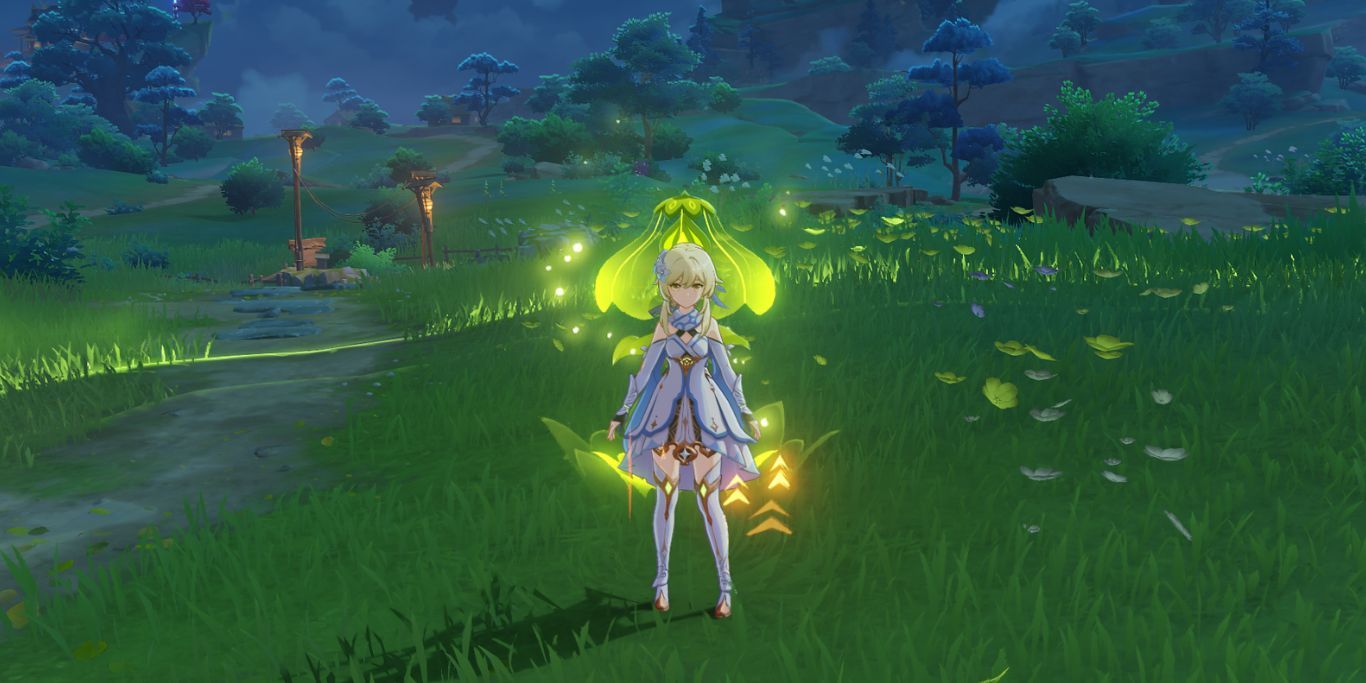 Most of the Dendro Traveler's damage comes out of their Elemental Burst. While the Elemental Skill can also deal damage, it can only be used once every 12 seconds at the base level, and it has one-time damage. On the other hand, Burst deals damage continuously for a few seconds.

Having a run-time of up to 15 seconds, the Burst also has a cooldown of 20 seconds. With this build, you'll most likely have your Burst ready by the time it comes off cooldown. Sacrificial Sword has a big play in this and is a very important part of this build because of its passive.

You have a 40-80 percent chance of getting an extra Elemental Skill with the Sacrificial Sword. This becomes higher with the refinement of your weapon, making it essential to have multiple copies of it. Since it's a four-star weapon, this can be much easier with a bit of luck.

Since you are going to have a lot of Energy Recharge with this build, Emblem of Severed Fate automatically becomes the best choice. The four-piece set increases your Elemental Burst damage based on your Energy Recharge, which is also increased with the two-piece set. 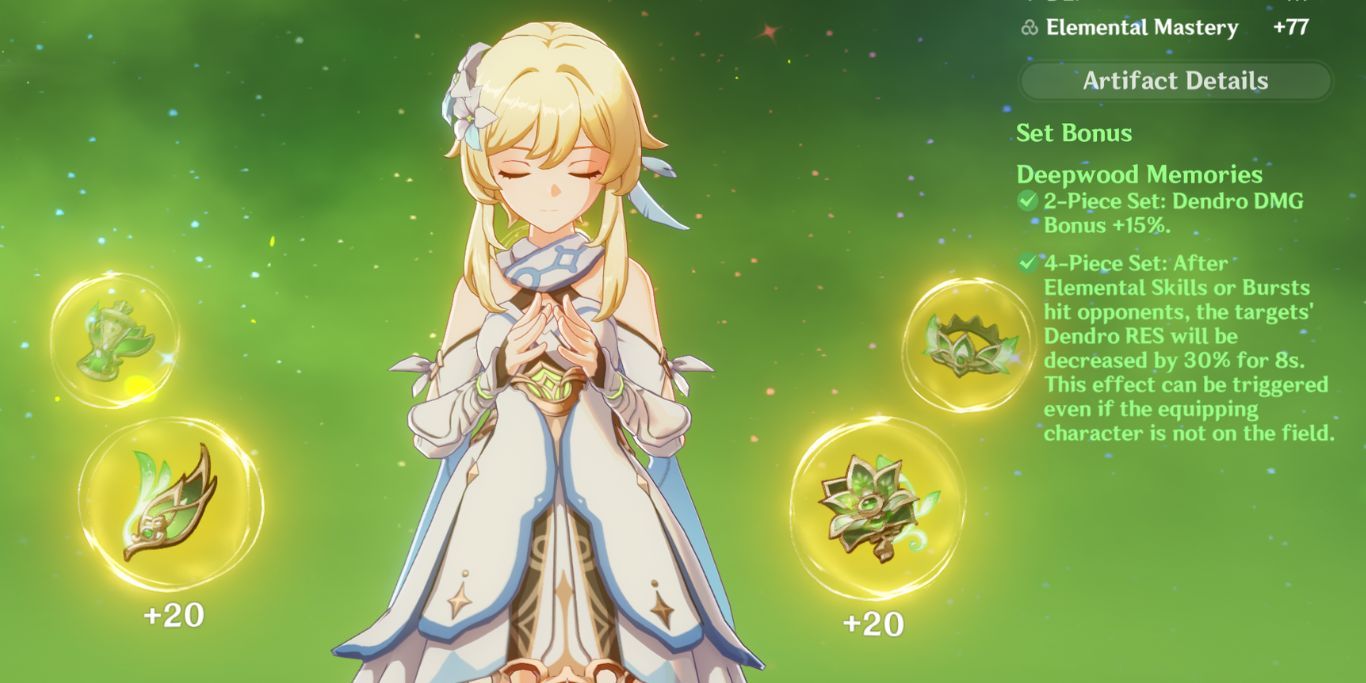 There are multiple possible set bonuses that can be useful on the Traveler based on the build you're going for, and this is the same for their stats. Here are the artifact main stat and sub stat priority for the main character: 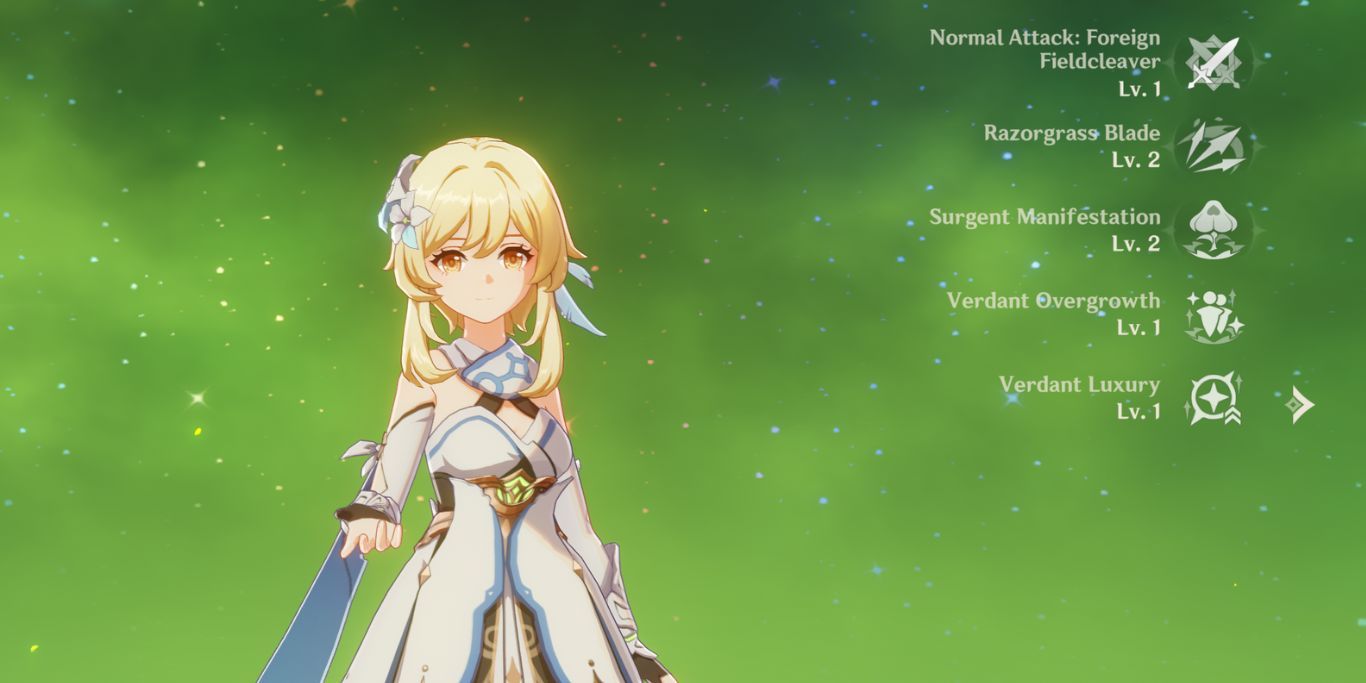 While every other playable character in the game comes with six talents, the Traveler is special and only comes with five of them. The last passive with every character usually doesn't affect in battle. Regardless, the main character still has three active Talents that can be upgraded by ten levels.

While the ascension level is shared by the Traveler across all elements, the Talents are different with each one of them, and thus need to be upgraded differently. As for Dendro Traveler, her Elemental Burst is the definite first choice to upgrade no matter what build you're going for.

This is followed by Elemental Skill, and then you can upgrade your Normal Attack talents if you like the character, but it's not required since you'll never use her basic attacks. 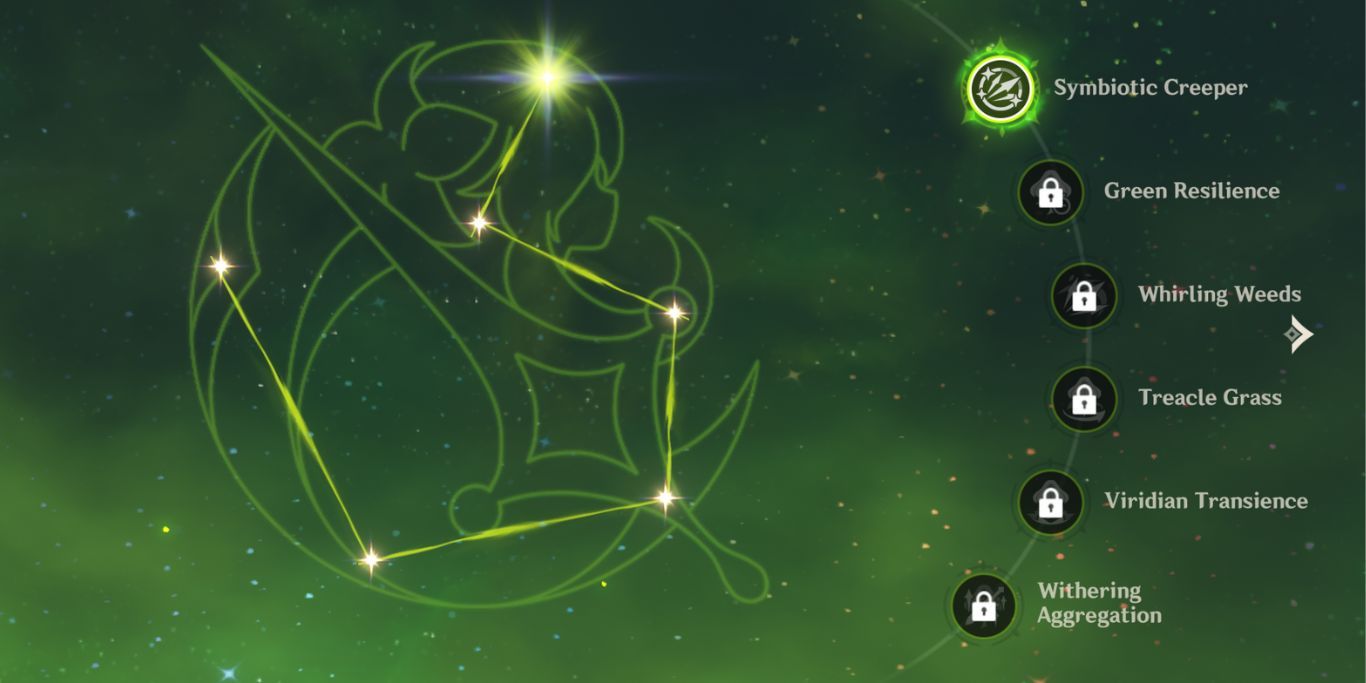 Here are the constellations for Dendro Traveler that can be acquired for free by playing through the game and exploring: