Xinyan is a stand-out character in Genshin Impact. She’s full of feisty rebellious rocker energy, and is the sole musician in all of Liyue. She and her bass guitar have a following of loyal fans despite Liyue’s general distaste for rock music.

As a Pyro-user and a Claymore-wielder, she’s very versatile, and can be built to be a main DPS, support DPS, or a shield support for the team. Since she’s so versatile, any weapon can be a great weapon in her hands, and it really just comes down to how you want to use her in a team. 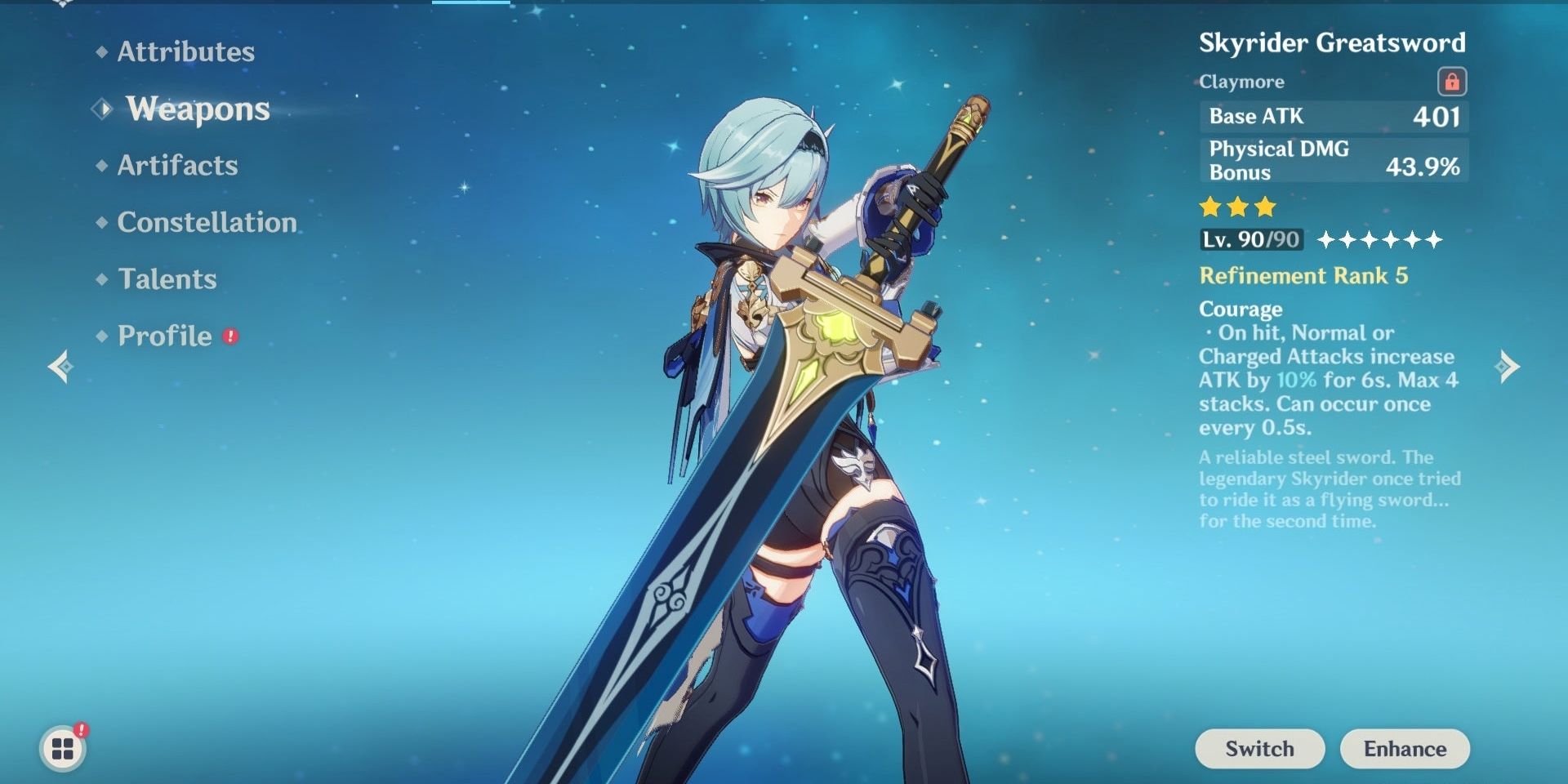 The Skyrider Greatsword can be found in a couple of locations throughout the map. It can be found inside the chests scattered around, making it a common weapon and easy to obtain, or by destroying a rock in the Guyun Stone Forest. It increases Base Attack between 39 and 401, depending on Xinyan’s level. The substat is a physical damage bonus, which gives a 9.6 to 43.9 percent boost.

When she hits an enemy with her Normal or Charged Attack, the Attack will increase by six percent for six seconds. This can be stacked a maximum of four times. 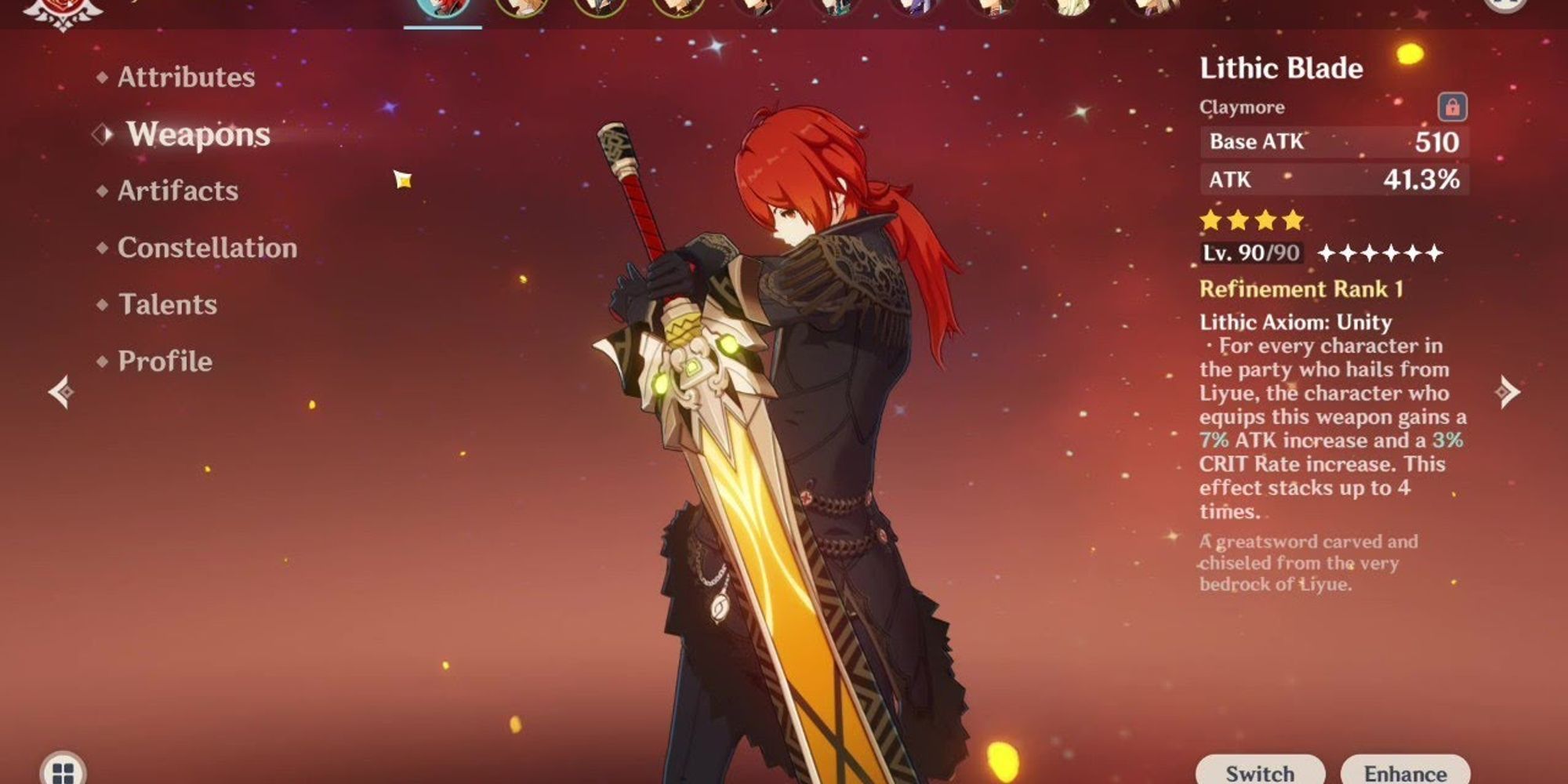 Available through Weapon Event Wishes, the Lithic Blade will increase Base Attack between 42 and 510, and boost Attack in a range from nine to 41.3 percent with its substat. Both of these perks depend on the level you have Xinyan.

When using the Lithic Blade, she’ll get a seven percent Attack increase for every party member from Liyue, and a three percent Crit Rate boost. This can be stacked four times. Since Xinyan is from Liyue herself, this is automatically going to give her at least one stack. 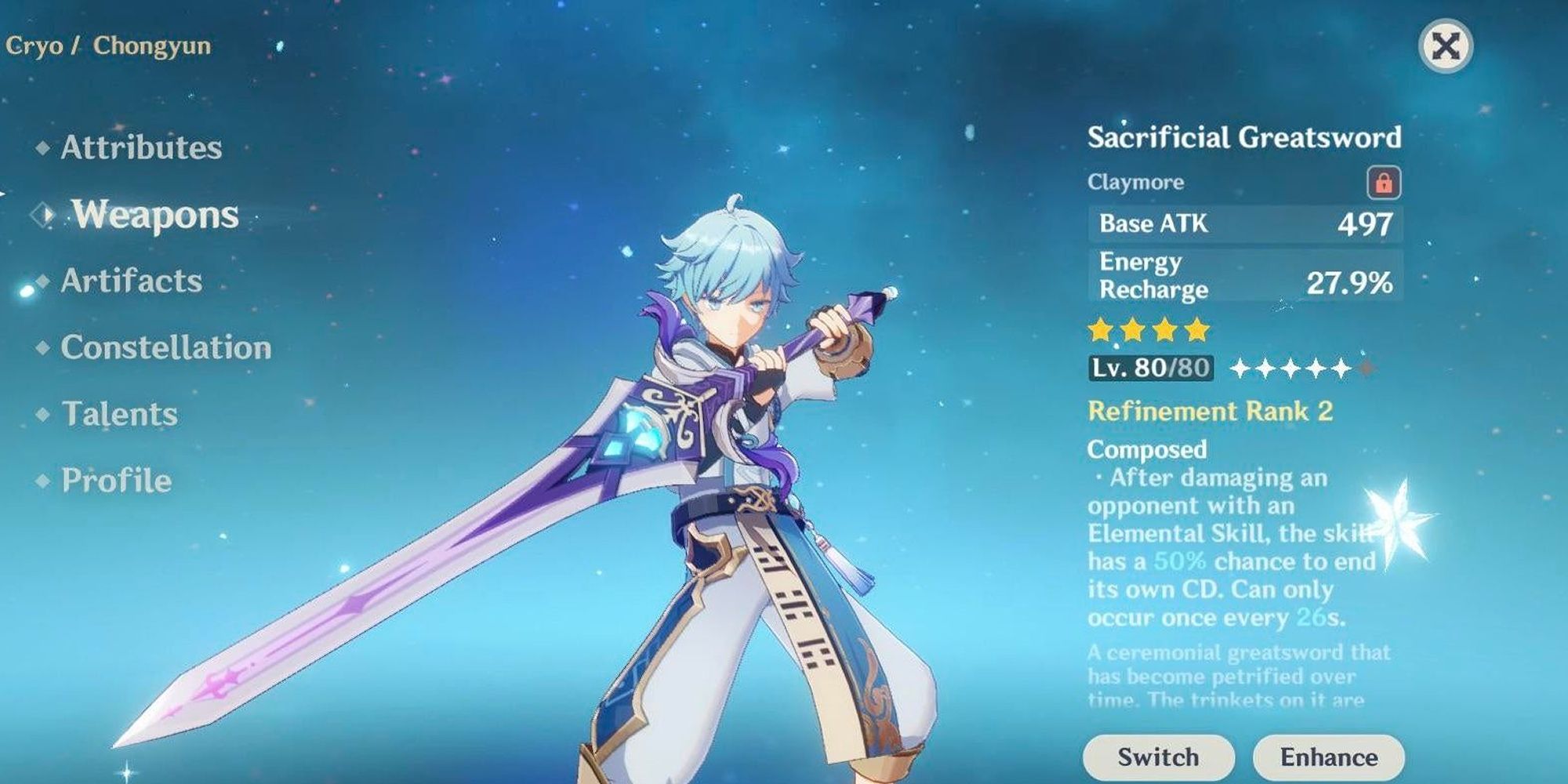 Obtain the Sacrificial Greatsword through Wishes to get a Base Attack boost between 44 and 565 for Xinyan. The secondary stat is Energy Recharge, which increases 6.7 to 30.6 percent.

Once you’ve used Xinyan’s Elemental Skill to deal damage to any opponent, the skill will have a 40 percent chance of ending its own cooldown, and this can happen once every 30 seconds. This means you can get Xinyan back on the battlefield and use her Elemental Skill more frequently. 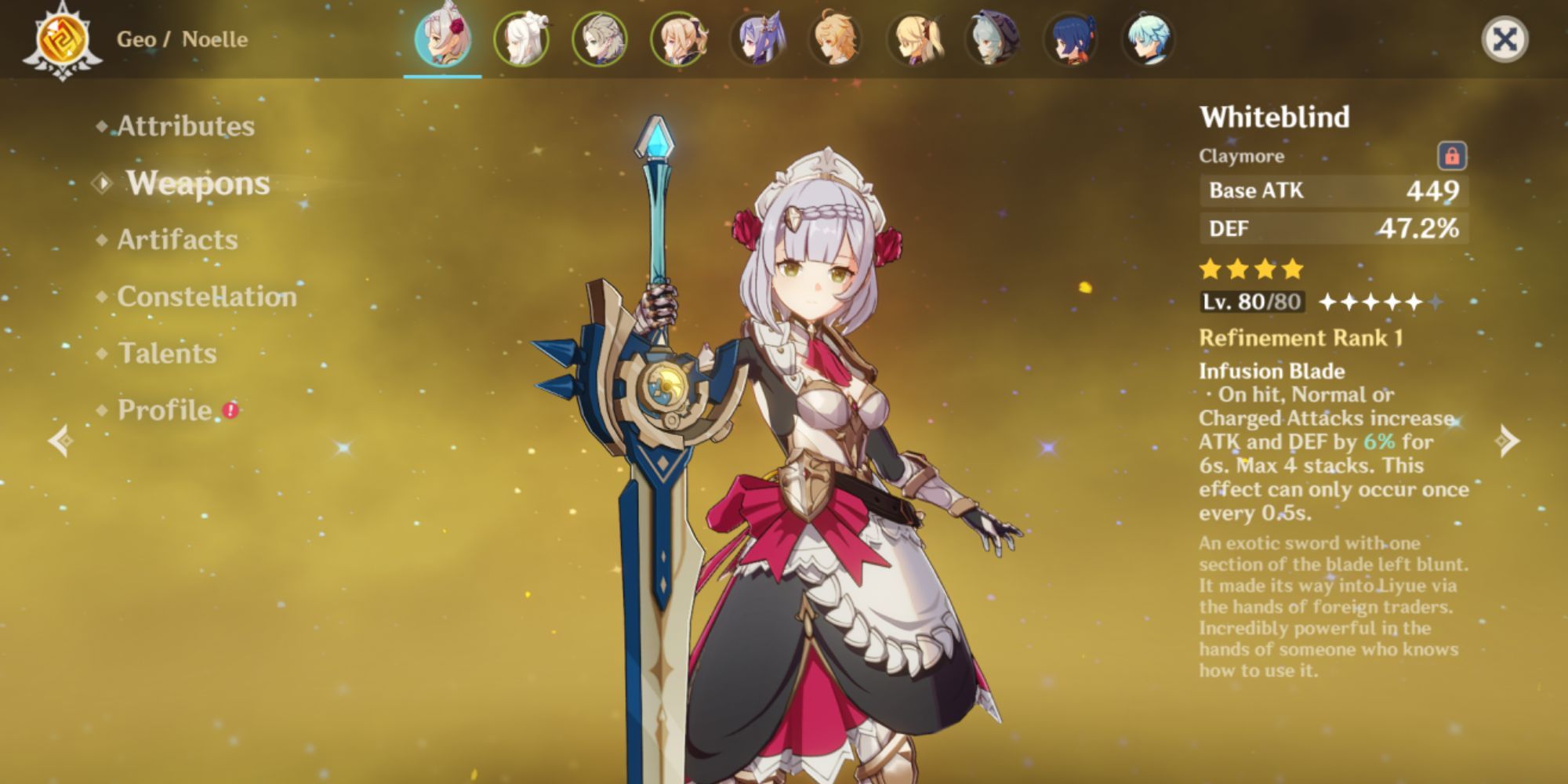 You can forge the Whiteblind for Xinyan at the blacksmith’s shop. The Base Attack boost ranges from 42 to 510, and the secondary stat boosts Defense between 11.3 to 51.7 percent, both based on her level in the game.

Normal or Charged Attack hits will increase Attack and Defense by six percent for six seconds. This can be stacked a maximum of four times for a total of 24 percent. You can use this once every five seconds. 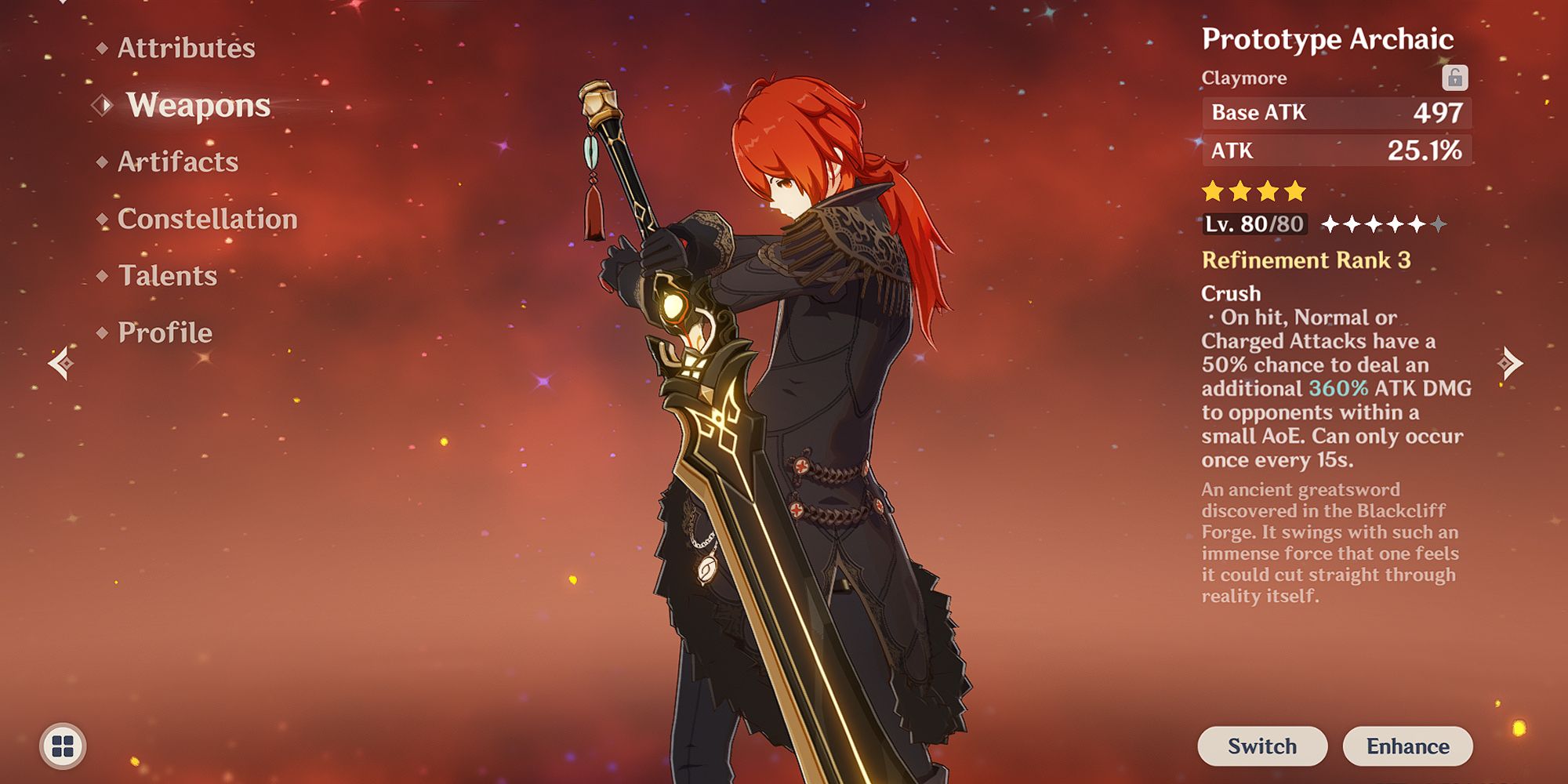 Another weapon you’ll forge at the blacksmith’s shop, the Base Attack will get an increase ranging from 44 to 565, depending on Xinyan’s level. The substat of the Prototype Archaic is Attack, and it will get a six to 27.6 percent boost.

Normal and Charged Attack hits will have a 50 percent chance of dealing an additional 240 percent Attack damage within a small AoE. This effect can happen once every 15 seconds. 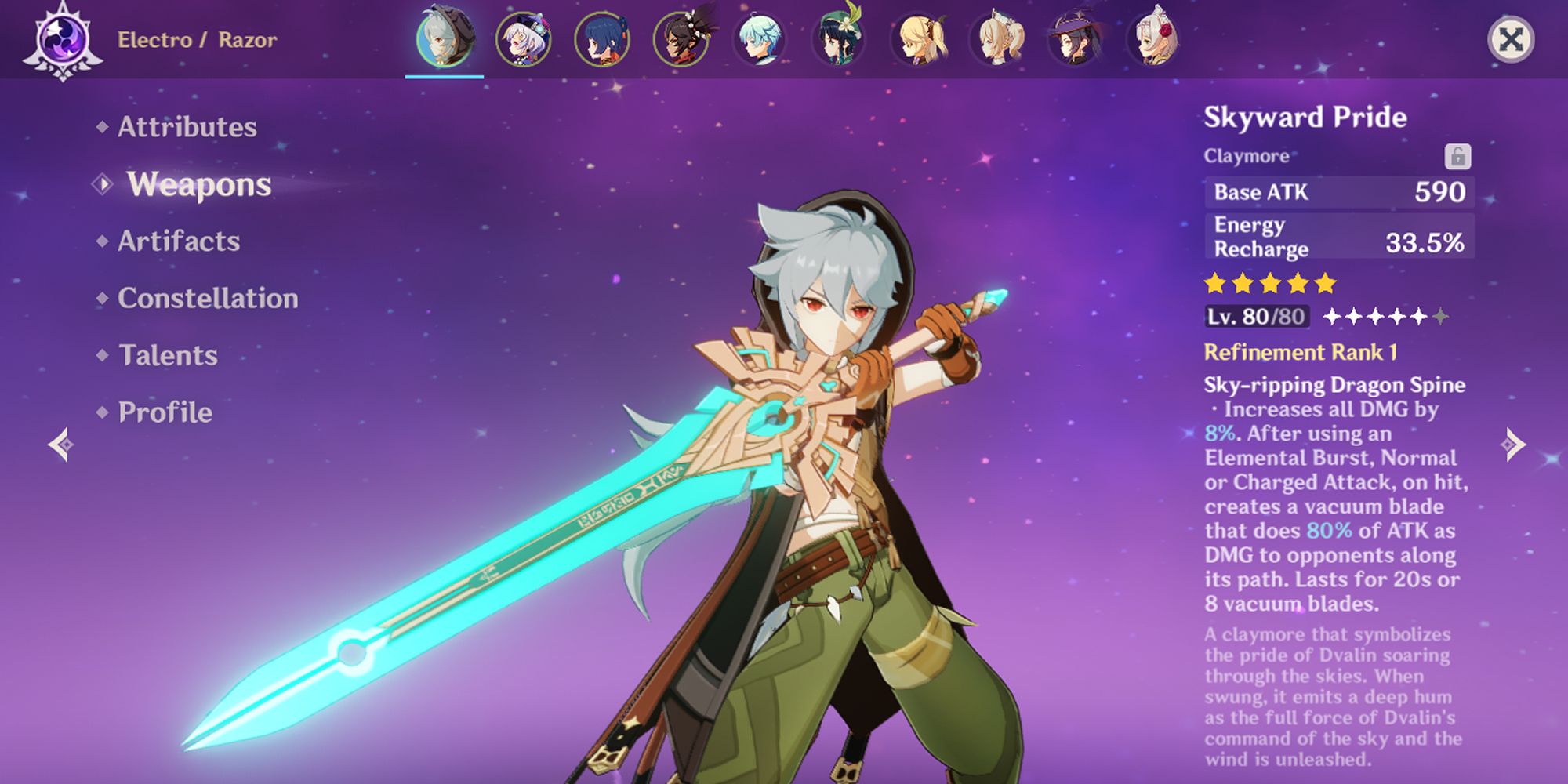 You can pull the Skyward Pride at a slightly harder rate from Wishes, but if you get it, it will give Xinyan a 48 to 674 boost to her Base Attack. The Skyward Pride also grants an eight to 36.8 percent increase to her Energy Recharge from its substat.

All damage is increased by eight percent with this Claymore. Whenever she uses her Normal or Charged Attack, or her Elemental Skill or Burst, it creates a Vacuum Blade that does 80 percent of Attack as damage to any targets in its path. This lasts for 20 seconds, or until there are eight Vacuum Blades. 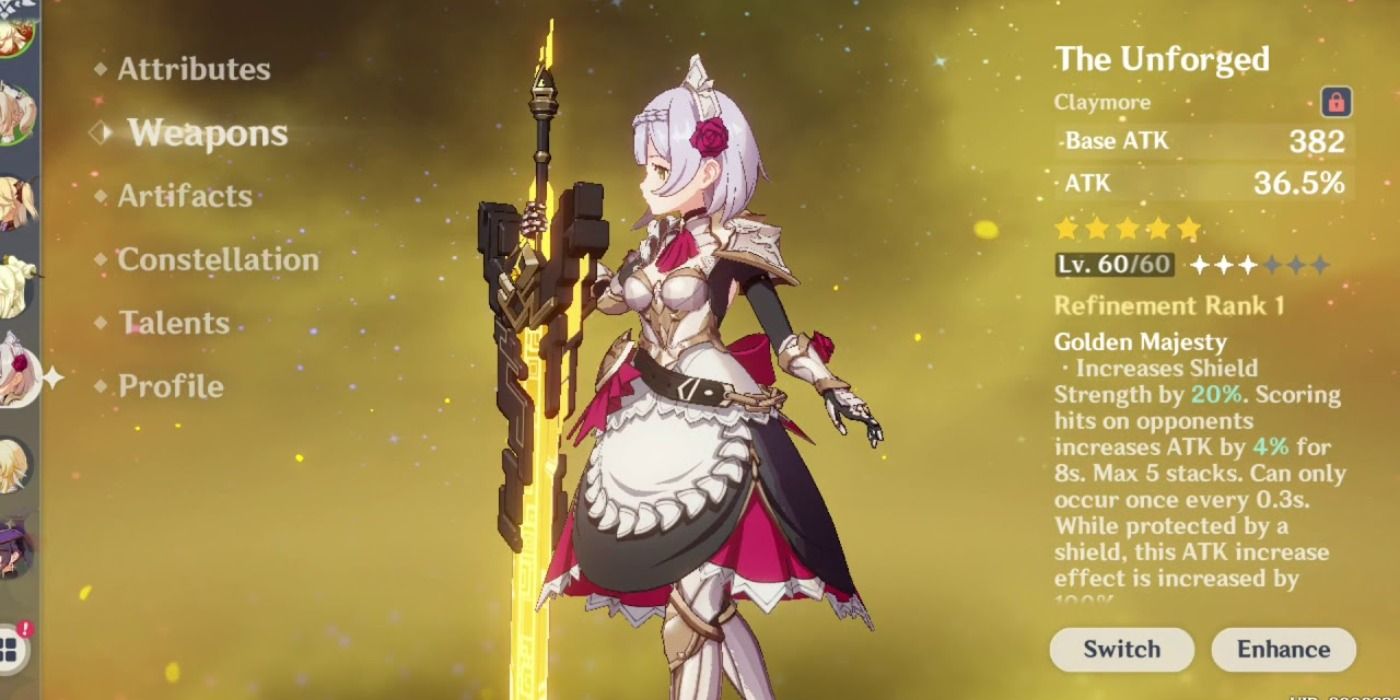 You can get the Unforged through Weapon Event Wishes. With it, Xinyan’s Base Attack will increase 46 to 608, and the substat will boost her Attack by another 10.8 to 49.6 percent. Her level affects how low or high these perks benefit her.

Her shield strength will increase 20 percent, and any hits she makes will increase her Attack by four percent for eight seconds (this can be stacked up to five times). When she’s protected by the shield, the effect will be 100 percent effective. 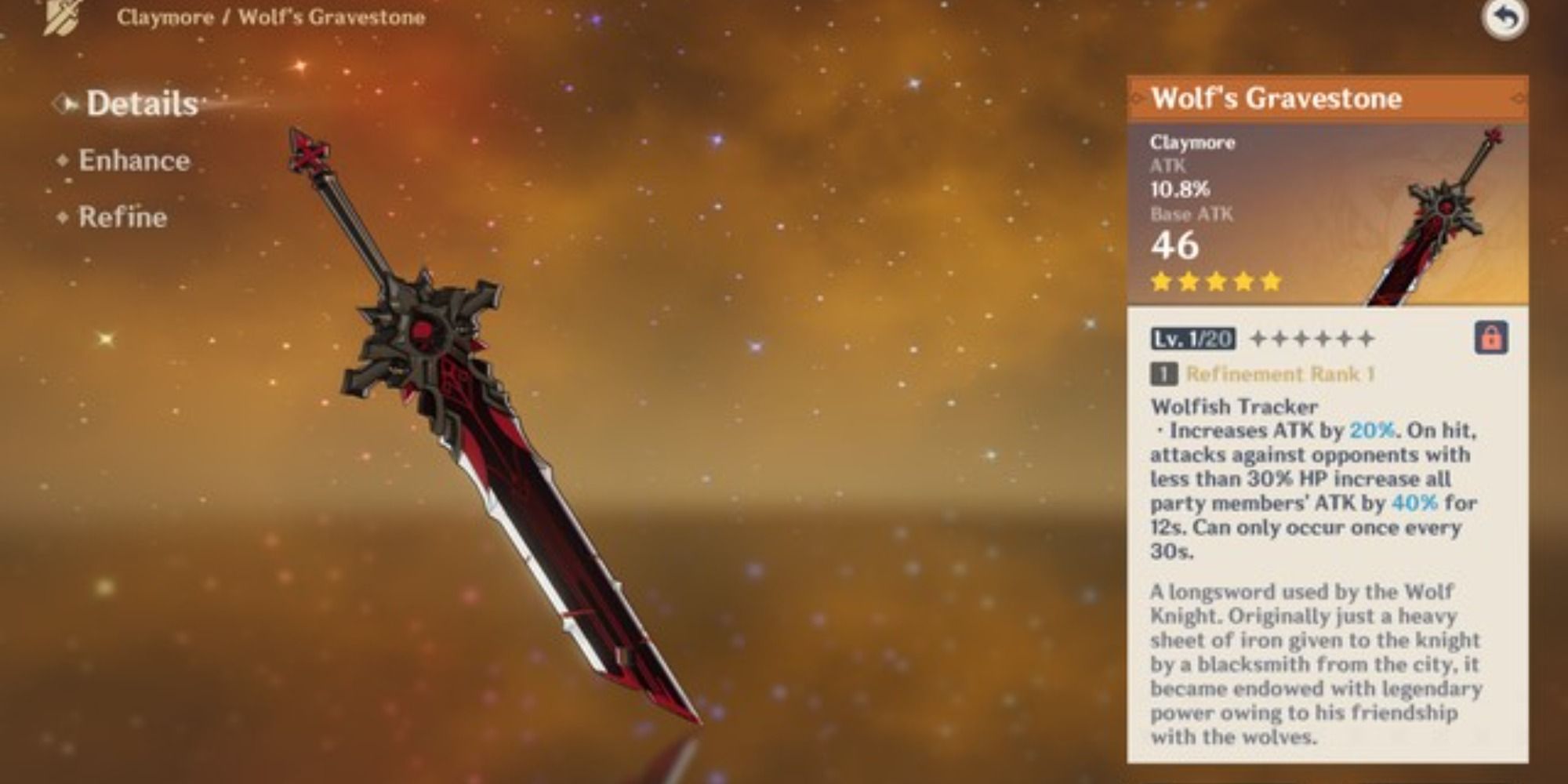 Obtainable through Wishes, the Wolf’s Gravestone will boost her Base Attack by 46 to 608, depending on her level. It has a substat of Attack which increases that by 10.8 to 49.6 percent, also based on her level in the game.

Attack will go up by 20 percent overall with this Claymore. Whenever Xinyan hits a target with less than 30 percent HP, all party members will get a 40 percent increase to their Attack for 12 seconds. You can benefit from this once every 30 seconds. 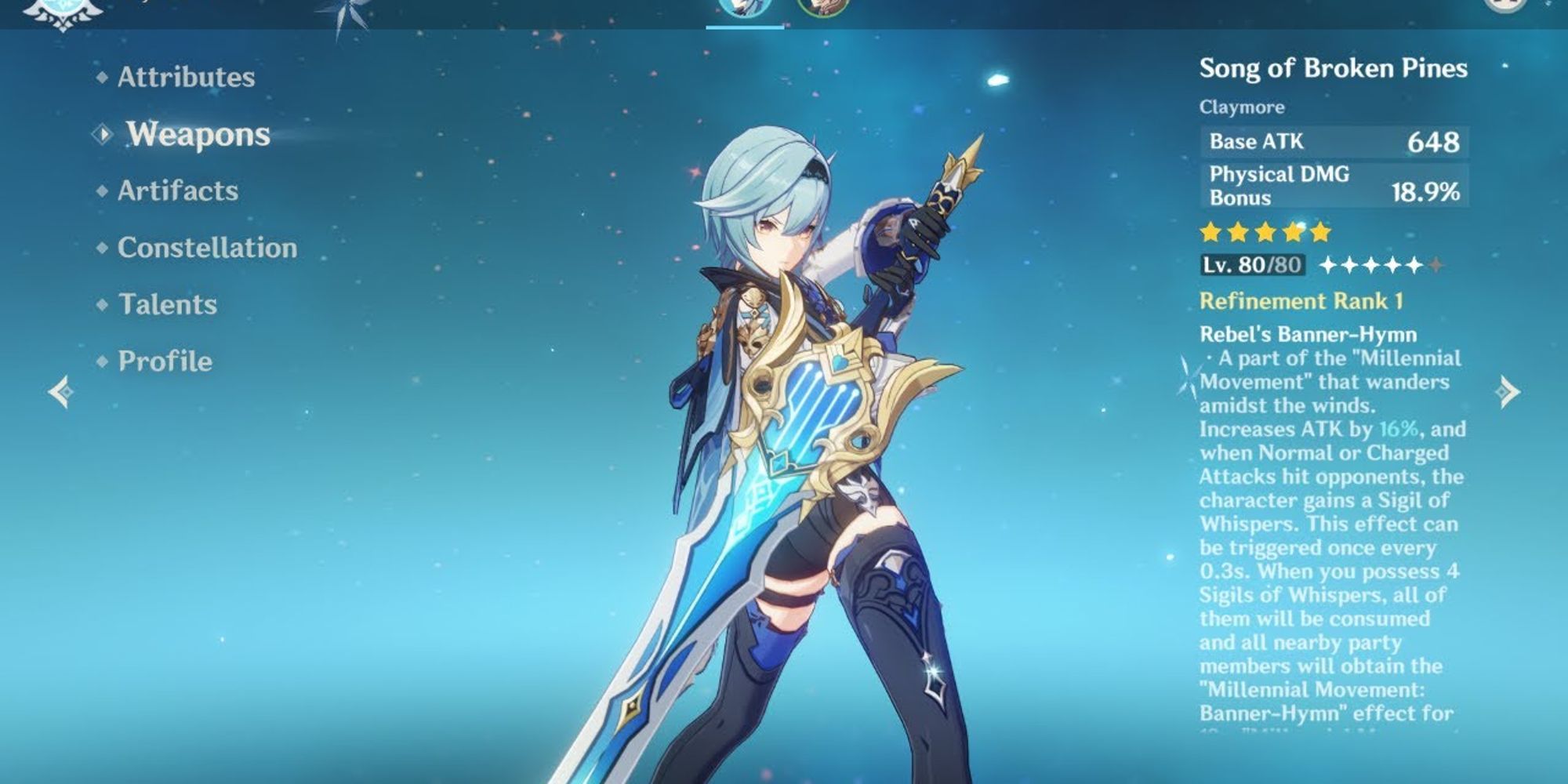 The Song of Broken Pines can be pulled from Weapon Event Wishes. The Base Attack boost you gain from it ranges from 49 to 741, and the secondary stat offers a physical damage bonus between 4.5 and 20.7 percent for Xinyan.

It will increase Attack by 16 percent, and Normal and Charged Attacks will give Xinyan a Sigil of Whispers. This effect can be triggered every 0.3 seconds, and once you possess four Sigils, Xinyan will consume them, giving all nearby teammates the Millennial Movement Banner-Hymn. From the Banner-Hymn she will get a 12 percent increase to Normal Attack speed, and a 20 percent boost to her Attack. 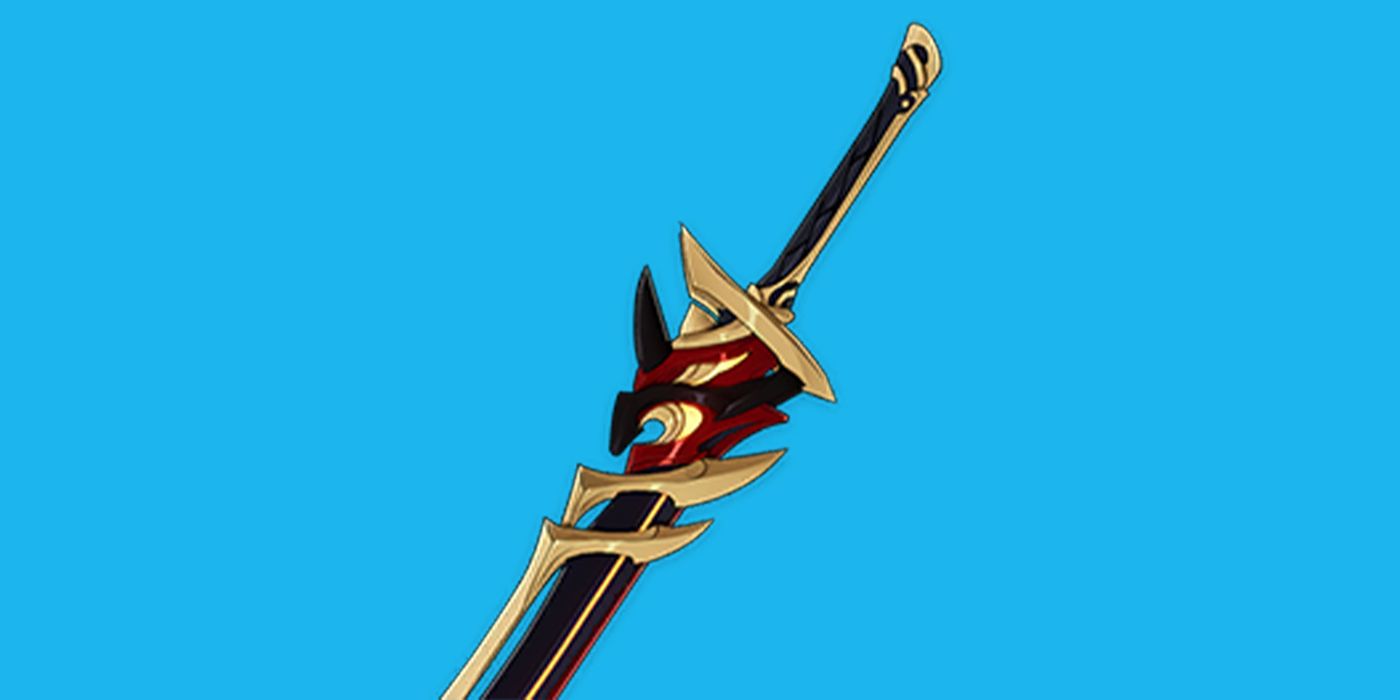 A rare weapon to get, the Redhorn Stonethresher can be found in the Weapon Event Wishes. When you equip Xinyan with it, she'll get a Base Attack boost between 44 and 542, depending on her level. She'll also get a substat boost of 19.2 to 88.2 percent to her Crit damage.

Xinyan's overall Defense will increase by 28 percent, and her Normal and Charged Attack damage will go up by 40 percent of her Defense, making her stronger against in-coming attacks.