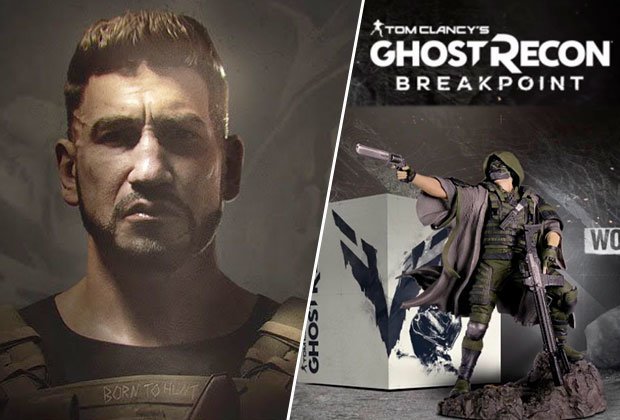 Ubisoft is gearing up to reveal something spectacular and Ghost Recon related later today leading on from the recent free DLC missions added to Ghost Recon Wildlands recently.

As we mention, it all started with the release of this new DLC, named Operation Oracle and staring Punisher actor Jon Bernthal as an unhinged Ghost leader named Cole D. Walker.

But then players started to find clues linked to a well known Tom Clancy company named SkellCon, before a company website and video launched onto the internet inviting players to join a big reveal event, which takes place on 09 May 2019, 11:30 PDT / 7:30PM BST / 8:30 PM CET.

What’s interesting is that the website for this special event has a ‘pending’ ERSB rating… suggesting we’re going to see a wholly new game, not more DLC.

On Wednesday fans noticed that the Ubisoft store had details about a new collectors edition for something called Ghost Recon Breakpoint, which was eventually removed but not before someone took a few screenshots and posted it on Reddit.

If this leak turns out to be legit, and to be honest, it sure looks that way, then Ghost Recon Breakpoint will follow on from the latest Operation Oracle DLC mission in Wildlands.

Makes sense, Walker is showing signs of going Rogue in the recent DLC mission and a bit of Hollywood stardom would certainly help front whatever it is Breakpoint turns out to be.

Details from the leak also suggested this would still be a “story-driven four-player experience”, so if you loved some Wildlands, get ready to start saving up and putting those penny’s aside for when the game eventually drops.

As with all things leaky, you have to take it with some grains of salt, but having come directly from Ubisoft themselves, there’s a higher chance of the details here (and those not included on the Reddit thread above) being more legit.

For now, you’ll just have to wait until later tonight for the official reveal to get those all important details direct from the horse’s mouth.

Wildlands has consistently sold well for Ubisoft, so there’s a good chance whatever comes next could be a sequel.

The title launched in 2017 and has received plenty of free and paid DLC since then.

Since release, PVP has been added alongside new missions, and guest appearances from Splinter Cell’s Sam Fisher, Rainbow Six characters, and perhaps most impressively The Predator.

Ubisoft has started 2019 in fine form with The Division 2 releasing to impressive critical response and selling well.

While the sales juggernaut that is Assassin’s Creed seems to be taking 2019 off, Ubisoft is widely expected to reveal Watch Dogs 3 at E3 this year.

For now, those up early enough can settle in and check out what’s coming next for the Ghosts.