If you’ve been playing Supergiant Games’ most recent roguelike, Hades, you’ll likely be experimenting with the variety of weapons in Zagreus’ arsenal. However, if you truly want to get the most out of the Infernal Arms in Hades, you’ll need a special item called Titan Blood — without it, successfully escaping the cruel clutches of the Underworld becomes a far more taxing ordeal.

As a means of helping you on your odyssey through the depths of Hell, we’ve put together a comprehensive guide on how to get more Titan Blood in Hades, which will ensure that you’re always properly equipped for Tartarus, Asphodel, Elysium, and beyond.

Hades — What Is Titan Blood?

Titan Blood is a unique item in Hades that can be used to upgrade the Infernal Arms. Basically, each weapon in Hades can be divided into four sub-categories, known as Aspects. Every individual Aspect changes the weapon in its own unique way. For example, the Stygian Blade with Aspect of Poseidon dislodges Cast shards from enemies — which, as pointed out in our best Hades builds guide, pairs brilliantly with Artemis’ Exit Wounds Boon — while the Aspect of Arthur increases your base HP and changes your Special to a move designed to increase damage resistance. 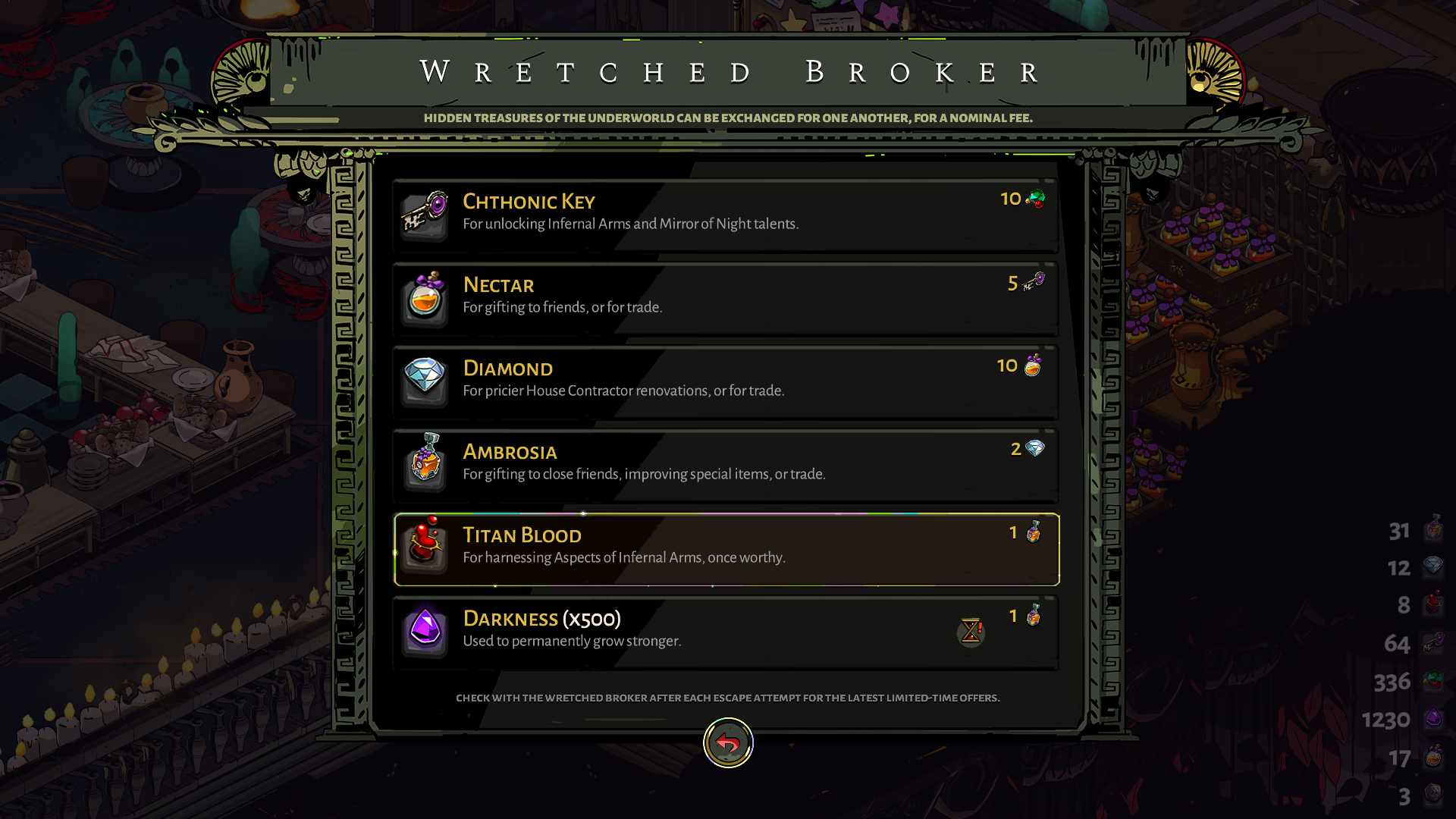 The original form of each Infernal Arm is Aspect of Zagreus, which you automatically unlock after purchasing the weapon using Chthonic Keys. You can use Titan Blood to upgrade this Aspect, or to purchase and upgrade one of the other three. In order to unlock Aspects, though, you’ll first need to purchase every individual weapon, so be sure to pump your Chthonic Keys into those. As indicated by our Hades tips and tricks guide, the most important skill from Nyx’s Mirror of Night is Death Defiance anyway, so you shouldn’t be in any major rush to unlock the lower ranks of it.

However, as well as purchasing every weapon, you’ll also need to do something else in order to unlock Aspects in Hades: get your first Titan Blood.

You earn your first Titan Blood in Hades the first time you defeat Megaera the Fury at the end of Tartarus. Like most chambers in Hades, you get a reward for clearing the room — and in this case, that reward is Titan Blood. 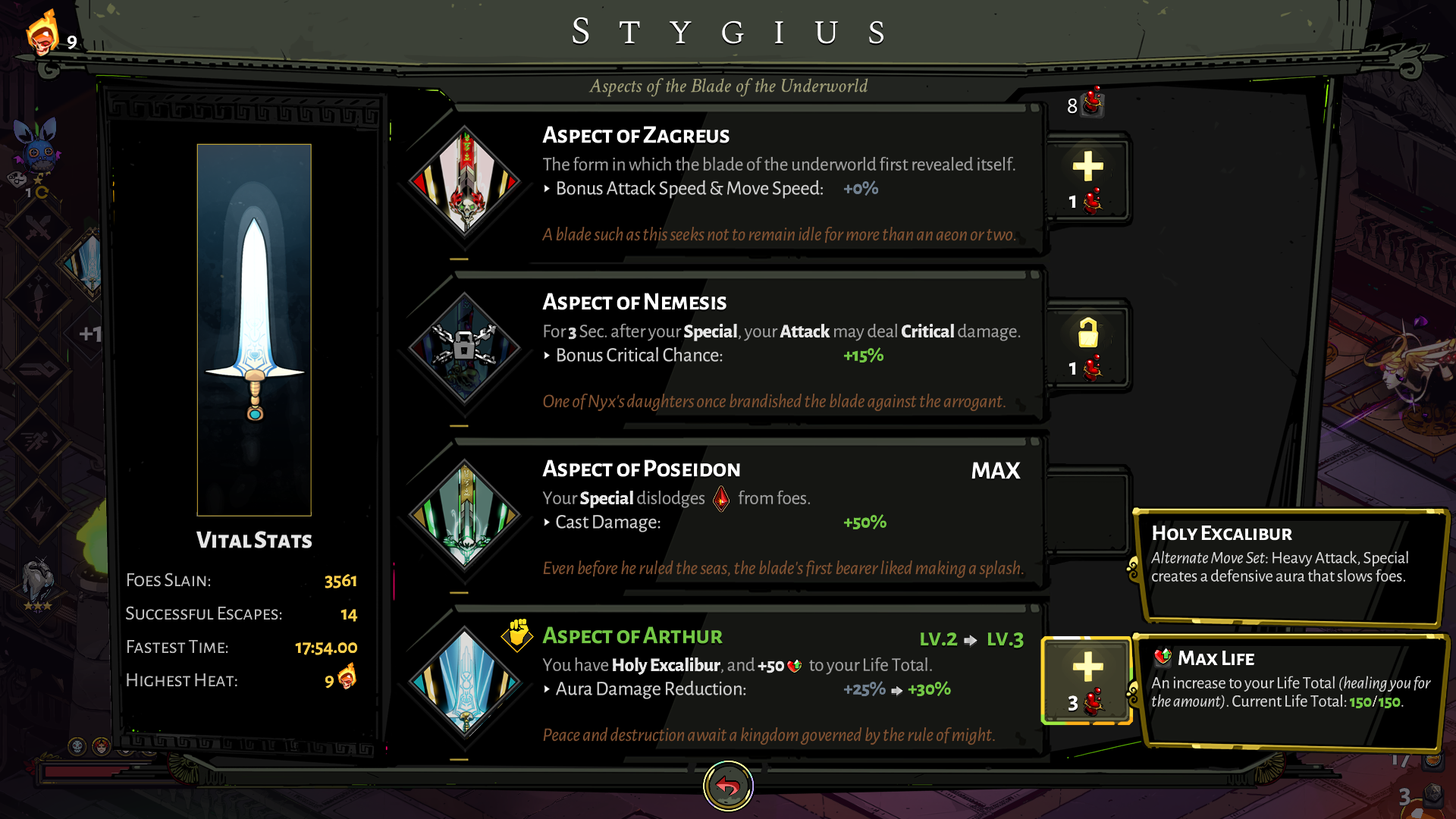 One Titan Blood isn’t going to get you very far, though, so you’ll need to work hard in order to earn more. There are several ways you can go about getting more Titan Blood in Hades:

And there you have it — as you can probably tell, it becomes incredibly easy to farm Titan Blood once you beat Hades for the first time. As a result, you can upgrade all of your weapons as liberally as you like without having to worry about running out of Titan Blood.

Personally, I’d recommend pumping loads into the Stygian Blade’s Aspect of Arthur, the Twin Fists’ Aspect of Demeter, and the Heart Seeking Bow’s Aspect of Hera, because all of them are absurdly effective against bosses. Pumping Titan Blood into them means getting more Titan Blood for little to no effort — it’s basic Underworld maths.