Originally introduced in the first Halo game as the primary antagonists, the Covenant has appeared in every subsequent installment since to a lesser or greater degree. They fit the evil alien stereotype to a T, but they made combat fun in the original Halo, and as the series progressed their background lore would be expanded upon to the point where you start to actually sympathize with them in a few situations.

They’re a fascinating faction to read up on and there are countless books, filler text in the games, appearances in anime, and pages upon pages of lore to explore. The Covenant is possibly one of the most memorable antagonists in video game history and they’re a solid force to be reckoned with. For those looking for a quick refresh for Halo Infinite or first-timers needing a debrief on how this unstoppable alien army came to be, then here’s how the Covenant was formed.

Who Are The Covenant? 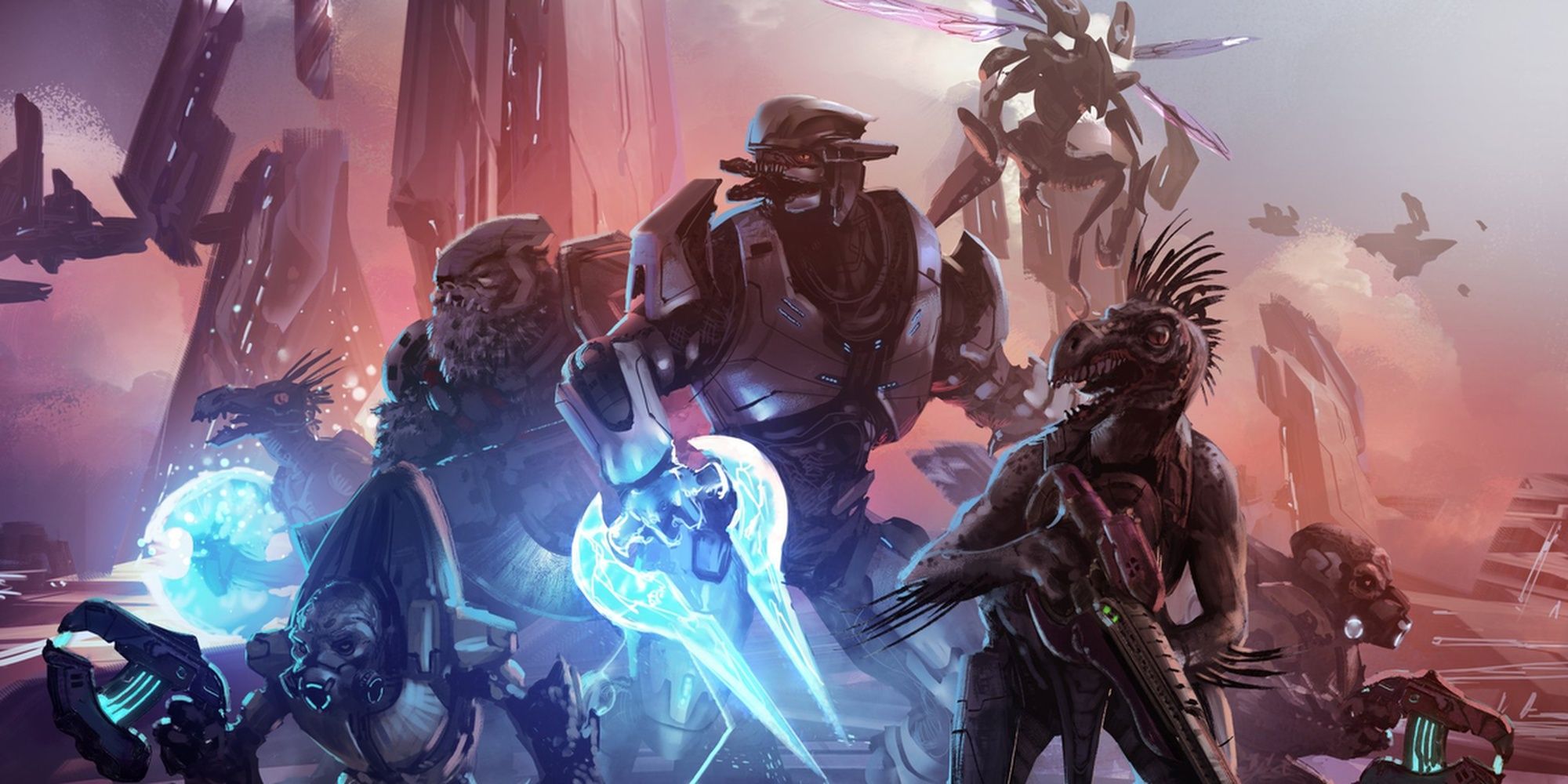 This gigantic force of intergalactic religious zealots is a group of multiple alien species from the Milky Way Galaxy whose number reaches in the millions, yet they're controlled as a whole by fragile alliances and a strict religious dogma.

There are eight different species in total, and they’re somewhat kept in order by the Prophets from their seats within High Charity, a gigantic orbital super church meets space station. When they were first encountered by Humanity, they waged an unstoppable campaign of mass murder using their superior alien technology and overwhelming numbers, the most notable of which was the devastation of the planet Reach where orbital ships fired devastating energy beams that “glassed” the planet's surface, killing thousands and rendering the planet uninhabitable for years.

It took the combined effects of a brutal internal conflict within the Covenant as well as the efforts of the UNSC and countless lives on both sides to break apart the empire to the point where it no longer posed as big of a threat. With the entire Covenant Empire fractured, rudderless, unfocused, and constantly at war with itself as splinter groups vie for control, this genocidal monster is a shadow of its former self.

The Origins Of The Covenant 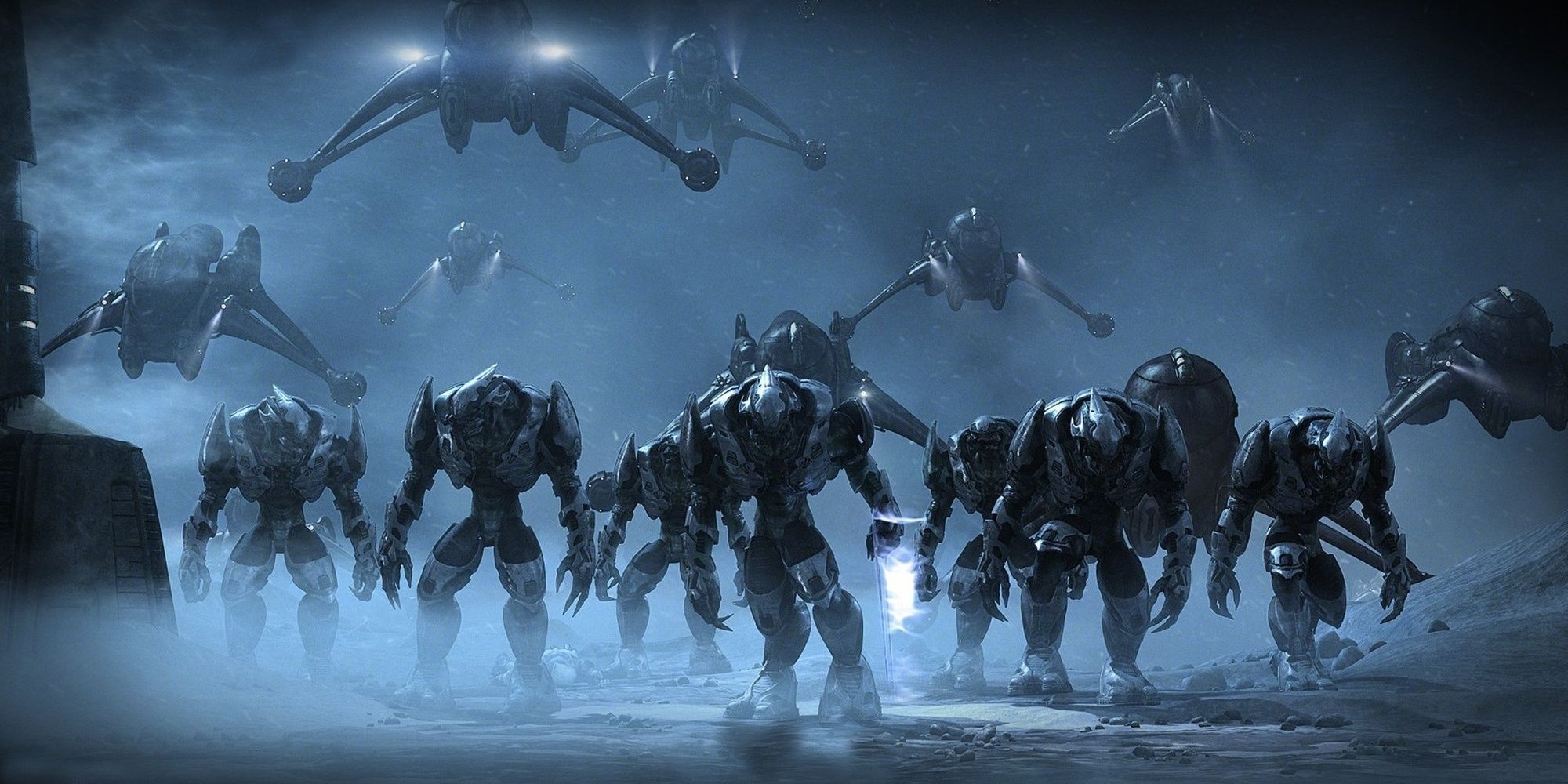 Before it dominated space as a galaxy-spanning Empire, the Covenant had much more humble beginnings. This religious order first began as a splinter group of the San’Shyuum, a race composed of two factions that deified the Forerunners. One believed their technology should be left well alone and the other that it should be taken and used as "gifts from the gods." Guess which one got wiped out.

After an alliance with the Sangheili race (known as Elites in the Halo series), the Covenant began its slow march across the stars, adopting or indoctrinating by force other alien races that it encountered. A slowly growing cult that increased in number until it dominated most of known space in secret before their violent appearance at Human colonies, wiping out all in sight and leaving no trace of themselves, that is until they decided to launch a full-scale galactic war on Humanity after the destruction of Reach.

Led by the Prophets, an alien race that all species within the Covenant turn to for guidance, direction, and general orders, this ragtag group of aliens are held together and aimed with purpose through a dogmatic religion followed to a cult-like degree. And it wouldn’t be a space cult unless there was a belief system built on a massive misinterpretation of ancient events and in the case of the Covenant, it’s quite a doozy.

It is known as The Great Journey, with its teachings often referred to stoically as The Path. These genocidal crusaders believe that the Forerunners were beings that ascended to become omniscient gods and hold them in such a deific perspective as to worship them and hold all of their technology as sacred and theirs by right. With the culmination of The Great Journey being the activation of the Halo Rings and the cleansing of the universe, an interesting Sunday School lesson to say the least.

The Different Species Of The Covenant 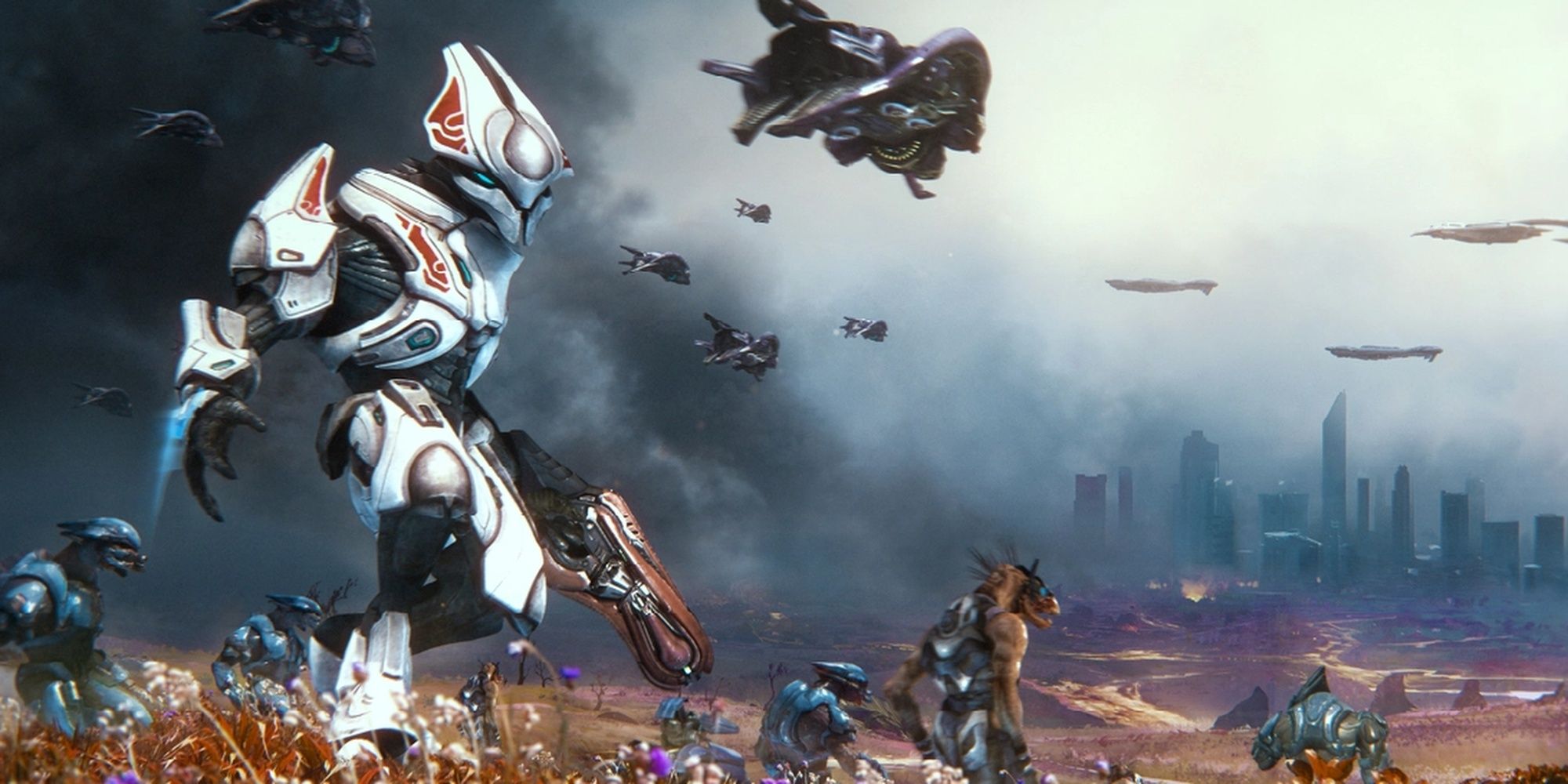 What makes the Covenant such a massive threat is their overwhelming numbers. Their forces come from several planets, so there are billions of religious zealots, willing or otherwise, throwing themselves at whatever target the Prophets point them at.

There are eight races in total that make up the entire Covenant Empire and it’s quite a varied mix of backgrounds and species. From the bottom up they are:

It’s quite the melting pot of different species, although because of this there is inevitably going to be some friction and feuding going on between races that don’t see eye to eye. The most notable of which was between the Jiralhanae and the Sangheili, to the point it arguably helped fuel most of the anger during the Covenant Civil War. 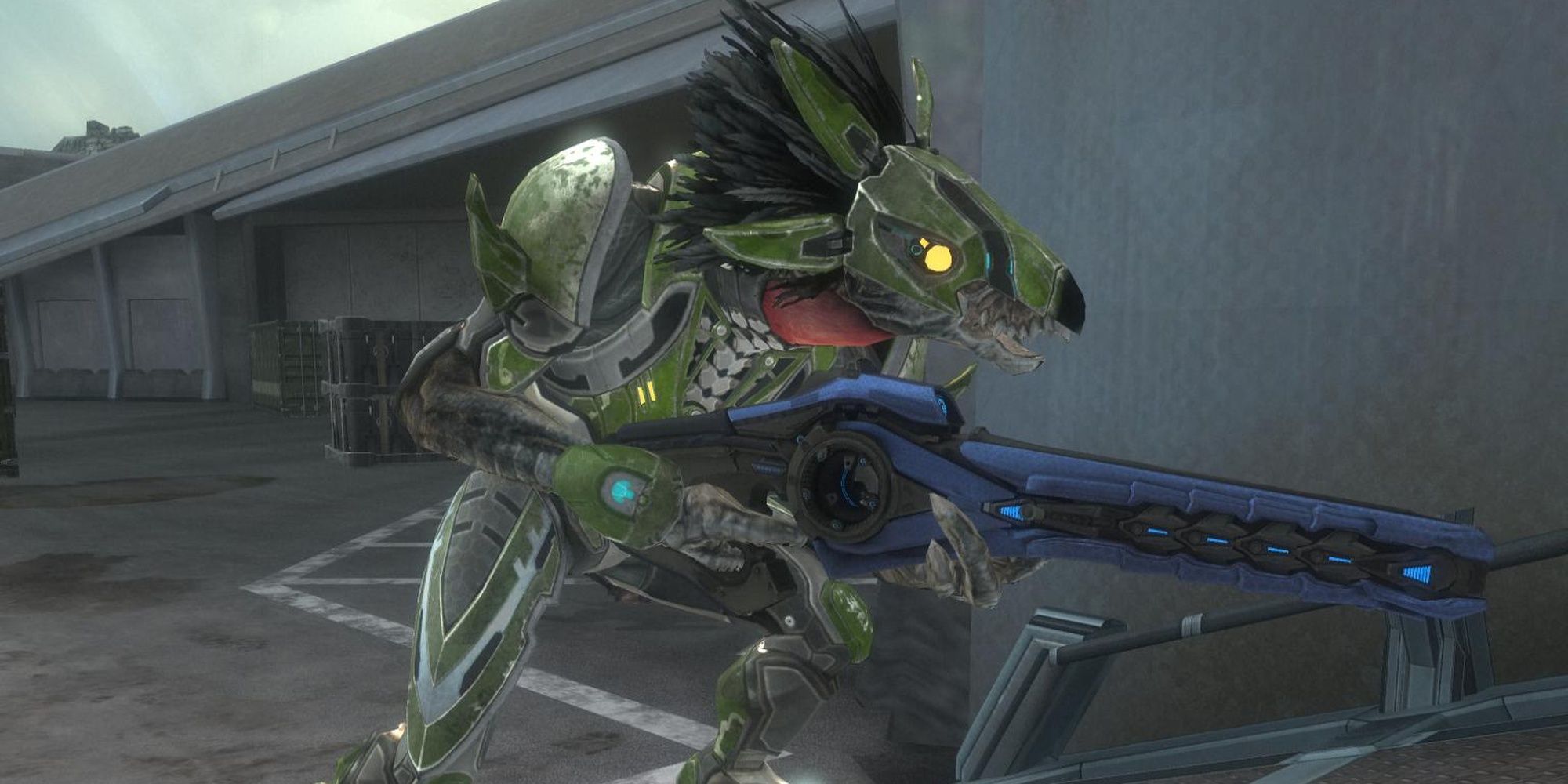 Aside from their superior numbers, another thing that makes The Covenant such an unstoppable force is their advanced technology and powerful energy weapons. Able to melt through tank armor and starship hulls with ease, their beam technology helped them steamroll to galactic superiority for a time during the Covenant-Human war.

Alongside advanced starships and vehicles such as the gravity-defying Banshee, plasma ball blasting Wraith tanks, and Ghosts, the Covenant had an arsenal of weaponry that rendered the armor of Human soldiers pretty much useless. With different species filling specialized roles within their forces, advanced training, and technology such as energy shields protecting their elite shock troops, The Covenants army is an unstoppable force that can easily threaten entire systems.

Once this powerful alien technology was reverse-engineered by Humans and used in combination with the Spartan Programme were they finally driven back, but not without exacting a terrible toll on Humanity. With entire planets rendered lifeless and thousands of graveyards filled with the corpses of their crusades, the Covenant always leaves a bloody aftermath in their wake.

Like all great empires, no matter how long they reign, eventually, they fall either to conquest or internal turmoil, and The Covenant succumbed to both. During their war with Humanity, they succumbed to what’s known as The Great Schism.

This was a civil war that fractured The Covenant Empire to its core, irreparably splintering it whilst the war with Humans began to grind their forces into the ground. It was brought about by the brutal acts of the Jiralhanae who slaughtered the Sangheili members of the High Council on the orders of the San’Shyuum and mostly from their own egos, ousting the Sangheili from their ranks, and attempting to take over the empire from within.

This coup was short-lived as the brutal infighting that commenced saw the Jiralhanae exiled from the Covenant, and the Sangheili taking back their seat of power from within the Empire through an alliance with other tolerant races within the group. With their remaining numbers hunted zealously to extinction as well as further infighting within, the Jiralhanae plans backfired so spectacularly that it also almost led to the downfall of the entire Covenant Empire and their own species. Nice one lads.

Though the Great Schism broke apart the once glorious alien empire, all was not lost. It survived on in a much smaller fashion. With the Prophets mostly dead and their capital in ruins, the remaining members of the Covenant split into several minor factions with each fighting for control of the greater forces as a whole. With some having more success at rallying the troops around a particular cause.

There are numerous groups vying for domination of the Covenant as a whole constantly and just like any major group founded on a zealous religion, certain chapters within it are more extreme than others. The Banished as an example are pretty out there, whilst the Swords of Sanghelios are more stoic, led by the Arbiter and retain most of the control of the Empire through strength and respect from the other races alone.

The Covenant are a shadow of their former selves, but when enough of them are together they're still a force to be reckoned with. For example, Humanity being put on the backfoot by them so easily in Halo Infinite could perhaps mean this once slumbering giant of an Empire is about to reawaken once more and carve another bloody crusade on countless worlds across the stars.