Microsoft’s flagship series is back in a huge way with Halo Infinite. The classic first-person shooter continues the story of Master Chief, the legendary Spartan who’s hellbent on protecting humanity from all extraterrestrial threats. Halo Infinite picks up a few years after the events of Halo 5 and Master Chief faces a new threat in the Banished.

The Banished aren’t exactly new to the Halo series as a whole, as the war faction was featured in Halo Wars 2. This splinter group largely consists of Brutes but does have Covenant soldiers in the form of Grunts, Jackals, Elites, and Hunters. Throughout Halo Infinite, Master Chief will encounter a slew of aliens trying to kill him, so let’s dive into every enemy type in the game. 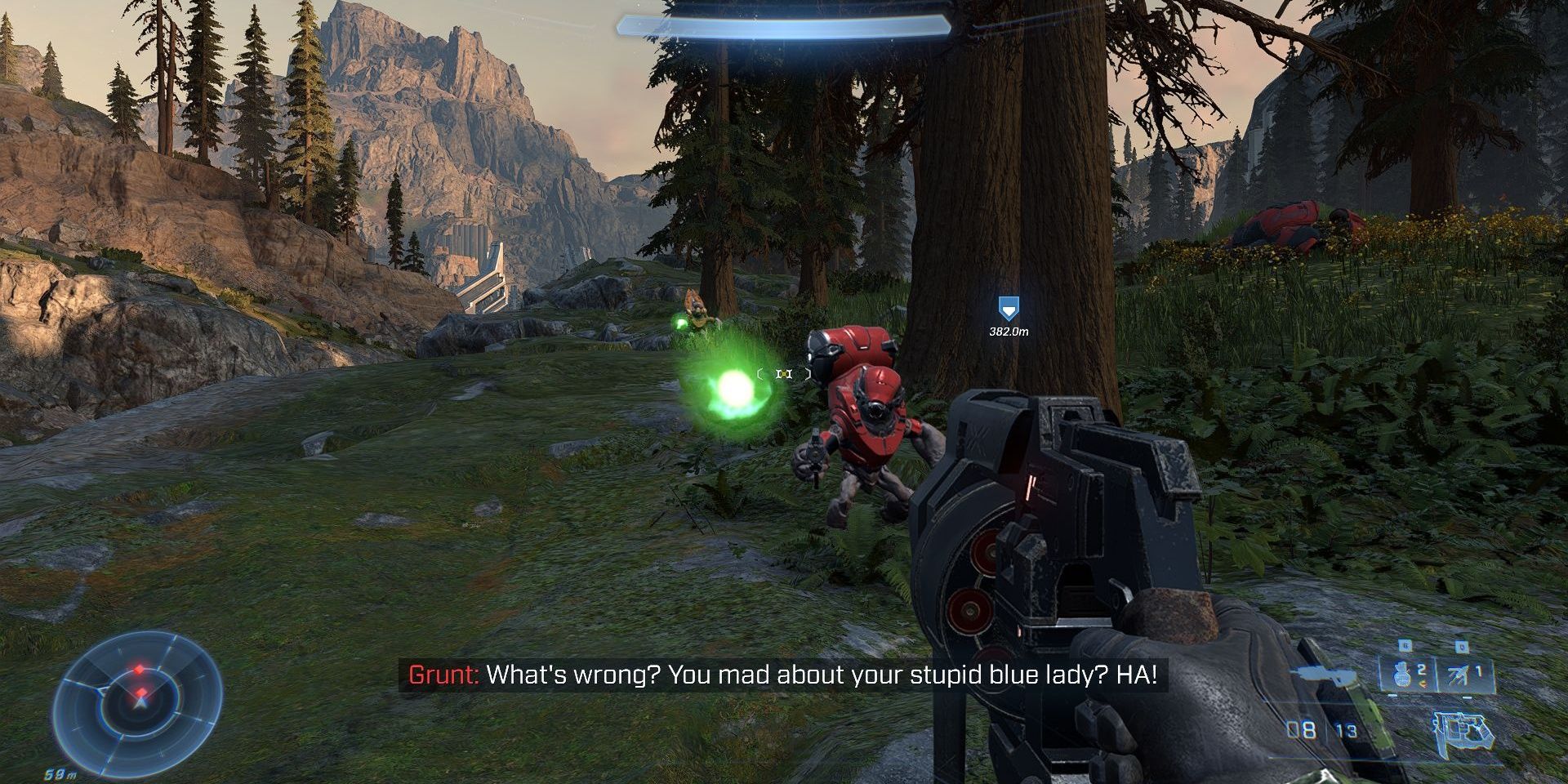 Referred to by humans as Grunts, the Unggoy are the bottom feeders of the Covenant and Banished forces. They’re short, slow, and are completely useless when the commanding officer has been killed, though in Halo Infinite the aliens seem to have a bit more spunk on the battlefield. Grunts have breathing apparatuses on their backs that can explode easily that cause a near-instant death.

Grunts mainly use plasma pistols to try and fry Master Chief’s shields or sprint at the Spartan with two live plasma grenades in their hands. Ultimately, Grunts don’t pose any sort of threat to Master Chief, even the high-value Grunt targets. Even though there are high-value Grunts within the Banished, they will forever be at the bottom of the food chain compared to the other alien species within the faction. 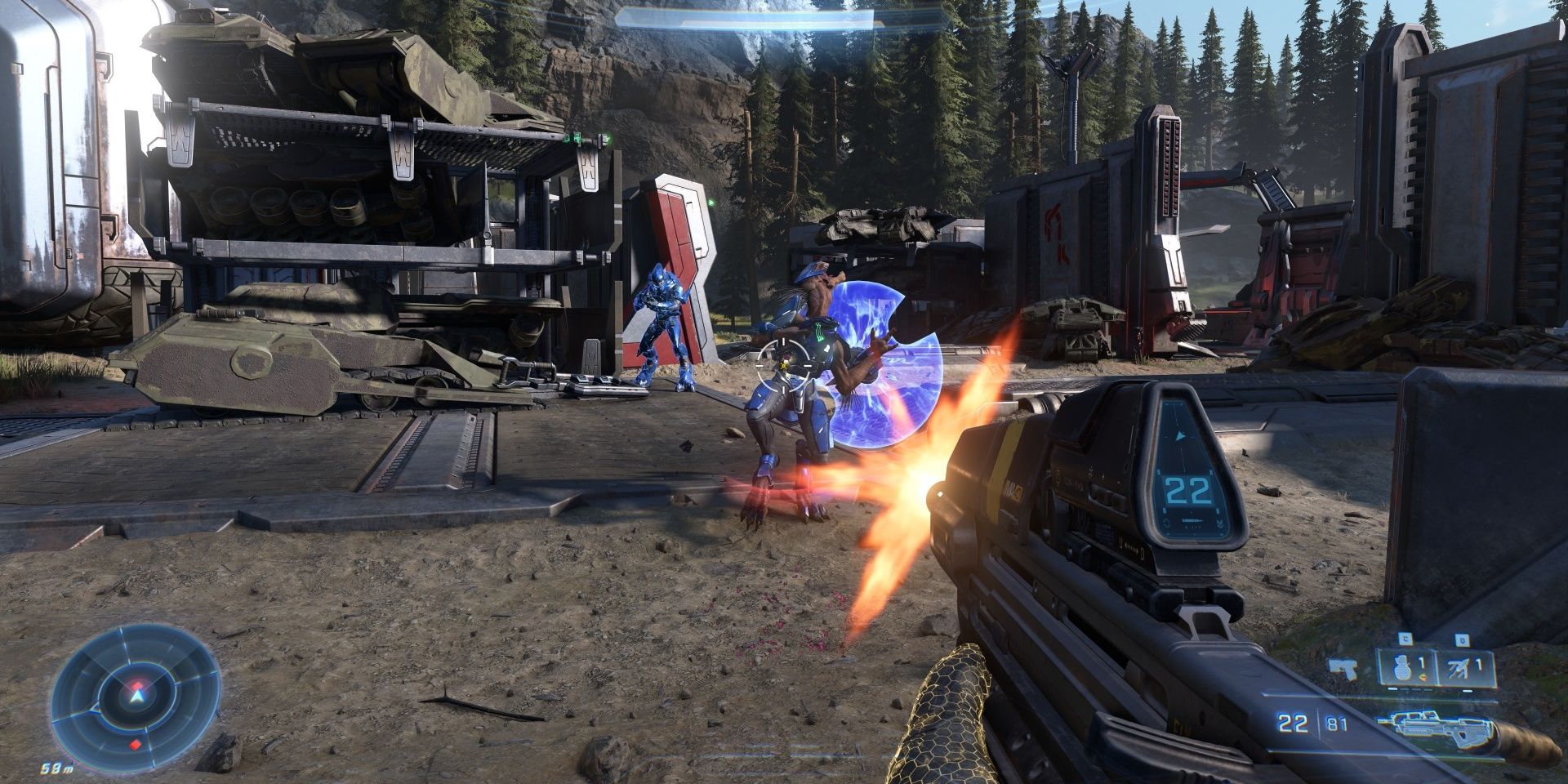 Known as the Kig-Yar, the Jackals are looked at as the middle tier of the Covenant and Banished ranks. Typically, Jackals use a plasma weapon along with a personal energy shield to block incoming attacks. If you concentrate fire on the shield long enough, it will eventually break and leave the alien vulnerable.

There are specialized Jackals that don’t carry shields, though they find other ways to be annoying. First introduced in Halo 2, the sniper Jackals are one of the most frustrating enemies to fight in the Halo series. These sharpshooters can melt the Spartan’s shields within one or two shots, leaving him vulnerable. However, these snipers are extremely weak without a shield and can be killed easily. 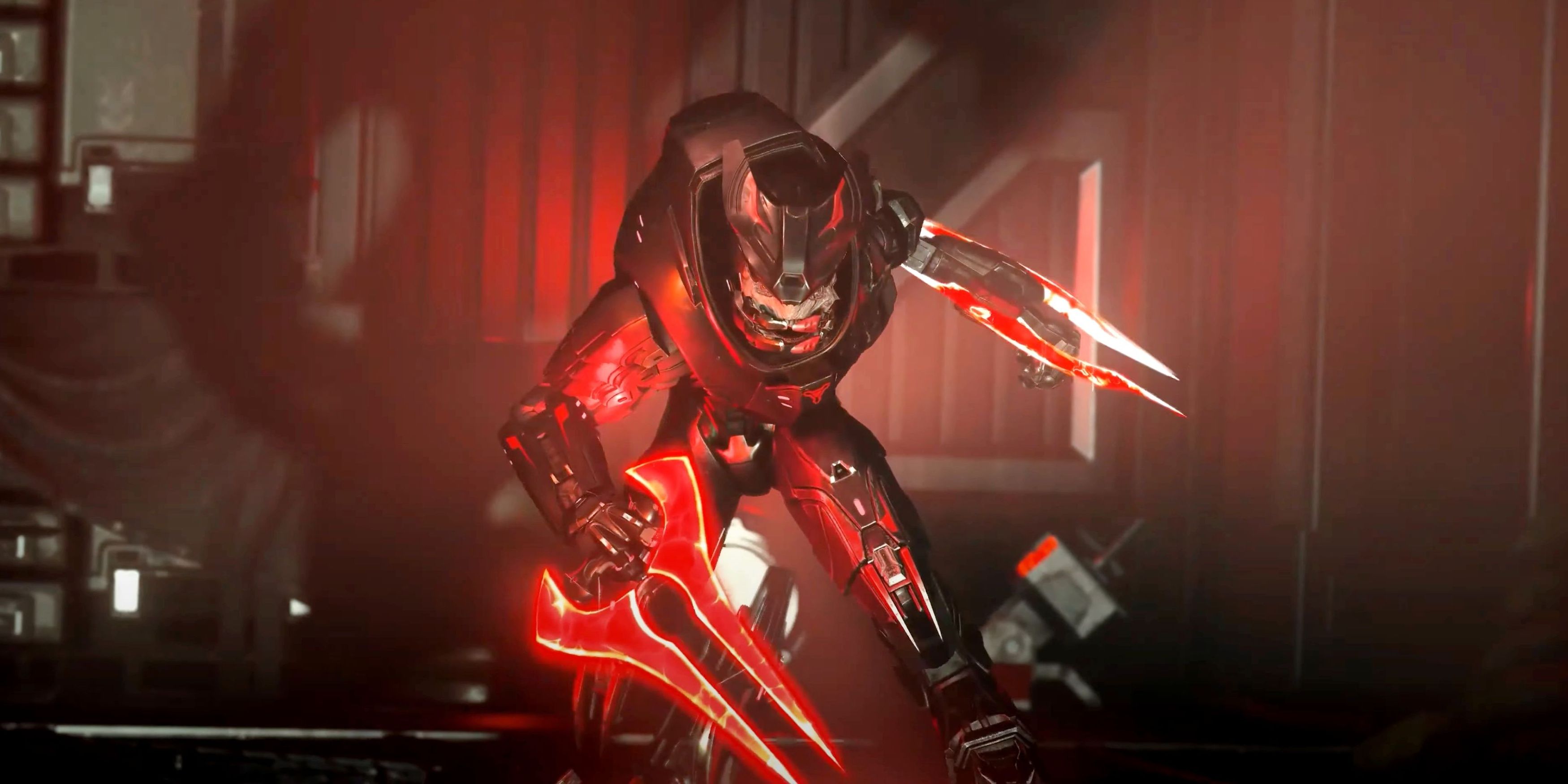 The backbone of the Covenant, Elites are brilliant war tacticians and deadly warriors who have done what many species have failed to do: kill Spartans. Otherwise known as the Sangheili, Elites are trained to handle all manner of weaponry, both Covenant and Human. The deadliest Elites are equipped with energy swords and can use active camo to stealthily advance on their adversaries.

The backstory of Elites was highlighted inHalo 2 with players assuming the role of the Arbiter opposite to Master Chief. It’s interesting to see Elites assume a more submissive and obedient role behind the Brutes within the Banished, as they were once the pride and joy of the Covenant army. Halo Infinite features one of Master Chief’s most formidable opponents in Jega ‘Rdomnai, Escharum’s right-hand and Spartan assassin. 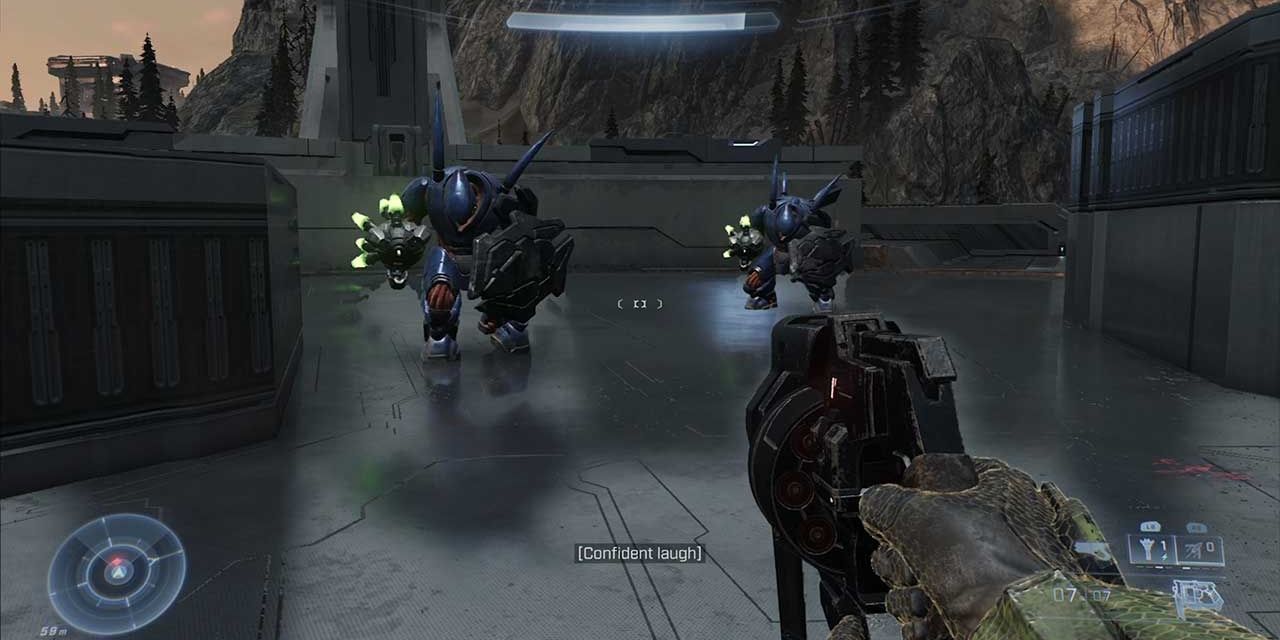 The giant blue (or sometimes red) behemoths that occasionally pop up in the Halo series are known as Hunters. Hunters, or Mgalekgolo, usually stand between 12 and 13 feet tall but drop down to about eight feet in combat to protect their exposed stomach and neck. Hunters are always deployed in pairs in order to give them an added advantage on the battlefield.

Hunters carry an indestructible metal shield that can protect them from virtually anything, so fighting them takes a bit more strategic thinking than most adversaries. Typically, they have a Fuel Rod Cannon attached to their arms, and in previous Halo games, Master Chief could equip one after defeating a Hunter, but it’s not possible in Halo Infinite. 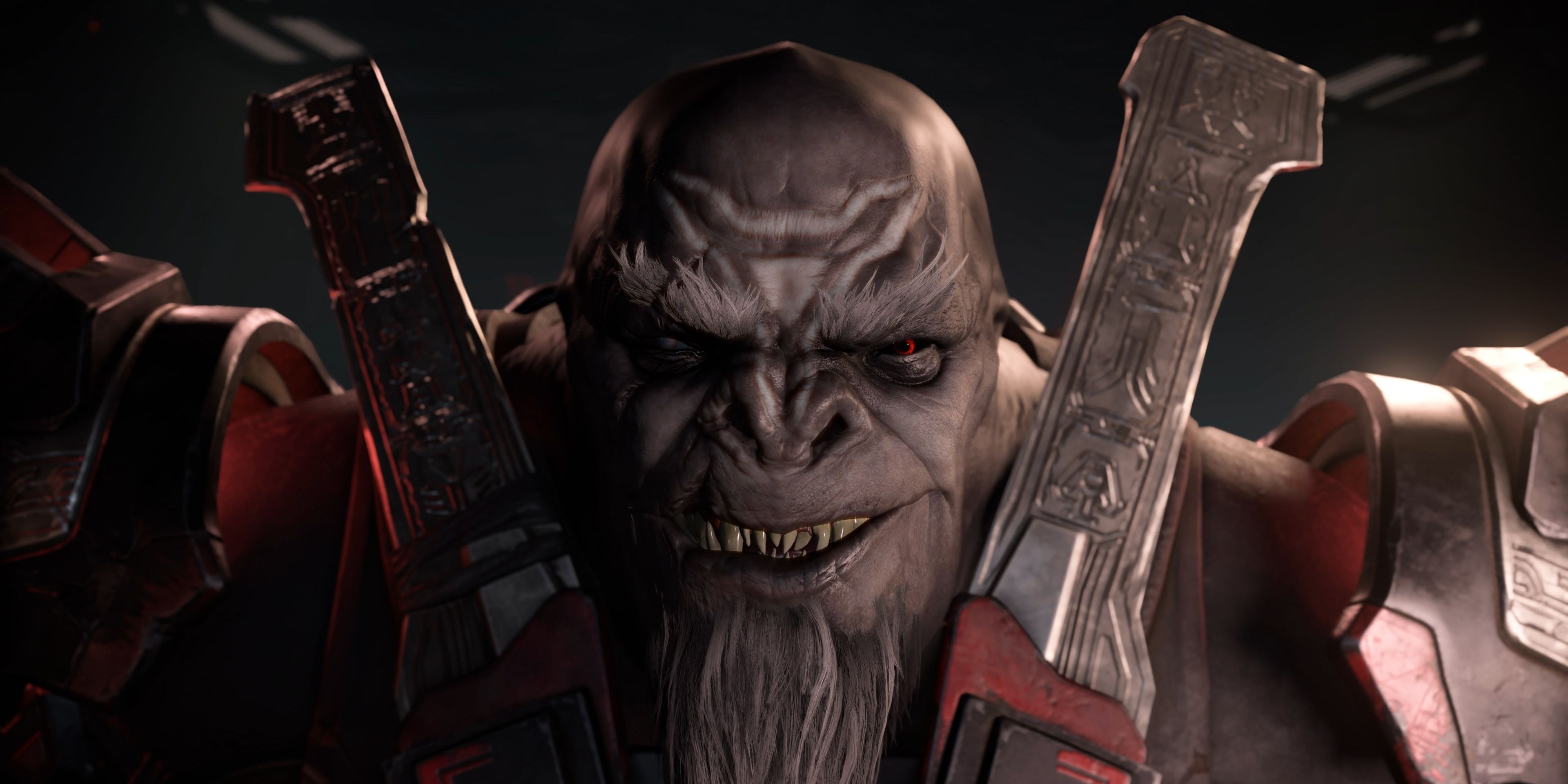 Brutes have remained a staple in the Halo series since their first appearance in Halo 3. Identified as Jiralhanae, Brutes are a tall, strong ape-like species that exhibit extreme aggression on the battlefield. In Halo 3, there was a seismic shift in the Covenant’s ranks that saw Brutes overtake Elites in the hierarchy.

In Halo Infinite, Brutes are the primary adversary, as Escharum leads the Banished forces. Most Brutes are equipped with basic armor and an assortment of Covenant and Human weaponry. There are higher ranking Brutes that carry Gravity Hammers or Spike Cannons, as well as more savage Brutes that exert tremendous power and speed in exchange for slightly less armor. 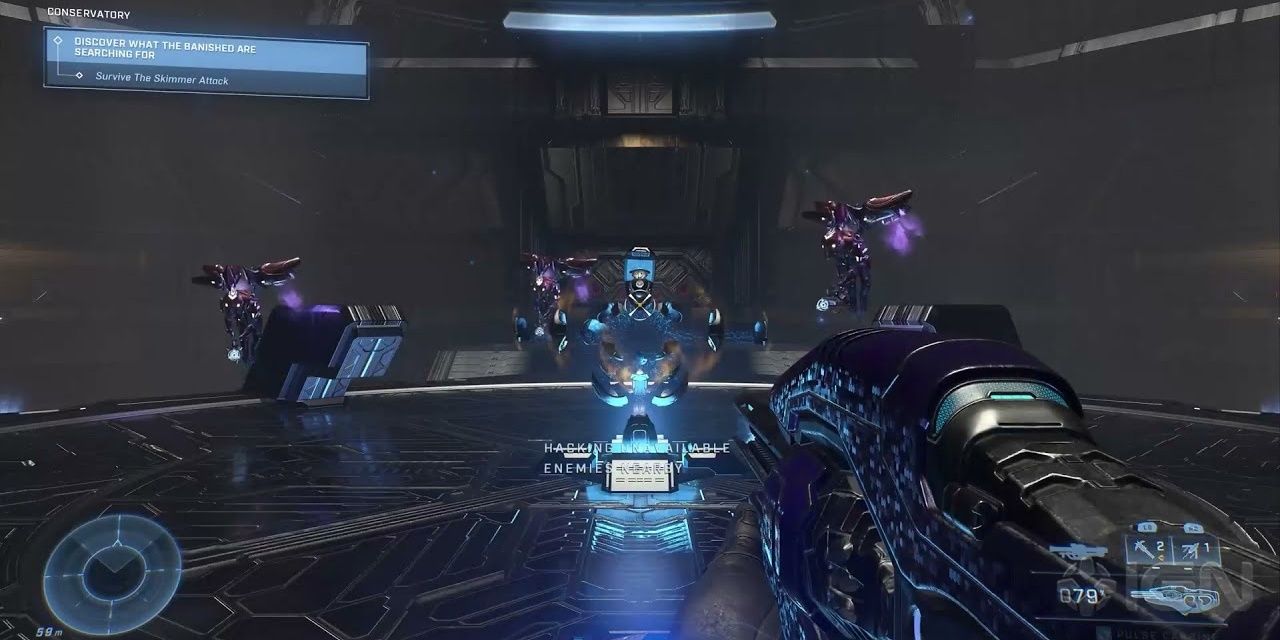 The newest enemy type to make an appearance in the Halo series are Skimmers. Otherwise known as Gasgira, Skimmers are an alien species that follow the Harbinger, which makes them an ally to the Covenant. If you can imagine how the flying monkeys in The Wizard of Oz would look like in Halo, well, Skimmers are pretty much exactly that.

In Halo Infinite, Skimmers use a variety of weapons but mostly Shock Rifles and VK78 Commandos. They typically travel in small packs, and even though they use Shock Rifles against Master Chief, they have no type of resilience to electricity. Skimmers don’t have very strong protective armor and are generally easy to kill, however they can be quite annoying if they’re left alive for too long.