The entire Hitman series has always challenged players to accomplish ridiculous hidden objectives. In the past, they could be as wild as sniping distant bells in a certain order or dressing up as a scarecrow and then scaring crows. Hitman 3 is no exception and IO Interactive has really outdone itself, especially when it comes to the redacted challenge in Dubai.

Unlike missions in the past, there’s only one redacted challenge on this map, but it’s so complex and confusing that it took a group effort from the community to figure out exactly how to check this box off. Thankfully, the riddle has finally been solved and this guide will detail the steps you should take to get “Flying Monkey Business” off of your back. 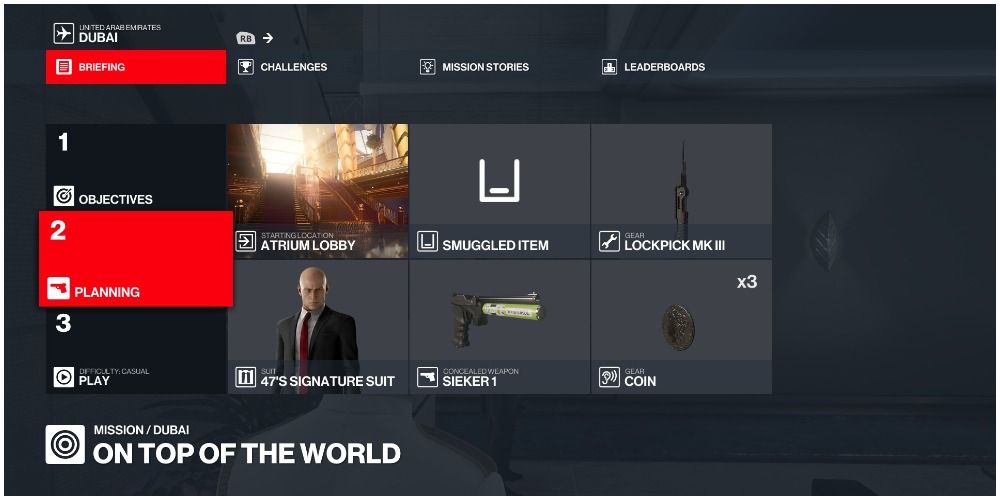 The big deal here is the Sieker 1. You can absolutely do this challenge without it so long as you’re OK with taking a few extra lives. Other than that, make sure you have the coins or another equally viable distraction. The rest is up to personal taste.

Get To The Bathroom 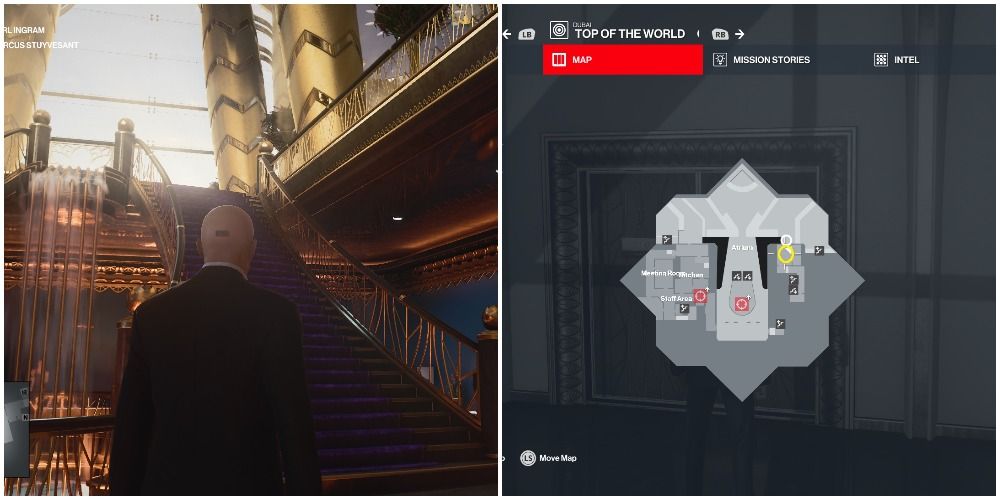 From your starting location, head up the stairs and go right. Your destination is the bathroom. Don’t worry, everything you do so far is totally cool, Agent 47 is permitted to use the bathroom. That’s where the illicit activities will start to take place.

Clear Out The Bathroom 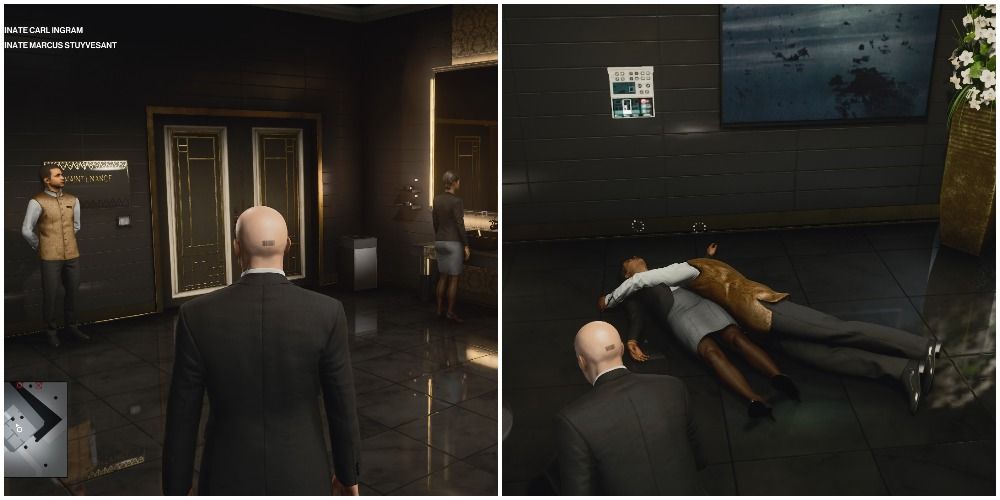 There are two individuals in the restroom: an attendant and a woman who can’t seem to get her face clean as she hovers over a running sink. You can just pop them both, but if you want to stay quiet, tamper with one of the restroom toilet panels, then subdue the attendant as he goes to investigate. This leaves only the woman to take care of, but she never turns around and makes for an easy subdue.

There aren’t any hiding places, but nobody uses the stall on the right, so drag the bodies in there. Pick up the attendant’s Burj Al-Ghazali staff keycard for any stubborn doors and don’t forget to turn off the toilet controls if you used them for a distraction.

Lure The Guard And Take His Uniform 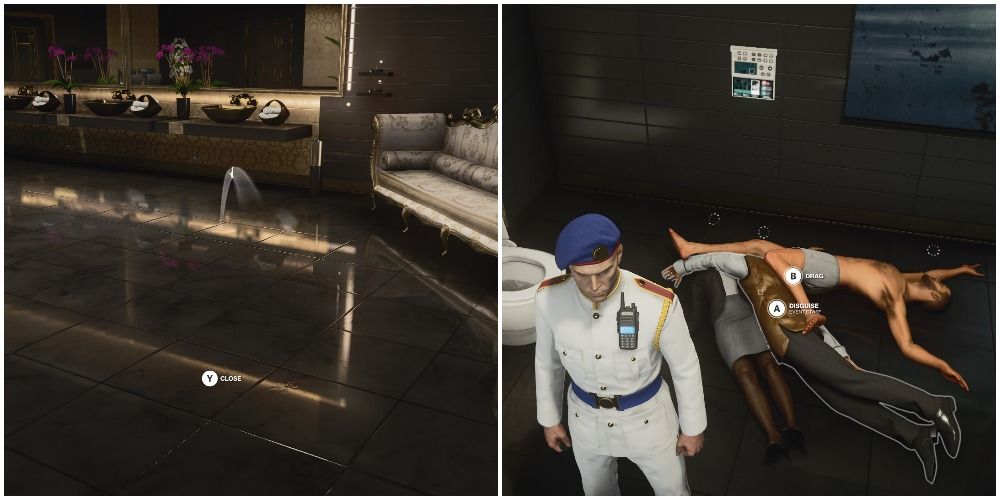 With the two occupants out of the way, it’s time to lure the guard inside from outside of the door. Open the door, tuck into a corner, and toss a coin in the middle of the room. The guard will come investigating. When the door shuts, subdue him, then drag him into the righthand stall so he’s not lonely while he’s unconscious. Put on the guard uniform and pick up the silenced pistol.

Get To The Security Room 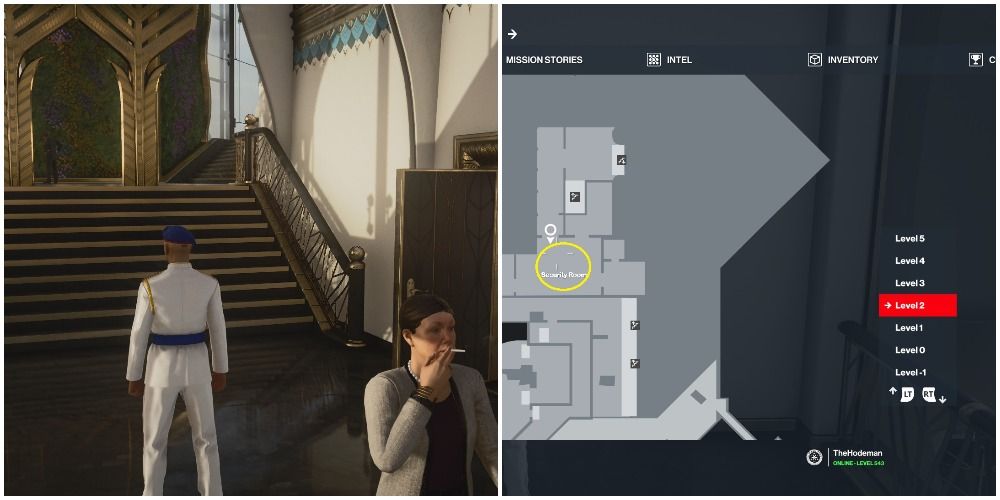 Exit the same way you entered, then head right up a short flight of stairs. You’ll see some guards frisking people on the right, but, thanks to your snazzy outfit, you’re exempt! So head past them, up the stairs they are guarding, and into the Security Room on the second floor.

Get The Banana And The Evacuation Keycard 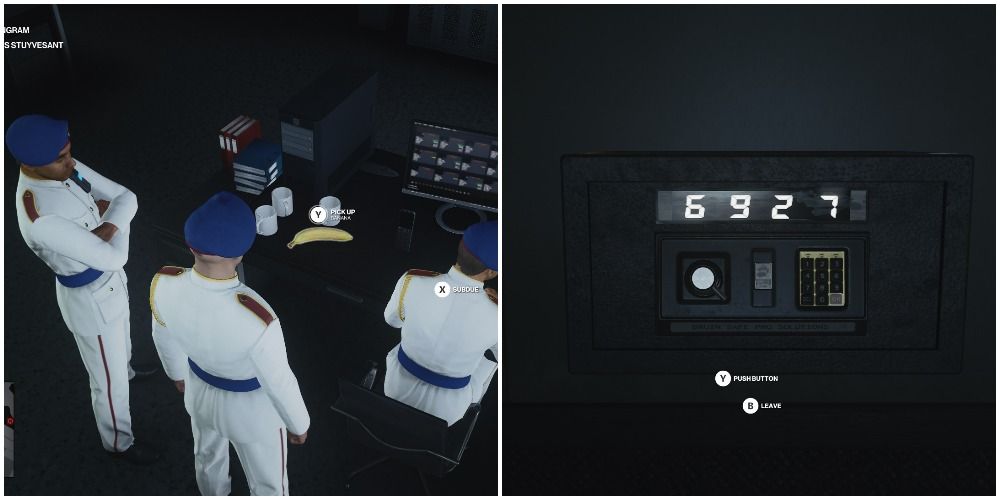 The banana is located on a desk in between some chatty guards. Apparently, neither one was interested in the banana and you’re free to grab it from right in front of their noses. The safe in the room holds the evacuation keycard and the code is 6927. Grab the card.

Leave The Room And Head Upstairs 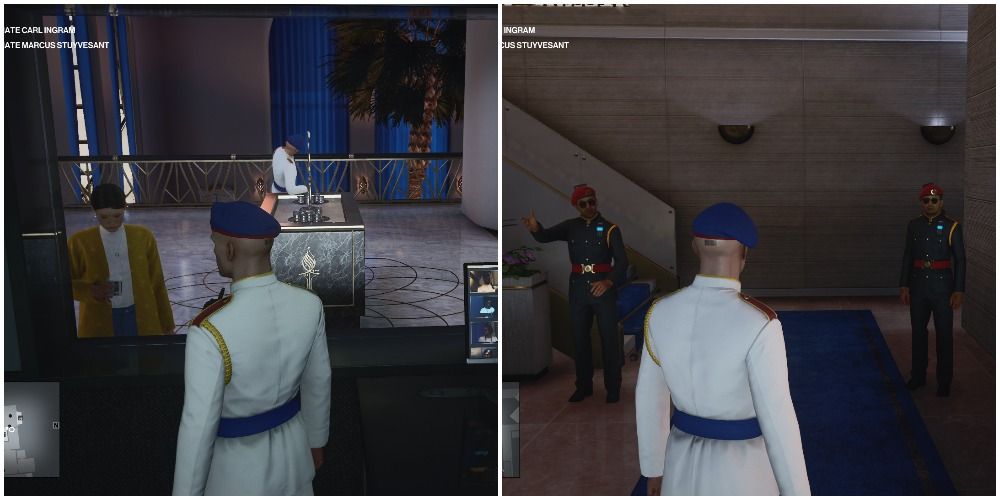 To leave this room, jump out of the window by the assistant with the yellow dress. You can leave by picking the lock, but it takes longer and it’s an illegal action. After this, make a lefthand u-turn and head up the stairs where two elite guards are blocking another stairway.

Make A Guard Sick And Take His Uniform 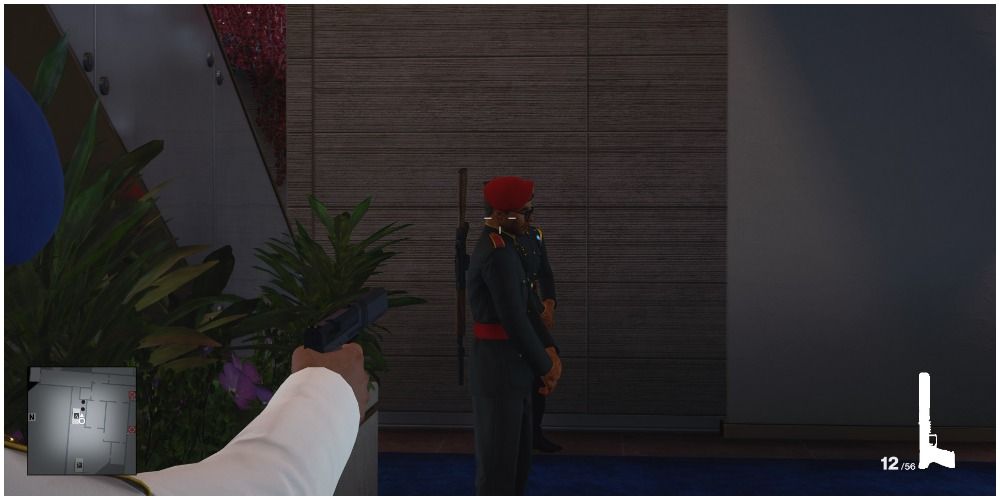 If you’re OK with getting a little messy, you can easily shoot both guards from the corner here. Nobody uses this stairway, so you’re free to engage and leave the bodies; they’ll be spotted, but not in enough time to catch you. But if you have the Sieker 1, you’re in for a non-violent treat. 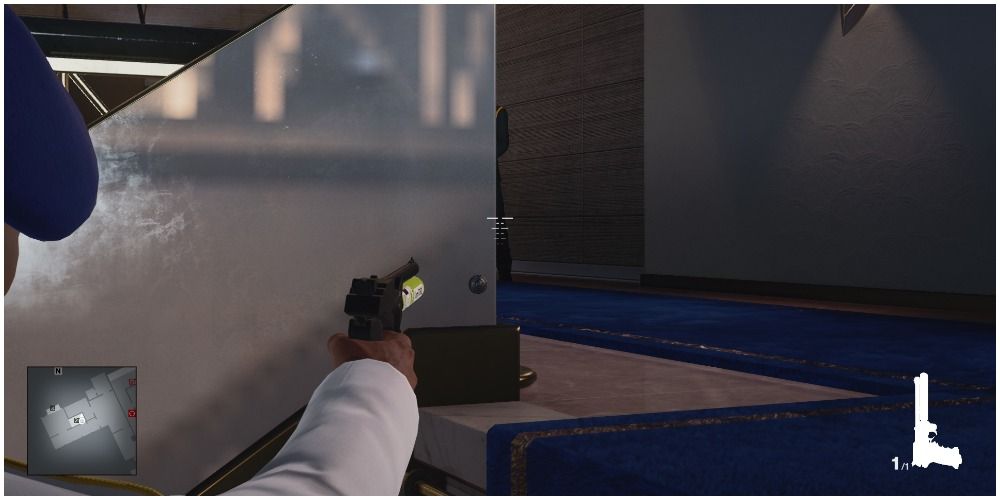 The guards will react violently if they see you aiming a gun, even a non-lethal one, at them, so use the guardrail as cover and aim for the left leg of the guard on the right. He’ll get nauseous and head off to the exact same restroom that you pacified everyone else in.

He uses the left stall to puke, so the bodies you hid on the right won’t interrupt him. Subdue him, leave him in the left stall, take his uniform, and go back to the other guard who no longer suspects a thing. 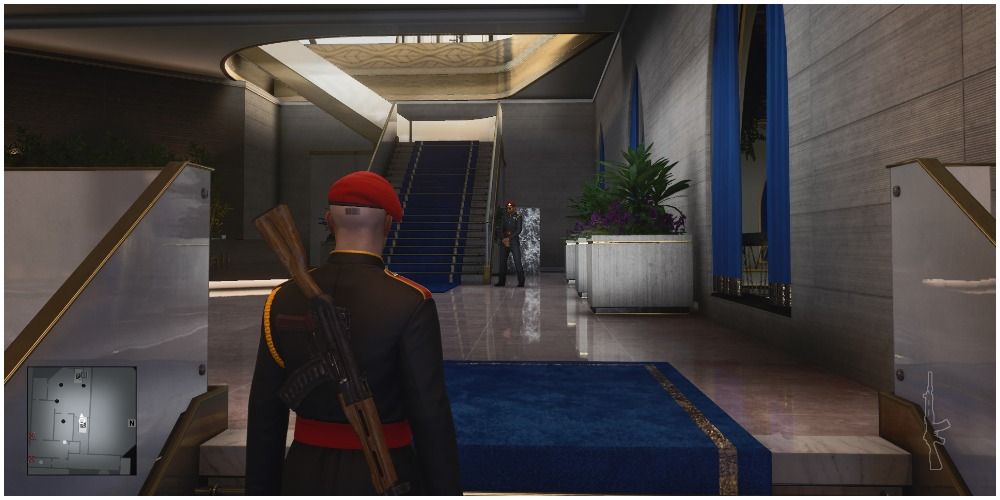 Go up the stairs that the two guards were guarding and then up the stairs straight in front of you. You’ll be in an open area. Cross the room and exit to a scenic rooftop. You’ll know you’re in the right place when you see a green driving range. 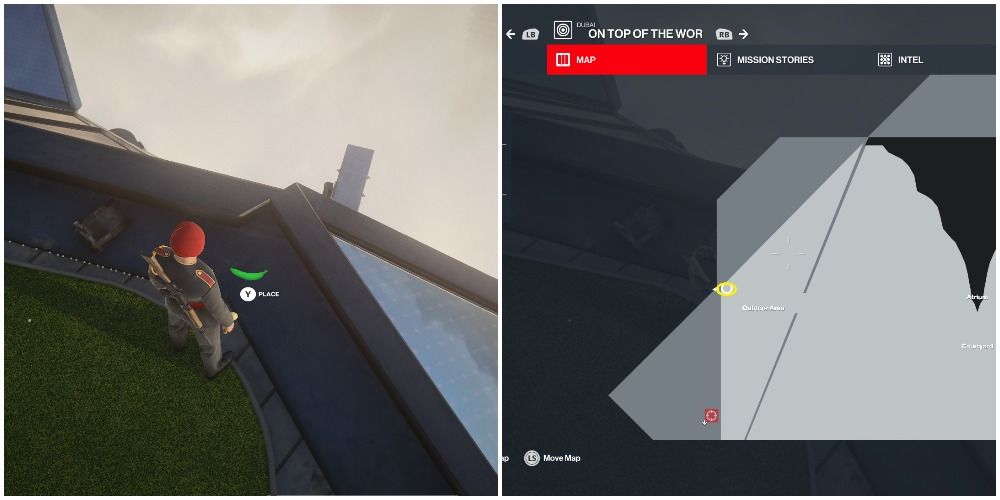 It’s critical that you do not throw the banana down. You must place the banana so that it looks like the classic banana peel (for controllers, this happens by pressing R1/RB and L1/LB at the same time). The correct location is in the corner of this balcony. 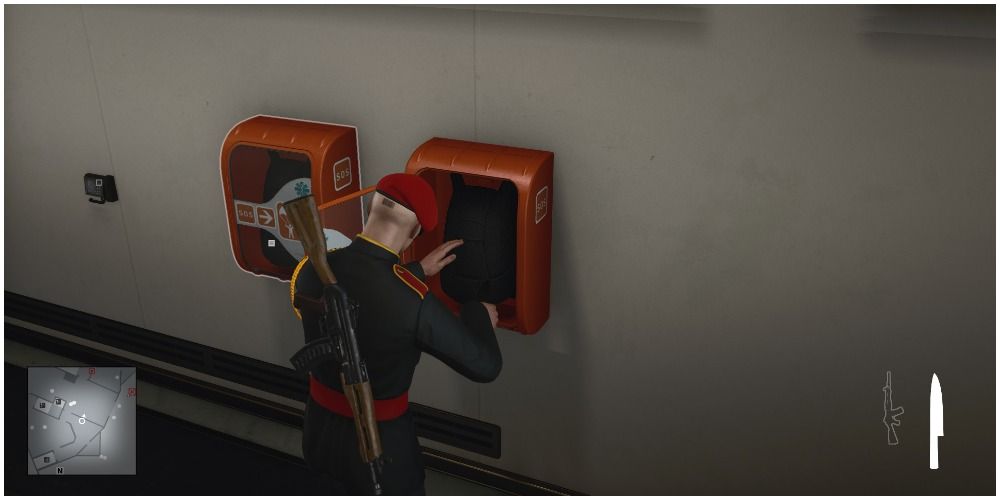 This is a bonus step if you’d like to kill the targets in addition to getting this achievement. On this same floor, go to the dining room and pick up a kitchen knife (it’s a legal action). Then go to the lower keycard reader in the next step and cut the parachutes before swiping the card. This action is highly illegal, so make sure the guards have wrapped up their conversation first! 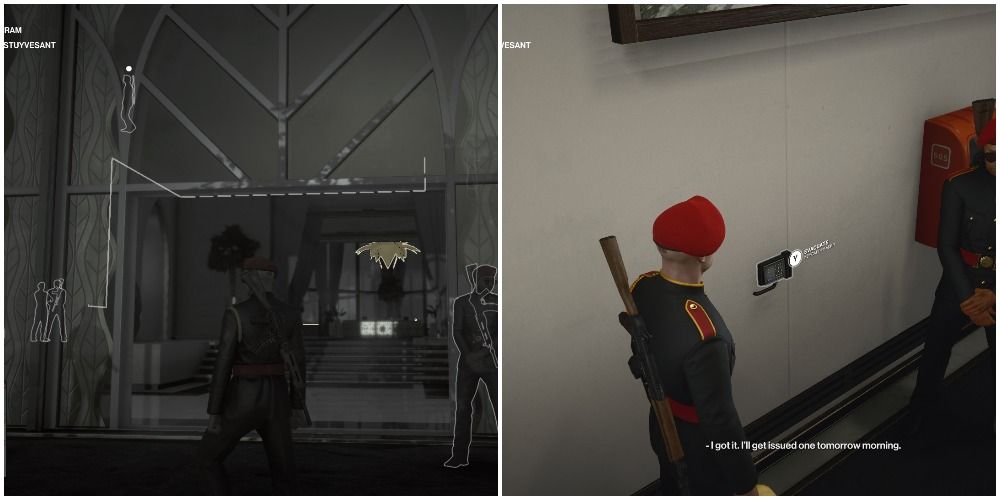 Head back indoors and turn on Agent 47’s instinct. You’ll see a whacky line connecting two points. Each of these points has a keycard reader for you to swipe the evacuation keycard from earlier. There is a timer, but if you fail to get between them in time, there is no limit to the number of attempts you can make.

Now it’s just a matter of time! If you’d like, wait outside and watch the hijinks ensue. There is an exit at the exact point that the two targets just jumped from. Congratulations!