Splatoon is a strange beast. It’s a third-person shooter, except the more I play, the less it is. It’s a painting game, it’s an action-oriented iteration of Chicory. You get more points – and crucially, more wins – for your paint coverage than you do for getting kills. Or at least that’s how it seems. Nothing is ever really explained in Splatoon. The game assumes you’ve played the previous two entries, which I haven’t, and therefore understand the game modes, which I don’t.

This makes for an incredibly abstruse experience, as I completed Turf Battle after Turf Battle in order to unlock some guns and buy some gear. When I finally hit level 10, the point at which ranked mode adds more variety to the playlist, I was thoroughly burned out of splatting squids and spraying paint. I was practically playing Splatoon like Animal Crossing, logging in every day to check the stores, hit my daily cheap gacha, kit out my character, and decorate my locker.

I left Splatoon well alone for a few days, focusing instead on leveling up my Temtem and getting annoyed about a card game that I’ll never play. But when I returned, I remembered that I’d ordered a cool shirt that I’d spotted a fellow Inkling wearing. So I approached Splatoon’s resident wheeler-dealer, Murch, who I can only assume steals the clothes right off Inklings’ backs when you order them, readied my wallet, and – 50,000 coins? You can’t be serious. 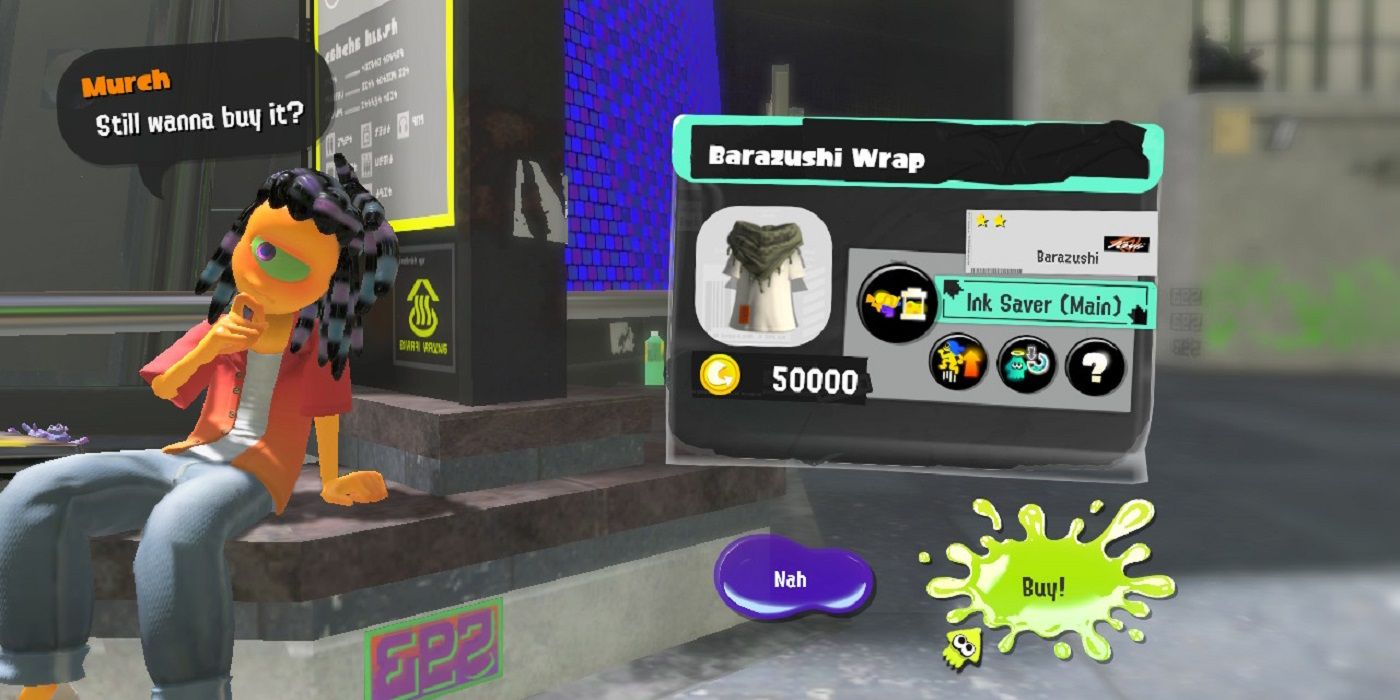 I thought I was well-prepared with my 20k of currency, but I was nowhere near. The shirt was cool, an edgy white affair with slapdash patches, accompanied by a bandana around the neck. It’s a bit Mad Max, a bit cowboy, a bit Cyberpunk streetwear. I’m no fashion expert, look at the pictures if you want to see it.

I strongly considered not buying it, but then I saw the abilities. It’s not just a rugged shirt with a cool bandana, it’s also stacked with four slots. My current shirt, which is quite a cool ‘90s hoodie, only has two slots for abilities. The new gear also came equipped with Ink Saver (Main), my favourite ability as it decreases the number of times you need to reload, which can be crucial in a firefight. Much better than my vintage clobber’s Thermal Ink. The expensive shirt is simply better in every way, even if I probably prefer the retro ‘90s look.

So, I decided to grind. The shirt would leave old Murch’s grubby little tentacles by the end of the day, and it was already 8pm. Was it doable? Yes. In theory. Would it be enjoyable? I doubted it. 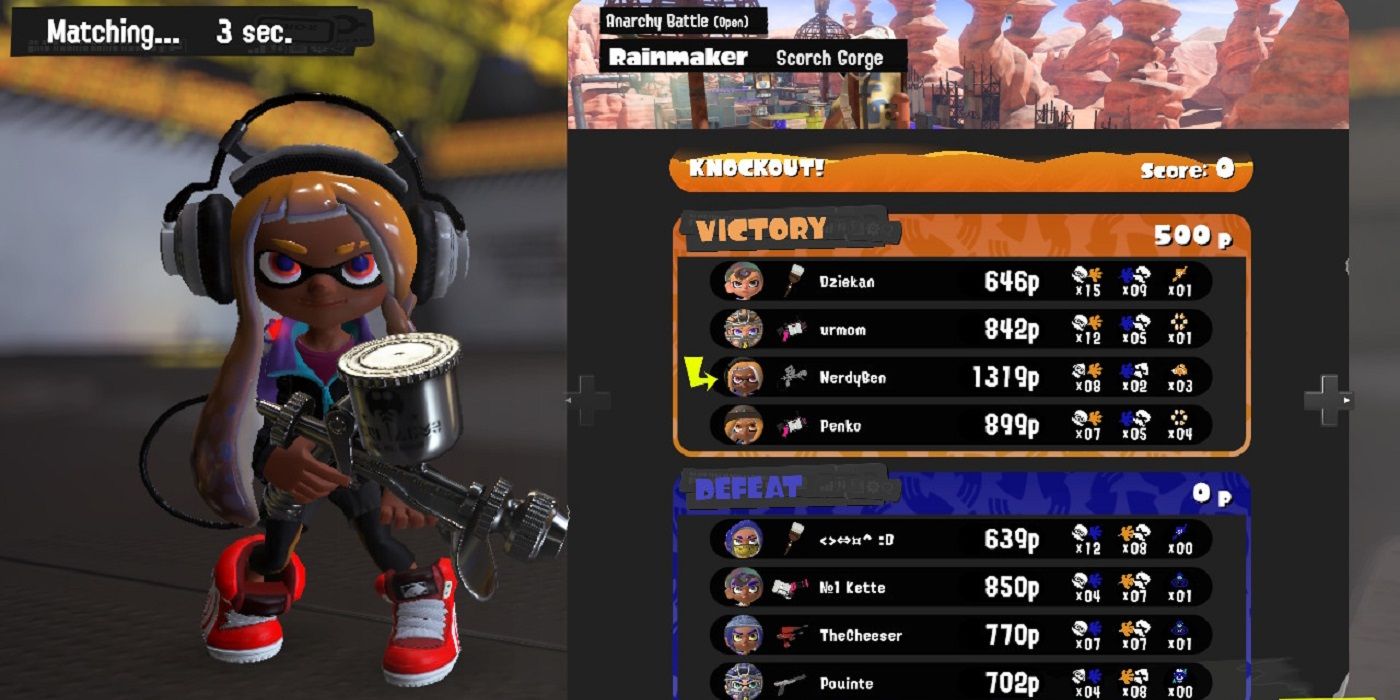 30,000 SplatCoins (Splatoins? Sploins?) in about four hours. I quickly ate a salad, which gave me an XP boost, but didn’t have any tickets for the crab meals which would have boosted my earnings. I jumped into a couple of Turf Battles initially – I hadn’t tried ranked play yet, but I wanted to ease myself in.

After a couple of quick wins, I tried my hand at ranked, which is for some reason known as Anarchy Battles. While none of the game modes are explained before you play them, at least they’re varied. Once you work out what each mode requires, there’s actually far more focus and less anarchy than Turf Battles. There’s an escort mission that focuses more on kills than painting the floor (why does the platform stop randomly? It’s never explained), and Rainmaker, which requires you to capture a golden, shooty flag and advance with it to the enemy’s base. I obviously didn’t realise this at first, so focused on getting kills with the Rainmaker, which promptly exploded in my face. We still won though – thanks, teammates. 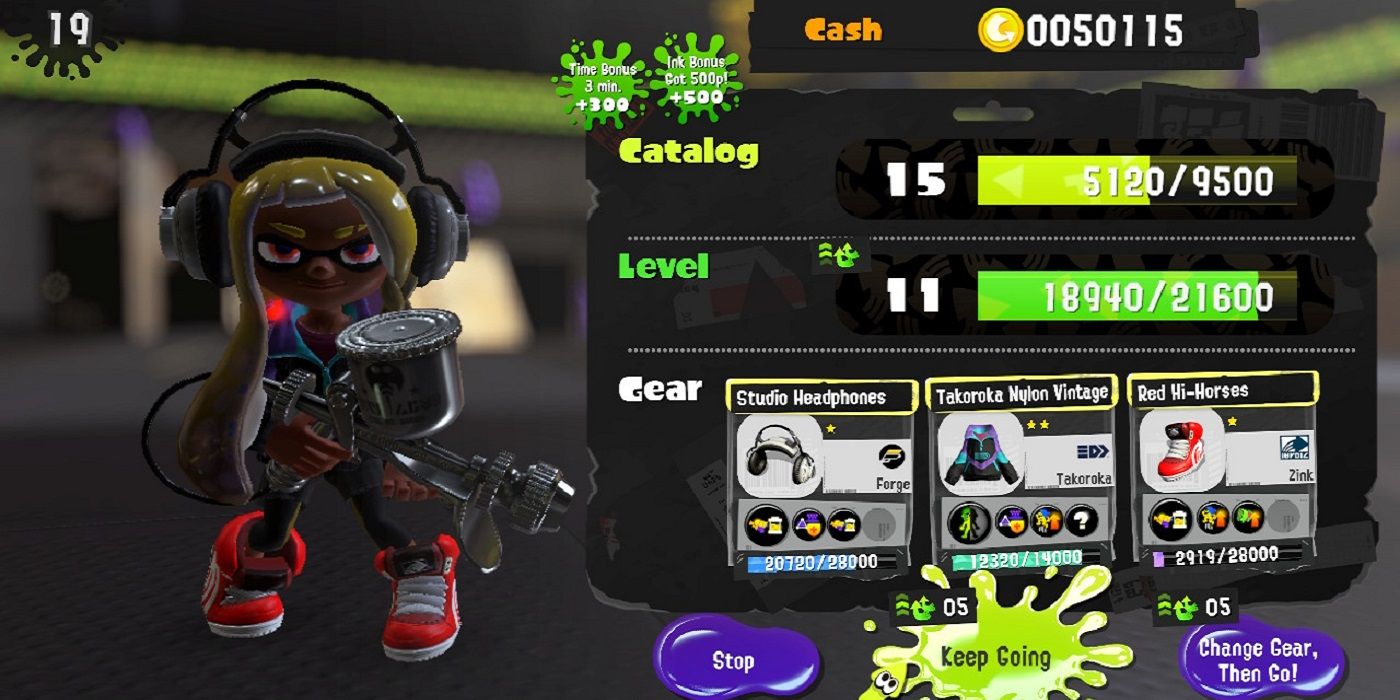 Before I knew it, I’d spent two hours in Splatoon’s Anarchy Battles. My hands were cramping from the Joy-con and my rank was still C- (but slowly climbing), but most importantly, I had acquired 50,000 of your finest Sploins. I handed them over to Murch in exchange for some poor Octoling’s finest garms. I equipped it immediately, closing my eyes to ignore how much less cool my squid looked, and jumped into another Anarchy Battle. That was when the realisation hit me. At some point during my late-night grind, I’d started enjoying Splatoon. It may have taken me a little over 10 hours, I may have been forced into it by an overpriced cosmetic, but Anarchy Battles had their hold on me.

In my time getting to know Splatoon, the game has been abstruse and uninviting, almost willing me to turn it off because I haven’t played the preceding titles. The only thing keeping me going was a vain attempt to get my money’s worth after paying 50 quid for the splattery shooter, as well as a fear of missing out on an experience many of my friends were clearly loving. It seems appropriate then, that the thing to get me really involved in the game was wanting another expensive item, and the time limit Murch imposed on me. I didn’t want to miss out on the shirt, and that led to me enjoying my Splatoon matches for the first time. Will it last? Who knows, but for the moment you can catch me in the Anarchy arenas.