I’ve been hoarding code cards from Pokemon TCG packs for more than a year. Ever since Fusion Strike replaced the old Online cards with the new TCG Live version that claimed you could “Play Today” last November, I’ve held onto them until the day that would finally be true.

As much as I loved hustling in the old PTCGO trading market, I knew my stack of codes would be better served putting TCG Live’s new crafting system to the test. That day has finally come, and I’m afraid I have some bad news.

Here’s the gist of it: 600 codes were entered, 6000 cards were unpacked, and once all my extras were converted into credits – TCG Live’s crafting resource – I accumulated a total of 5,435. To put that number into perspective, each basic V card costs 750 credits to craft, while VMAX and VSTARs cost 1,025. A full playset of a single evolutionary line, meaning four V and four VMAX/VSTAR that you could put into a deck, costs 7,100. After 600 packs – or $2,400 worth of real packs – I’m still 1,665 credits short of one VSTAR playset, which wouldn’t even complete a top-tier deck on its own. Not by a long shot.

The deck that won the Pokemon World Championship Series this year, Ondřej Škubal’s Flying Pikachu/Arceus deck, contains 18 V, VMAX, and VSTAR cards. Among the top 10 decks used in the tournament, only one, Origin Forme Palkia, uses fewer than 10 V cards. These decks are expensive, but physical card players don’t rely on opening packs to get what they need, they just buy singles.

Because Pokemon expansions are so overly bloated with cards, it’s almost impossible to build competitive decks from just the cards you find in packs. Even if you open 600 real packs, it's very unlikely you’ll find four copies of Arceus VSTAR, when the odds of opening a specific VMAX/VSTAR card you need is 1:259. Instead, players just buy the individual cards they need from card shops and online markets. In TCG Live, you can’t just buy the cards you need, so the only way to obtain individual cards is to craft them with credits earned from opening at least five copies of the same card. 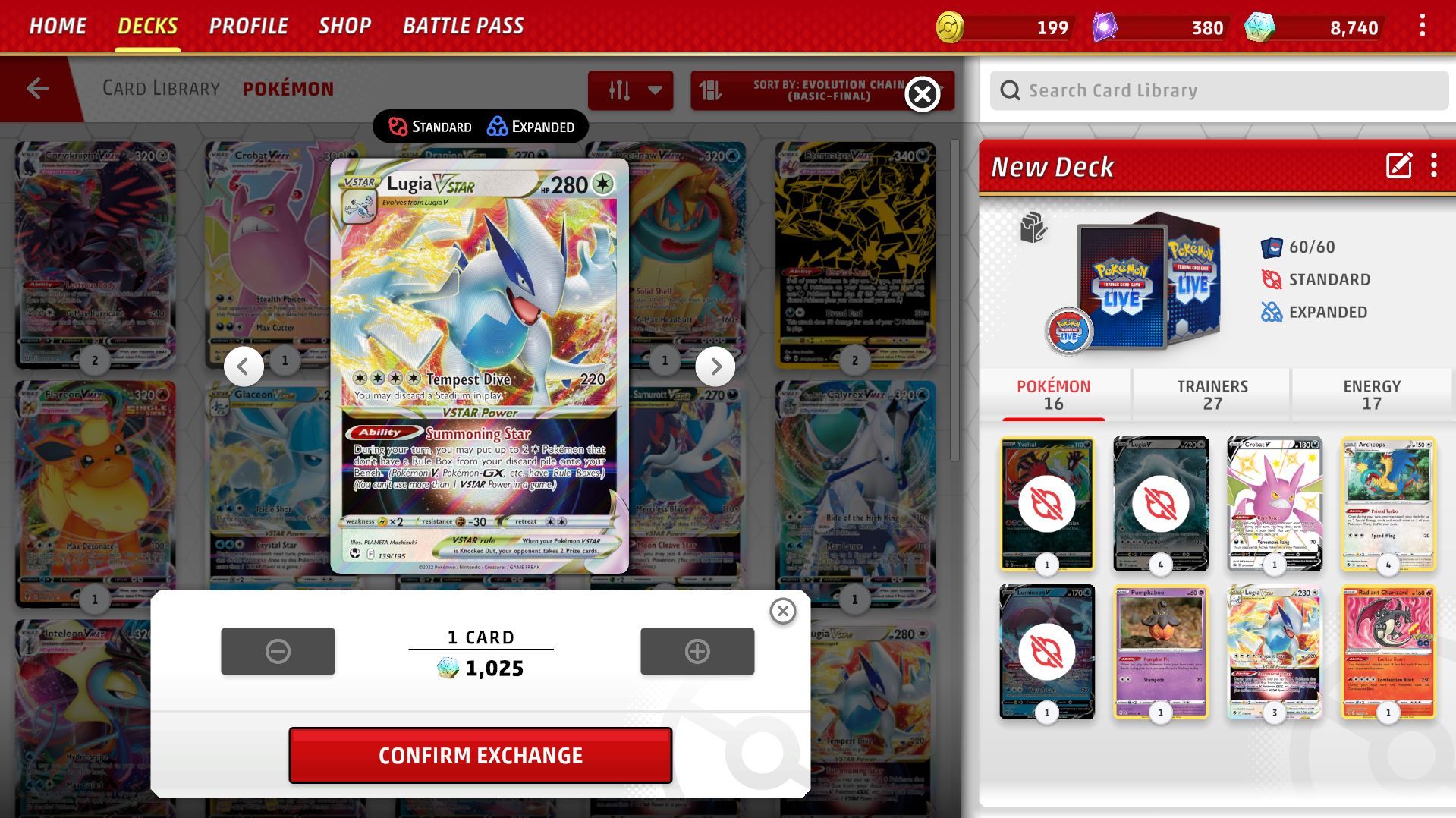 The problem is the TCG Live is emulating the physical trading card game, but it’s no longer a TCG. It's a CCG, or collectible card game. TCG and CCGs have drastically different economies due to the power and availability of the secondary market. In other digital CCGs, even the ones that are adapted from TCG like Yu-Gi-Oh, players can obtain the cards they need to build multiple competitive decks for a reasonable cost, or even for free if they invest the time. But the way Pokemon is designed, you can open hundreds of packs and collect dozens of beautiful holographic, rainbow, and golden cards, and it’s highly likely not a single one of them will be playable.

To be fair, code cards aren’t the entire story of TCG Live’s economy. You get ten pre-constructed decks for free that all have V cards in them, and you can swap cards in and out of these decks to improve them. You also get credits for doing daily challenges, leveling up, and earning battle pass levels, which are all free. Just by reaching Level 5 and climbing to the second tier of the battle pass, my credit balance jumped from 5,435 to 8,900 – nearly double. If you complete all 50 tiers of the battle pass over the next nine weeks, you can earn an additional 4,500 credits. By then, I might be able to craft one competitive deck – one of the cheaper ones, at least. You do get a full set of Lugia VSTAR on the battle pass, which can be used to create what is widely considered the strongest deck in the meta today. Already there's a lot of Lugia decks on the ranked ladder.

Additionally, my code cards came from a wide variety of Sword & Shield expansions. Had I redeemed hundreds of codes from the same expansion, my credit total would be a lot higher, since I’d be finding a lot more duplicates. Players in the early beta discovered quickly that smaller sets, like Celebrations, had a lot more value, since you don’t need to open as many packs to find lots of duplicates.

Unfortunately, there's a 400 pack cap on every expansion now, so there’s only so much duplicate farming you can do. Items from boxed product like coins and promo cards are a more reliable way to get duplicates, but TCG Live limits these to only four redemptions total. Not only is it exceedingly difficult to earn credits, but The Pokemon Company is also actively restricting any possible way to game the system.

Of course, you don’t need the most powerful competitive decks to play and enjoy Pokemon. I’ve been playing with the preconstructed decks and have managed to win quite a few. As my rank increases, I’ll surely start to see more powerful decks from players that have invested a lot more than me, and soon enough I’ll hit that pay-to-win ceiling. Such is the reality of card games (Marvel Snap withstanding), but it feels especially bad here, given how much I’ve invested in packs already.

I love collecting Pokemon cards and filling binders with rainbow rares and alternate art beauties, but I came to TCG Live to play, not to collect. All those packs I opened gave me thousands of cards, including 113 V, VMAX, and VSTAR cards – almost all of which are useless in a competitive setting. When I get a shiny piece of unplayable cardboard, I’m not bothered by it – partly because I know I could always sell it and buy a good card if I wanted to. But when I get shiny unplayable digital cardboard, I just don’t even know what the point is.