Even as the hype around quantum computing continues to build, plenty of skeptical voices have emerged questioning the lofty predictions and growing venture capital pouring into the sector. In an attempt to cut through that debate, IBM has published a quantum computing development roadmap intended to bring some clarity while also reinforcing its belief that this emerging technology will have a major impact.

IBM believes it has an achievable timetable to advance its quantum hardware to reach the power and reliability that will allow for commercial applications within 5 years. The challenge then is enabling the tools and the environment to let companies and developers start experimenting with writing the applications that will allow them to harness this power.

“Nobody is using quantum computing commercially yet,” IBM vice president of quantum ecosystem development Bob Sutor said. “That will follow mid-decade or so. But it’s not something you can wake up and just suddenly be an expert in overnight. So typically, what you see is that the leaders in the field will move to new technology and they start experimenting with it to develop that expertise.” 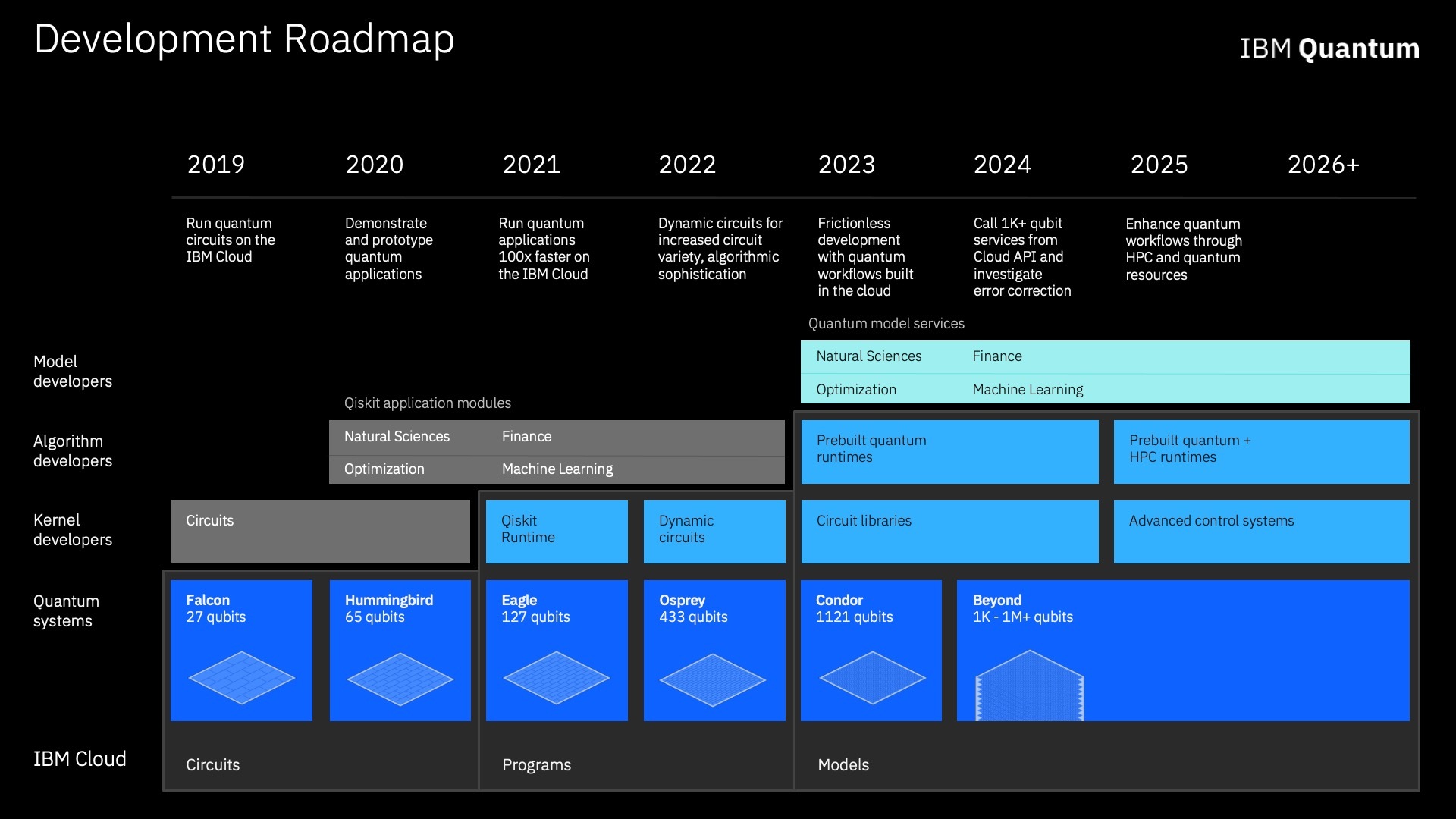 IBM has been among the most aggressive in trying to build momentum for quantum computing. In 2016, the company launched the Q Network, which allows companies to begin experimenting with quantum computers via the company’s cloud service. According to Sutor, the Q Network now has more than 135 organizations, including corporations such as JP Morgan Chase and Exxon, as well as universities and startups.

According to IBM’s quantum hardware roadmap, the company expects to achieve 100 qubits (the measure of a quantum computer’s processing power) this year, 400 qubits next year, and 1,000 qubits by 2023. While there are still major scientific hurdles to clear to make quantum computing superior to classical computing, Sutor said IBM is in a strong position to overcome them.

“This is significant because it represents that we have now the scientific and engineering confidence that we’re able to break through only having small systems to get to the larger systems that we are going to need to have quantum computing be useful to do things better than just classical systems can do,” he said.

That has brought greater focus to the question of what companies will do with this new computing power and how to bring them along. Part of that involves setting expectations.

Sutor said quantum computers will work best for offloading certain specific tasks. Among the most promising areas where quantum can bring more powerful calculations are natural sciences and chemistry, problem optimization, and some parts of artificial intelligence. In these scenarios, it’s possible to imagine a developer is running an application on their laptop but at a specific stage sends a request across the cloud to a quantum computer to perform a calculation which is then returned to that laptop.

To make the quantum portion of that equation more accessible, IBM has created an open source quantum programming framework called Qiskit. Sutor said that Qiskit will help speed up computation for applications by 100 times.

To leverage Qiskit, IBM is also trying to enlarge the pool of developers who can write applications for quantum computers. So IBM has been making a big push to train and expand the talent base of people who have a working knowledge of how to code for quantum.

The company started with a free online course expecting about 200 attendees. Instead, it drew 4,000 developers. And then IBM partnered with a coding school to create a program for 5,000 students. When 10,000 developers tried to register, the partners agreed to expand it to 6,000 attendees. Much of this teaching material is now also available on YouTube.

“We’re raising the first generation of quantum-native developers,” Sutor said. “These are people who are learning quantum computing at the same time they’re learning how to code.”

That growing developer community will, in turn, allow more companies to begin laying the groundwork for their own quantum strategies.

“If you’re a software developer, with this roadmap, you can decide where and when you should jump into quantum,” Sutor said. “This is obviously extremely important because developers are people who will be creating the software for all of us. And on the other hand, if you’re looking at this from a company perspective, they’re saying, ‘When will quantum be powerful enough to be relevant to me?’ And they’ll turn to developers for answers to that question. This roadmap should give them confidence that we will continue on a pace of very aggressive developments.”

Argos PS5 stock back today but it could...