Intellivision Entertainment showed off the hardware design of its Amico retro game console, complete with a new Qualcomm Snapdragon processor.

The curvy, wedge-like console was designed to be friendly and accessible, not aggressive or scary, said Tommy Tallarico, CEO of Intellivision, in a presentation today. In that way, it isn’t designed for hardcore gamers who represent a more limited audience. It was designed to be something you could use right off the bat.

“We’re all about family play,” Tallarico said. “We wanted to create something that personified Intellivision and what our mission was all about.”

Tallarico had originally wanted to launch the console today, on 10-10-20 at 10:10 a.m. But he postponed the launch until April 2021, as the pandemic slowed the company’s progress on design and progression. And it gave the company more time to have everything ready for the launching, including 30 games that are coming for the machine. Still, Tallarico made the hardware design announcement on the date, which coincides with his deceased sister’s birthday. The stream started out glitchy, and Tallarico apologized as he tried to fix it.

Tallarico didn’t say exactly which Snapdragon model the machine would use. That’s an important missing detail, as it will reveal the performance of the device.

Above: Tommy Tallarico is CEO of Intellivision Entertainment.

“That’s the heart and soul, the thing that powers the Amico,” he said.

The original Intellivision was a game console from Mattel that gave Atari a run for its money in the early 1980s. It was more advanced than the Atari 2600, with better graphics, and it even had simple voices in some games. Tommy Tallarico, the creator of the Video Games Live concert series, announced in 2018 that he had acquired the rights to the console and its original games, and he planned to relaunch Intellivision as a retro brand. While touring, Tallarico said he learned how important lighting was to an entertainment experience. 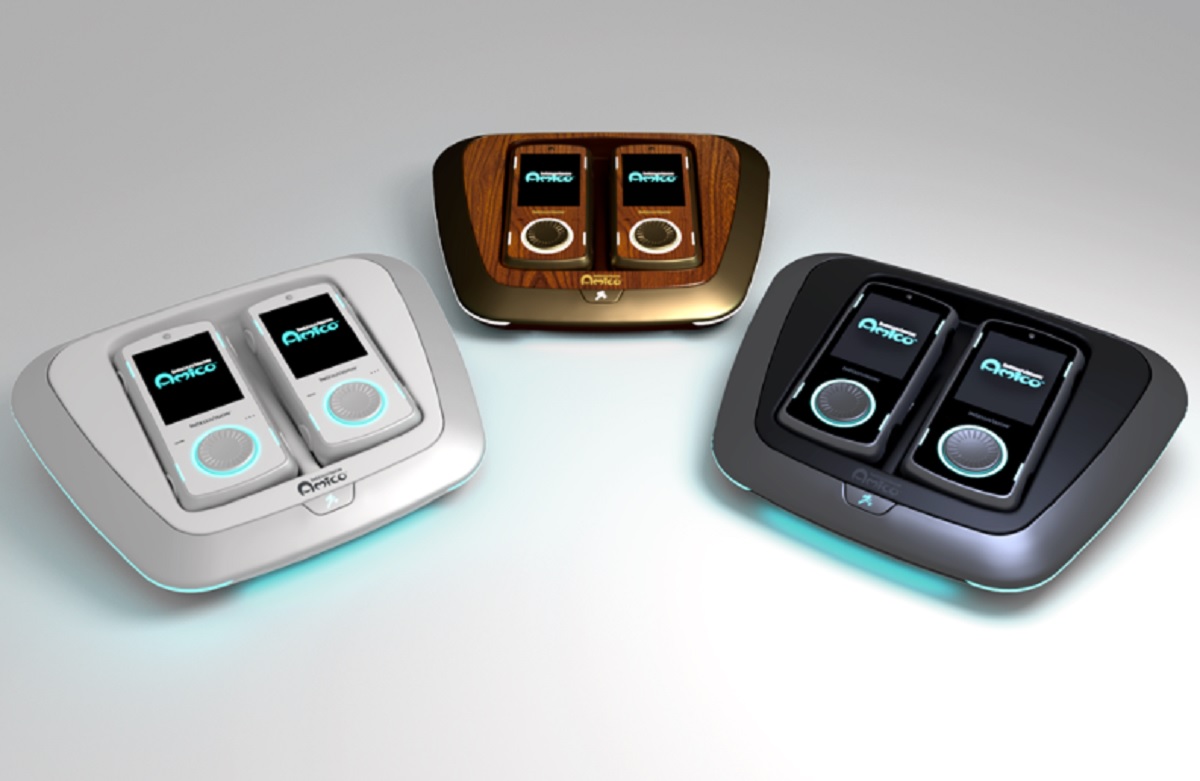 Above: Intellivision Amico comes in multiple colors. Here’s three of them.

So the designers took the Amico through dozens of iterations. They added 40 independently controlled LEDs on the console base and 12 LEDs on each console controller, for a total of 64 LEDs, said Todd Linthicum, director of product development. That allows for an endless amount of expression through lighting, he said.

Some games will make use of the colors on the controller’s lights to correlate with gameplay. The console’s wedge shape allows people to see the lights from all angles. You can adjust the brightness of the LEDs or turn them off. The controllers can charge in two hours and batteries last four hours to six hours.

The controllers have color capacitive touch screens, gyroscopes, force feedback, speakers, microphones, and wireless contact charging. Two controllers nest inside the console base, and that allows them to charge. You can also charge the controller with a USB-C cable. It has a Home button that lets you pause a game or get out of a game easily. It has four shoulder buttons and a touch wheel with a button.

It has an HDMI out port, a USB-C connector, a power connection, and a microSD expansion slot for more memory. You can store 40 to 50 games on the Amico. It has radio frequency identification (RFID) connectivity as a new way to unlock features in games or to interact with the console. You can take an object, tap it on the console, and unlock something. The console’s cooling is passive, meaning it can naturally dissipate heat based on the design without a fan, Linthicum said.

Ark Electronics is making the machine at a factory in China. The company manufactures many controllers and other devices, said E.J. Constantine, CEO of Ark, in the video. The machine and the controllers will come in a variety of colors: black or white. The special editions come in purple, red, or woodgrain.

Tallarico also talked about the company’s new partners, including PlayDate Digital, which does educational titles for children. The first title will star the Care Bears. Intellivision is partnering again with Tozai Games (for a Lode Runner game) and Data East (Lock and Chase, Burger Time, and other titles).

Amico will be available at Walmart, Best Buy, Amazon, EB Games (in Canada), GameStop, and direct from Intellivision.

The First Two No More Heroes Games Are...

Bugsnax on PS5 is free with PS Plus...