We first meet Kyle Katarn in 1998's Dark Forces, a Star Wars FPS developed by LucasArts. Growing up believing his parents were murdered by the Rebel Alliance, he joins the Empire and becomes an Imperial officer. But when he learns the shocking truth later in life—that the Empire was in fact responsible for their deaths and lied to him to cover it up—he defects, becoming a mercenary and siding with the Rebels. In Dark Forces' first mission, Katarn is sent to Danuta, a mining planet, to steal plans for a new Imperial superweapon: the Death Star.

These are the same plans the Rebel Alliance, with a little help from a plucky young moisture farmer named Luke Skywalker, use to blow up the Death Star in A New Hope. But despite Katarn's heroic efforts, his role in this monumental victory has been scrubbed out of Star Wars history. Dark Forces, its sequels, and basically every other piece of media starring or featuring Katarn have been relegated to 'Legends' status, meaning they're no longer canon. Disney has rewritten history, and now it's Rogue One's Jyn Erso who stole the plans. 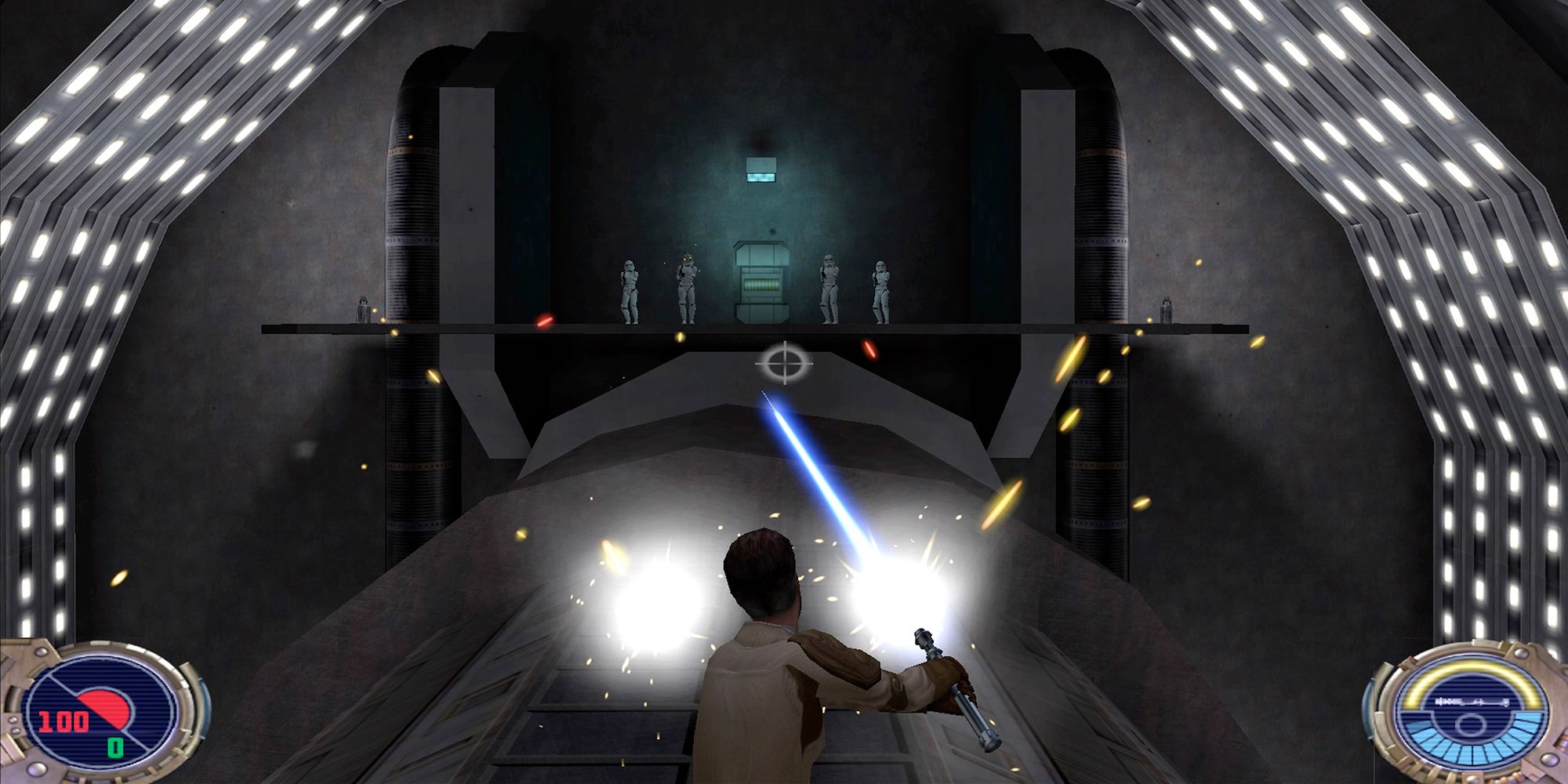 It doesn't matter, of course. Kyle Katarn being decanonised doesn't make him any less valuable as a character, and his stories are still worth telling. He did so much more than steal the Death Star plans in Dark Forces, including surviving a battle with Boba Fett, sabotaging the Empire's Dark Trooper project, and being awarded the coveted Star of Alderaan for his efforts. Also, it's in this game where we learn, courtesy of Darth Vader, that Katarn is Force sensitive—leading to a dramatic switch in careers from Rebel mercenary to Jedi Knight.

The success of Dark Forces led to a sequel, Star Wars: Jedi Knight. Katarn travels to the sacred Valley of the Jedi, gets his own lightsaber courtesy of fallen Jedi master Qu Rahn, and defeats a group of powerful Dark Jedi. As my repeated use of the word 'Jedi' here suggests, George Lucas's buzzy laser sword plays a major role in this sequel compared to the entirely blaster-based original. As well as being a powerful melee weapon, Katarn can use his new toy to deflect enemy blaster bolts, illuminate dark areas, and cut through obstacles.

But by the time Jedi Knight 2 comes around, Katarn is a mercenary again—now working for the New Republic. After almost succumbing to the lure of the Dark Side, he cuts all ties with the Force. Then one of his closest friends is killed by a Dark Jedi and he heads back to the Valley of the Jedi to reconnect with it. Katarn teams up with a post-Return of the Jedi Luke Skywalker, destroys a colossal Imperial military carrier (with assistance from Rogue Squadron), defeats the Dark Jedi, and decides to remain a follower of the Force for the rest of his life.

Novels and comic books continued Katarn's story, and he appears as a non-playable character in Jedi Knight: Jedi Academy. But Jedi Knight 2 was the last game he starred in as the lead, and probably the last thanks to his Legends status. In 2016 he appeared in Star Wars: The Card Game, leading some fans to believe that he'd been recanonised. But I'll believe that when he appears in an actual storyline. Disney could score a lot of points with fans if it brought the Jedi Knight series back and made Kyle Katarn the hero once again.