Hit Point Press recently launched a Kickstarter campaign for a new tabletop RPG titled Heckna!, designed for the fifth edition of the world’s most popular tabletop roleplaying game. Heckna! is set as a carnival horror campaign, is already fully funded (and then some), and has 24 days remaining on Kickstarter as of this writing.

The campaign has reached its funding goal of $20,000 and has blown through to fund all but one reward tier, which, with 24 days remaining, will most likely also be reached. The RPG is set to include a sourcebook in print and PDF forms, a Deluxe Print’N Play PDF, a Heckna Playing Card Deck, Heckna 5E Reference Cards, multiple minis (including Heckna!), a dice set that resembles popcorn and come with a popcorn dice bag, a set of lenticular (animated) spell cards, the Shuffled Stories Engine, a standard Box Set, and a Kickstarter exclusive Revelia Box Set.

The Heckna RPG setting sets itself apart from the others in the genre in a number of ways. One of the most obvious ways is that takes place in a carnival horror setting, and those have been sorely missing from the genre. The Kickstarter video states that the campaign setting is inspired by 1980s horror movies, as well, and that’s a definite plus to its makeup. And just check out that magnificent art! If you’re familiar with Hit Point Press’s previous work (the Humblewood Campaign Setting, Carsus, The Deck of Many), then you know the quality of art their products come with. Heckna has the art turned up to 11, and it’s both lovely and nightmarish, perfectly fitting the setting. 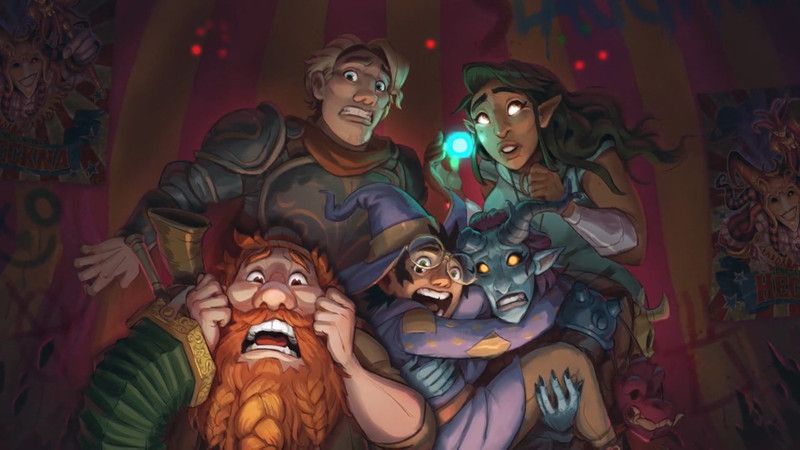 Of particular interest here is the Shuffled Stories Engine, which is a method for GMs to use to build full campaigns with a standard deck of cards. The SSE can be used to quickly build a one-shot adventure, or on the fly to set a random direction for your adventurers to go in. There is also something called a McNally’s Mischief variant to the SSE that will allow a GM and player to choose the next encounter by playing a modified game of poker.

Once it reaches its $300,000 reward tier, a new supplement will be unlocked called ‘Are We The Baddies?’ that will add in a new adventure, a new warlock patron – The Cosmic Jester – that sounds cool as hell, and a way for players to play as Heckna’s minions.

Click over to the Heckna! Carnival Horror Campaign Setting for 5e DnD for all the Kickstarter campaign details and to choose one of the pledge tiers to support it at.