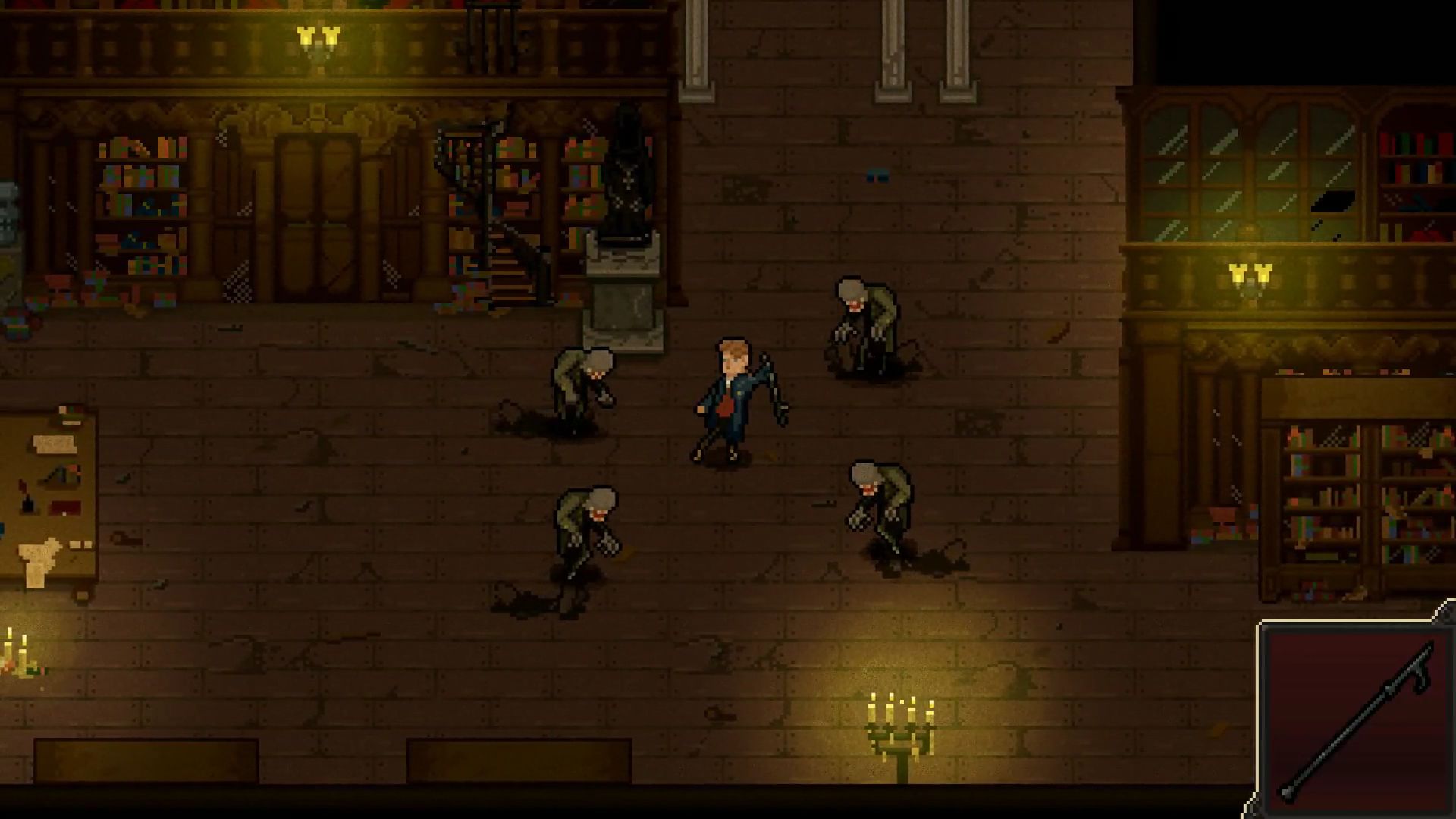 A reader gives his verdict on old school survival horror Lamentum, which shows what Resident Evil would’ve been like as a top-down 2D game.

In hindsight, I’m kind of surprised Resident Evil and its pretenders were such mainstream hits upon release. Their ambiguous progression, limited resources, and harsh punishment for failure wouldn’t really fly today as most modern survival horror, Resident Evil included, is usually much more linear and forgiving. So it is once again up to the indie development scene to take the genre back to its roots, with games like Tormented Souls and the upcoming, World War 1 themed Conscript.

The game puts you in the pantaloons of Victor Hartwell, who is invited to the mysterious Grau Hill Mansion with the promise of a cure for his wife’s terminal illness. Shortly after arriving, he awakes injured and suffering from amnesia. The mansion and its surrounding grounds have been overrun by monsters and you must explore, solve puzzles, and fight monsters to find your wife and ultimately uncover the mansion’s dark secrets.

The game’s gothic horror setting and slow, underpowered weapons are a perfect fit for the genre, and the use of pixelated graphics alongside recorded sound effects and music creates a surprisingly effective atmosphere for such a clearly low budget game. Special mention should be made for the game’s music, which increases the sense of unease and shock as the story unfolds. The eery-yet-calming save room music, where the player can use inkwells to save and unburden their limited inventory, sounds like it was taken straight out of a Resident Evil game.

Lamentum definitely takes a hands-off approach to exploring Grau Hill Mansion but there are visitors and staff members to talk to. They will fill in the game’s story and, along with a notebook, will guide you to your next objective. Maps are essential and must be found for each new area. However, they do not show the player’s position and areas don’t change colour once they have been cleared of items, which is sorely missed.

Puzzles are fairly straightforward affairs, like placing moon pendants in a statue in a correct order or deciphering glyphs into words, with the challenge coming from scouring the world for items and crucial information. Frustratingly, pictures and information aren’t filed for reappraisal, and I found myself using pen and paper, or the Xbox’s screenshot feature, for quick reference. One late block puzzle pushed my patience to almost breaking point with its awkwardness.

Combat is only useful as a last resort, as limited stamina for movement, clunky melee attacks, and a dearth of bullets meant that I would choose flight over fight most of the time, and even the game’s hulking, disgusting bosses can largely be avoided.

Lamentum is never an easy game, but it truly veers into unfair territory in its final act. The player must navigate dark, confusing areas (you are given a lantern, but can’t use it and weapons simultaneously) typically filled with overpowered enemies and hard to find key items, with no map to learn the correct route. It’s an unnecessary spike in an already tough game and smacks of an attempt to pad the game’s runtime. Other inconveniences like ambiguous player health, unskippable dialogue scenes, and occasional one-hit-kill traps also add to the frustration.

There are different endings to Lamentum depending on certain dialogue options, but you are not ranked or given bonuses for speedy or risky play. This is a shame, as I feel that rewards for learning optimal routes, like an old-timey gatling gun or suit of armour, would have increased the playtime in an enjoyable way, as I beat the game in under six hours and felt no compulsion to jump back in.

Despite these issues, Lamentum was a hugely enjoyable throwback, with an excellent atmosphere, intriguing story and moreish-ly tough gameplay. Whether it will convert players who find this genre archaic or prefer a modern approach is debatable, but for those of us who get a perverse pleasure from circumventing overpowered enemies and managing finite resources under immense pressure, it really hits the spot.