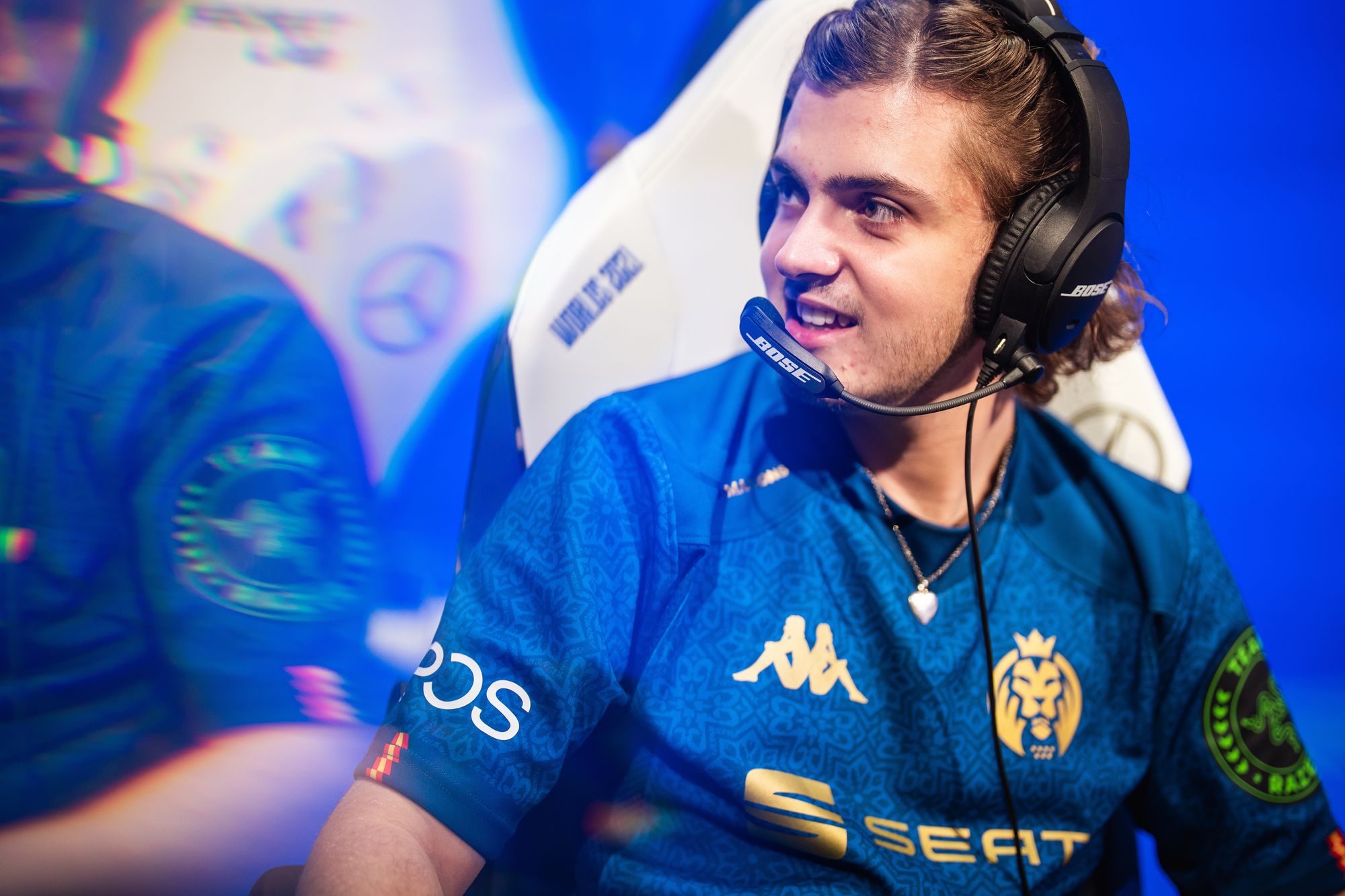 The MAD Lions have become Europe’s last hope. The LEC champions barely made it through the League Of Legends World Championship group stages, following a remarkable comeback against China’s LNG Esports in a nail-biting tiebreaker.

Yet the hard work has only just begun, as the squad will next have to take on reigning World Champions DWG Kia who are the only undefeated team remaining in the tournament.

GameCentral caught up with MAD’s Matyáš ‘Carzzy’ Orság to find out more about the historic day which saw his team play through two tiebreakers following the first ever four-way tie at Worlds.

JS: You just drew DWG Kia in the next round, which may have dampened the mood a bit but you’ve still qualified for the quarter-finals. How are you feeling?

MO: I’m excited. Today was so crazy, we played so many games and most of the games were so exciting, it was just super fun.

JS: Your coach Mac has spoken a lot about the importance of avoiding burnout. Knowing you had so many best-of-ones and the possibility of tiebreakers ahead of you, how did you prepare for such a long day?

MO: The most important thing is to get a good sleep because we had to wake up early. We had to be awake at 8am, so a good sleep was important; that and eating good food to keep energy. Luckily everyone from our team managed to sleep well this time and we had snacks prepared, so it was nice.

JS: You said to Laure you didn’t feel any pressure before today’s matches, what was the general mood around the team?

MO: We were just trying to have fun, we knew if we had fun we were going to make it. And even in the LNG game, we were behind but we didn’t lose hope – the team spirit was still really high. So I think we did a really good job today, I think for every team the most important thing is to never give up.

JS: Was that the same after the Gen.G game at the start of the day? Was it difficult to pick yourselves up after that loss?

MO: We were expecting to win and I think the game was in our hands. We could have won it pretty easily but then we made a lot of mistakes in the game and lost. That’s life. You have to let it go and not allow it to affect you because you still have a long day in front of you. You have to fight.

JS: That game ended after a failed 50/50 at the Baron. Did you feel like your backs were against the wall and had to make a play at that point?

MO: The game felt infinite, it wasn’t going to either side. So we decided to flip the Nash which was not a great call but in the end, we decided to do it as a team. We all followed it and it didn’t work out. It happens.

JS: Moving into the first LNG game, you had to win otherwise you’d be eliminated but managed to stomp them. Was it simply a case of everything falling into place after those early kills?

MO: I think they made a fatal mistake in the early game. We had a really strong bot lane so once they got behind it was super easy for us to play. Especially as Orianna had blue buff and I had like two kills, the game became really easy for us to play so we camped top, which is their strongest part, and they couldn’t play the game.

JS: After a game like that, did you find the break actually hindered the team and killed your momentum?

MO: Not really to be honest. I think it’s good to have breaks between the games. For example, after we won that tiebreaker then went into the Gen.G game, I couldn’t focus at all because I was still super happy and excited from the game before.

JS: Of course, we have to ask about the comeback in that tiebreaker against LNG. Earlier you said the team were laughing the whole time but do you think there were nerves heading into that game? You were on the other side of the map but the two failed dives top were a big moment in the match, was the game plan to focus on getting an early lead and did nerves play into those mistakes?

MO: I don’t think there was any pressure at all, we just miss-executed the early dives. After that, the game became really hard, plus the bot lane match-up was a bit of a losing one so once we started losing top side there was no way any of us could do anything. We just had to hope that they’d start making mistakes and I think Humanoid played really f***ing well that game – that’s basically why we won. That and they made a lot of mistakes.

JS: You and MAD have become well known for your amazing ability to come back from massive gold deficits. Did the team have an idea in mind, in that LNG game, as to how you would try to get back into it?

MO: For making comebacks, it’s always the same for us. Most of the time, we do the same thing and it always works because there is not much counter-play to it. It punishes the players and teams not good enough to close out the game, there is nothing you can do if you’re not good enough.

JS: Were you aware of the possibility of a four-way tie? It’s the first time that’s ever happened at a World Championship, you guys technically made history.

MO: We were aware. I think this is the rarest thing that can happen, having a four-way tie at Worlds. It was a lot of fun to play to be honest. I don’t know how to explain it, but you knew that in every game you would really have to fight for the win.

JS: Heading into that final Gen.G game, as you mentioned you didn’t have a long time to recuperate. What was the team’s thought process throughout that match?

MO: We had a pretty good draft that game and I also think the game was really winnable. In the late game we just weren’t patient enough and made a lot of stupid mistakes. Also in the early game, we fell way too far behind for no reason basically and I think that had something to do with us still being hyped from the previous game.

It’s not an excuse, we trolled that game a bit but it happens. We’re just happy we made it to quarters honestly.

JS: Next is a huge series against the undefeated DWG Kia, a rematch from your MSI semi-final which went to all five games. How do you feel about facing them again?

MO: I think they are the best team in the world again, so I feel kind of sad we have to face them in the quarters. But I’m still confident we can beat them because in the end, if you want to win Worlds you have to beat everyone.

JS: And how do you feel about playing Ghost and Beryl again?

MO: I think it’s a pretty good match-up, I don’t think they’re performing that well at the moment. So I think me and Kaiser have a really good chance of clapping them in the bot lane.

JS: You mentioned on the broadcast that these could be your last games together as a team, you never know what the offseason will have in store. Has that brought you closer as a team during this tournament, knowing you want to make the most of the time together?