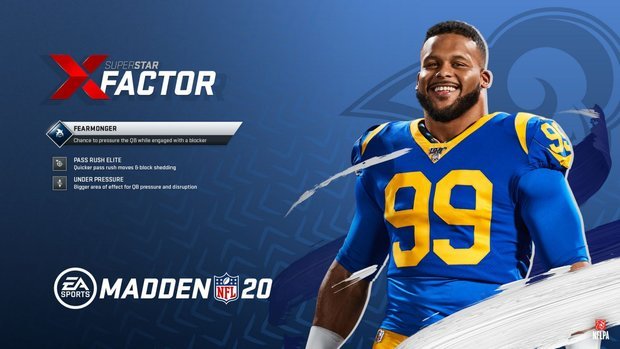 The Los Angeles Rams defensive superstar has made the Pro Bowl in all five of his NFL seasons, and has earned four first-team All-Pro honors. He’s also won back-to-back Defensive Player of the Year awards, and his ludicrous 20.5 sacks a season ago led the league.

The most dominant defender in the NFL today, Aaron Donald is a true game-wrecker. Donald fronts a group of elite pass-rushers that intimidate QBs with their sheer presence. Here are some of his best attributes.

With the combination of Donald’s 99 OVR and his suite of Superstar X-Factor abilities, you can imagine how much of a dominant force he will be in Madden NFL 20. When his Fearmonger Zone ability is activated, he will be able to apply pressure on opposing QBs even while engaged with blockers.