2K is launching Mafia II: Definitive Edition as a remastered title for current-generation game consoles and the PC, and it is part of a larger Mafia Trilogy that is being repackaged for fans of the crime series.

Mafia II: Definitive Edition debuts today, remastered in high definition (4K-compatible graphics) with all of the campaign add-ons and content packs released for the game.

Take-Two Interactive’s 2K Games label owns the Mafia series. The first game in the series, Mafia, debuted in 2002 and was developed by 2K Czech (Illusion Softworks). The second game, Mafia II, debuted in 2010 and was also made by 2K Czech. Hangar 13 created Mafia III, which debuted in 2016. All told, the series sold more than 10 million copies.

Why start with Mafia II?

A good question is why 2K is launching Mafia II’s new edition first. Well, Mafia III is a fresh title that doesn’t need a remastering. And the original Mafia is so old that remastering it would be like starting a brand new game. And the remake of Mafia isn’t ready yet. So I guess that’s why the first remaster we are getting in this series is Mafia II.

Mafia II was set in the 1940s and early 1950s in New York. The main character is Sicilian immigrant Vito Scaletta, who returns from the U.S. Army after World War II and finds his family indebted to a loan shark. He works for the mob to pay off the debt, and your job as Scaletta is to rise through the ranks of the mob.

I started playing the first couple chapters of the remastered game. At the outset, Scaletta gets sent to fight in the U.S. Army during World War II, after he gets busted in a jewelry store heist. I thought the imagery of the streets looked gorgeous, with artistic touches like reflections in windows. But the game shows a bit of its age with the stiff movement of the characters and the less-realistic renderings of the faces. 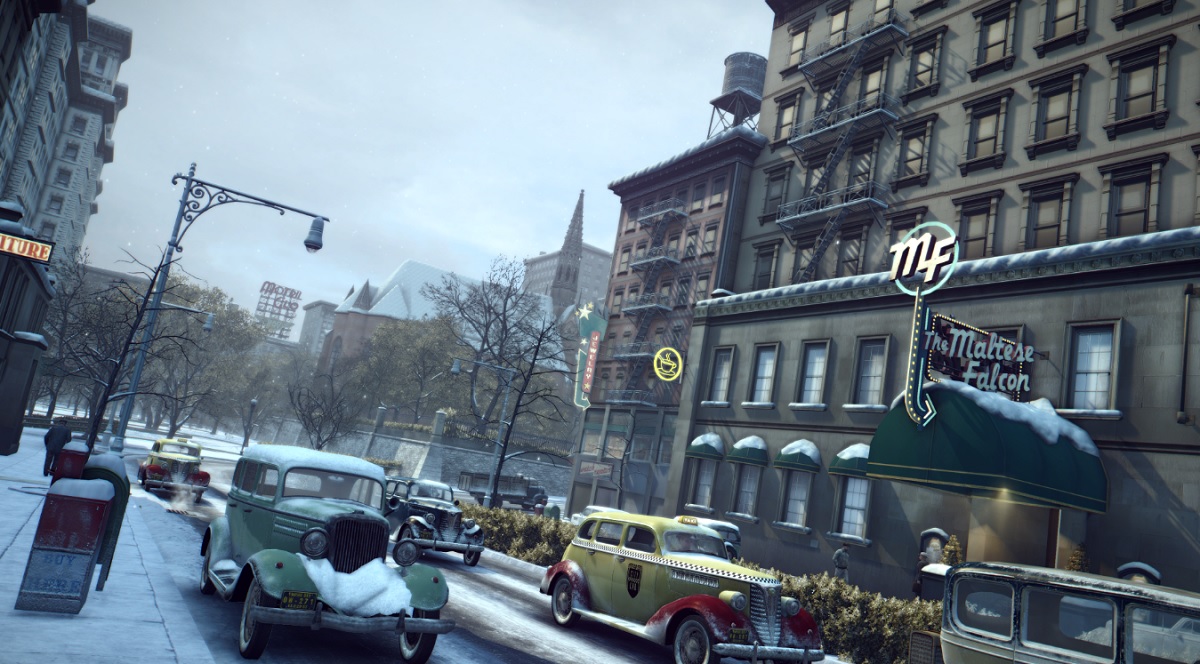 Above: The environment of Empire Bay in Mafia II: Definitive Edition.

So the game looks like its characters were made in 2010, but the environment looks like it came from a more recent game. I don’t think that gamers are going to be that picky about that, as the highlights are the characters, the story, and the gameplay action as you battle other criminals in the mob. This game was never about fantastic-looking characters.

The game uses a new engine. It has an updated script, new cutscenes, and additional gameplay sequences. Hangar 13, a studio under Take-Two Interactive’s 2K label, was in charge of the development of the Mafia II: Definitive Edition game, while D3T Limited handled the remastering of the art work. Hangar 13 is doing all of the work on Mafia and Mafia III.

Mafia III: Definitive Edition is also available today to play. It’s the same game that debuted in 2016, where you play as Lincoln Clay, an orphan and Vietnam veteran hell-bent on revenge for the deaths of his surrogate family members. The game comes with a free add-on download that includes all of the game’s campaign add-ons and upgrade packs. So I guess you would call this a repackaging, rather than a remaster or a remake. Worth noting: Mafia III had a lot of bugs, and hopefully Hangar 13 has stamped them out.

Lastly, Mafia: Definitive Edition is a remake of the original title, and it will debut on August 28. Mafia III and Mafia II will sell for $30, while the Mafia title will sell for $40. The whole trilogy is available for purchase for $60. The games will be available on the PlayStation 4, Xbox One, Steam, and the Epic Games Store.