Previous deck: Torens, Fist of the Angels // Next deck: Check back in the new year!

Happy Holidays! At this time of year, you may be with friends or family, and, for any Magic the Gathering player, that dramatically increases the risk of an ad-hoc Commander game breaking out. Maybe you're introducing new players to Commander for the first time and want to show them why the format is so great, or maybe you've had a little too much to drink and don't want to have to think about lines of play.

For that, why not make a Christmas-themed deck? One of the best things about Commander is how you can express yourself through your deck, so toss out any notion of power or efficiency, and embrace the jank in this festive Jorn, God of Winter Commander deck. 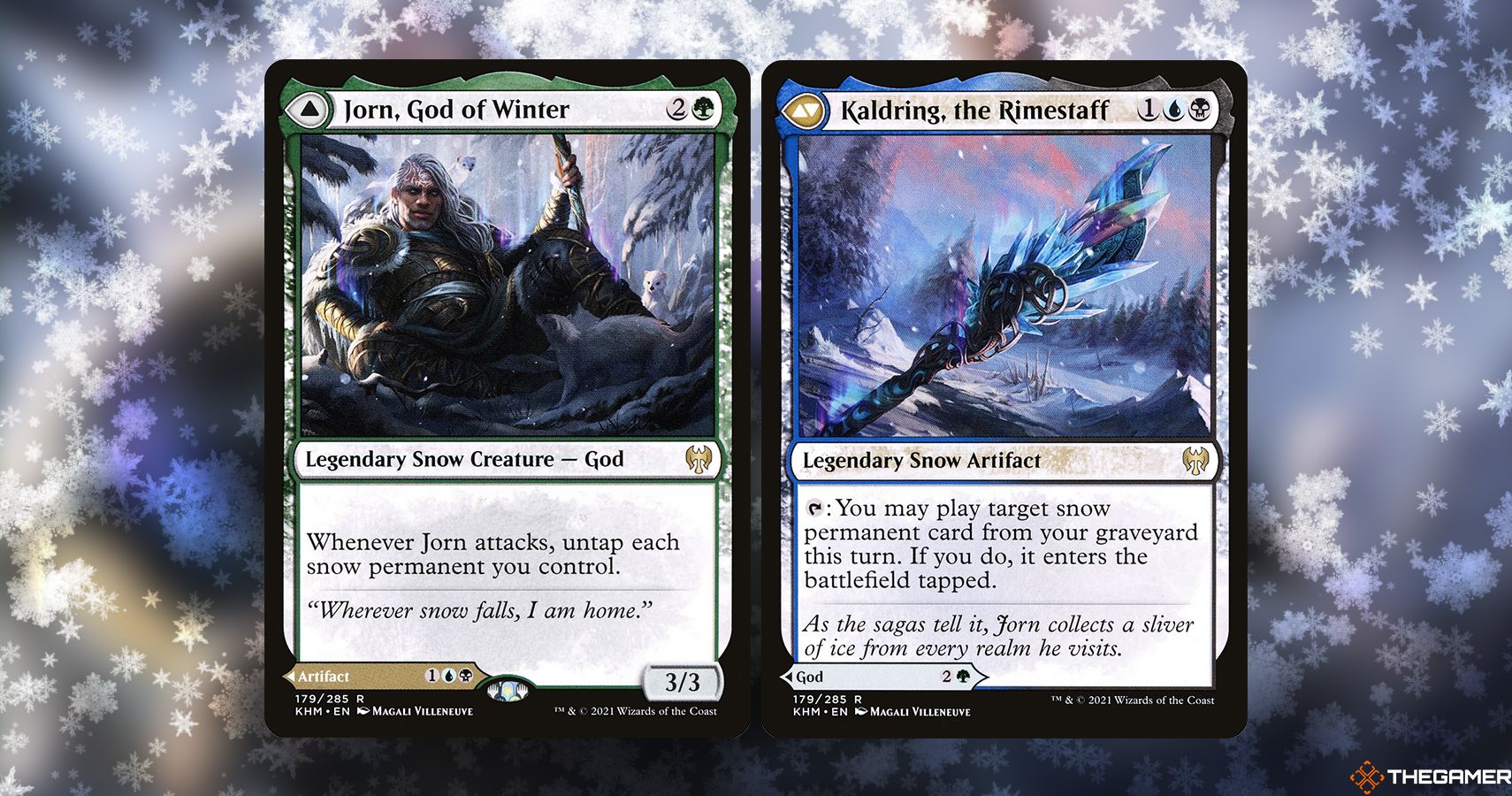 Jorn, God of Winter is a 3/3 God from Kaldheim that costs two generic and one green to cast. When it attacks, you untap all Snow permanents you control (which includes Jorn himself, as he is a Legendary Snow Creature). Snow permanents aren't any different from regular permanents, other than the fact they can be affected by spells and abilities that specify snow, like Jorn.

Jorn is also a modal double-faced card, meaning you can either choose to cast Jorn, God of Winter, or its other side, Kaldring, the Rimestaff. Kaldring is a Legendary Snow Artifact that costs one generic, one blue, and one black. You can tap it to play a snow permanent from your graveyard this turn, but, when you do, it enters the battlefield tapped.

None of this is important. We just picked Jorn for three reasons:

While previous guides have been split up into Ramp, Draw, Whatever The Deck Does, Winning, and Powering the Deck Down, we're going to take a different route for this. Let's look at the thematic elements of the deck instead. 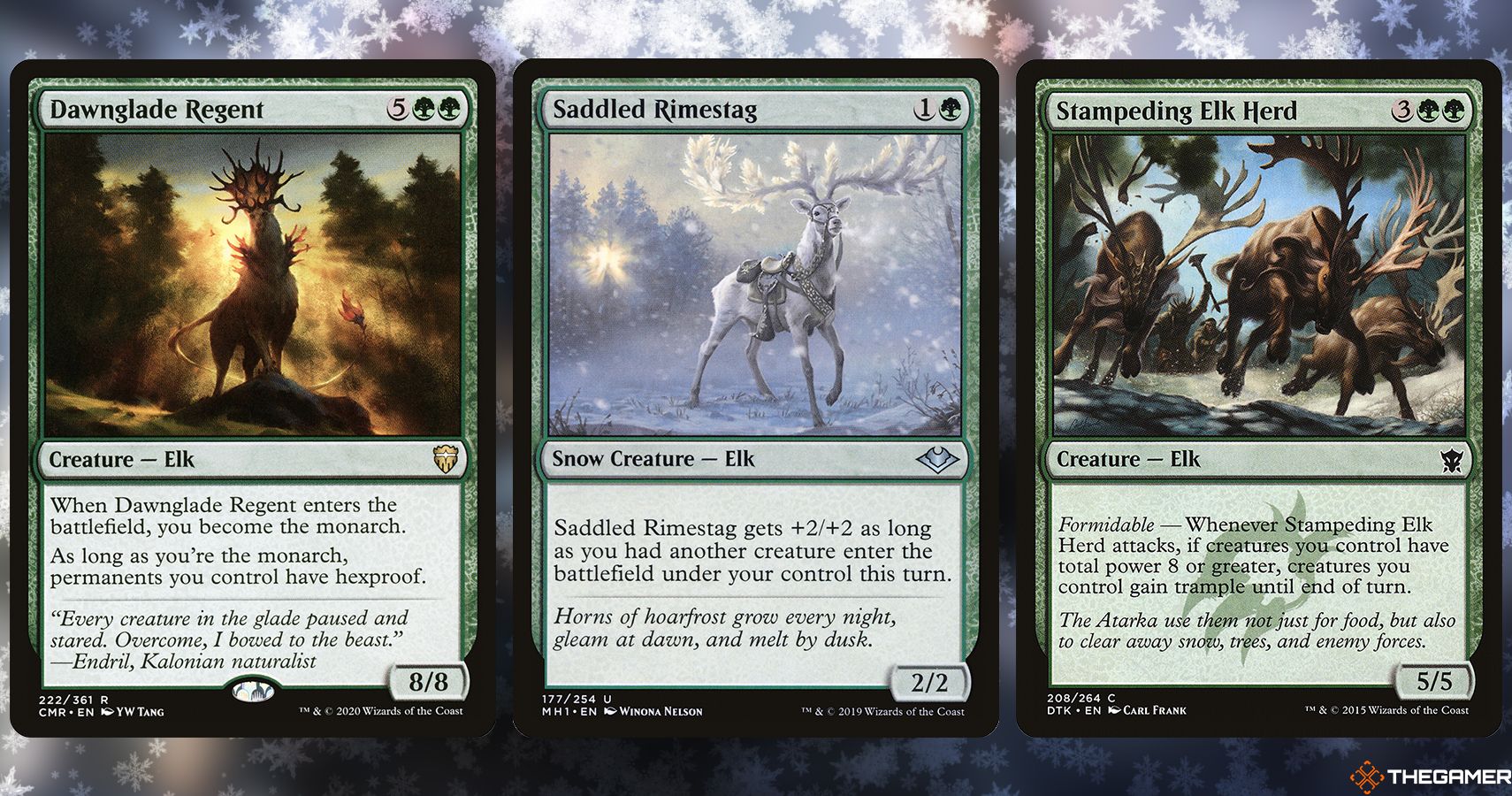 and Highland Game, and Golden Hind.

But do you recall,

The most famous Elk creature of all?

Burnished Hart is a creature

Who can sac to get you land,

He's such a common ramp card,

Yet he fits our deck's theme

And we'll put him in with glee!

Burnished Hart is a cheap card,

So we'll gladly pay his three!

Santa's reindeer make up the majority of our attacking force. Dawnglade Regent will make us the Monarch, which is a nice added bit of draw, while Burnished Hart, Dawntreader Elk and Golden Hind give us access to more mana. 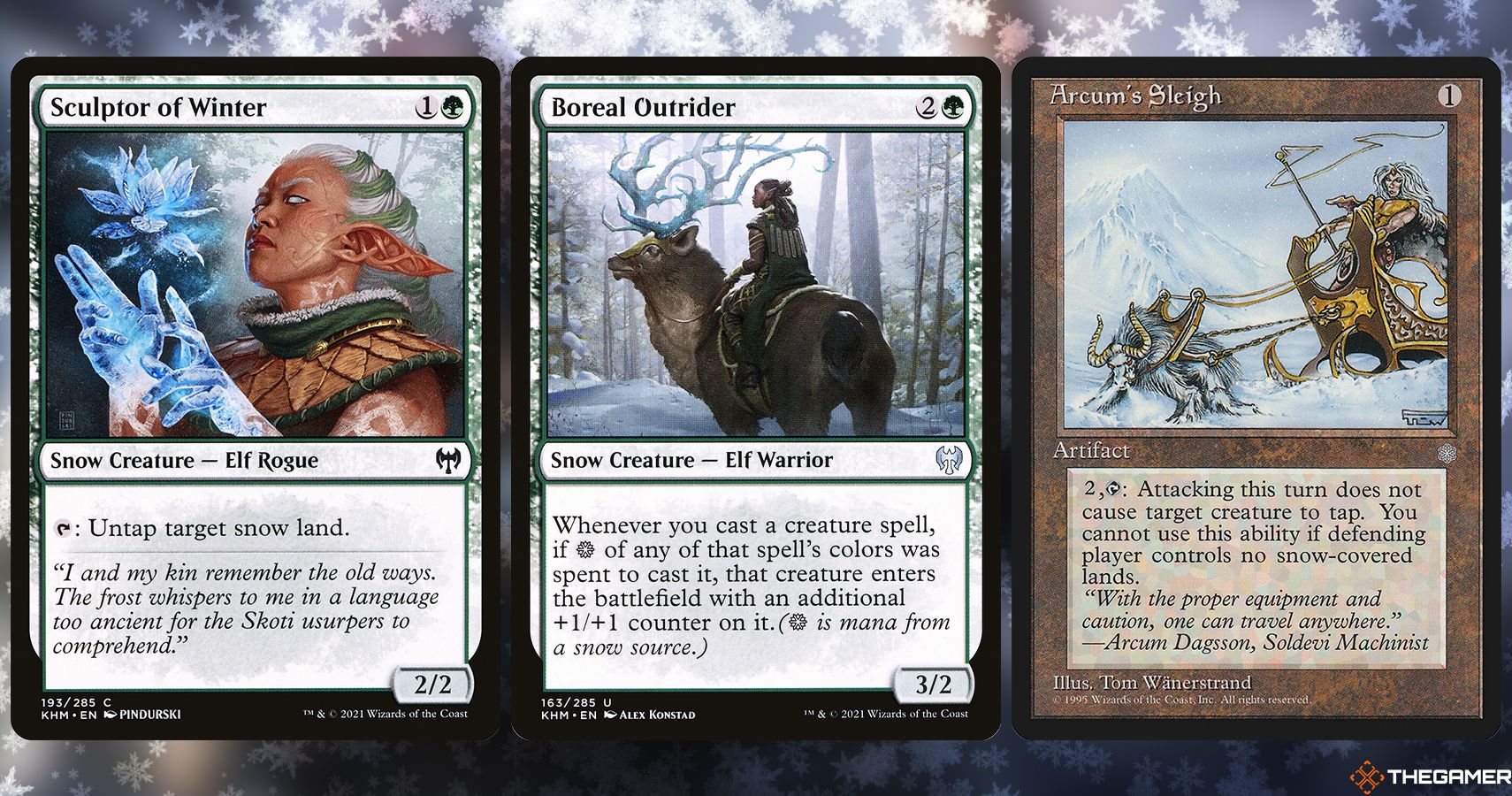 It isn't a one-man-show up in the North Pole, Santa's got all loads of elf minions to tirelessly make toys and gifts.

While we have got a few elves, like Lathril, Blade of the Elves, Boreal Druid, Sculptor of Winter, and Boreal Outrider, Magic's version of Santa has modernised a bit and also included an Academy Manufactor to make even more artifact tokens.

We've also got Toymaker. Does it fit in this deck at all? Not really, other than turning an Akroan Horse into an actual horse, which is funny. But it is incredibly on-theme, so in it goes.

We've got to have Santa's Sleigh, too. Arcum's Sleigh is actually pretty good (even if it isn't a vehicle for some reason), as it taps to give another creature Vigilance, as long as the defender controls a snow land. Snow lands are more popular than you might think, so it could come in handy once in a blue moon. 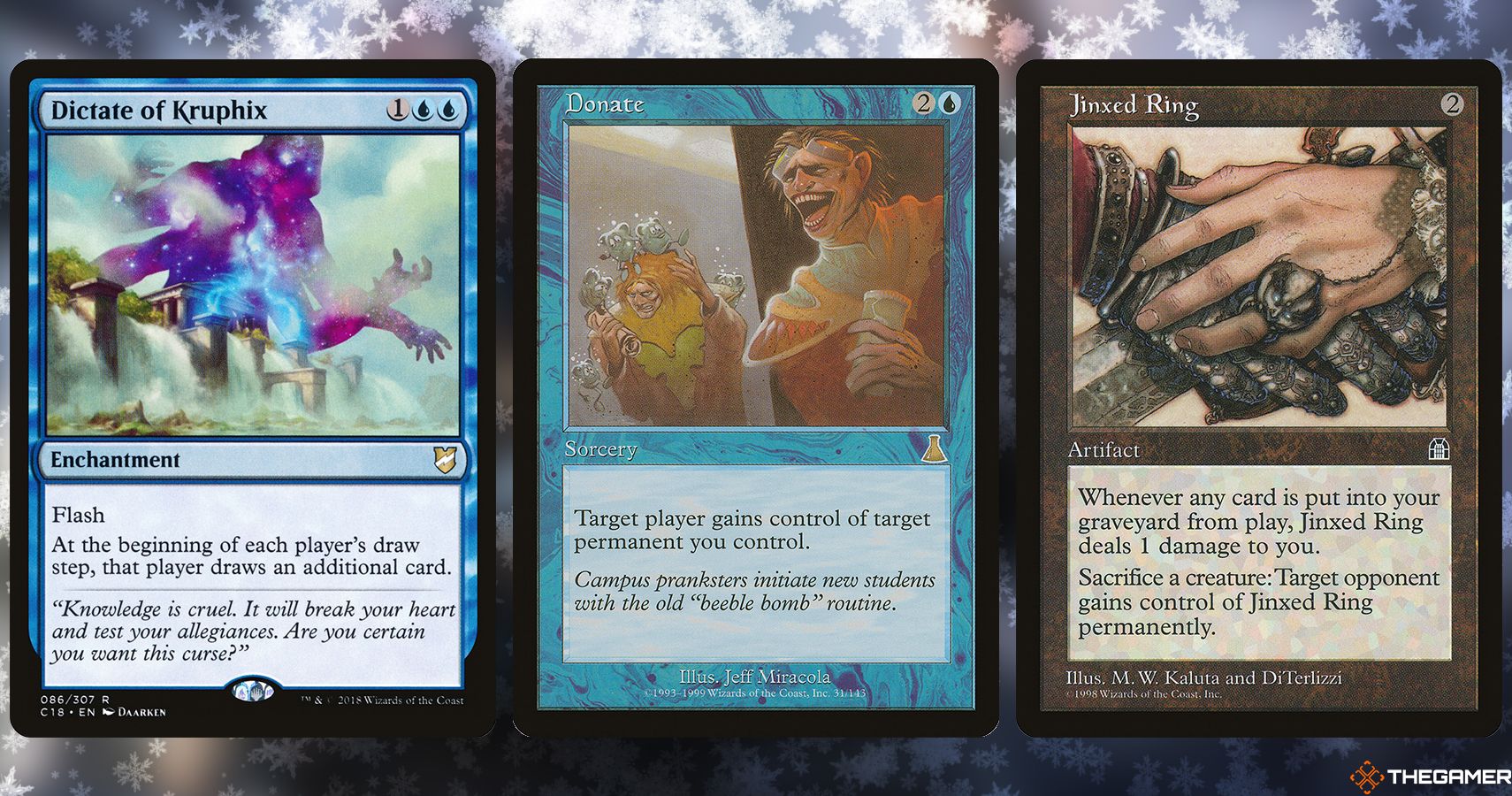 Anybody who says the joy of Christmas is in giving gifts, not receiving them, definitely hasn't seen what we've got to share with the table.

While yes, there are a few nice Group Hug-y gifts like Akroan Horse, Dictate of Kruphix, Howling Mine, and Wishclaw Talisman, there are also a lot that come with big downsides.

Stuff like Jinxed Ring and Jinxed Idol, which deal damage to you unless you sacrifice a creature to pass it on to somebody else, Coveted Jewel which encourages others to attack you, and even Illusions of Grandeur. It'll give you 20 life when it enters the battlefield, and then you can dump it like an unwanted present on to somebody else with a Donate and have them lose 20 life when they can't pay the cumulative upkeep. 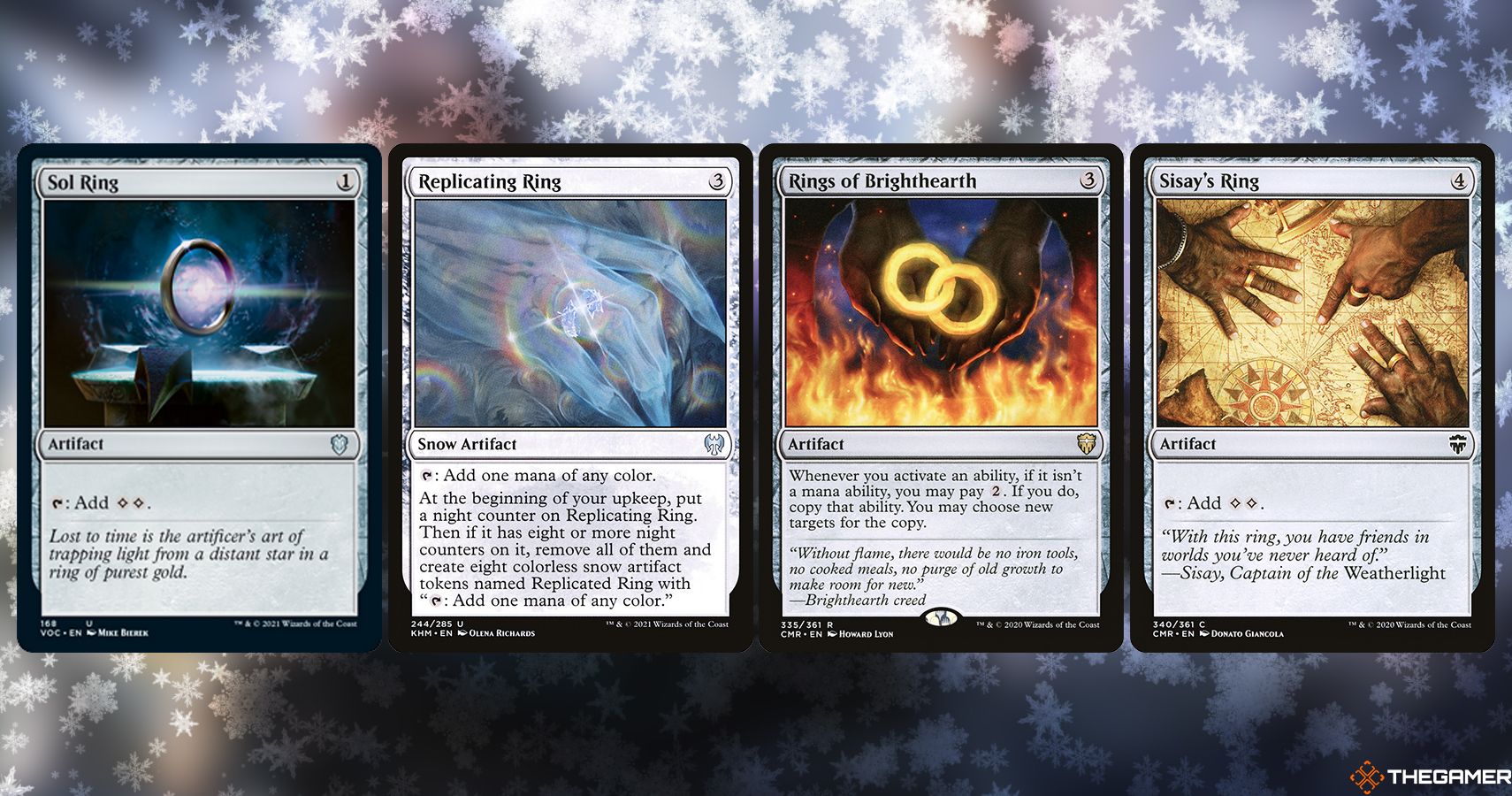 We're all agreed that The Twelve Days of Christmas is the worst Christmas song ever, right? It's so repetitive, and by the end of it, your true love has given you 184 birds which is frankly ridiculous. And yet the line where you get to shout "FIVE GOLDEN RINGS" at the top of your voice is a banger, so we'll put those in.

This is a Commander deck, so we'll put Sol Ring in. Replicating Ring is also a good inclusion, as it is a snow permanent that Jorn can untap and also makes eight more rings after eight turns. Sisay's Ring is a neat mid-tier mana rock as well. Finally, we've got Rings of Brighthearth, which can double any activated ability.

If you're thinking "that's four cards, where's the fifth", Rings of Brighthearth has two rings on its art, making it a total of five rings. It counts. 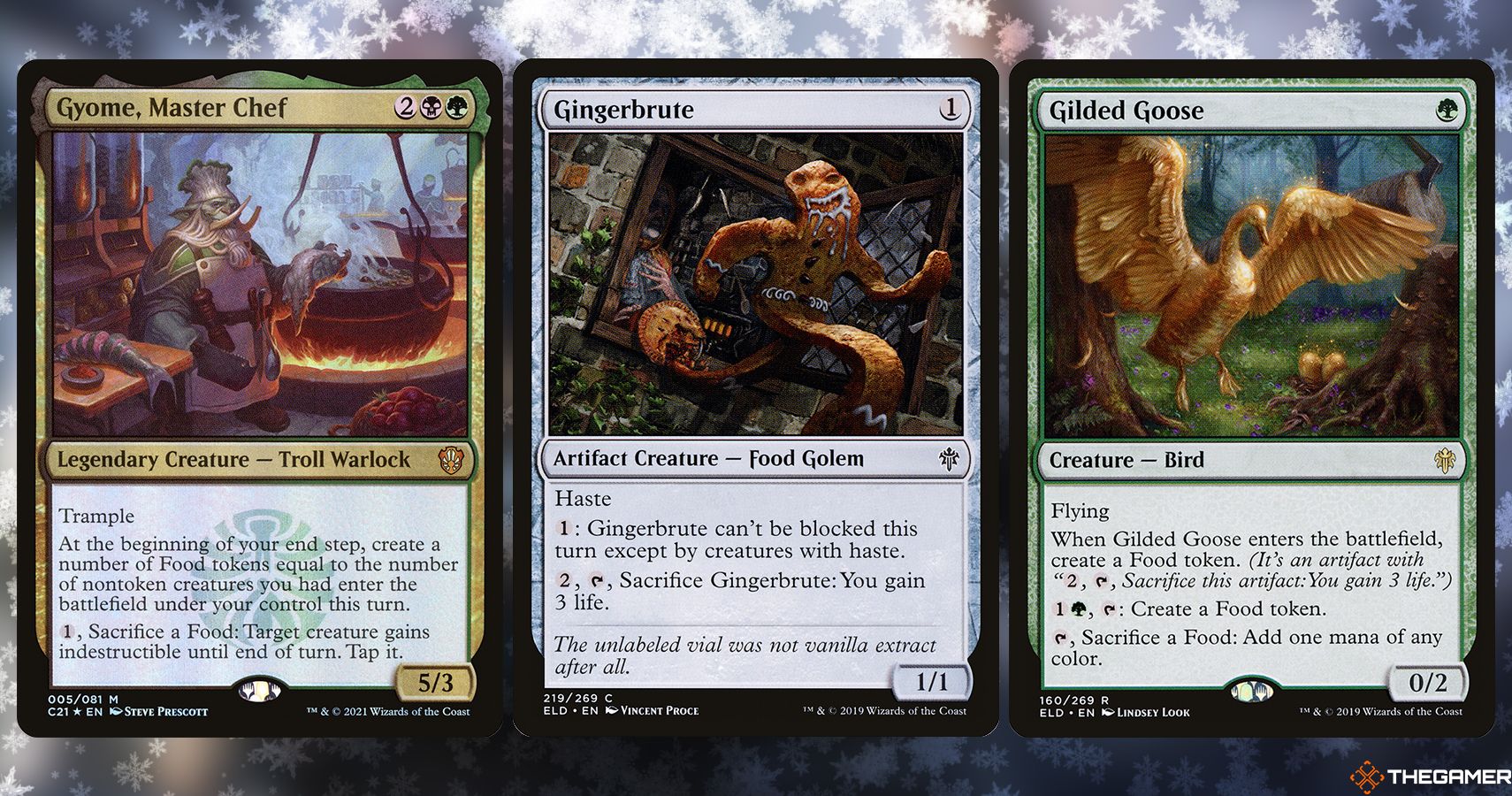 Food is easily the best bit of Christmas, so we're not going to forget to bring snacks with this deck.

First is our chef, Gyome, Master Chef. He makes a lot of food if you're playing a lot of non-token creatures, and he can sacrifice food to make something else indestructible. We have a few other ways of making food (which Academy Manufactor will turn into food, treasure, and clues), but he'll be our primary source.

Other snacks include Bake into a Pie, Fell the Pheasant, and the main event, the Gilded Goose. We've also got a Gingerbrute in here. He's not food, he can't be eaten, but… he's a gingerbread man. Of course Gingerbrute was going to be here.

Baby It's Cold Outside 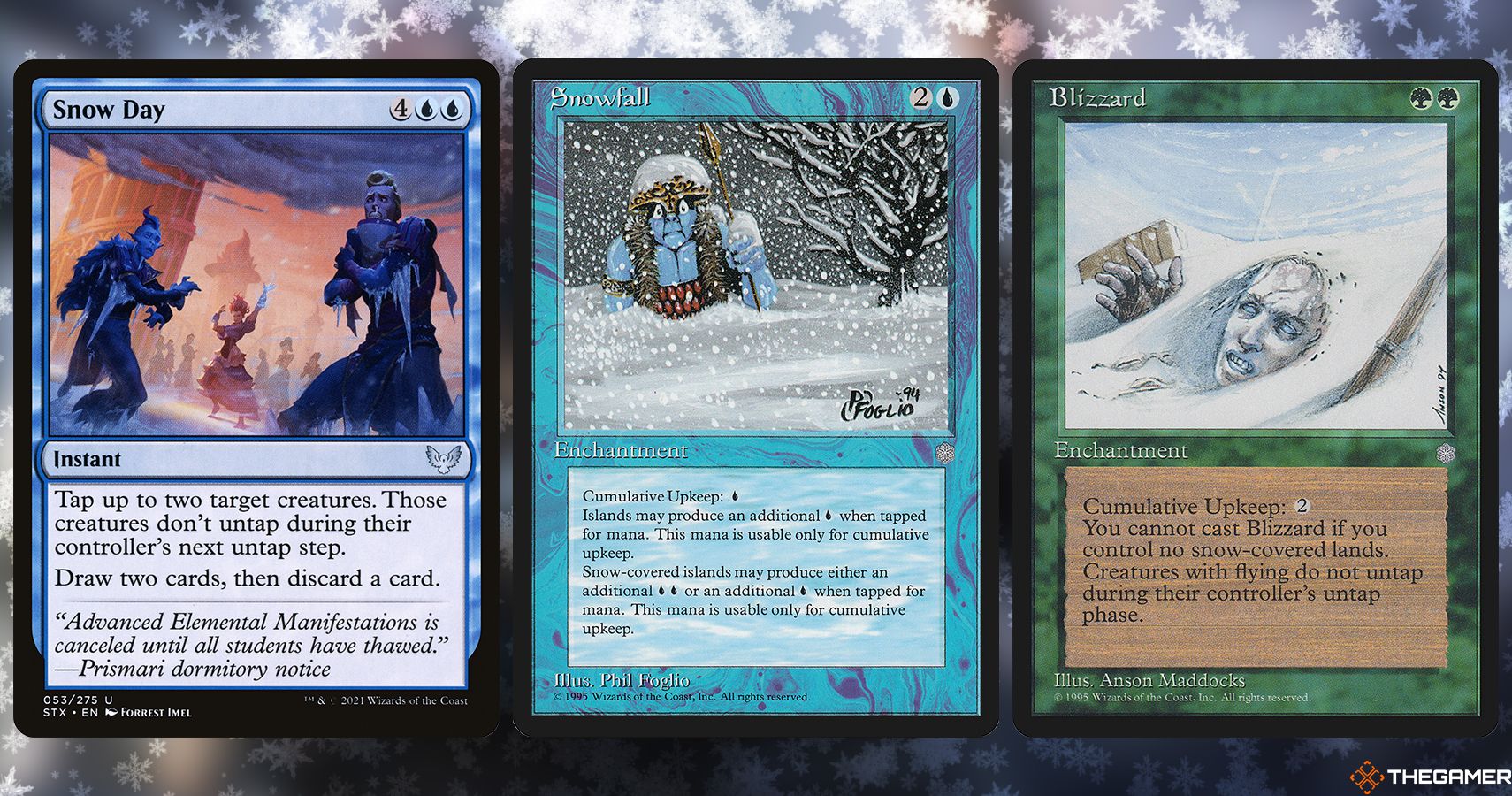 White Christmases are the best, so let's make sure we have one.

Blizzard has a cumulative upkeep of two, but it stops flying creatures (which would otherwise be a big problem for us) from untapping. As a bit of spot-freezing we've also got Snow Day and Icebind Piller, just in case someone else gets too naughty. For the proper bad kids who don't get any toys, there's Chill to the Bone, a good bit of non-snow creature removal.

Snowfall makes additional mana to pay our numerous cumulative upkeeps, Winter's Chill destroys any attackers, Into the North and Glittering Frost give us some non-Reindeer-themed ramp, and then there's Abominable Treefolk as a heavy-hitter. 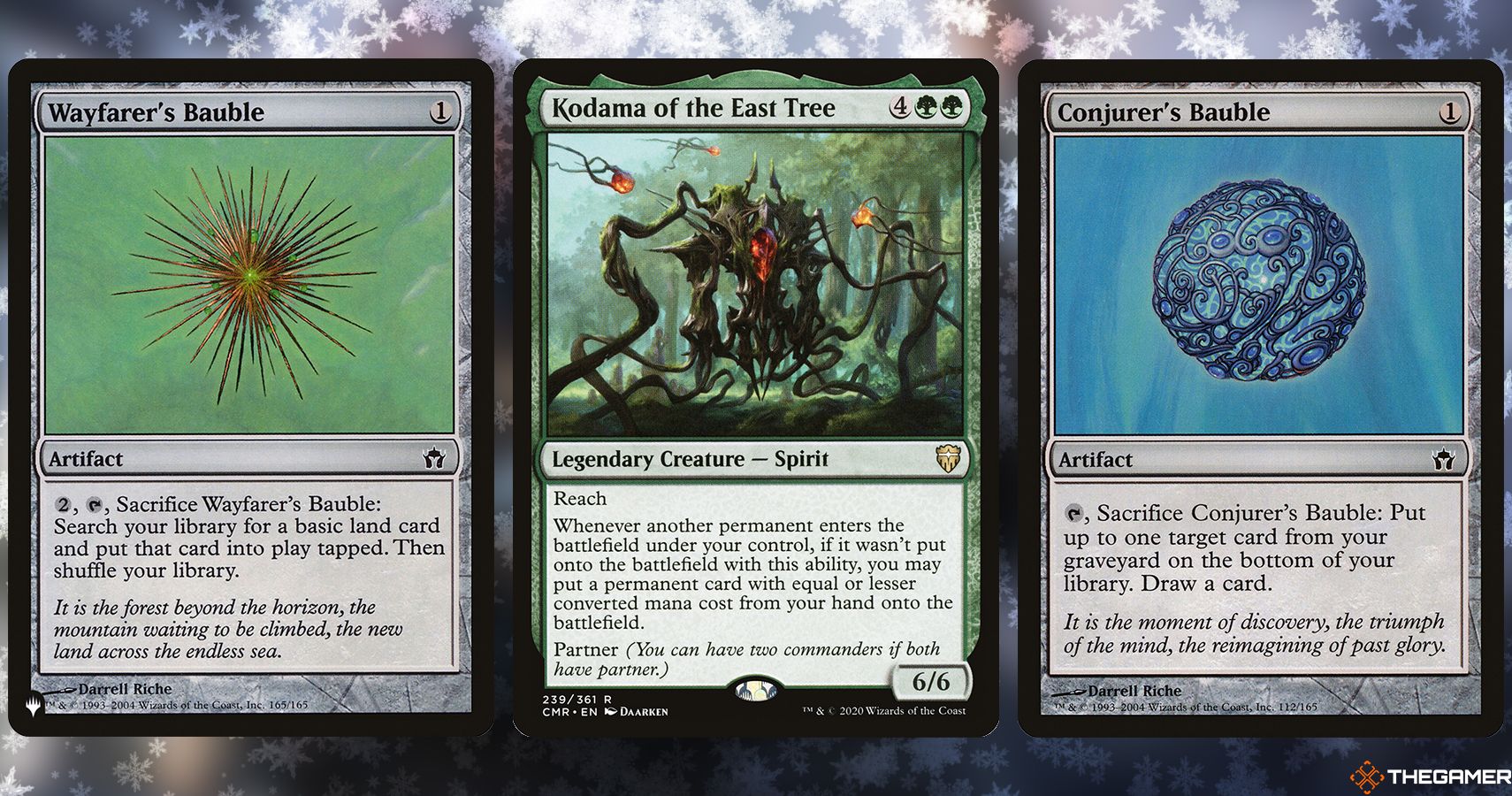 There are a lot of trees, treefolk, and dryads in Magic we could've used, but as a rare splash into actually having a powerful card, we're going to use Kodama of the East Tree. Playing permanents for free is always nice, but it is a bit weird looking for a tree. Let's make it look a bit more festive with some decorations. 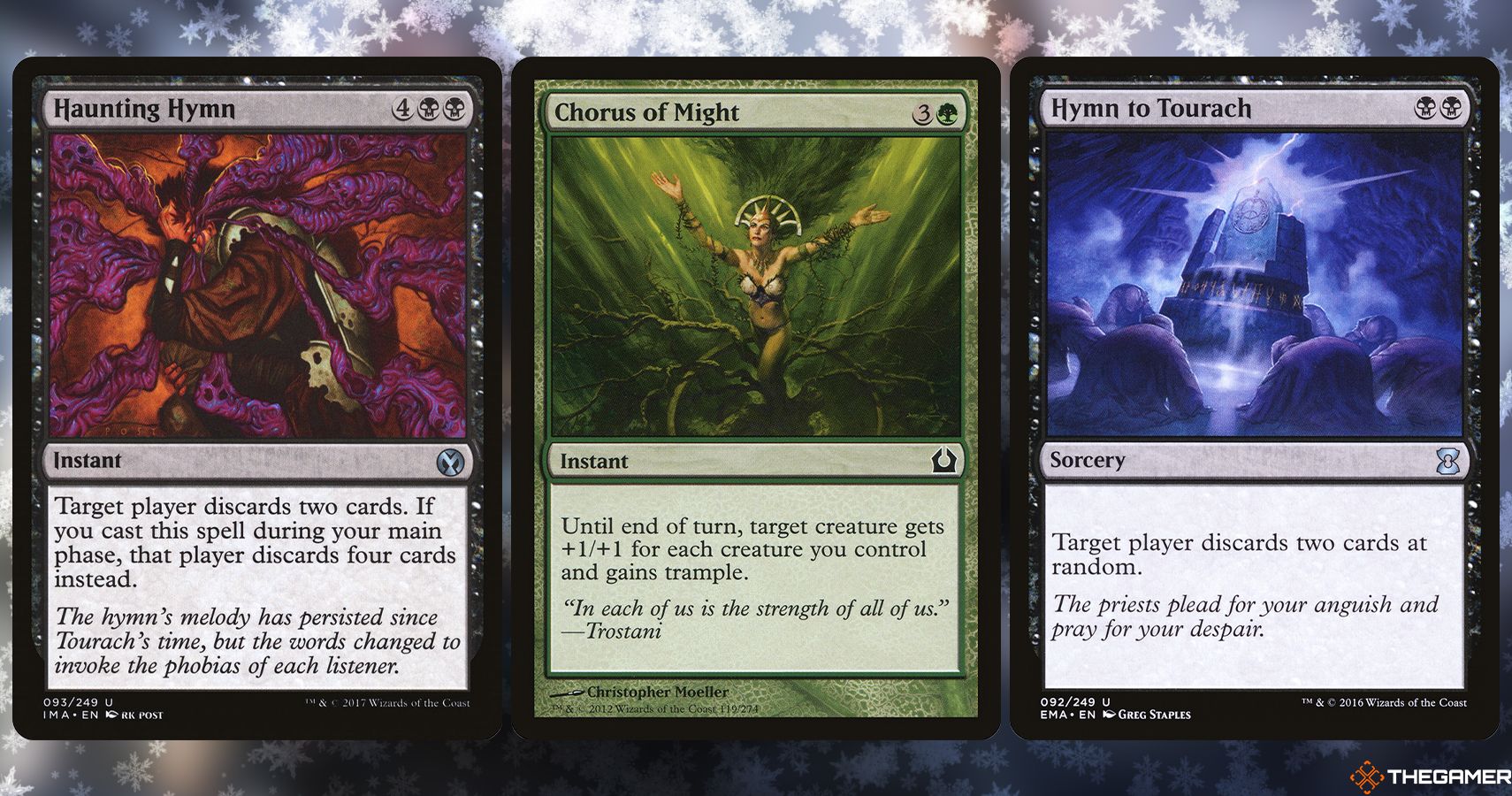 There are way too many Christmas songs to include all of them, so we've also got a few generic pieces that you could spin to the table as being about Silent Night, Jingle Bells, Joy to the World, or whatever other song you can think of.

Haunting Hymn and Hymn to Torach are good hand-destruction tools, and Songs of the Damned can give us a last-minute burst of mane if we have a lot of creatures in the graveyard. Finally, the only counterspell in this entire deck is a… Swan Song. Just consider it as you being the loved one giving someone else billions of birds for a change.

Joy To The World, It's Time To Win 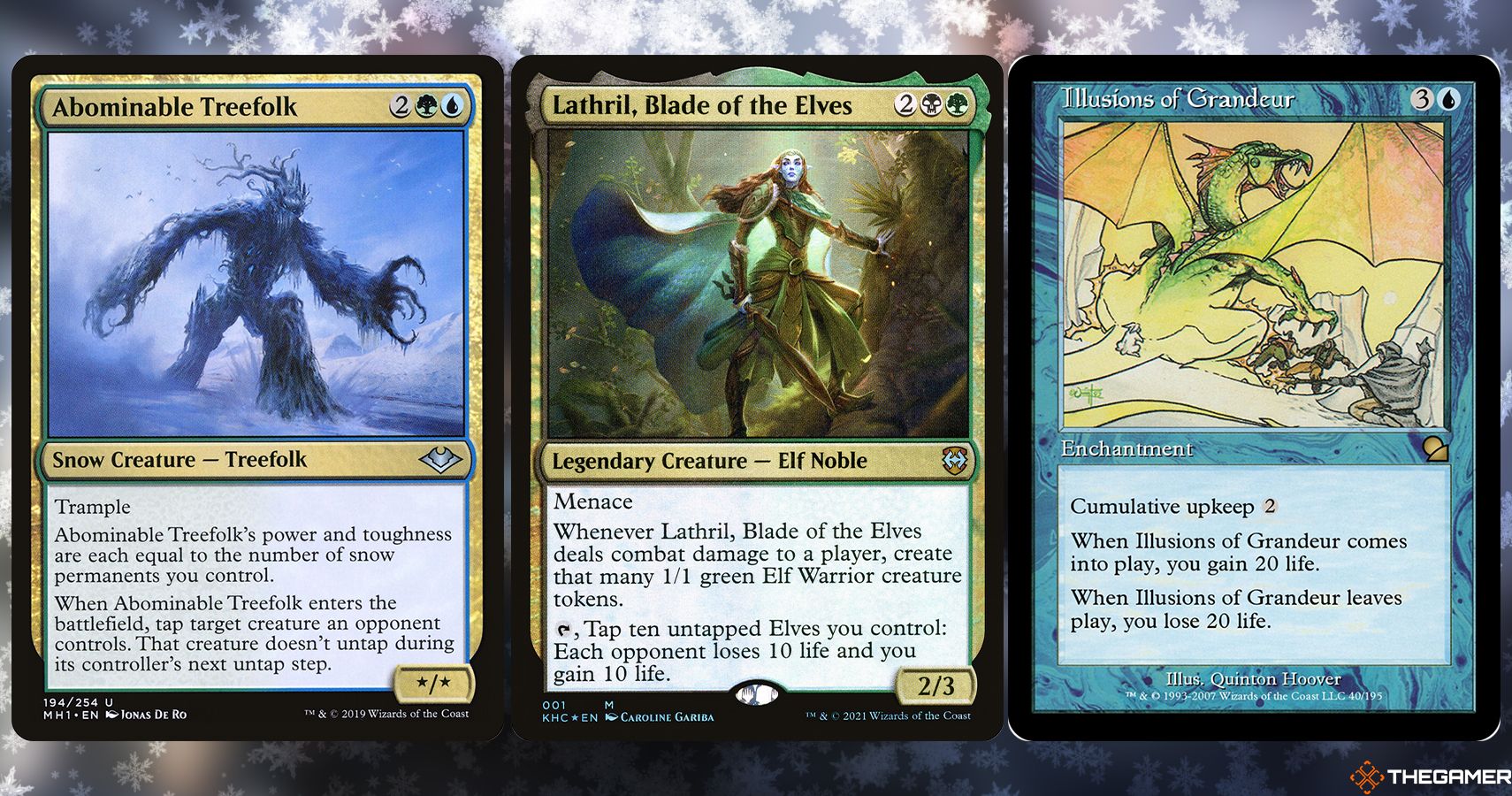 This deck doesn't really prioritise winning, but there are ways to get there.

Lathril, Blade of the Elves is going to be a big player. If you can tap down blockers with cards like Snowday and Icebind Pillar, you could hit through with her and make a lot of Elves to continue hitting with. Her ability then lets you tap elves to make each opponent lose ten life.

Donate and Illusions of Grandeur is another way to finish a player off, as their only options are to pay the cumulate upkeep or take 20 damage. It's a one-player-only thing, but on the off chance people have let you and your quirky deck stay in play long enough, there's a chance it could get you the win.

Other than that, this is a pretty stompy deck. Hit with Abominable Treefolk and your herds of reindeer, or even give people rubbish gifts and watch them wither away. This deck will win maybe one in ten games, if that, but it'll be funny when it does.

Happy Holidays and a very Happy New Year! If you want to see this deck, fully tagged by theme, check out its Moxfield page.