Magic: The Gathering is slipping into the life of crime with Streets of New Capenna. Set in a 1920s world where the streets are run by five crime families, it's full of glamorous art deco art contrasting with the brutal criminals who own the city.

To work out which cards are most valuable, we're working with TCGPlayer's market value of just the main Streets of New Capenna set itself (meaning none of the Commander-exclusive cards or cards found in preconstructed decks). This reading was taken a few days after the prerelease, meaning cards are in players' hands already, but ahead of the official tabletop launch on April 29. Card prices may fluctuate in the days and weeks following launch, but it's unlikely to change too radically. Here are the ten most valuable cards in Streets of New Capenna.

Ob Nixilis has been causing a bit of an upset among players. This three-mana Planeswalker is ludicrously powerful, as it's easy to make a token copy using the casualty mechanic that can activate its ultimate ability straight away. This is potentially the Oko, the Trickster of Streets of New Capenna, justifying its price and its two different positions on this list.

This version is just the bog-standard showcase frame, with fantastic art by Igor Kieryluk but no special foiling included. Other versions of him aren't trailing too far behind, though, with the borderless version at #12, and the basic printing at #13. 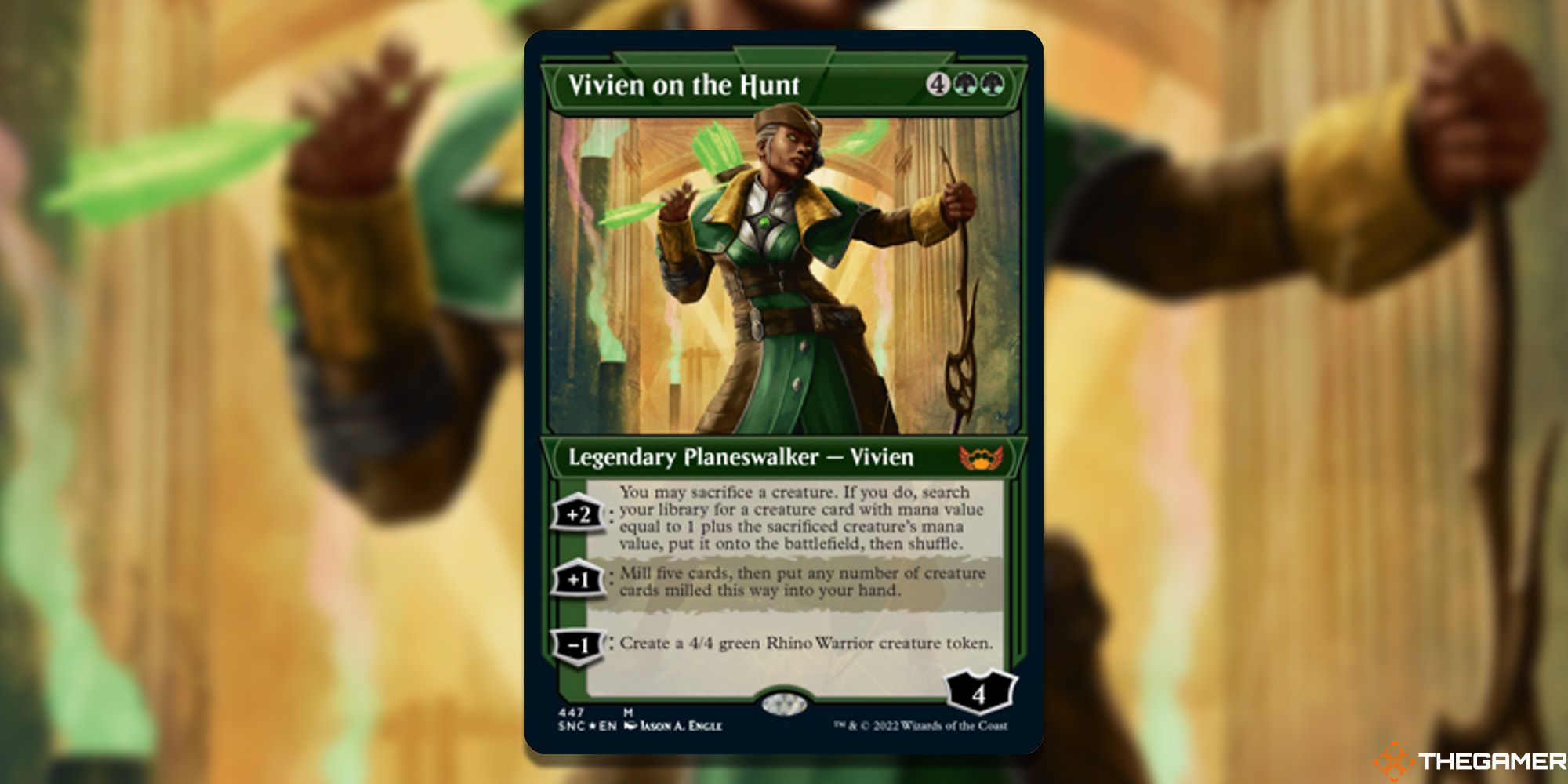 All three of New Capenna's Planeswalkers appear on this list, but this is the only time we see Vivien on the Hunt. It's a decent Planeswalker, enabling self-mill, token generation, and breeding pool-type effects, but it isn't quite as spicy as Ob Nixilis.

The art by Jason A. Engele is fantastic though, reimagining Vivien Ried as a private eye pounding the streets of New Capenna for clues. It's a cool way to imagine the nature- and animal-loving character in an urban setting, and fits the 1920s' aesthetic of the set really nicely. This version features etched foiling, which can be seen on the frame elements exclusively in Collector's boosters.

Like Vivien, the etched foil version of Giada is only found in Collector's boosters. Giada is also the first nonplaneswalker card on the list, being a powerful new mono-white angel tribal commander who makes each consecutive angel bigger than the last. She is easily one of the best commanders of Streets of New Capenna, which justifies her raised price.

If you're fine with a non-etched foil version, the regular showcase frame printing is $50 cheaper, sitting at $7.82. The basic printing is even cheaper, at $4.69.

Gilded foil is a new treatment for Streets of New Capenna that applies a smoother foiling effect to certain parts of the card – kind of like a mid-way point between regular foil and etched. It looks really nice, and is available on the showcase version of every three-colour card in the set. Unlike etched foils, these can be found in both collector's and set boosters – although they are rare in both.

Four of the five families bosses of New Capenna appear on this list, and the first is Jetmir, Nexus of Revels. The party animal of the Cabaretti, he's an amazing go-wide commander that gives your creatures more buffs depending on how many creatures you control.

The next crime boss on the list is the head of the mysterious Obscura, the sphinx Raffine, Scheming Seer. She is a connive-focused creature that lets you draw cards and buff your creatures. The more you attack with, the better the connive trigger will be, encouraging you, like Jetmir, to go wide.

Raffine is arguably one of the more constrained of the New Capenna bosses, but her ability is still incredibly splashy. It can be used to put powerful cards into your graveyard for a graveyard-focused deck, or it can be used to fill your hand up with the control pieces you need to keep your opponents at bay. Fortunately, it's only the gilded foil that's so pricy, as the non-foil showcase frame is just $3.91, while a regular treatment is a mere $1.75.

The draconic head of the Riveteers loves sacrificing creatures, encouraging you to throw away your powerful creatures (that, ideally, you blitzed) in exchange for direct damage to the face. More importantly, she plays up the Riveteers' Treasure token theme, which has been a big – if controversial – part of Streets of New Capenna.

Magic's been experimenting with new foiling and printing techniques ever since Commander Legends introduced etched foils, but gilded is possibly the nicest. Though it doesn't look like actual gold, the foiled elements of the frame have this mirror-like quality to them that looks fantastic. As cool as etched foils are, hopefully Wizards tries gilded foils in more sets.

Ever since 2021's Kaldheim, the Magic story has been slowly marching towards a big conflict with the Phyrexians. A species that seeks to convert every form of life into a horrific meld of flesh and metal, we've already seen two of its 'Praetors', or leaders. Kaldheim had Vorinclex, and Kamigawa: Neon Dynasty had Jin Gitaxias. In New Capenna, we have the rebel Praetor who stands against the rest, with the red-aligned Urabrask.

Aside from being one of Magic's most interesting characters, Urabrask, Heretic Praetor is a brilliant mono-red commander. It forces your opponents into relying on impulsive card draw that exiles at the end of the turn – something red can deal with better than other colours. Like the other etched foils, this printing is only available in collector's boosters. Fortunately, other versions – including the Phyrexian language printing – can be found in other packs as well.

The last of the New Capennan family bosses (sorry, Falco Spara, you only got to #11), Lord Xander was the vampiric lord of the art-collecting assassins, the Maestros. When his card was revealed, many people were terrified of his potential in the Commander format, as he can force discard and sacrifice with ease.

He isn't as big a threat as people though, but he is still an excellent Grixis (red/blue/black) Commander. If you want to bling out your deck, Tran Nguyen's showcase frame art is incredible, and is only accentuated by that gilded foil frame. 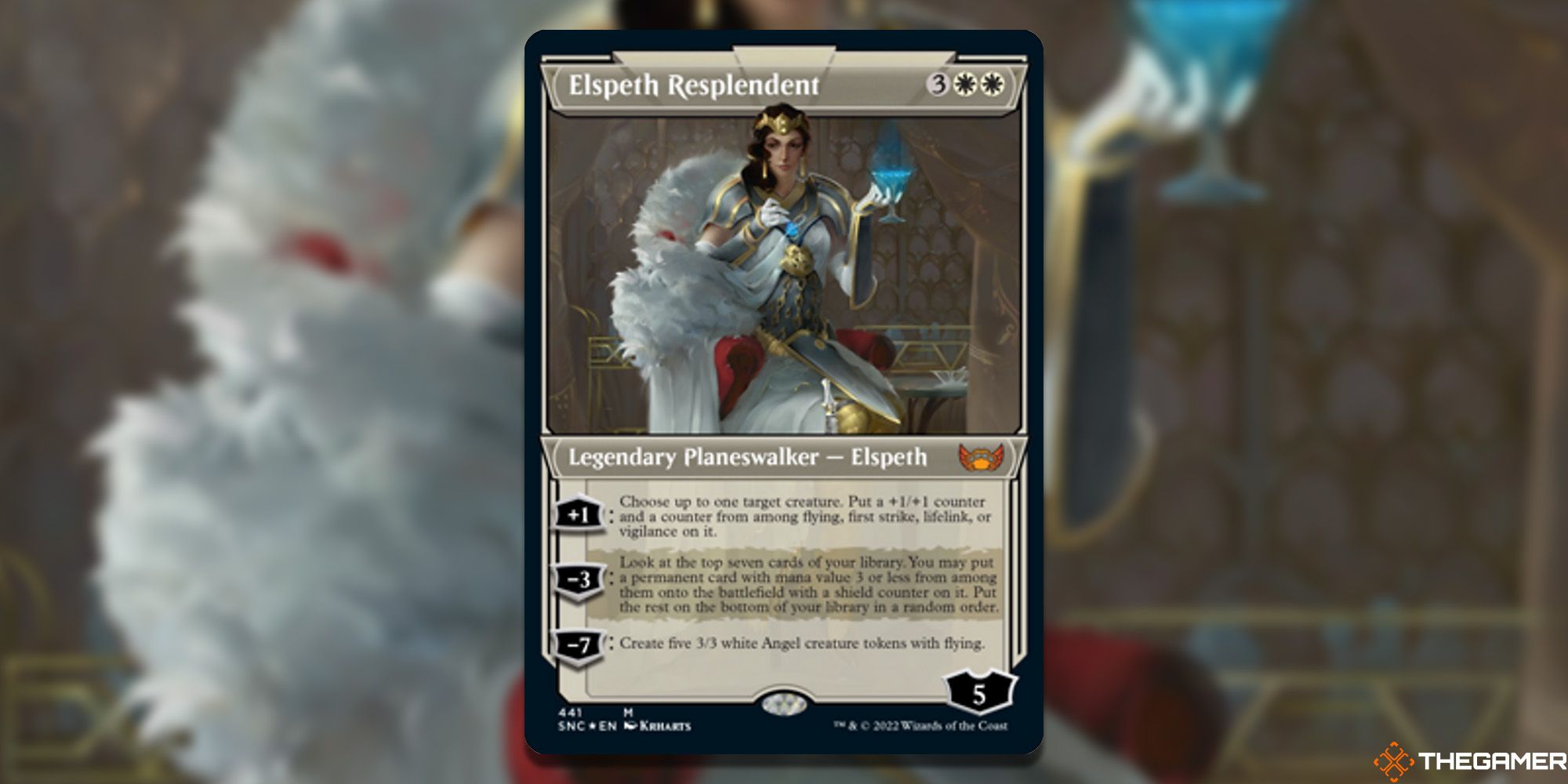 Another exclusive in collector's boosters is the main character of the New Capenna story, Elspeth. It's hard to look good when you launch in the same set as the ridiculously powerful Ob Nixilis, but Elspeth still does a good job. Her ability to put different kinds of counters on to creatures you control is great, and her ultimate ability to make five 3/3 flying angels isn't too difficult to activate.

Etched foil has been hit or miss ever since it debuted in Commander Legends. Sometimes we've had great applications of it, like in Modern Horizons 2 and Commander Legends, and other times it's been hard to notice, like in Strixhaven's Mystical Archive. New Capenna's plays closer to the Commander Legends model of having it highlight the entire card frame, and looks fantastic.

It's bizarre that both the tenth and top spots on this list are the exact same card, with the only difference being this version has the etched foil that can only be found in collector's boosters. Is the foiling really worth $130? Not at all, but that's not the point. This is an exclusive printing of a card that is going to be infamous in the same way Oko is, which makes it worth collecting.

Whether Ob Nixilis will get banned is up for debate, though right now it feels likely. The fact of the matter is that this is one of the best Planeswalker cards to have ever been printed, and people want the version with the luxury etched foiling of it. The price may slump as people work out ways around Ob Nixilis, or once the bans start trickling in, but for now he rules this most valuable cards list with an iron fist.