Within the lore of Magic: The Gathering, few events are as impactful as the Brothers' War. Though the event canonically took place in a bygone era and was first referenced within the earliest days of the game, through the power of time travel, Magic's most recent set, aptly named The Brothers' War shines a light on this major event in Magic's history.

As a major historic event for Magic's storyline, this set is filled with a litany of powerful new commander options that players can choose from when constructing a deck for Magic's best multiplayer-focused format. So let's examine the strongest new commanders featured in The Brothers' War.

7/7 Loran Of The Third Path

In recent years, it seems like nearly every new set introduces one or two solid new options for mono-white commanders, adding to white's power and flexibility in the Commander format, something which had long been questioned. An efficient commander for the cost of two mana, Loran of the Third Path is a creature that allows you to reliably access additional card draw on each of your turns in exchange for offering value to one of your opponents.

A 2/1 with vigilance, upon entering the battlefield, Loran can destroy up to one artifact or enchantment, potentially depriving an opponent of a key utility card or a mana rock. More importantly, at any time, Loran may be tapped, drawing you and an opponent of your turn each a card. This ability is deceptively strong, as you are always guaranteed a card while you can spread out the card advantage you provide to opponents, or offer cards to opponents in exchange for political favors. 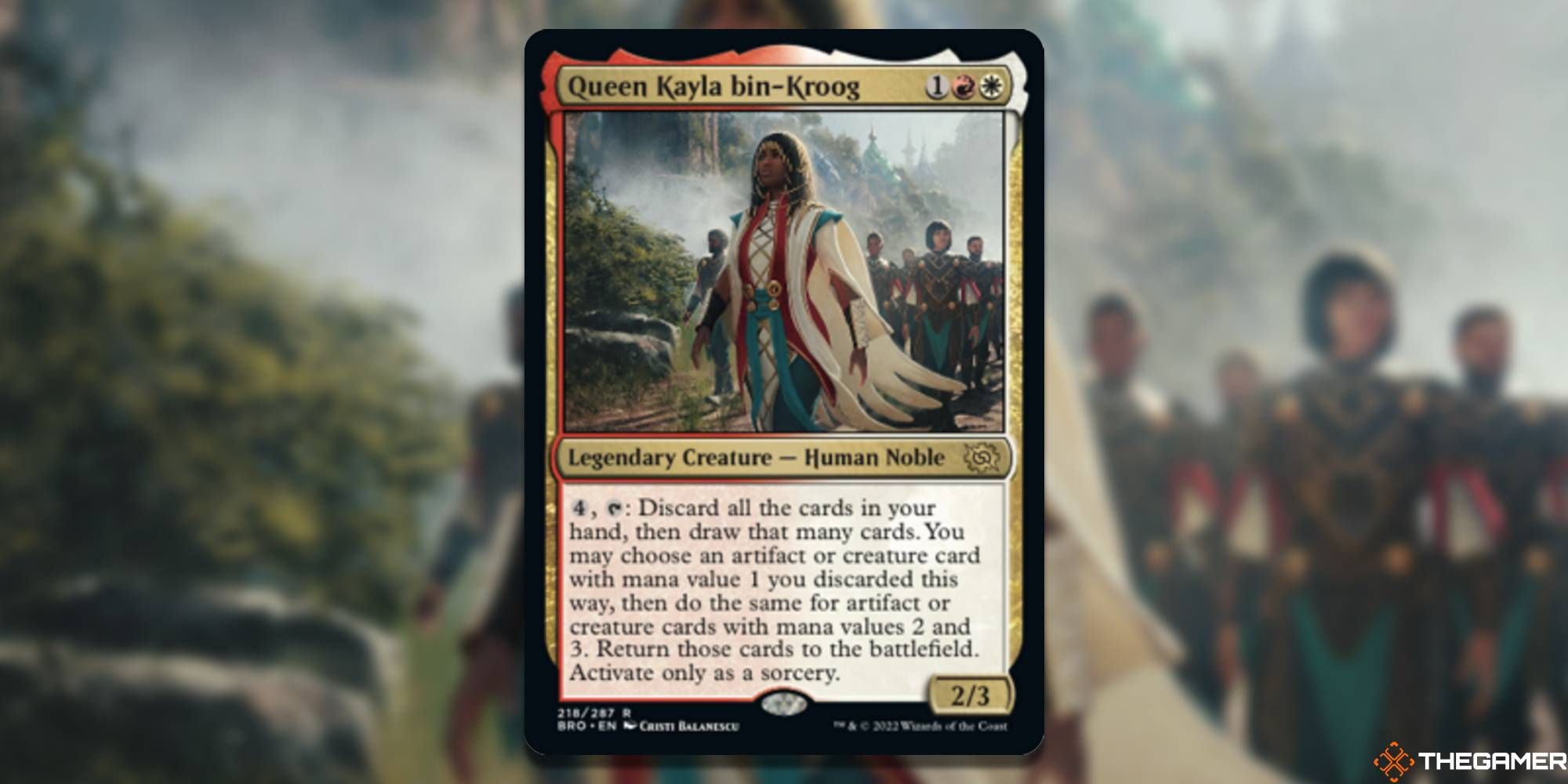 Picking up where the Lorehold faction of Strixhaven left off, Queen Kayla Bin-Kroog is a new Boros (red/white) commander that synergizes with artifacts in a powerful way. For three mana, this 1/3 Human Noble has a powerful activated ability that may be used for the cost of four mana, potentially generating a notable degree of value in the process.

Once activated, Kayla allows you to discard your hand, then re-draw that many cards. While the ability to dig through your deck via this wheel-like effect is nice, Kayla then allows you to play a one-mana artifact, a two-mana artifact, and a three-mana artifact from among the discarded cards without paying their mana costs. This means that Kayla not only helps dig for additional cards to play, but this card continuously allows you to put valuable cards, such as mana rocks and utility artifacts, into play as you do. 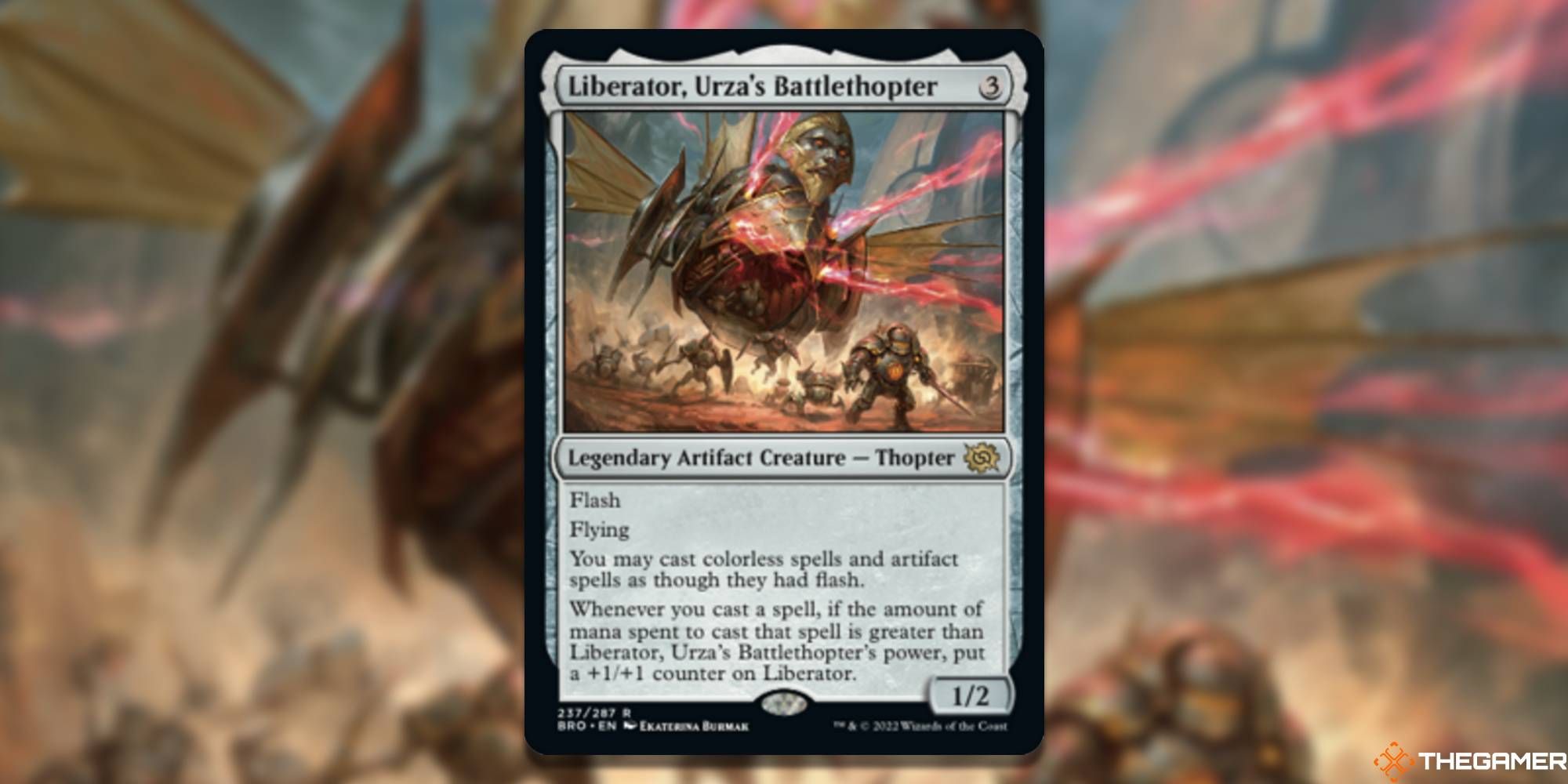 Liberator, Urza's Battlethopter is the newest available option for those looking to construct a colorless Commander deck. While Vedalken Orrery is an artifact that has long been considered by many to be a Commander staple, allowing you to cast each of your spells as though they had flash, Liberator, Urza's Battlethopter is effectively an aggressive Vedalken Orrery that can live in your Command Zone. A 1/2 with flash and flying for three mana, Liberator states that you may cast colorless spells and artifacts as though they have flash. As within a deck helmed by Liberator, these are the only types of spells that you can legally include in your deck; this commander allows you to cast each of your spells during your opponents' turns.

While this is already an impressive effect in its own right, Liberator can also serve as an offensive threat, as whenever you cast a spell, if the amount of mana spent to cast it was greater than its power, it gains a +1/+1 counter, allowing it to scale in strength as the game progresses.

One of the central figures of the Brother's War, Mishra is a solid new option for those looking to construct an aggresive, combat-focused Rakdos deck. For four mana, when this 3/5 attacks, each opponent loses one life, and you gain one life for each attacking creature you control. While this effect is solid, if you control a creature named Phyrexian Dragon Engine, those creatures meld into the devastating Mishra, Lost to Phyrexia.

Once melded, this massive 9/9 can trigger three potential modes of your choice, providing you access to six options, making it incredibly flexible. Mishra's triggered effects can deal direct damage, cause opponents to discard, destroy permanents, provide your creatures with evasion, provide a mini board-wipe, or even provide mana ramp, making it exceptionally multifarious.

While one major downside of this commander is the requirement to access Phyrexian Dragon Engine, black is the color with the easiest access to strong tutoring effects, allowing you to more readily access this commander's melded form. 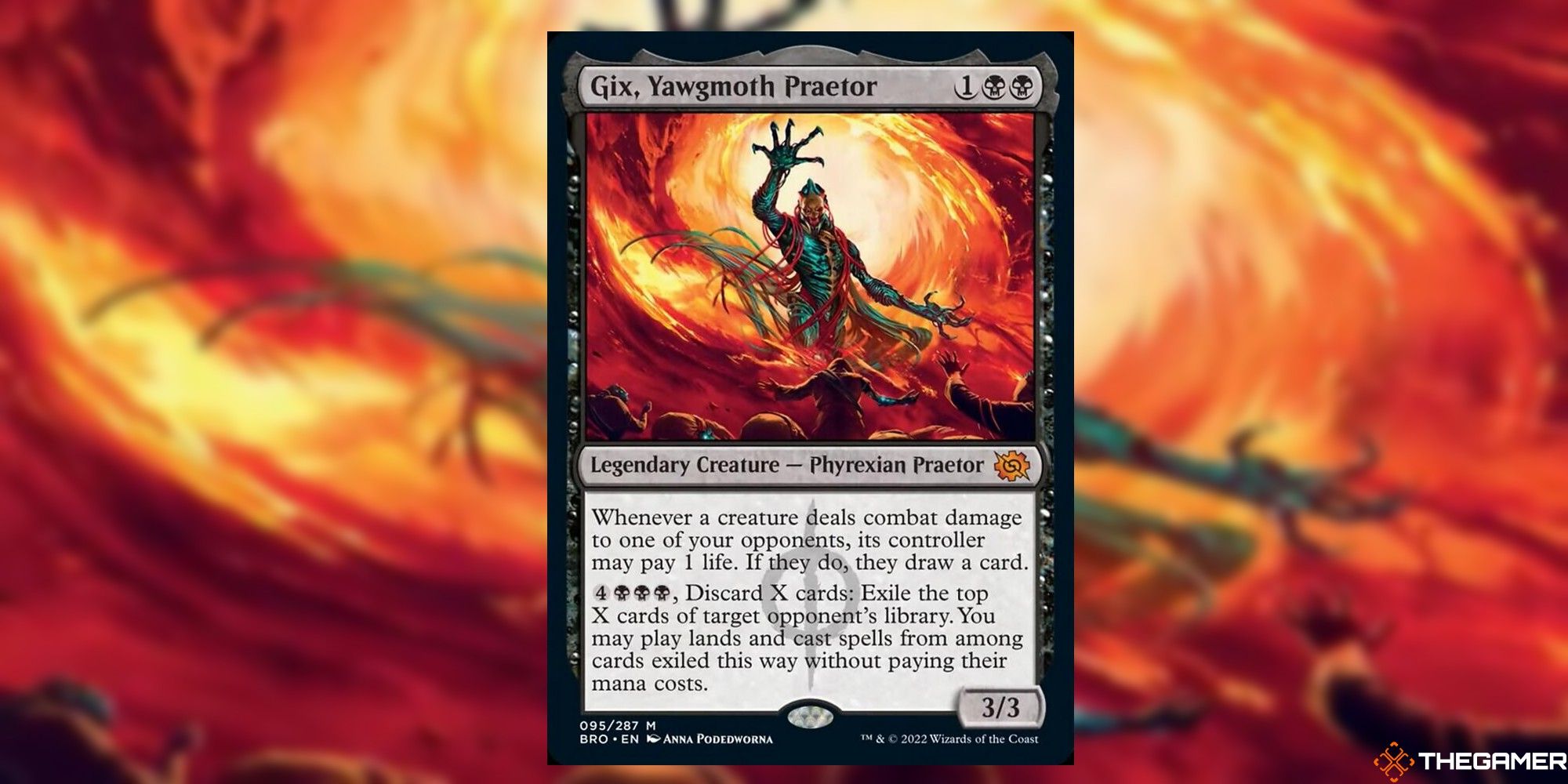 A stellar new mono-black commander option, Gix, Yawgmoth Praetor is an efficient three-mana Phyrexian Praetor that excels in providing card advantage. Whenever a creature deals damage to one of your opponents, that creature's controller can choose to pay one life to draw one card. While this allows your evasive creatures to reliably draw you additional spells to cast each turn, this effect strongly incentivizes your opponents to attack each other in the name of drawing additional cards. While this effect is quite strong by its own merit, Gix's seven-mana activated ability allows it to continue to provide value to your strategy well into the late game. 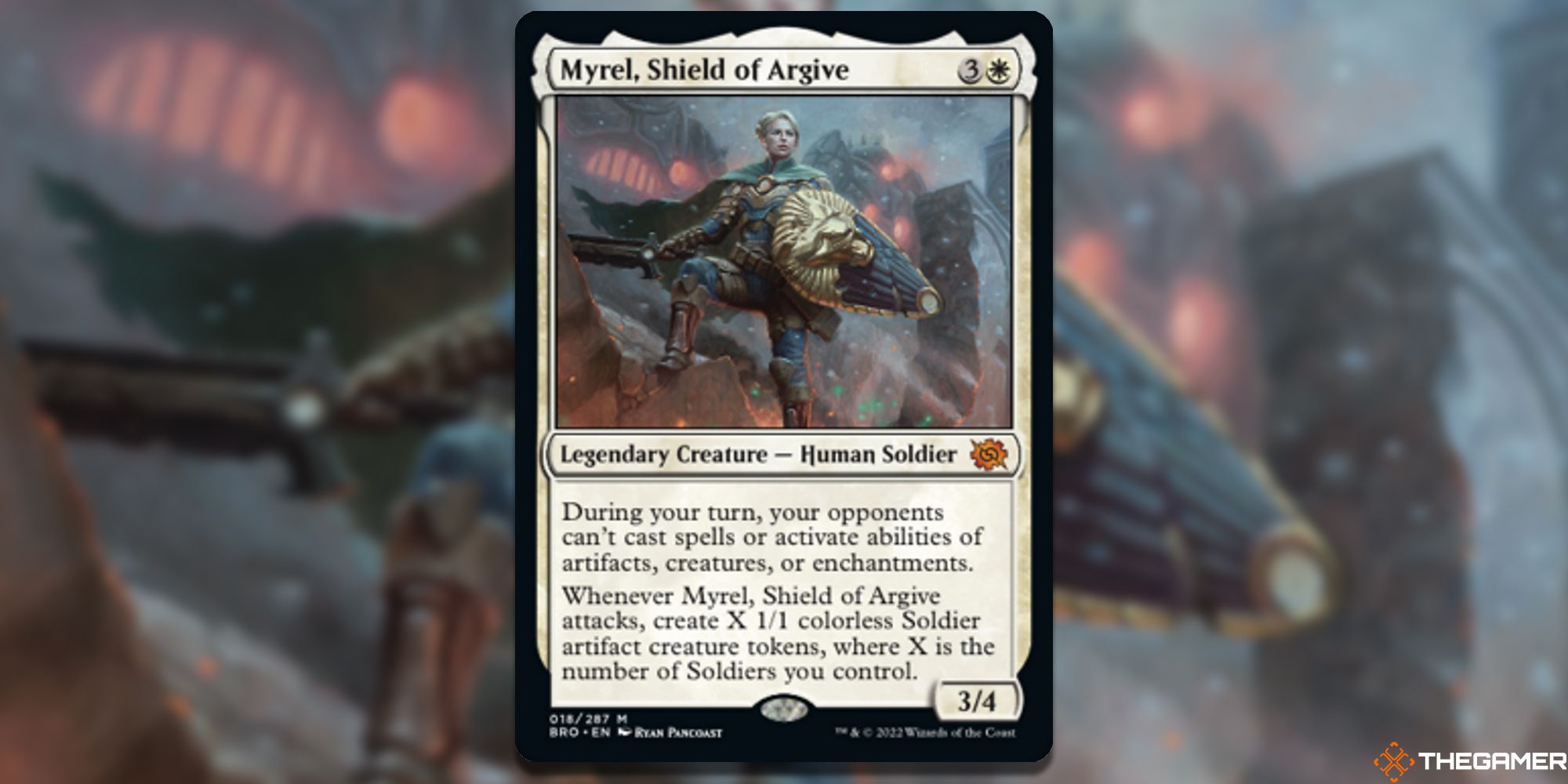 The new premier commander option for Soldier-tribal decks, Myrel, Shield of Argive is an incredible new mono-white commander that easily ranks among the strongest mono-white commanders that players can choose from. For four mana, this 3/4 Human Solider totes an ability reminiscent of that of Grand Abolisher, preventing your opponents from casting spells or activating abilities of artifacts, creatures, or enchantments during your turn, greatly helping you combat control decks.

In addition to helping to prevent your plans from being tampered with, Myrel offers a triggered ability reminiscent of that of the classic Goblin-Tribal commander, Krenko, Mob Boss. Upon attacking, Myrel creates a number of 1/1 colorless Soldier artifact creature tokens equal to the number of Soldiers you currently control, potentially doubling the number of creatures you control each turn. For those looking to construct an aggressive creature-focused White deck, Myrel, Shield of Argive is worth considering.

As Urza is perhaps the most impactful and influential figure in the history of Magic and the central character of the Brother's War, it's only fitting that Urza, Lord Protector, is among the strongest new commanders to be featured in the set. Upon entering the battlefield, Urza is a 2/4 Human Artificer who reduces the costs of artifacts, instants, and sorceries you cast. While this effect is useful in helping you cast your spells for a discounted rate, much like Mishra, Urza's greatest strength is found in its melded form.

Pairing with the five-mana artifact, The Mightstone and Weakstone, if you pay seven mana to active Urza's activated ability while this artifact is in play, these cards meld into Urza, Planeswalker, perhaps the most powerful Planeswalker card in Magic's history. While the Mightstone and Weakstone can't live with Urza within the Command Zone, Azorius (blue/white) has access to great card drawing and artifact-tutoring effects that can allow you to reliably access this card.

Once melded, Urza, Planeswalker has access to seven loyalty and an overwhelming five activated abilities. While the flexibility these abilities offer is already quite powerful, unlike other Planeswalkers that may only activate one ability per turn, you can instead activate two of Urza's abilities during each of your turns.

Retaining its synergy with artifacts, Urza can reduce the costs of artifacts you cast, draw you additional cards, create artifact creature tokens, exile your opponents' permanents, and even offer a one-sided board wipe through its -10 ultimate ability.