In Mario Strikers Battle League Football, you'll be competing in five-a-side football matches with chaotic, action-packed gameplay that combines the beautiful sport with a trademark Mario twist. Whether you're on your own or teaming up with friends and family, you're going to want to be at the top of your game at all times, since a single slip-up can be the difference between victory and defeat.

Although the game looks party-like on the surface, underneath that is a sophisticated title that rewards skilled gameplay. Playing lots of matches is one of the best ways to get better at Mario Strikers, but these tips and tricks will help you gain a deeper understanding of the game and fast-track your way to footballing success. 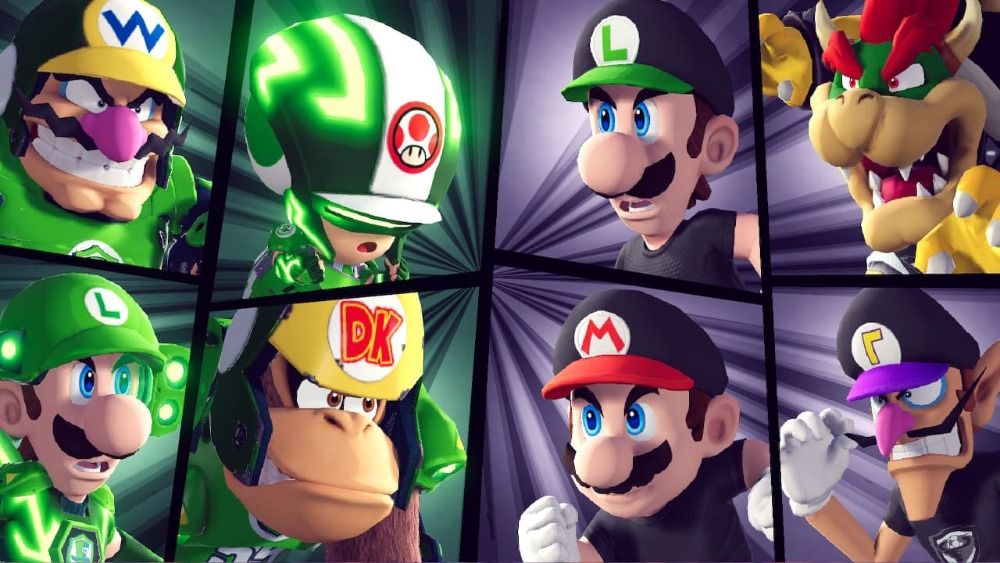 When you're playing online matches, you may notice that, although you can plough through some teams with ease, others will run rings around you, even though you're not doing anything differently. This is often because everybody has a different playstyle in Mario Strikers, and your personal strategies will work well against some players but not against others.

Rather than completely changing your gameplan to counter your opposition, you should instead work out what your playstyle is and build your strategy around that – for example, if you enjoy running down the wings and sending crosses into the box, consider adding some midfielders to your team with high speed and passing stats.

Your strategy will naturally counter some other strategies well, but will also be disadvantaged against certain players as well – try and think about how to alter your gameplan for specific scenarios. Building on the previous example, if your opponent has strong defenders that you struggle to run past, think about how you might pass around them, or take them out with items, before running down the line. 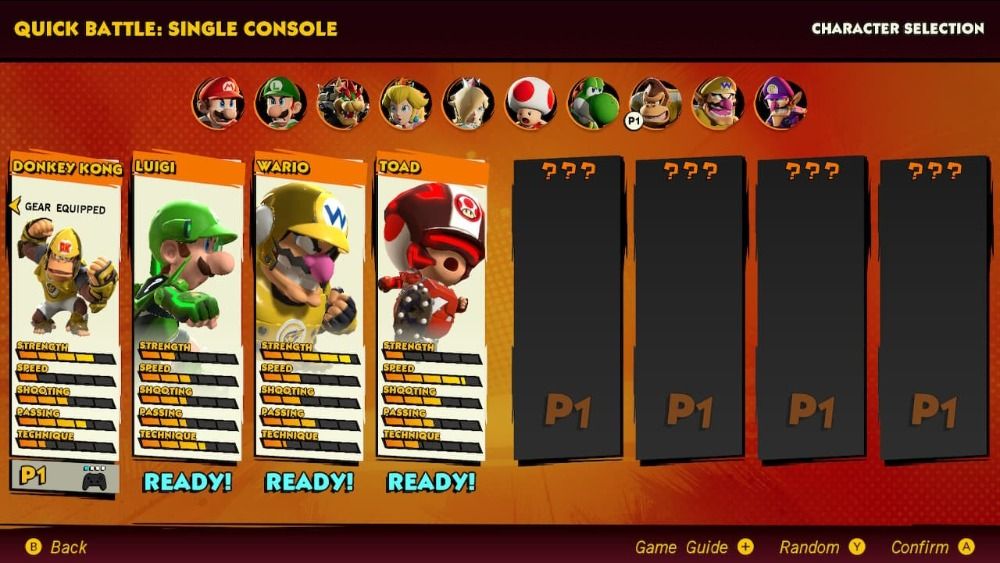 Your team composition will, in most cases, be influenced by your playstyle: building a team around how you like to play the game will lead to quick success. It is also a great idea to use gear to augment your team's capabilities, but how you do this is up to you. Rosalina is already very good at shooting, so you could give her gear to either increase her shooting even more, or increase her speed so that she ends up in more shooting scenarios – it will all depend on your personal preference.

You may also want to build your team around your favourite character. Pay attention to what they are good at and use your team composition to highlight this and also cover any weaknesses they may have.

Unleash Your Items At The Perfect Moment 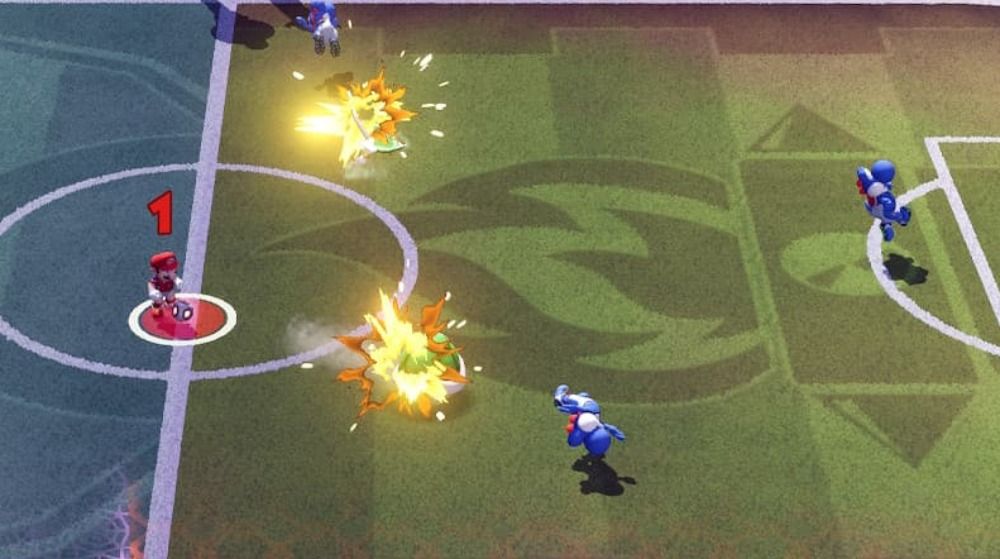 Items are incredibly powerful forces in Mario Strikers Battle League: they can be used to tactically take out opponents, to give you a free shot at goal, and to quickly swing the tide of the match in your favour. However, they must be used with caution, because wasting an item is just as bad as not using it at all – in some cases, it is worse since many items can harm your own team as much as the opposition. Make sure you have a reason for using your item before you unleash it.

It is a great idea to make yourself familiar with what each item does in detail and how they can each be used to maximum effect – did you know that you can't sprint while using a mushroom? Fortunately, we've got you covered with our in-depth item guide. 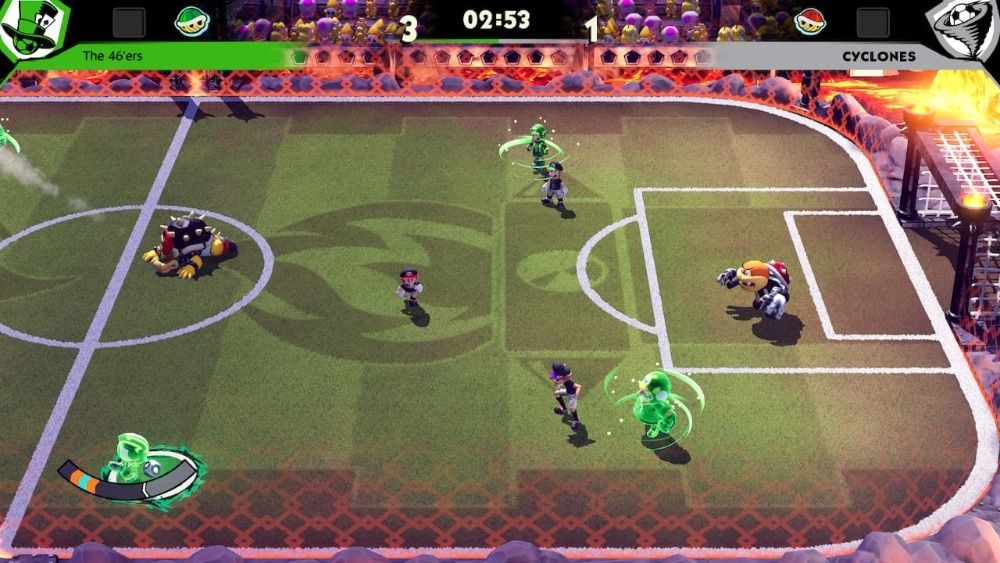 This one goes without saying, but whiffing a Hyper Strike is a terrible idea since it gives your opponent free possession. If you don't have the space to charge a Hyper Strike then you're better off not trying and just going for a regular chance at goal instead.

Using items is an excellent way of clearing some space while you charge your strike. In particular, using a star when you've picked up a strike orb will essentially guarantee you a Hyper Strike.

Learn When (Not) To Tackle 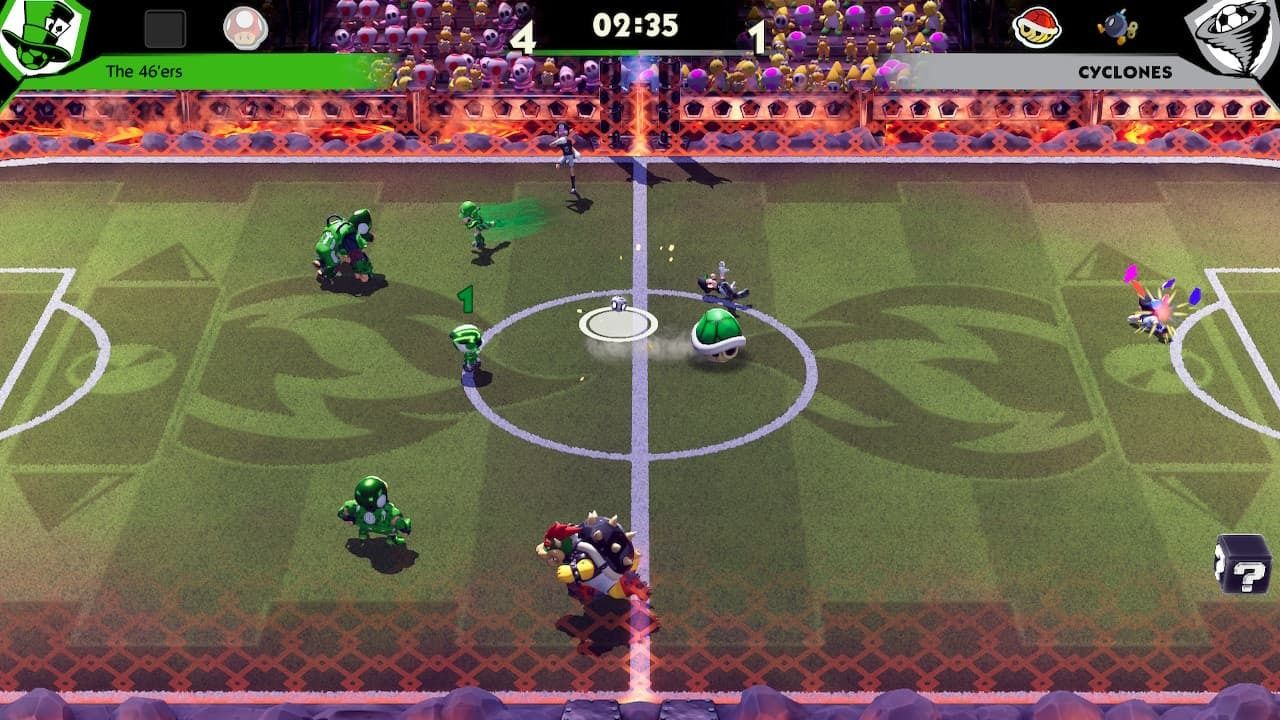 One of the things that defines Mario Strikers gameplay is that there are no fouls or free kicks; this makes tackling a potent defensive tool. You might think that, because of this, you should be tackling players all the time and leaving them constantly incapacitated. However, the game has a couple of subtle ways of punishing you for over-tackling.

If you whiff a charged tackle, you will be stunned for a few seconds yourself. Moreover, tackling an opponent who doesn't have the ball will cause an item box of the opposing team's colour to drop, essentially giving your opponents a free item. Both of these mechanics together mean that you should think about when to tackle: sometimes the free item box is worth it to take out a key player – for example, if they are receiving a pass.

If you're using characters with a low strength attribute, you will find that your tackles are often ineffective against bulkier opponents. Don't waste your time tackling an opponent if it's not going to do anything – instead, charge up a tackle to take them down.

Pull Off Perfect Moves Every Time 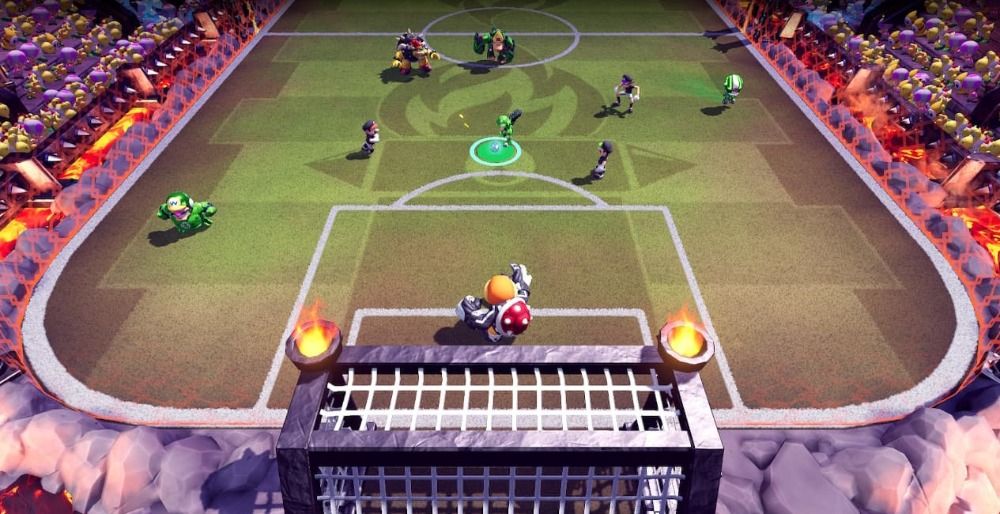 Perfect moves are where Mario Strikers Battle League gets most skillful: the timing is tough, but mastering it will massively improve your gameplay. Do you love playing a passing game but hate it when your opponent intercepts your passes? Perfect passes are the answer since they cannot be intercepted. Perfect shots are much more likely to go in, and perfect tackles allow you to cleanly take the ball and can also take down multiple opponents.

If you are struggling with the timing, especially in team comps where it is more important, you should consider improving the technique stat of some of you players, either by swapping them for other characters or by using gear. This stat is what determines how easy a perfect move is to hit for a player.

Master Passes, Through Balls, And Crosses 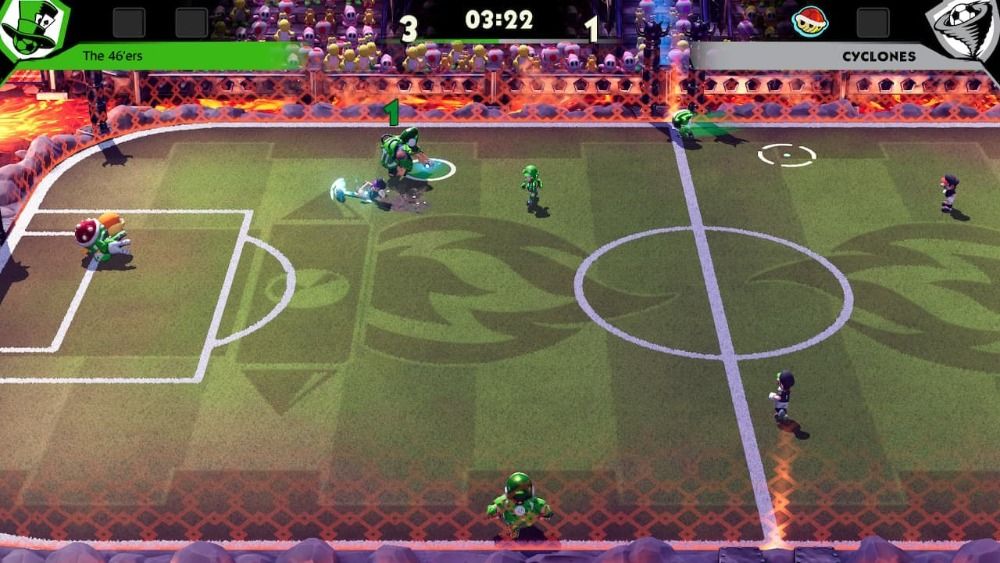 There are two types of passes in Mario Strikers Battle League: ground passes are the faster of the two but require less effort to intercept, whereas aerial passes travel more slowly but go over the opponents' heads. Each has its uses, and you should consider both as useful tools in specific situations.

Having a pass intercepted is a frustrating way to lose possession, but luckily there are a couple of things you can do about this. Firstly, mastering perfect passes will make it impossible for them to be intercepted, but failing this you can equip your team with strong passing stats to improve the power and accuracy of your passes.

You should also be comfortable with through balls and crosses. By holding down the L button while readying a pass, you can use the left analog stick to aim a pass anywhere you like, although how far you can aim is determined by your player's passing attribute. Use this to thread through balls between defenders and to send crosses into the mixer. Although it takes a bit of getting used to, these types of passes will save you many games by opening up more offensive opportunities. 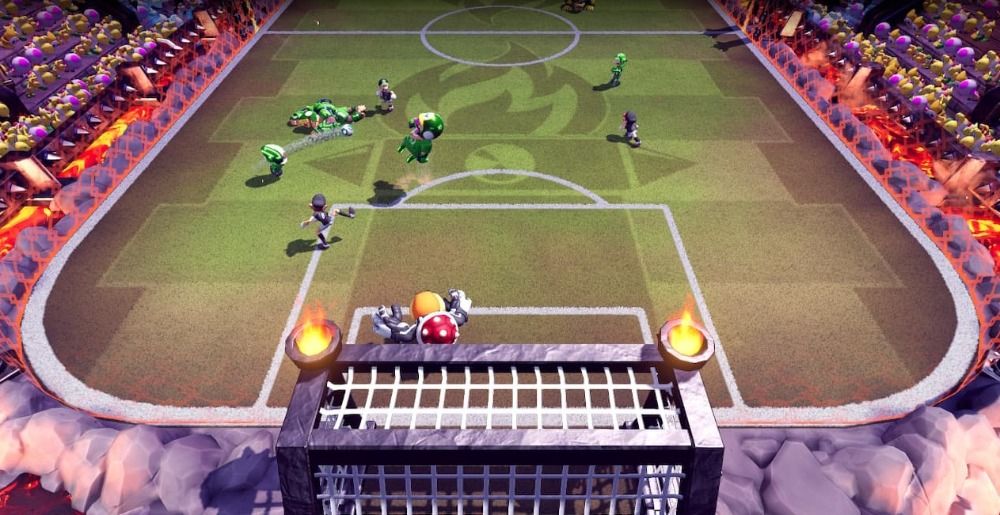 But, what should you do if your opponent has perfected their passing? You should, in turn, get good at intercepting their passes! Ground passes and through balls are more easily intercepted since they only require you to get between the passer and the receiver and take the ball. You can also take out the receiver with a tactical tackle.

To intercept an aerial pass, you'll have to stand near the receiver, in front of them, and press either B or Y to perform a first-time pass of your own before the ball can reach the receiver. The timing here is difficult and will take some practice, but it is definitely worth the effort.