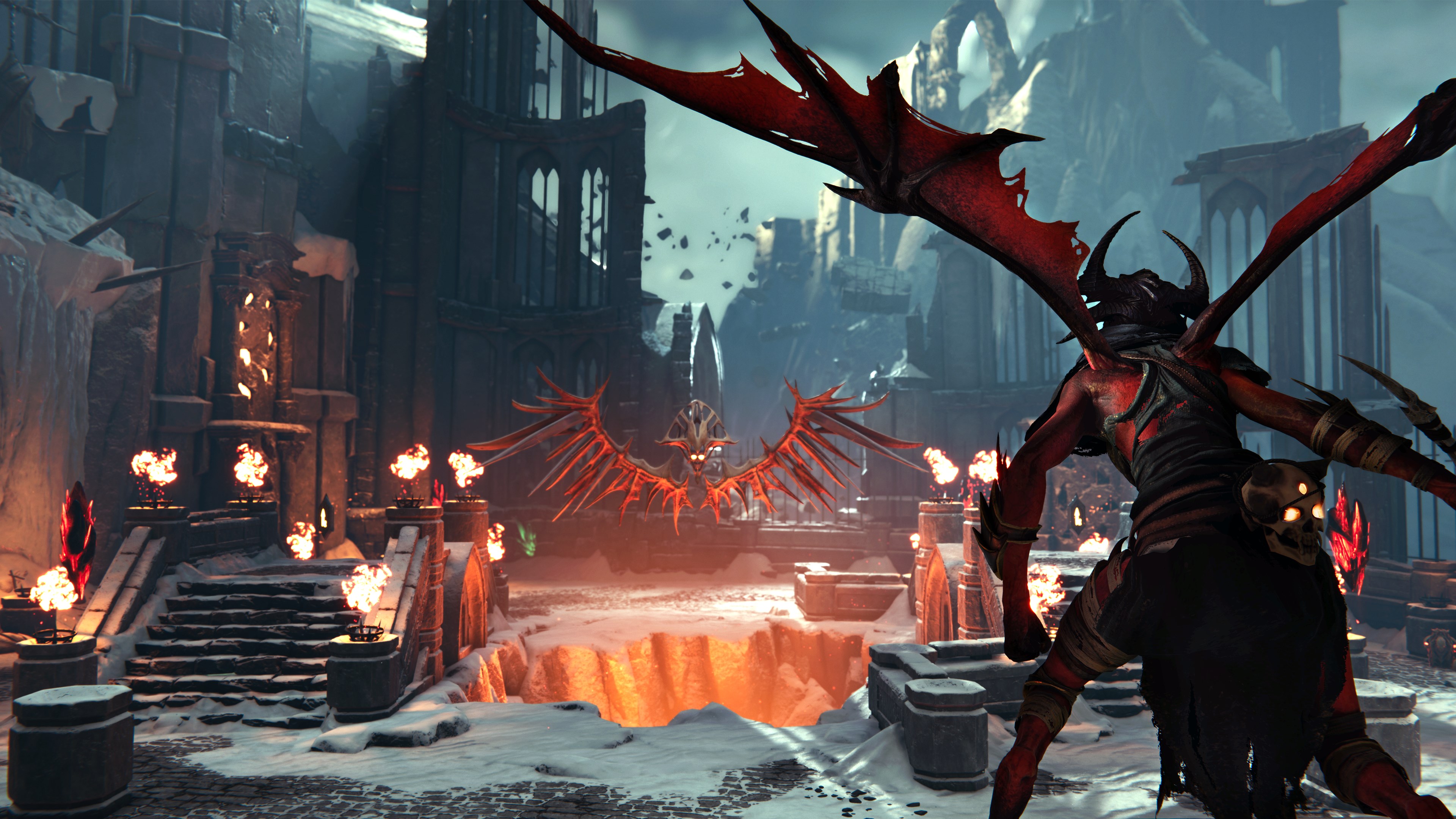 Take a journey to Hell in this brutal rhythm-based first person shooter, where keeping in time to the music is a life or death skill.

You might have thought Doom had already cornered the market on first person shooters set in Hell, that make judicious use of heavy metal imagery, but Metal: Hellsinger takes things a step further. Music flows through the veins of absolutely everything it does, as you not only have to take on the powers of Hell with a shotgun but make sure you’re doing so in time with the music. That simple premise describes the whole game and yet despite a few bum notes along the way it definitely rocks.

You play as a winged demoness called The Unknown and are accompanied on your trip through the realms of Hell by a flaming skull named Paz. The mission is simple: travel through the many rings of the world below to reclaim your voice, which is being held captive by The Judge. The narrative isn’t exactly complicated, but what’s interesting about the storytelling is that it uses a lavishly illustrated motion comic, with voiceovers, instead of in-engine cut scenes. The artwork looks like something straight off the cover of a new wave of British heavy metal or thrash album from the 80s and 90s, which seems entirely appropriate.

Metal: Hellsinger offers a vivid depiction of the Abrahamic afterlife, with strong art direction compensating for any technical limitations. The lighting is particularly lovely, especially in the wider open areas, which are illuminated by bubbling lava lakes and scarred skies. The game has some of the most creative interpretations of the underworld since Hellblade: Senua’s Sacrifice and it all fits the tone perfectly.

Where Metal: Hellsinger differs from your standard run of the mill arena-based first person shooter is how you’re required to stay in time with the beat, in order to adequately deal with the demons at the door. Fortunately, the game does a great job of helping you, as there’s a Guitar Hero-esque visual indicator over your crosshairs. Including the lengthy tutorial area, you’ve got a total of nine substantial levels to play through, complete with their own dedicated songs. For a first run-through, you’re looking at between six to eight hours depending on your skill level.

It may take some getting used to, but by the time you enter Voke and Stygnia, the game’s second and third levels, you’ll likely be in the groove of things. The variety of weapons isn’t too extensive, but every gun and melee option feels suitably powerful. The game shares more DNA with People Can Fly’s Painkiller than a more modern title such as the Doom reboot and as such, there’s a total of six instruments of pain you can take to the stage, with a maximum of four being allowed at any one time.

This limitation adds a degree of strategy: do you want to go in guns blazing with twin, lead-spitting revolvers for damage and distance or get up close and personal by utilising the mother of all shotguns? Every weapon has its place and your first playthrough will reveal to you which firearms to take in, to maximise your run times and overall score. If you run out of ammo though, you always have access to Paz, who is in touch with the ‘pulse of the universe’, and Terminus, a falx blade forged from the scythe of an archdevil.

Metal is integral to the flow of this game, and that’s evident in more than just the soundtrack; references come in thick and fast, with The Unknown herself said to have come from South of Heaven (one of Slayer’s most well-regarded albums). I also appreciated the Ride the Lightning call back during one intense encounter, complete with Hetfield-inspired sting.

It should come as no surprise that the music of Metal: Hellsinger is the real star of the show. Talented vocalists from across the genre lend their voices to the soundtrack of modern industrial metal, with particular highlights including tracks featuring Björn Strid (Soilwork), Mikael Stanne (Dark Tranquillity; The Halo Effect), Matt Heafy (Trivium), and Randy Blythe (Lamb of God). There’s also the scored finale featuring System of a Down’s very own Serj Tankian, with the Armenian American singer creating an epic soundscape to finish off the game.

If you’re a metal fan, then hearing the vocals kick in at the title’s more intense times is incredibly motivating. Unfortunately though, that only happens when performing well, as a scored multiplier of either 8x or 16x is needed for the songs, with vocals, to play in full. It’s your reward for doing well, but it also means that if you’re faring poorly then you’re missing out on one of the game’s main draws.

There’s nothing quite like tearing through vicious demon hordes, shotgun in hand, with the backing of Speed’s guttural growl. It’s unfortunate then, that Metal: Hellsinger suffers from some underwhelming and repetitive boss fights, which mar the overall experience. In order to take on The Judge, you must first destroy his seven Aspects. These winged entities, which clearly take some inspiration from Overkill’s Chaly mascot, are entertaining during the first encounter but become very played out when you’ve killed the same enemy type a total of seven times in a row.

Each has minor variations, but it isn’t enough to distract from the fact that they all have to be dealt with in the same basic way. It’s a surprising fault, as the regular enemies are incredibly varied, with 10 different demon types coming at you at any one time.

Metal: Hellsinger is an old school game in its approach to difficulty; if you’re after an easy time even on ‘Goat’ difficulty, the game’s version of medium, you’ll find that death comes quickly and without mercy. The playing field is levelled somewhat when factoring in slaughter kills, which are basically Doom Eternal glory kills with the serial numbers filed off, and work in the same fashion.

Despite what you’d imagine though, and in spite of all the obvious influences, the rest of the game is still very much its own beast. It has its flaws, most of which, sadly, seem like they could’ve been easily avoided, but overall it’s a great game whether you’re into metal or not. In the almighty words of Metallica: ‘Kill ‘em all!’.

In Short: More than just a Doom clone and despite faltering during what should be the game’s highlights this is an enjoyable romp for both metal and shooter fans alike.

Pros: Each realm of Hell is very distinct and the various guns and swords are satisfying to use. Great use of original music, with some of metal’s greatest vocalists. Neat story cut scenes.

Cons: Consistently disappointing boss fights and a weak ending. If you’re not doing well you miss out on all the vocals. Expensive given the relatively short length.