The Wild Update added as part of Minecraft 1.19 brought a slew of new features to the game. Many such features revolve around the new Deep Dark biome, a spooky environment far underground that is both treacherous and rewarding.

The main reason the Deep Dark is so dangerous to explore is the Warden, who, as the name suggests, guards the biome and the treasures it contains. The Warden is on a power level hitherto unseen in Minecraft, so taking one on is no mean feat. Luckily, this guide will walk you through exactly how the new mob operates, to give you a fighting chance against this blind behemoth.

What Is The Warden? 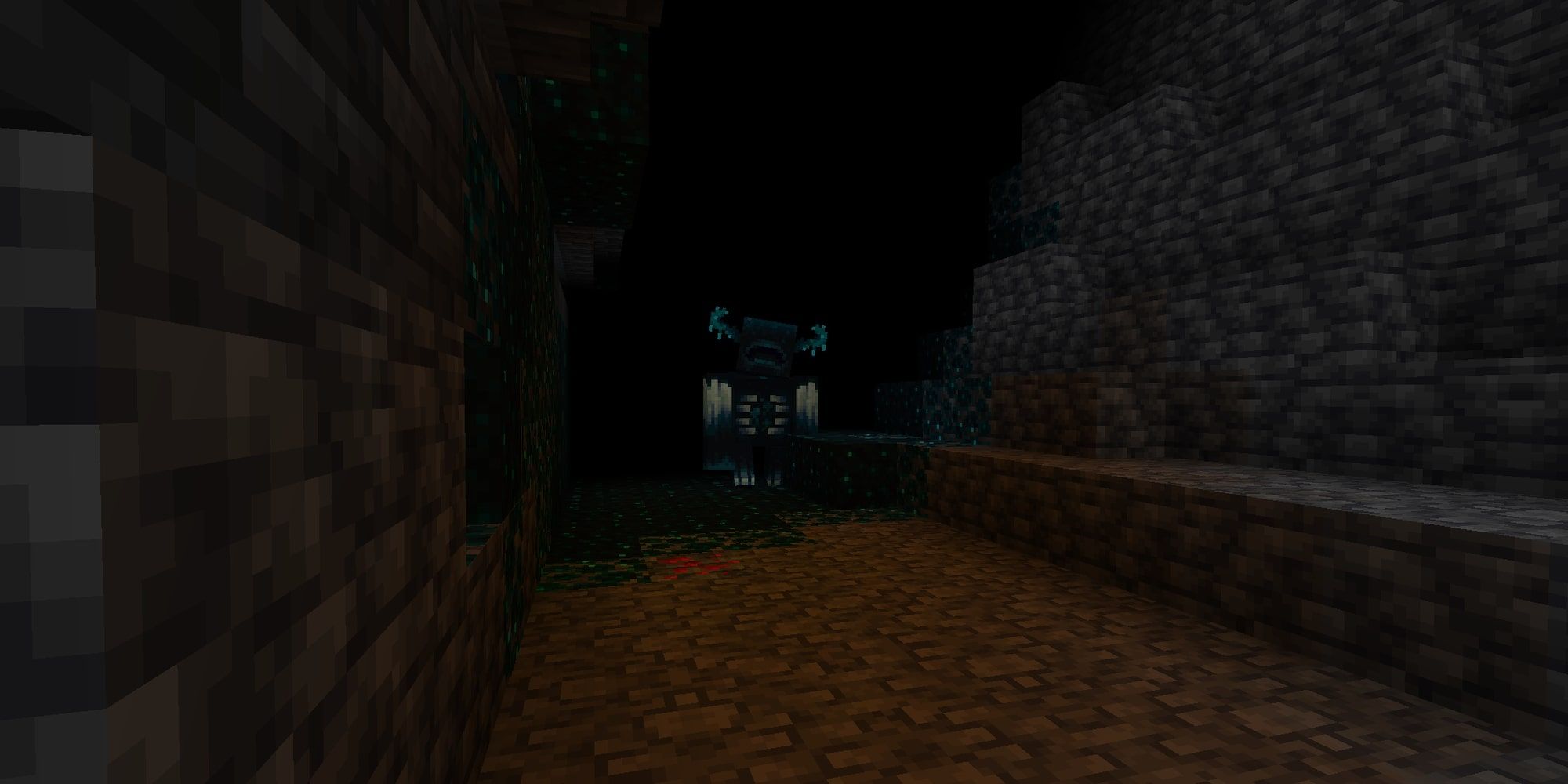 The Warden is a special mob that can only spawn in the Deep Dark. It is incredibly tanky, having 500 health points (250 hearts) — equivalent to the Ender Dragon and Wither combined! It is also remarkably strong, as its melee attack can deal as much as 22.5 hearts of damage if you're playing on hard mode.

The Warden's only real weakness is that it's blind, but to compensate for this it has exceptional senses of smell and hearing. Like Sculk, it's sensitive to vibrations, and will pathfind in the direction of anything it hears, or any vibrations passed onto it from a Sculk sensor. Once it picks up a player's scent, it will relentlessly pathfind straight to them.

How Does The Warden Spawn? 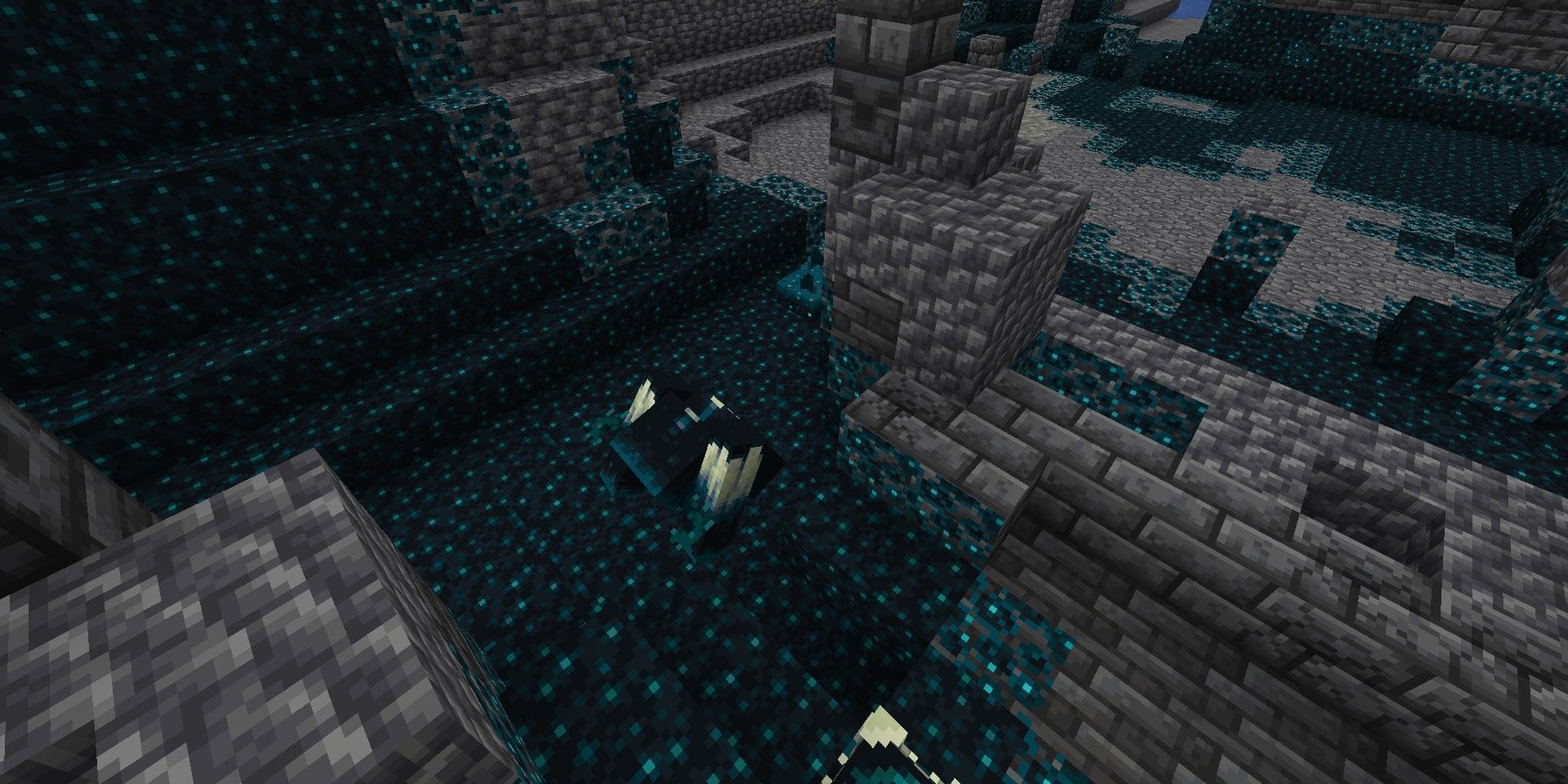 The Warden doesn't spawn like regular mobs, simply popping into existence in areas of low light level the right distance from the player. Instead, the Warden's arrival is triggered by Sculk Shriekers, the Sculk blocks with four white bits popping up at the corners.

Sculk Shriekers activate whenever they receive vibrations caused by player action — walking, placing or destroying blocks, opening chests, etc. They can pick up these vibrations directly, or have them passed on by Sculk Sensors. Just because you don't see a Shrieker in the immediate vicinity, that doesn't mean you're safe if there are still Sensors around. You can surround Sculk Sensors and Shriekers with wool or carpet to prevent them picking up noise, or just destroy them, if you want to explore the Ancient Cities safely.

As their name suggests, Sculk Shriekers let out a blood-curdling scream when activated. After this scream ends, all players in the vicinity are inflicted with 12 seconds of the disorienting "darkness" effect, which essentially blinds the player on and off. There's an even worse effect of Shrieker activation, though — they summon the Warden.

The specifics of Warden summoning are a little technical, but essentially, there's a hidden counter for the number of Shriekers you activate. You can activate three Shriekers, and all that'll happen is you'll be repeatedly blinded, but once you activate a fourth Shrieker, the Warden will spawn. This hidden counter is independent of individual Shriekers, meaning it doesn't matter if you activate the same Shrieker four times, or four different Shriekers. The counter is player-specific, however, meaning that if you've activated three Shriekers and then your friend activates one, you're safe — their activation will go towards their hidden counter instead of yours.

After the counter has hit four, any subsequent Shrieker activations also have the potential to spawn a Warden, if the conditions are met. Wardens' spawning conditions are as follows:

If these conditions are met, a fifth (sixth, seventh, and so on) Shrieker activation will spawn another Warden, regardless of how many Wardens have already spawned. The good news is that your counter can decrease. For every ten minutes you go without activating a Shrieker, your counter decreases by one, meaning that if you go 40 minutes without triggering any Shriekers, you'll be back to zero (assuming you were only at four). You'll then have your three-Shrieker leeway back for exploring the Deep Dark.

What Does The Warden Do? 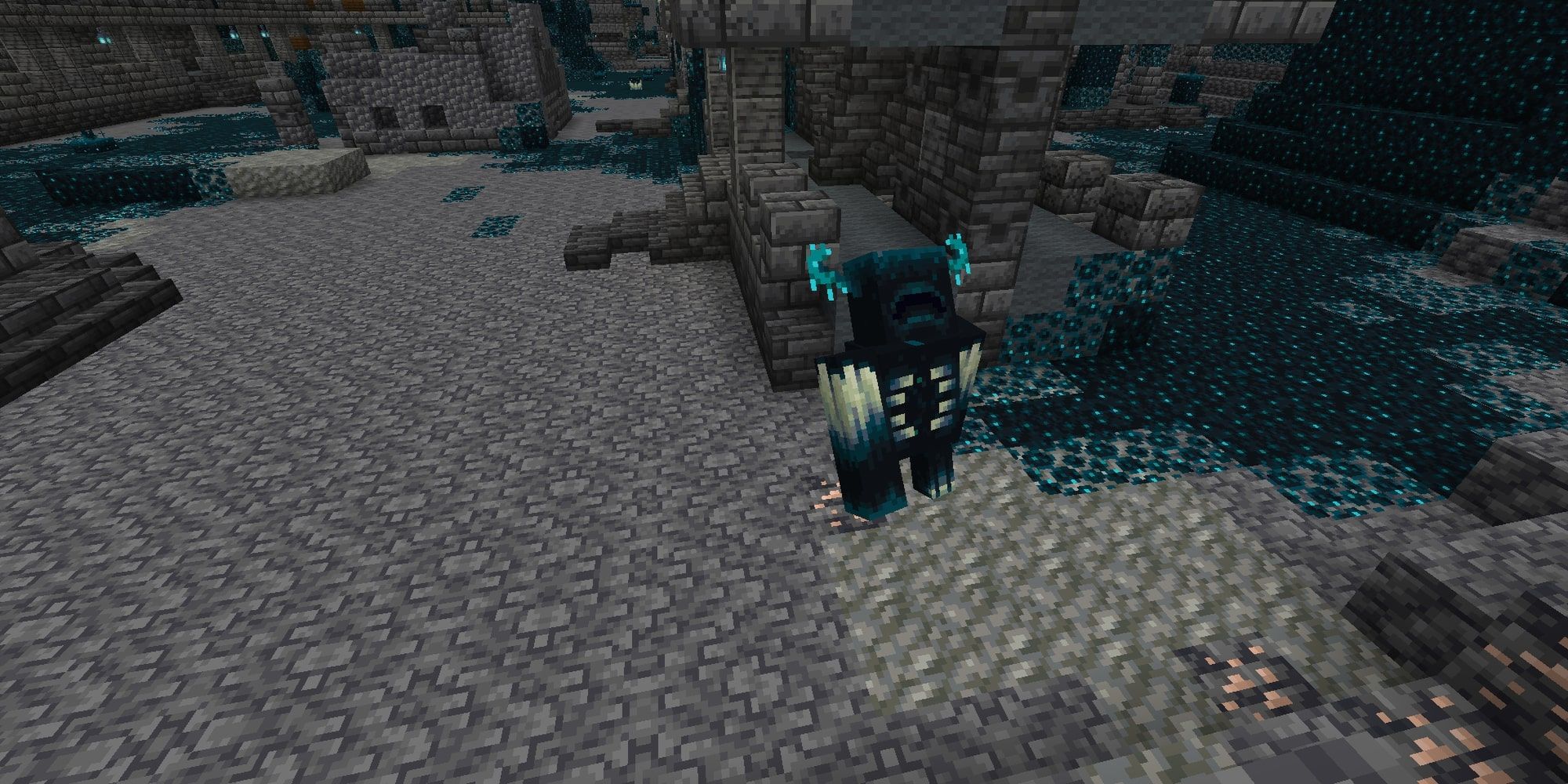 Despite how scary it is, simply spawning a Warden doesn't actually sign your death warrant. Upon spawning in, all it knows is that someone set off a Shrieker, and being blind, it can't exactly look to see who's standing right next to one. Because of this, the state the Warden spawns in is the calmer of its two states. Its default behaviour in this state is simply wandering around at random. The Warden also has a passive heartbeat effect that inflicts constant darkness on anyone in the vicinity – essentially a non-stop Shrieker blindness.

The calm state begins to change whenever the Warden picks up vibrations. It can hear any vibrations around it in a 16-block radius, and pathfinds towards them as it hears them. You can take advantage of this to distract it and make an escape – throwing snowballs or other projectiles will send the Warden off to investigate where they landed, allowing you to divert it off in the opposite direction to your escape route.

How To Avoid The Warden 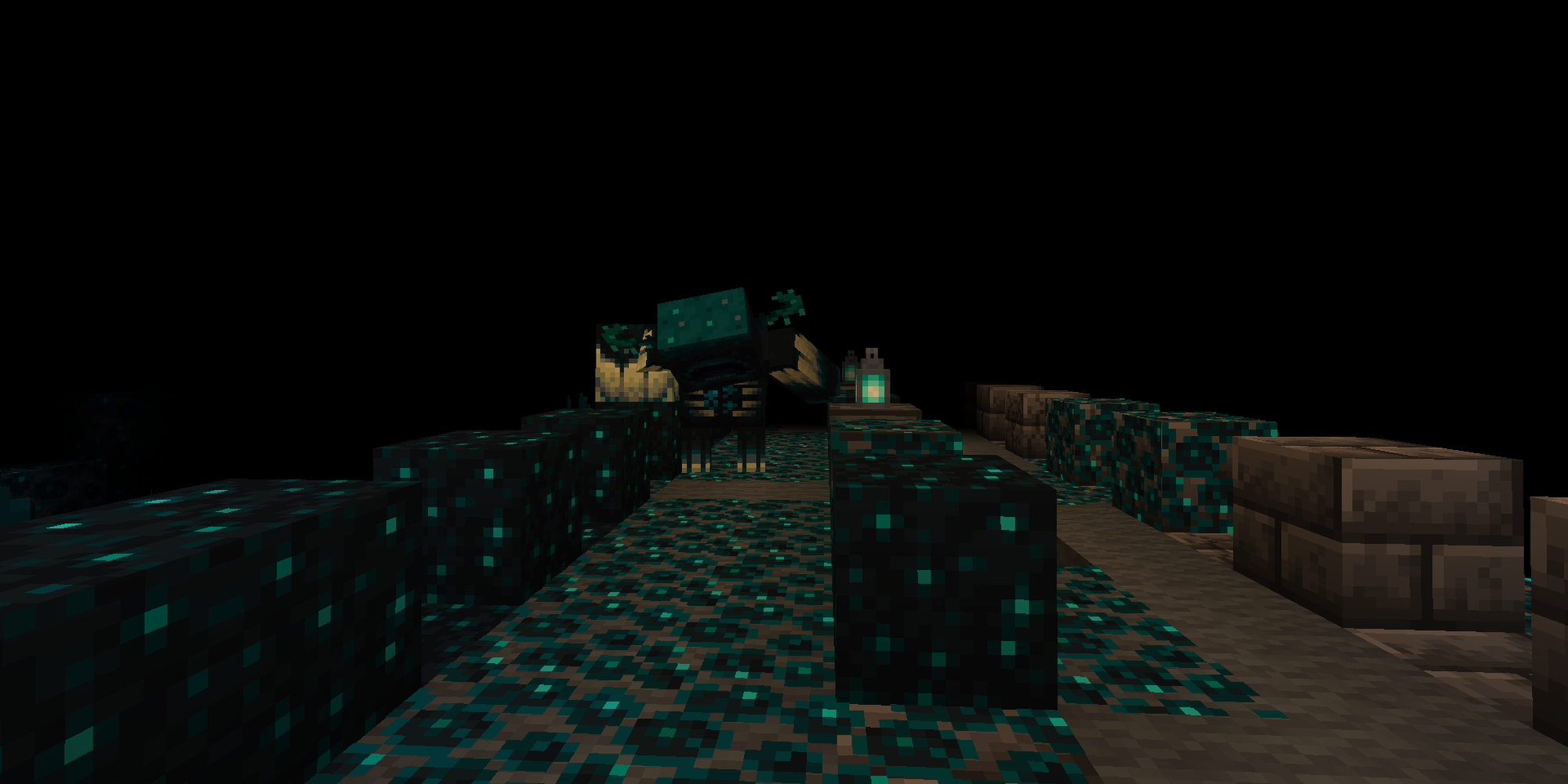 There are other ways to increase the Warden's anger – every five to ten seconds while calm, it sniffs the surroundings, and adds 35 anger to the nearest player or mob, so keep away. Similarly, bumping into it will add 35 anger, and attacking it will add a whopping 100 anger, instantly enraging it.

Once in an enraged state, the Warden's sense of smell takes over, latching onto whoever enraged it like a bloodhound and pursuing them relentlessly, ignoring any and all vibrations. At this point, the Warden essentially pathfinds as if it can see its target.

The real key to "beating" the Warden is that if it is left in its calm state for 60 seconds, it will burrow back underground and despawn, so once one spawns in, get out of detection range and wait out the minute for it to go back underground. This really is your best hope, as the Warden's attacks are formidable.

What Are The Warden's Attacks? 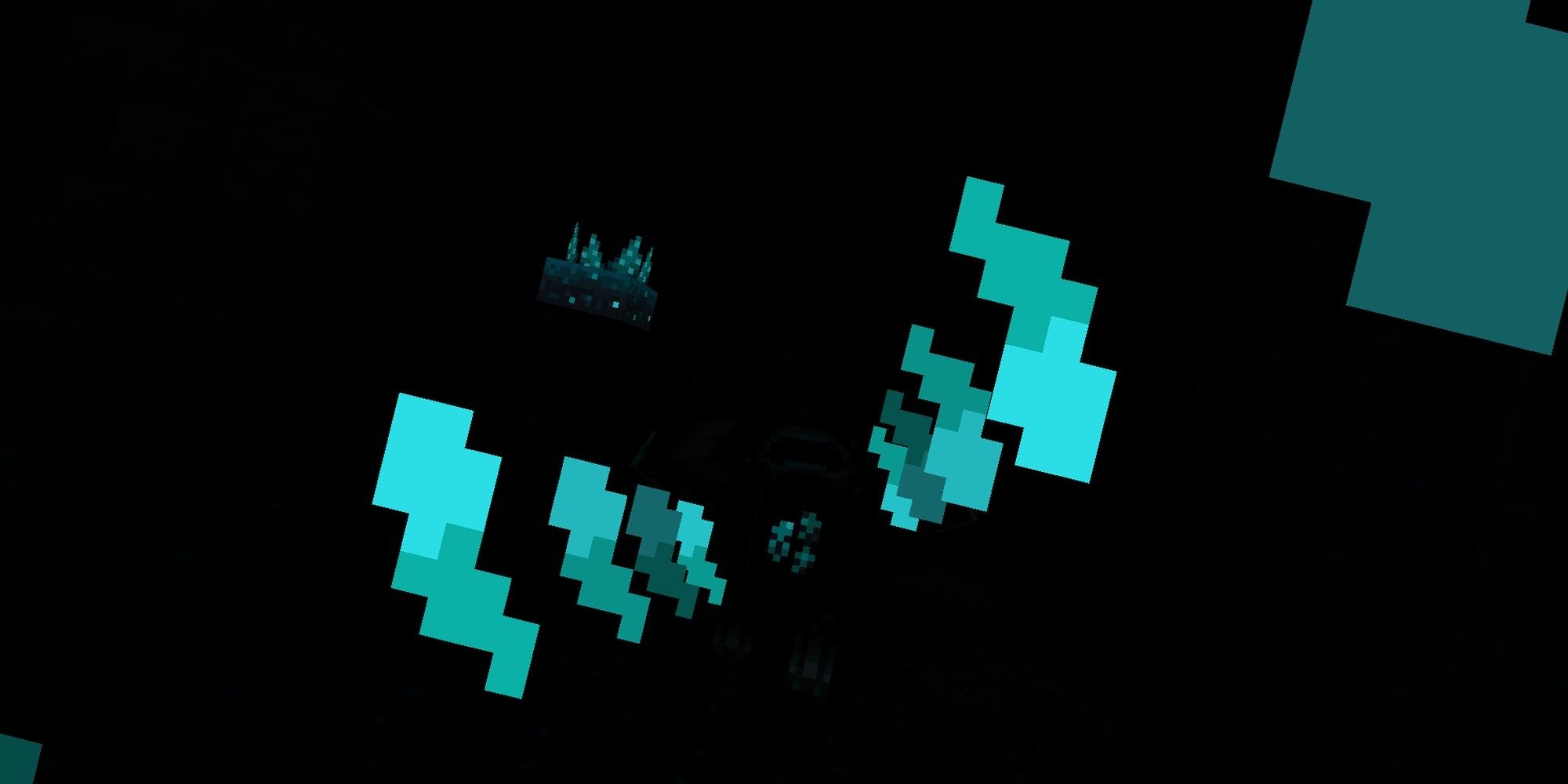 The Warden's default attack is a melee it can use every 0.9 seconds, dealing between eight and 22.5 hearts of damage depending on your difficulty, and disabling your shield for five seconds. This alone is a brutal attack, but the Warden also has a special move it can use to hunt down elusive prey.

If a player is hiding behind a wall or up on a pillar, the Warden charges up its sonic boom attack. This is essentially a sound-based laser that has a 20-block range and goes through walls. The attack hits for three to seven-and-a-half hearts of damage, depending on difficulty, but that's not the whole picture. The sonic boom bypasses all armour and enchantments, meaning that on hard mode, even if you have full Netherite armour with Protection IV, the Warden's sonic boom will knock three quarters off your health.

To top it off, the Warden has a whopping 250 hearts itself, meaning that even if you can somehow survive its onslaught long enough to fight back, any damage you deal will just be a drop in the ocean of its massive health pool. Furthermore, the Warden is immune to knockback, and doesn't take any damage from fire and lava.

As mentioned above, the best solution for how to beat the Warden is to simply keep well clear of it and wait for it to despawn. This is a monster unlike anything seen before in Minecraft, so just fighting it simply isn't the wisest move. If you are brave enough to take it on – good luck. You'll need it.