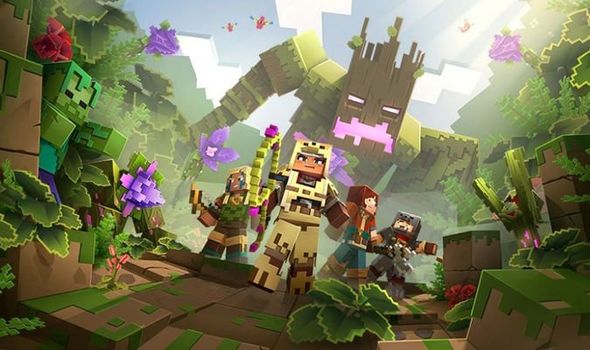 This week will Microsoft launch the new Flames of the Nether DLC in Minecraft Dungeons, complete with new maps, mobs, and items, as well as new systems and enchantments for everyone to enjoy for free.

Much of what is being prepared will be part of the paid content coming with the Nether update, following on from the Jungle Awakens, Creeping Winter, and Howling Peaks expansions.

And Microsoft has been bust laying out everything that is being planned for the upcoming expansion, including when to expect it.

According to developers Mojang, Minecraft Dungeons Nether DLC will arrive on Wednesday, February 24.

We don’t have a set release time for when the big update will arrive but it seems likely that the game’s official social media account will confirm when everything is available to download.

When the Flames of Nether does arrive on February 24, the DLC will be available for $5.99 USD and is also included as the second DLC for those that own the Minecraft Dungeons Season Pass.

Mojang has confirmed that the paid content will include six new Nether missions, new enemies from the Nether, New weapons, gear, and artifacts, as well as two new skins and a Baby Ghast pet.

And alongside the official DLC, Microsoft is also making some sizable changes to the base game.

Along with the release of the paid expansion, there is also a free update coming with several new features.

The Ancient Hunts are the most exciting of these new features, bringing procedurally-generated end-game missions that weave in and out of the Nether.

To access the Ancient Hunts, you’ll need to sacrifice items and Enchantment Points that will change the way your mission unfolds and what loot you’ll receive at the end. And if you want that mega-rare and brand-new Gilded gear, you’ll have to take on the Ancient Hunts and defeat the elusive Ancient mobs.

Meanwhile, Gilded gear drops are part of the free update as ultra-rare items with an extra Enchantment slot built-in, making them some of the most powerful items in the game. To get these end-game level items, you’ll have to face the Ancient Hunts as an exclusive path to earning the best stuff.

However, it should be noted that The Ancient Hunts only unlock for players after they’ve reached sufficiently high difficulties (starting at Default V).

A message from Mojang explains: “You’ll need to select items as part of an offering to begin an Ancient Hunt.

“These items will be destroyed once you offer them, so choose carefully! Remember, these powerful mobs are very selective and won’t show up for just any random things in your inventory.

“As a rule, you’ll need to offer up items that have a combined power of at least 100. Hey, we didn’t say that getting Gilded items would be easy! You can also offer Enchantment Points to increase the odds of an Ancient mob spawning during the Ancient Hunt.

“Once you make your offering, it’s off to the Ancient Hunt. Don’t worry, if you need to take a breather from the challenge and leave the Ancient Hunt part-way through, you can pick up it up again later with at least some of your progress saved.”