Magic: The Gathering and Dungeons & Dragons have crossed over again to bring you Commander Legends: Battle For Baldur's Gate. Exit from Exile is the Gruul (green and red) Commander precon deck featuring Faldorn, Dread Wolf Herald, an up-and-coming Gruul commander everyone will want to build around, which allows you to play things from exile to grow an army of Wolves. Anything that allows cards to be cast from exile synergizes well with Faldorn, which means there's a lot of room for upgrades.

Between cascade, adventure, suspend, and red’s ability to put cards in exile and play them, there are a lot of methods at your disposal to generate an army of wolves. Quite a few cards are inexpensive, too, allowing you to upgrade Exit from Exile without breaking the bank. 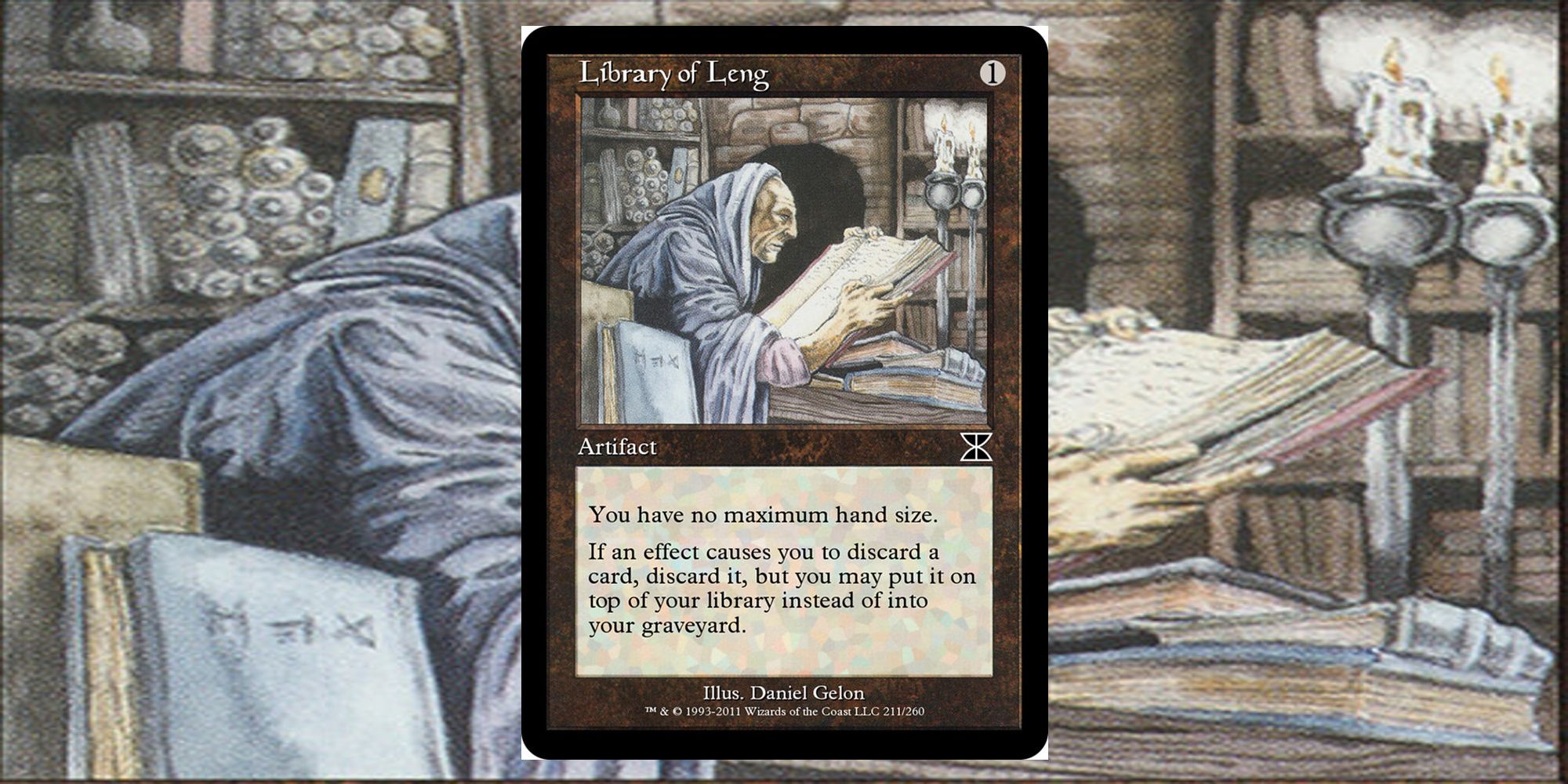 While opponents are too busy dealing with your big threats like your commander or Etali, Primal Storm, Library of Leng will sit pretty and rack up value. Nobody will waste a Disenchant on a one-mana artifact, and that’s the beauty of this card. It flies under the radar and allows you to discard with Faldorn or any discard spell, but put the card on top of your library instead. Its ability seems trivial, but it allows you to avoid those pesky discard spells opponents tend to play. 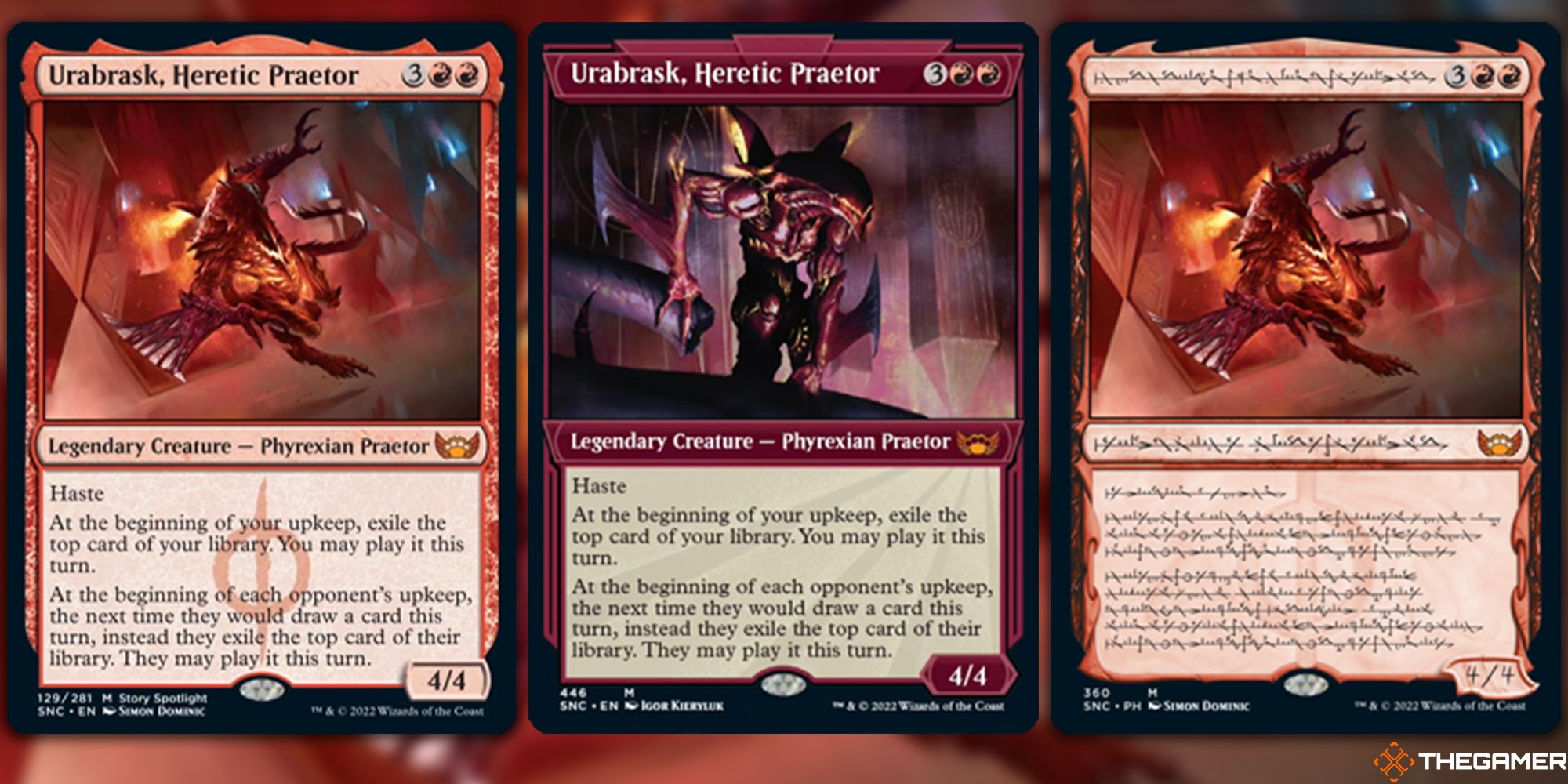 If you avoid the Phyrexian print version and foil versions of Urabrask, your wallet will thank you. However, the promo version of this card is under $5 and fits perfectly with Exit from Exile’s strategy. Every upkeep you get the opportunity to exile the top card of your library and play it this turn.

Your opponents might also earn the same privilege, but they aren’t running the same strategy as Exit from Exile, so it isn't a big problem. They also risk losing a card if they don’t play it that turn. 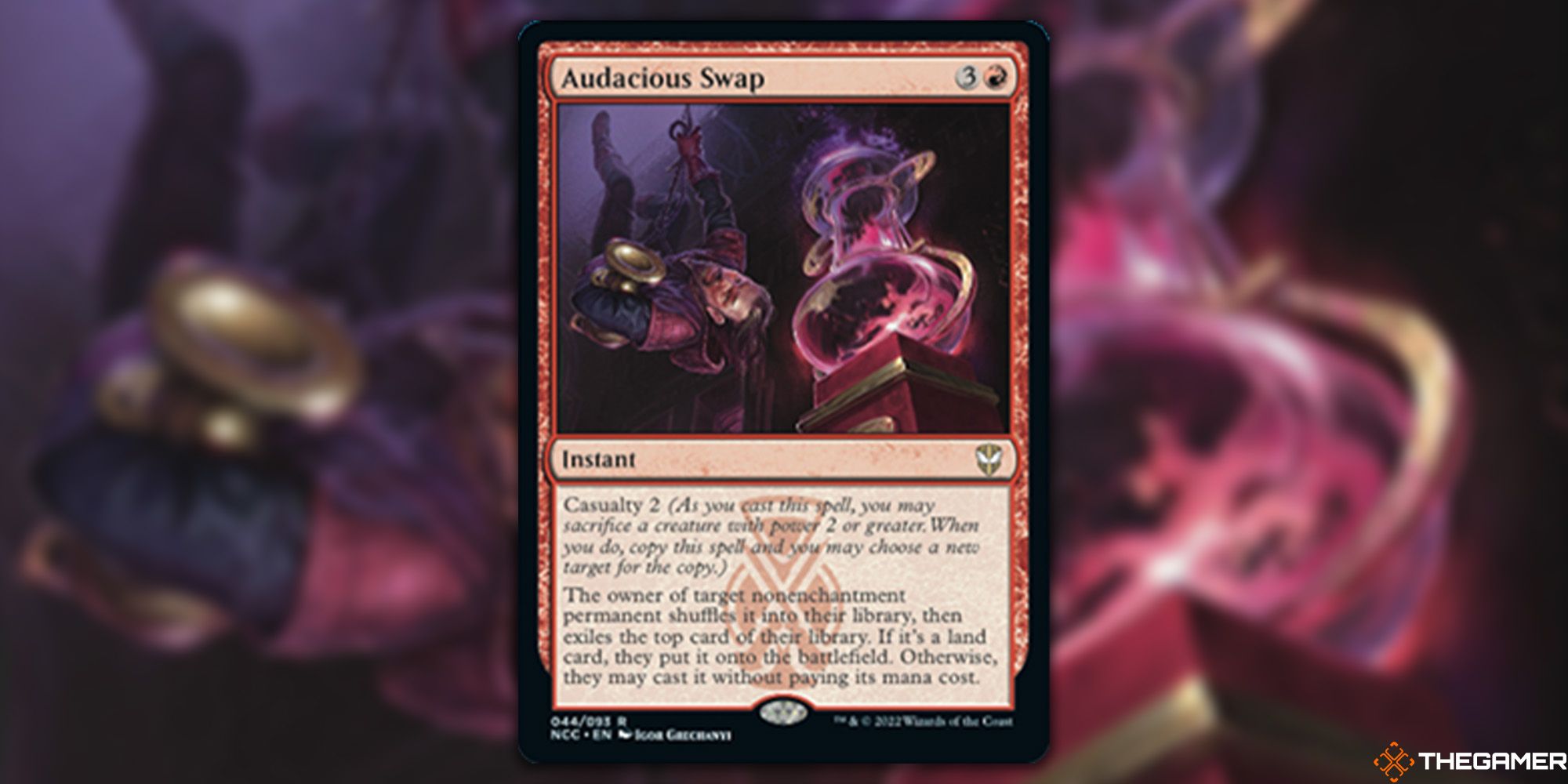 Audacious Swap might look like a removal spell at first glance, but it’s really a method for you to cheat out something better. Target a permanent that’s not an enchantment, shuffle it back into your library, and then exile the top card of your library. If it's a land, it goes onto the battlefield, or you can cast it without paying its mana cost – triggering Faldorn.

To top it off, it has casualty, which allows you to sacrifice a creature to copy Audacious Swap and do the same thing to another permanent that isn’t serving much of a purpose on the battlefield (and get a second Faldorn trigger for free). 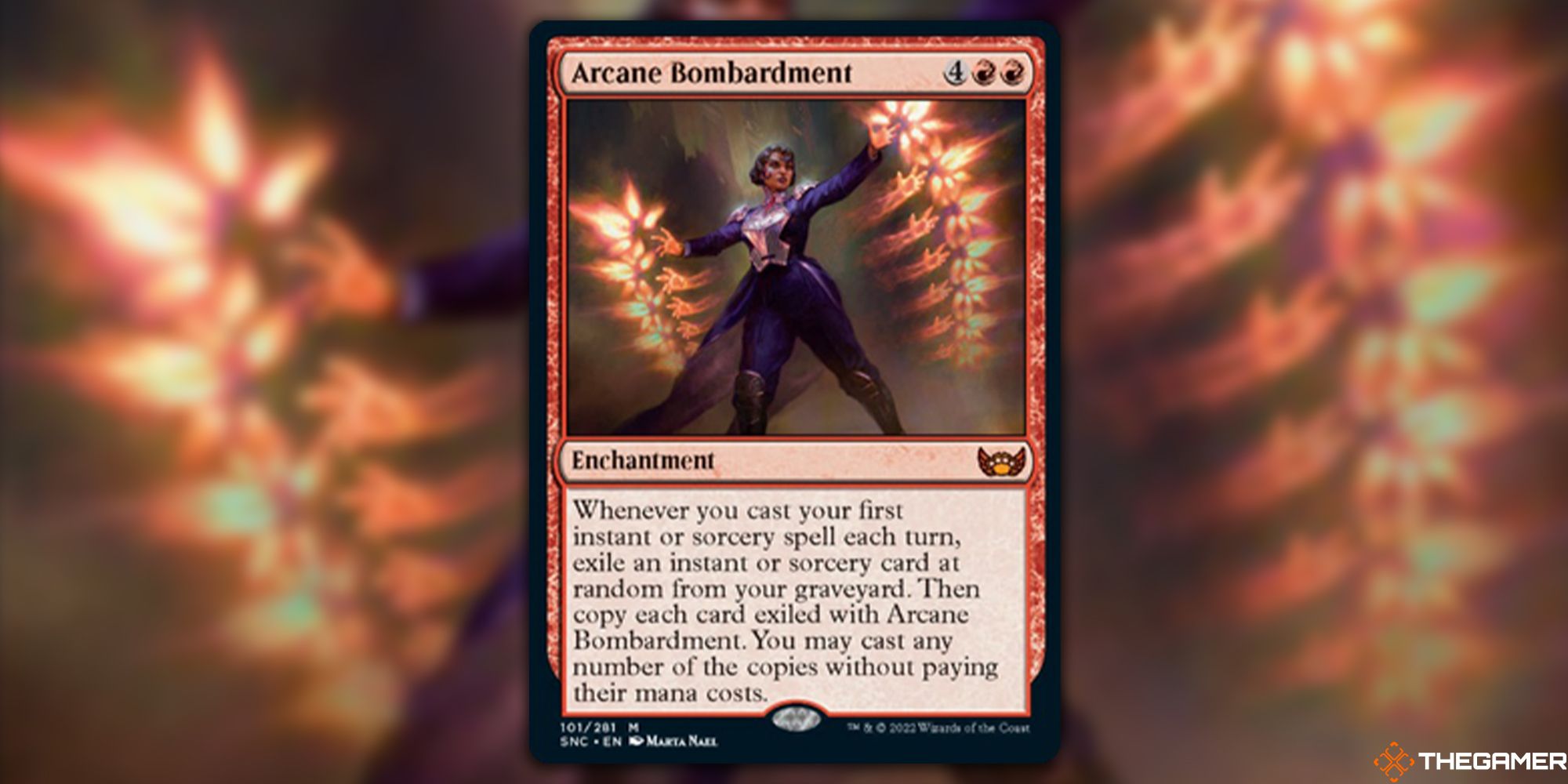 What's better than casting an exiled spell? Casting it for free. Exiling an instant or sorcery and then casting every spell exiled with Arcane Bombardment makes it incredible with Faldorn.

Exit from Exile is only equipped with 15 sorceries and five instants, so a few more spells may be required to make this card really pop. That’s easy enough, though, since there are plenty of cards that don’t focus on the primary strategy of the deck that can be replaced.

However, even the spells it comes with make Arcane Bombardment, one of the breakout red cards from Streets of New Capenna, a threat that will have your opponents sweating. Imagine the chaos that will ensue when you have even five spells exiled with Arcane Bombardment and are casting all of them every turn. 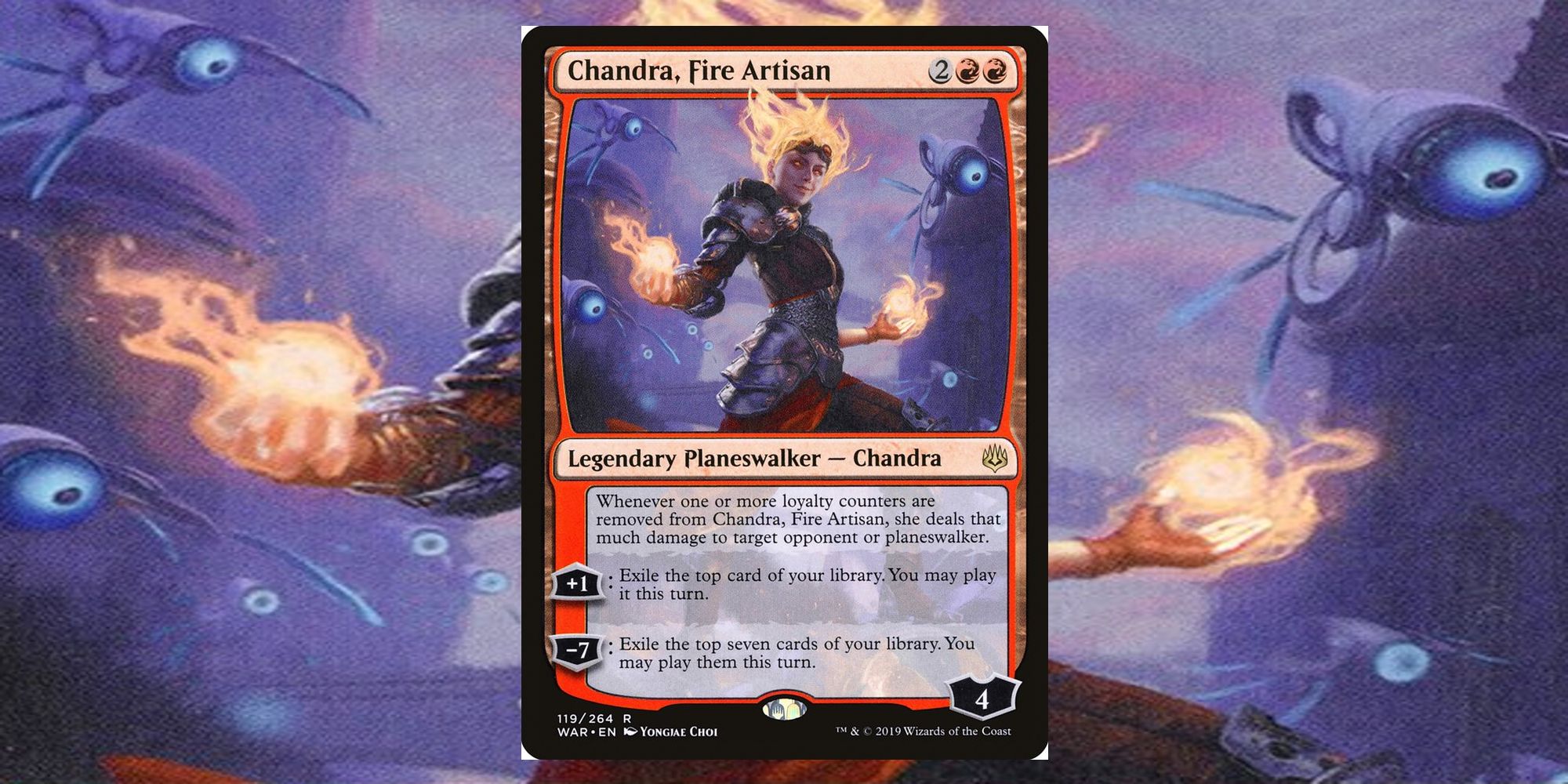 Planeswalkers are a big threat in any format, and when you have one that synergizes with your commander, they’re even worse. Chandra, Fire Artisan gives a consistent method to play spells from exile every turn, and if you have Faldorn in play, that’s a new Wolf token every turn. Chandra’s ultimate also works with the commander.

Don’t worry about your opponents attacking Chandra. She has a static ability that returns that damage to them or a planeswalker of your choosing. So, if they hit her for six damage, she deals six damage to an opponent or planeswalker. 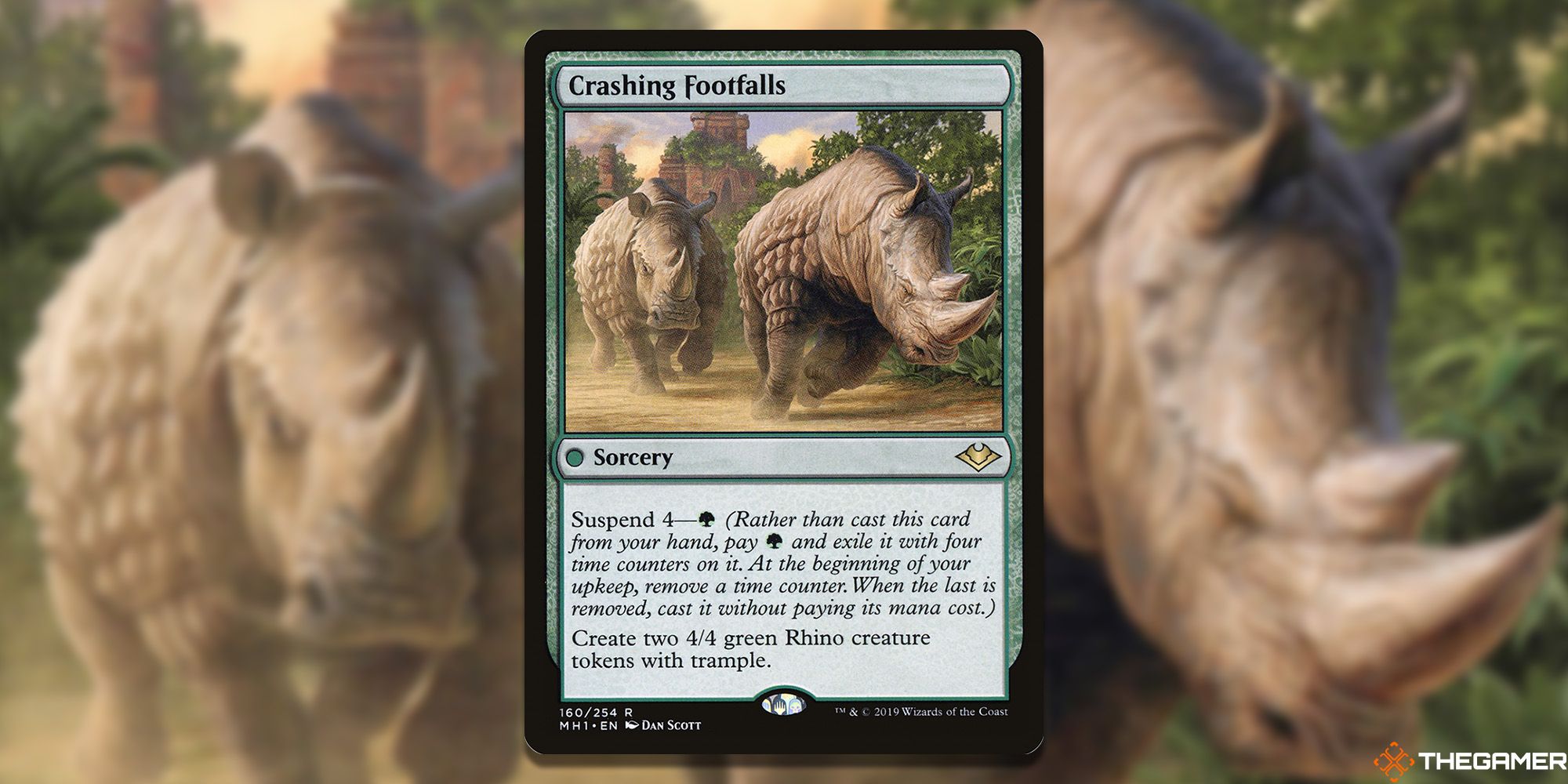 Suspend was first introduced in the Time Spiral block, and makes a reappearance from time to time. It’s one of the best mechanics for this deck, since the suspended spell is cast from exile when it runs out of time counters.

For the low cost of one green mana, you get two 4/4 Rhino creatures with trample. The only downside is waiting four turns for those creatures to hit the battlefield. For the combined power and toughness of eight, though, it’s worth the wait, and Crashing Footfalls is a no-brainer for Exit From Exile. 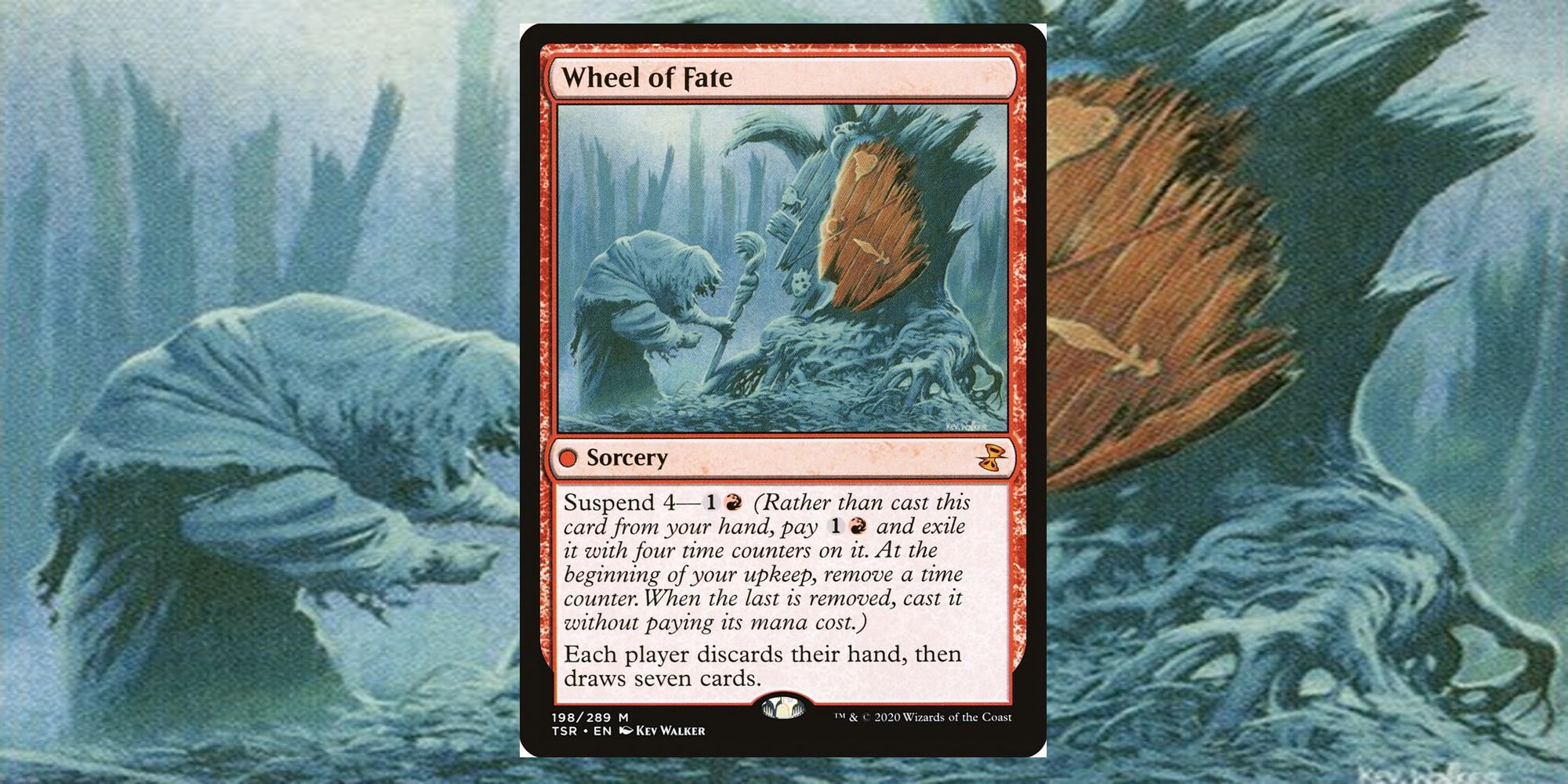 Wheel effects (discarding your hand and drawing new cards) have their strengths and weaknesses for all parties involved. It gives you an opportunity to draw seven fresh cards, but it also has the ability to either disrupt or improve your opponent’s hand, especially if they had less than seven cards and desperately need an answer.

Luckily, if you have Library of Leng in play, any cards you don’t want in the graveyard you can put right back on top of your library instead to redraw them. Meanwhile, your opponent might be worse off, and you very likely interfered with their plans. Best of all, Wheel of Fate nets you an extra Wolf with Faldorn in play thanks to its suspend ability. 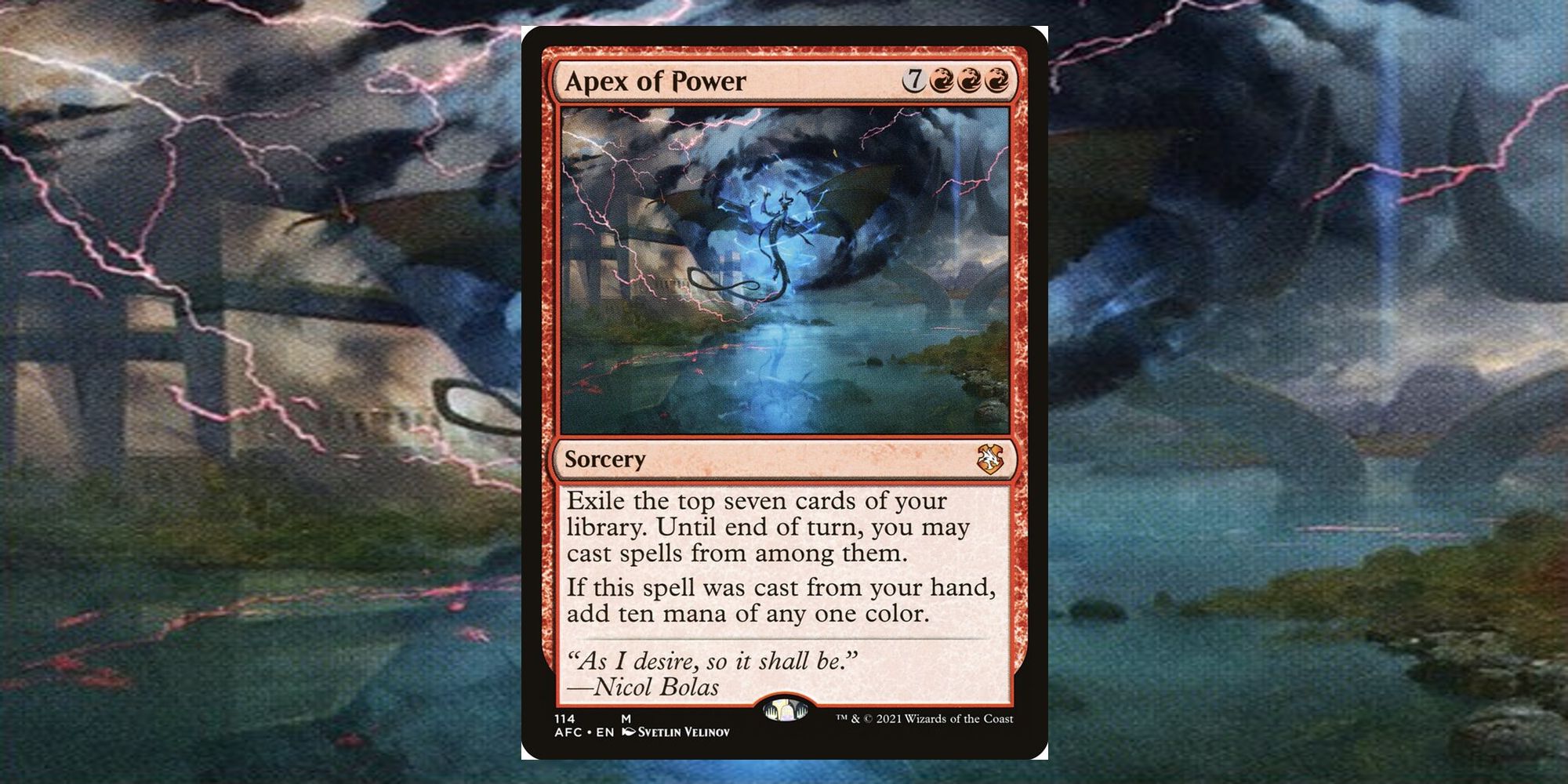 Ten mana is a hefty price to pay, even in a game of Commander. If you’re spending that much on a single spell, there better be a payoff worth investing in, and Apex of Power has that. Spend three red mana and seven generic mana and you essentially draw an additional seven cards.

And that ten mana you spent? As long as you cast Apex of Power from your hand, you get to add ten mana of any one color to your mana pool – effectively making it free, and giving you the resources to play the seven cards that end up in exile. 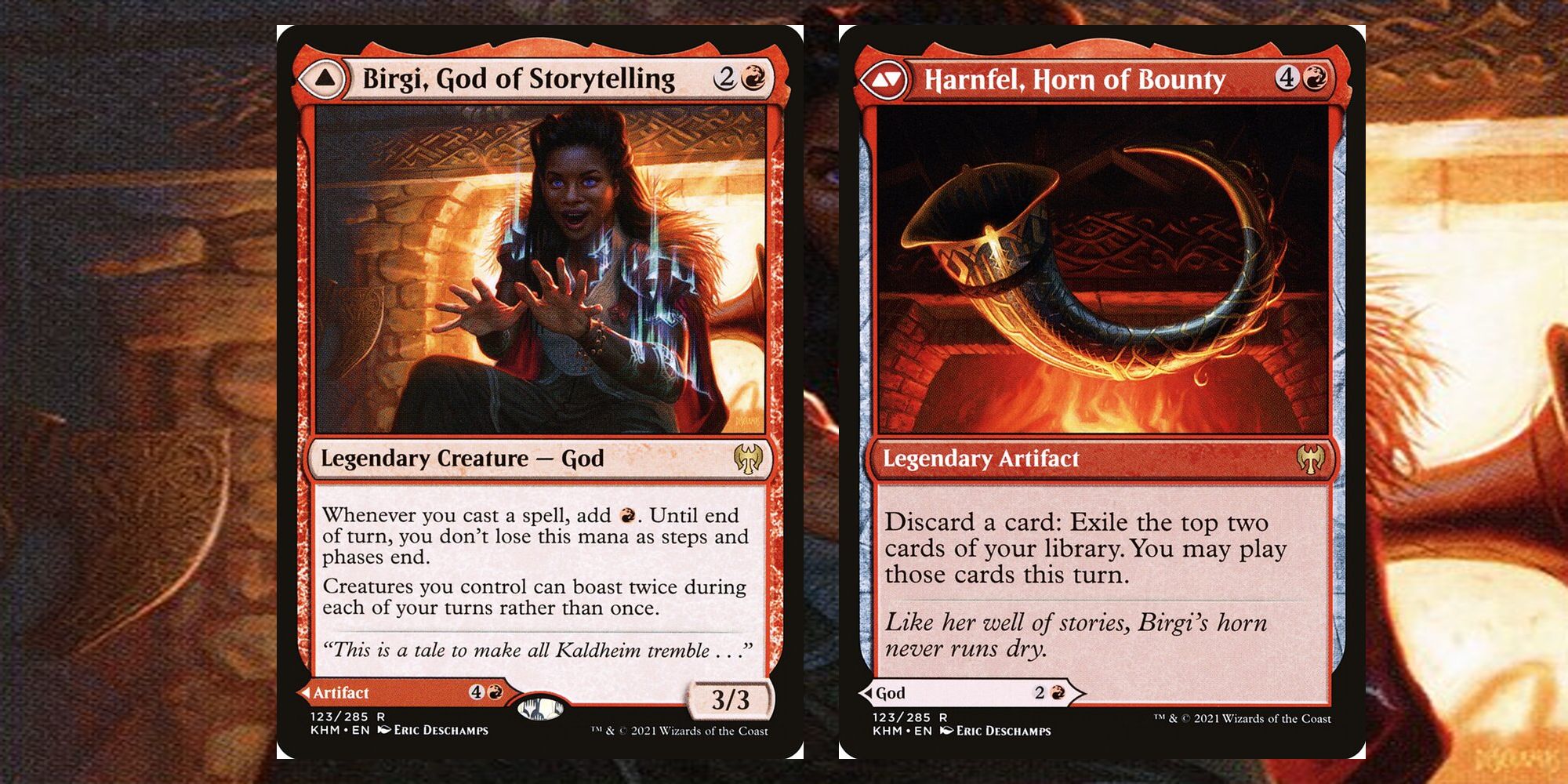 Birgi, God of Storytelling is a good card and might be useful in this deck from time to time. Nine times out of ten, though, you’re going to cast Harnfel, Horn of Bounty, and reap the rewards of said bounty. The bounty being 2/2 wolves generated by your commander.

Birgi is also a valid choice since she gives you mana after casting a spell and it doesn’t dissipate when moving to a new phase. However, her second ability is useless unless you add some boast creatures. 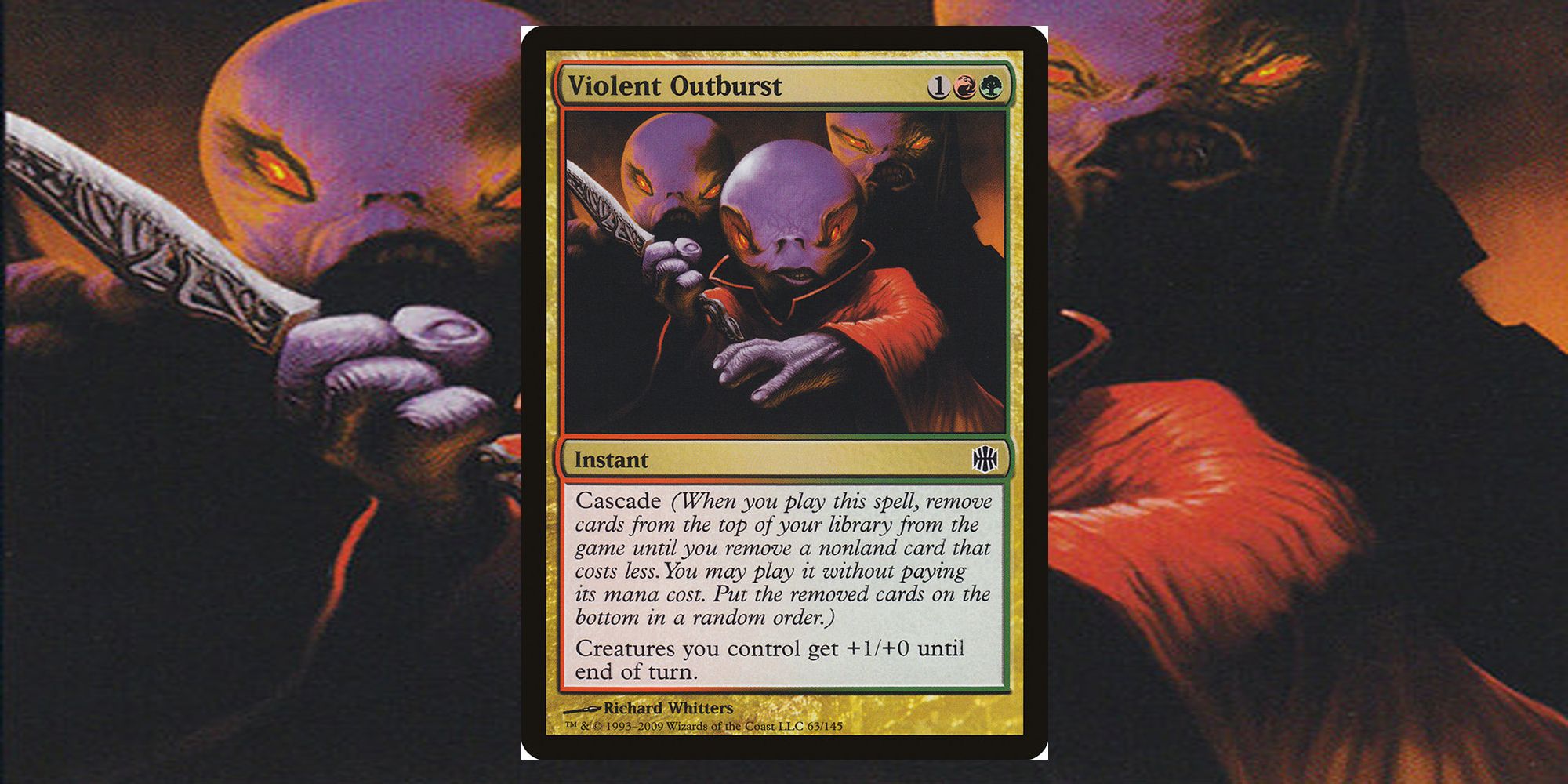 Cascade is an outstanding mechanic on its own, as it lets you play another card from the top of your library for free. Pair it with Faldorn, Dread Wolf Herald and it gives a nice synergy that will tempt you to run every cascade card that you can in the hopes that you'll hit this and keep the chain going.

Violent Outburst is a nice addition to this deck because you will eventually want to attack with all the Wolves you created from Faldorn’s ability, and Violent Outburst gives them all +1/+0.

There are plenty of cards Violent Outburst can play with cascade, too. From Dire Fleet Daredevil to the Passionate Archaeologist Background (one of the new Backgrounds), there is no shortage of spells that cost less than three mana Violent Outburst could hit.