Relics might be the hardest main quests in Outriders, not because of enemy encounters, but because of the final boss. After a few straightforward encounters with Kang’s Fighters, you’ll be faced against an enemy that can easily one or two-shot your character.

Before you venture into the ruins, upgrade your gear! You can’t leave once the boss fight begins. Bring a mid-range weapon that either has passive damage over time (such as the Death Chains mod) or healing properties. Consider speccing for Resistance through armor mods or your passive tree, as this boss outputs an obscene amount of Anomaly damage.

Set Up A Reciever 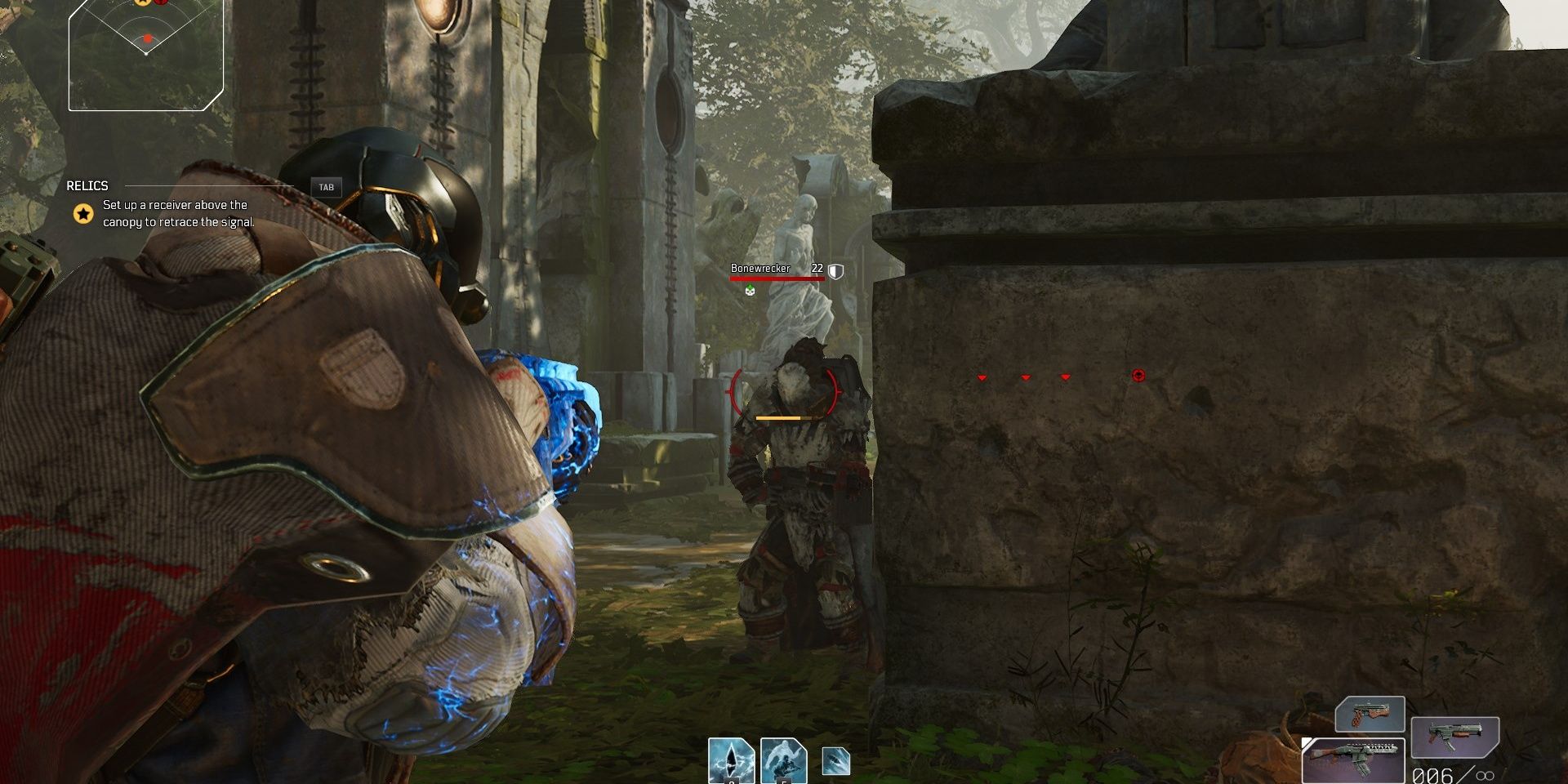 Right past a massive tree is a group of Kang’s Fighters guarding the ruins. Most of these enemies are melee units, so either keep your distance or stay aggressive. An enemy near the back, named “Simo White,” is effectively a Vanguard Captain. Focus on killing him, then clear out the rest of the enemies. 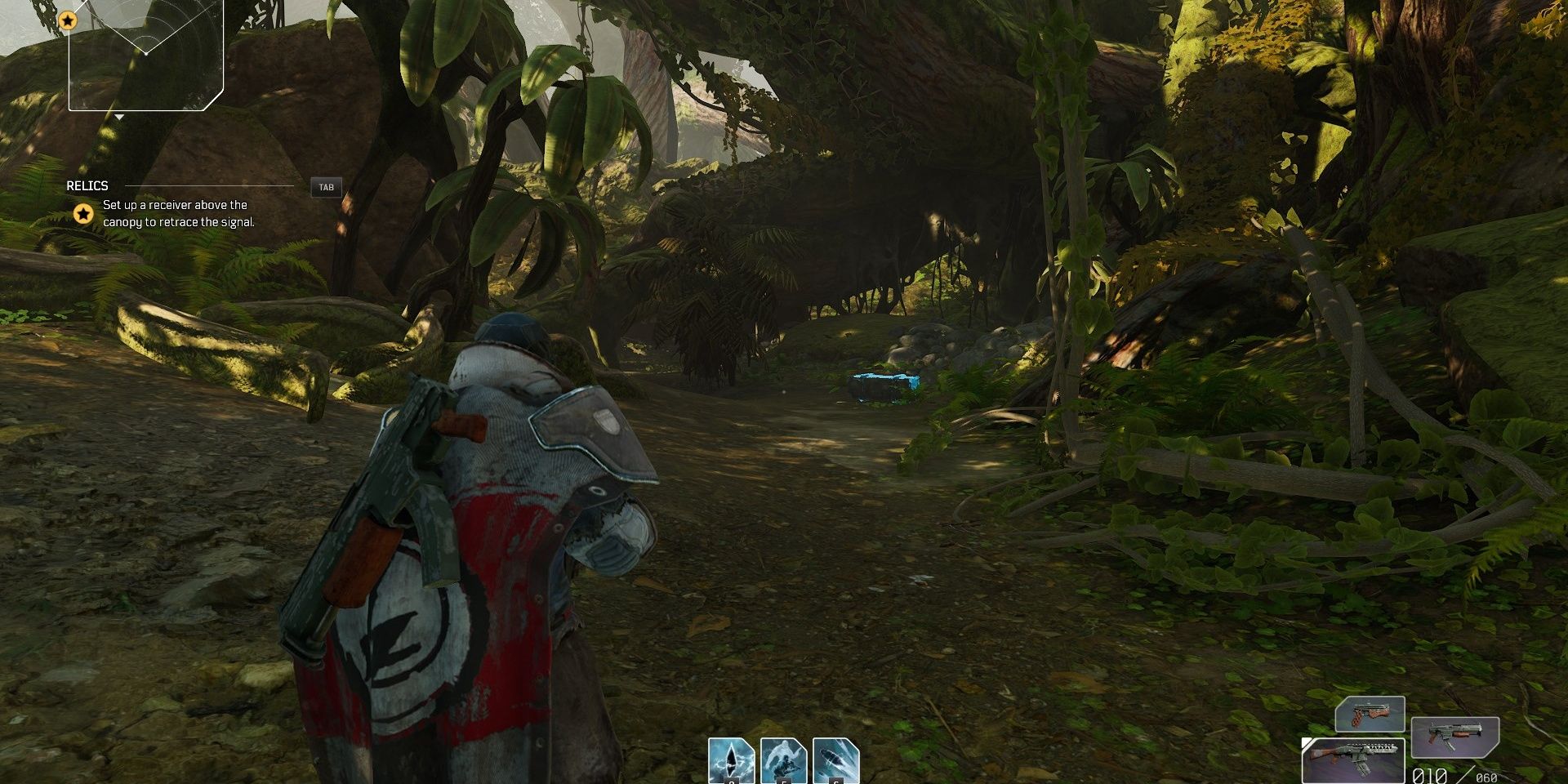 There’s a dirt path on the left part of the arena, just before you fight the Simo White Captain. Follow the path to find a chest. 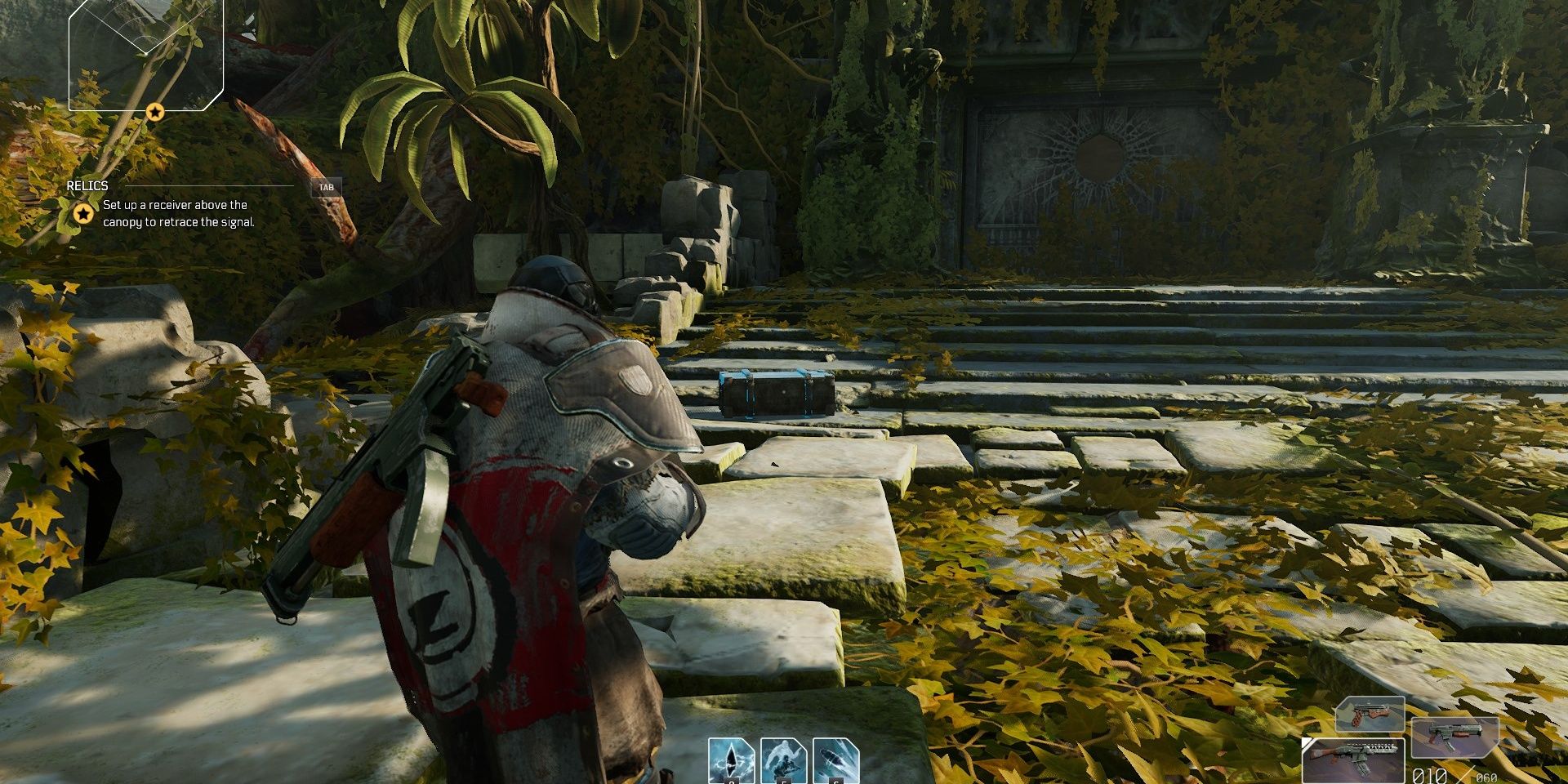 Continue to follow the dirt path from the first hidden chest. 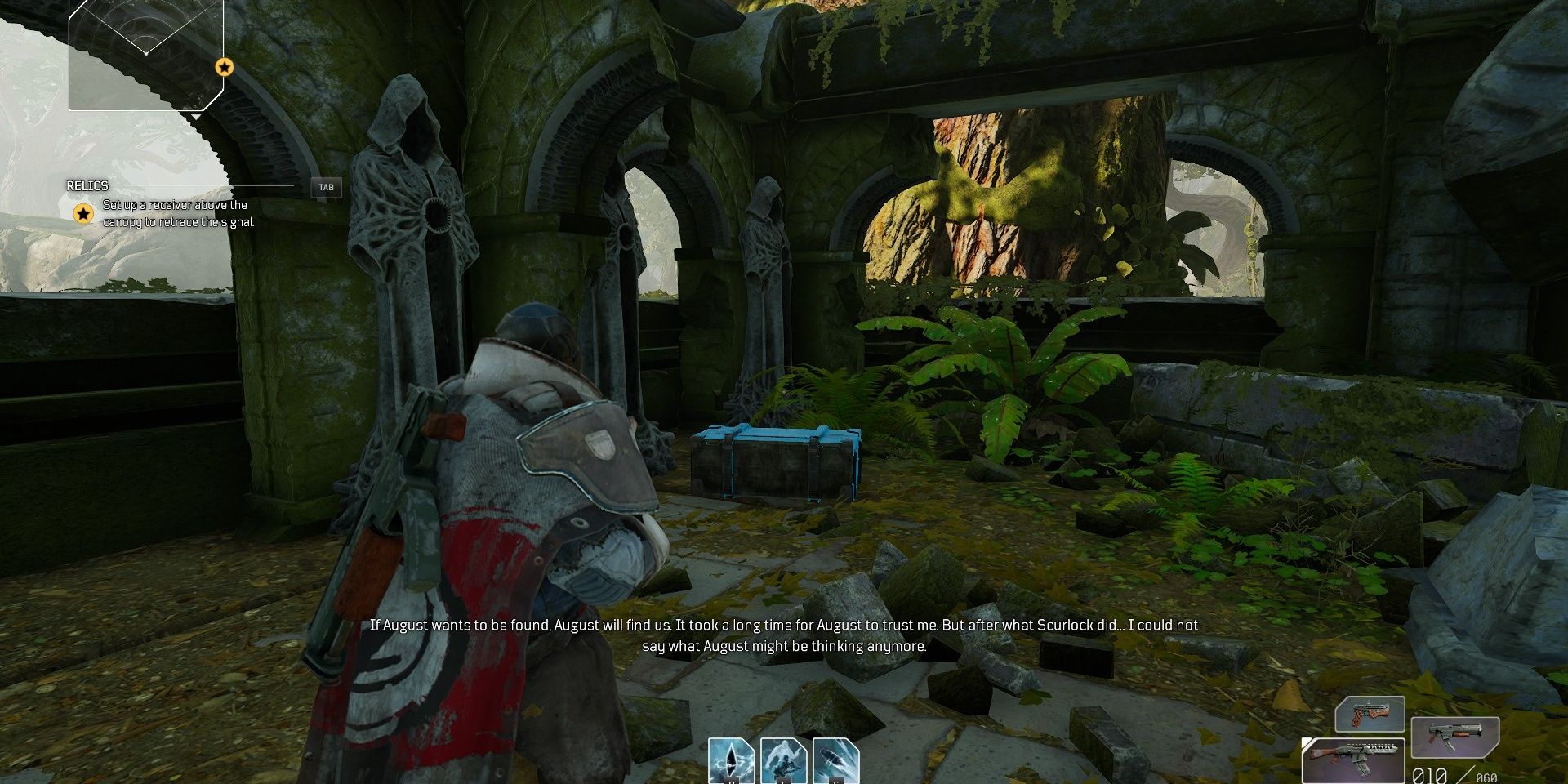 You’ll find this tucked away in a corner directly across from the exit. Turn directly around from the rubble pile to find it. 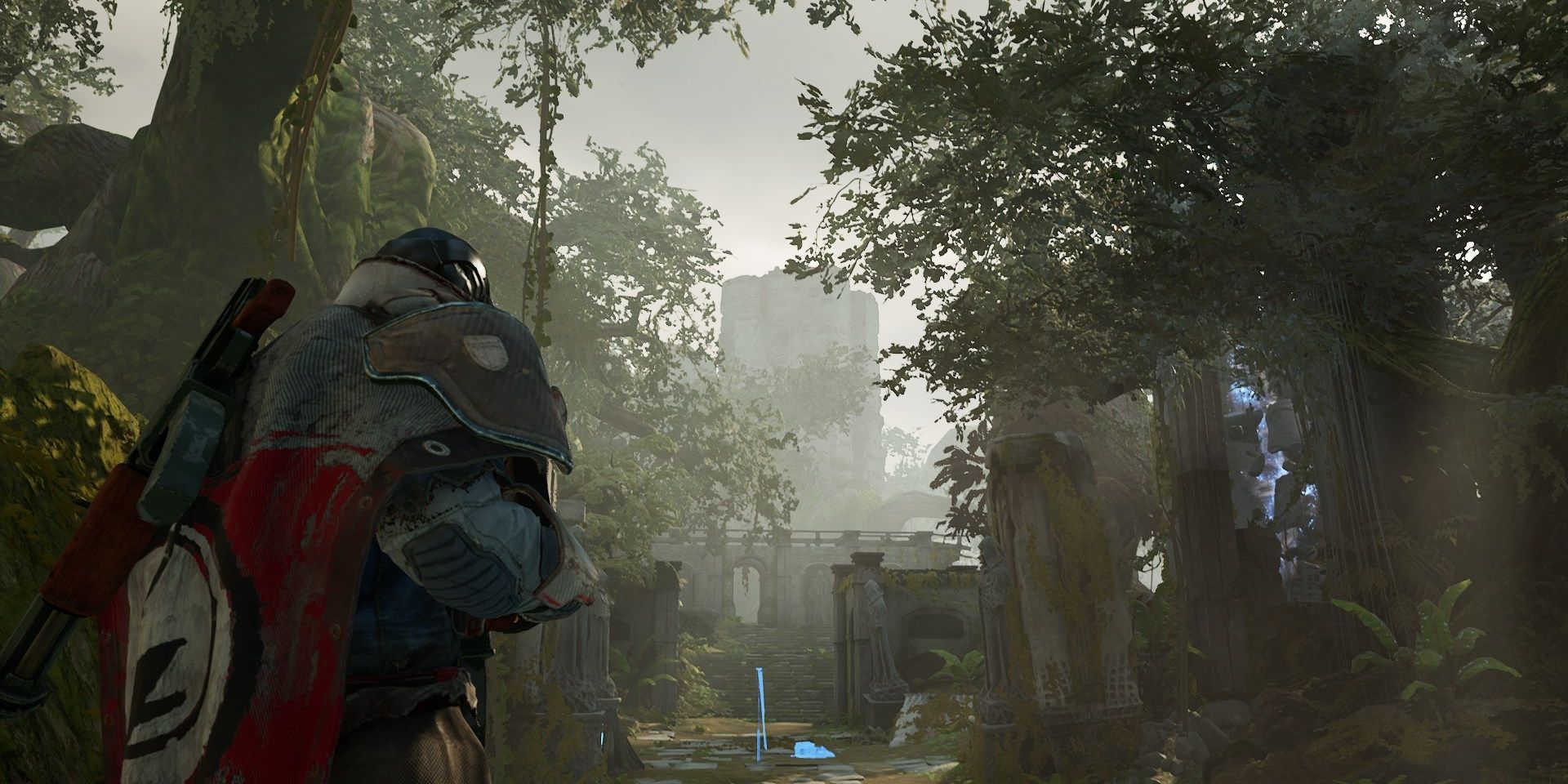 Destroy the rubble guarding the path to find a hologram you can place a flag at. 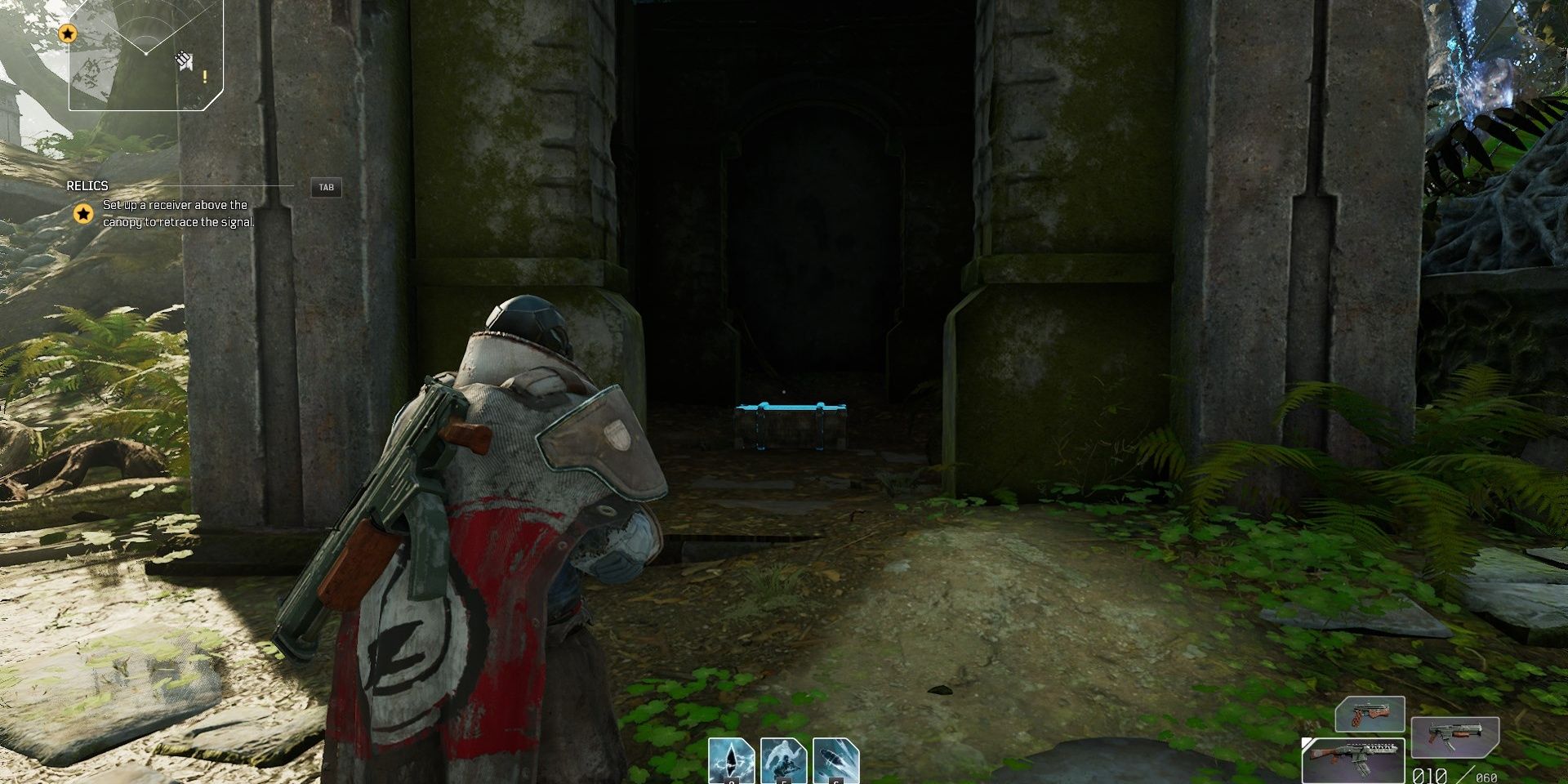 Grab the chest to the right of the flag before you continue. 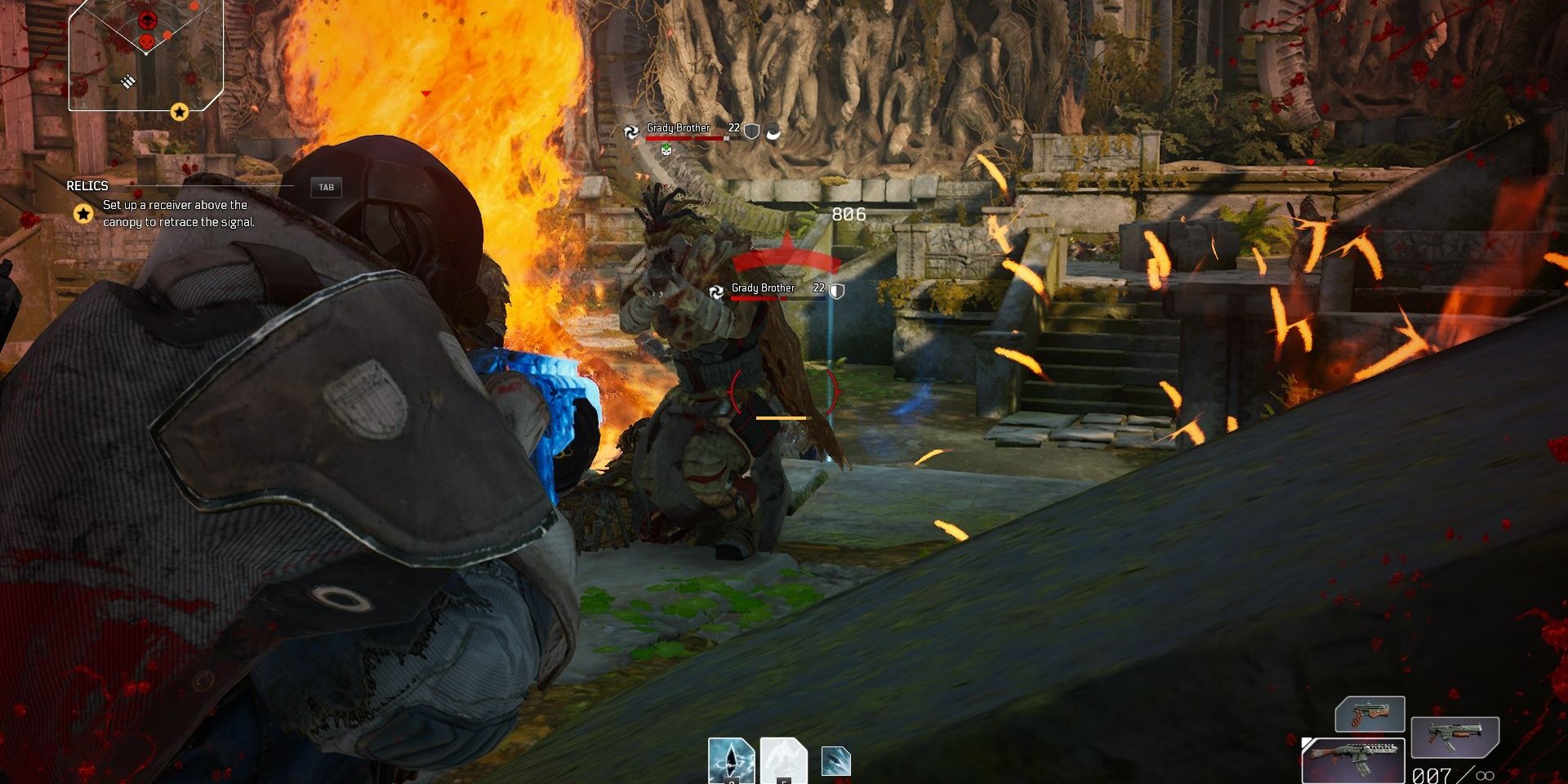 You’ll find more of Kang’s Fighters on the outskirts of the ruins. Unique to this encounter are two Elites named the “Grady Brothers.” They’re reskinned Vanguard Captains, one using ice while the other casts fire skills.

These Gady Brothers should be dealt with as soon as possible, especially the ice brother. If one of the brothers freezes you, the other can summon a flaming pillar that can easily kill you. Besides that, this is a trivial encounter. 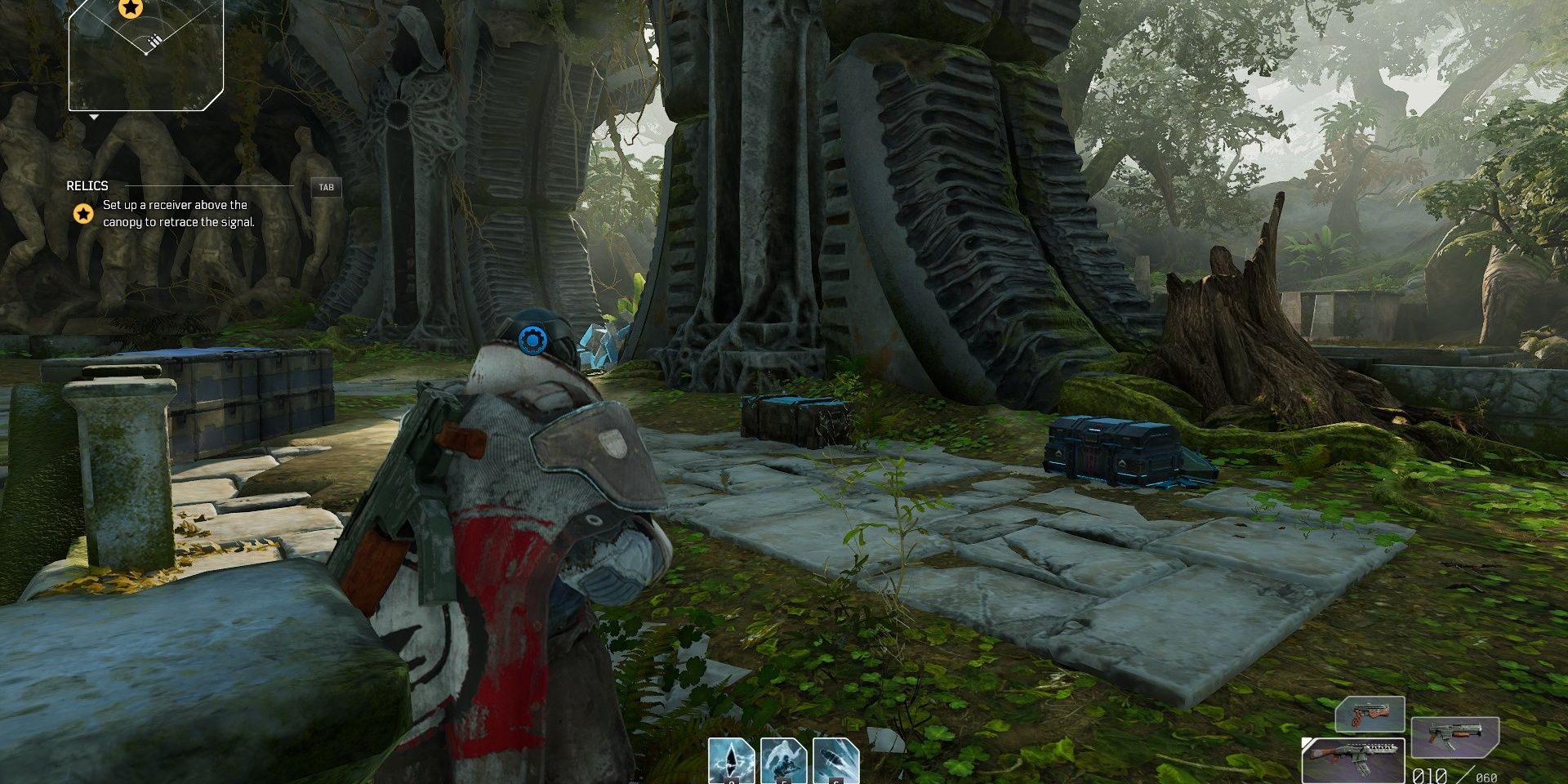 Found beside an ammo restock station near the exit. This is near impossible to miss. 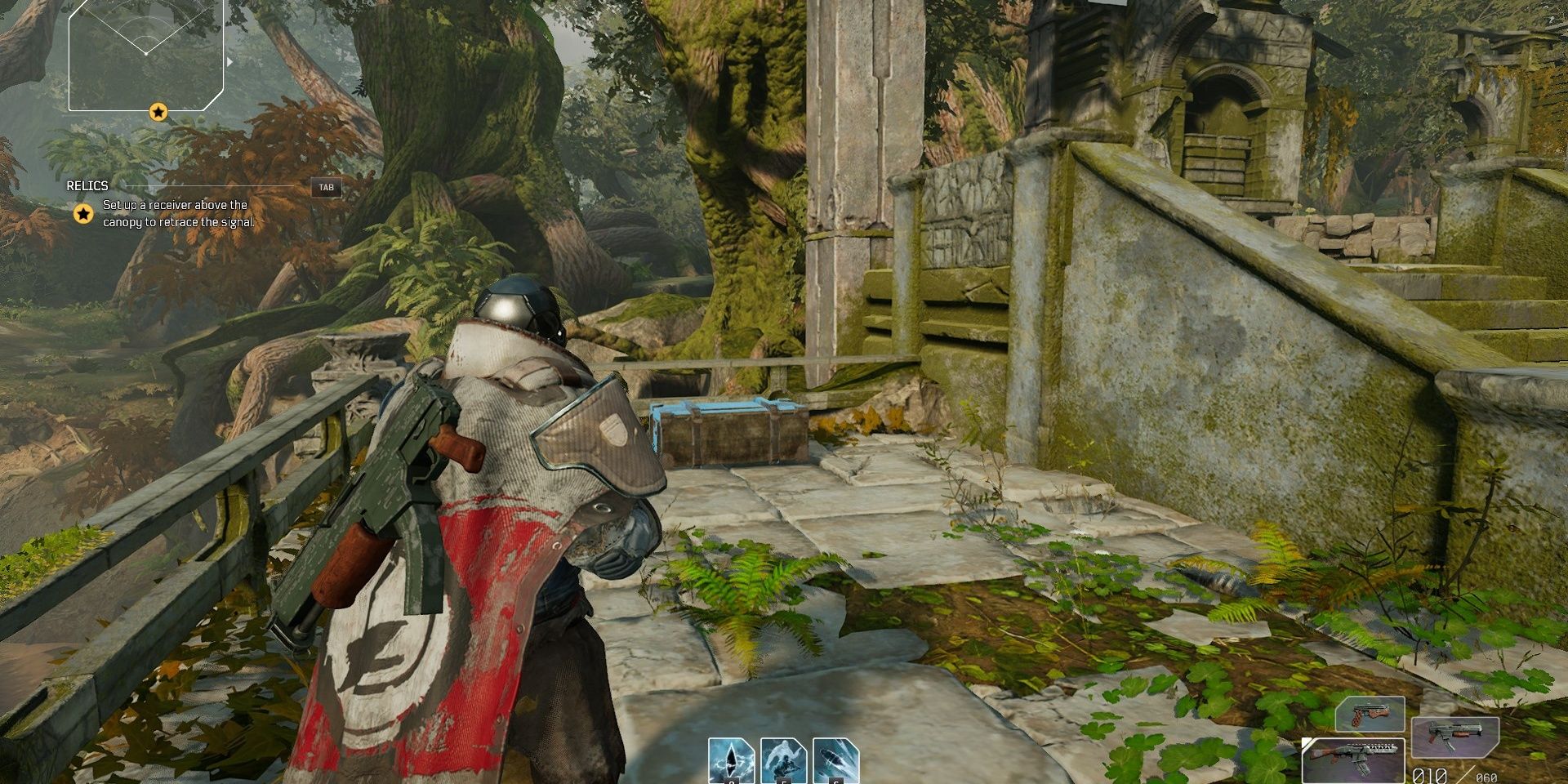 Look to your right from the first chest, then run straight ahead to grab the second chest. 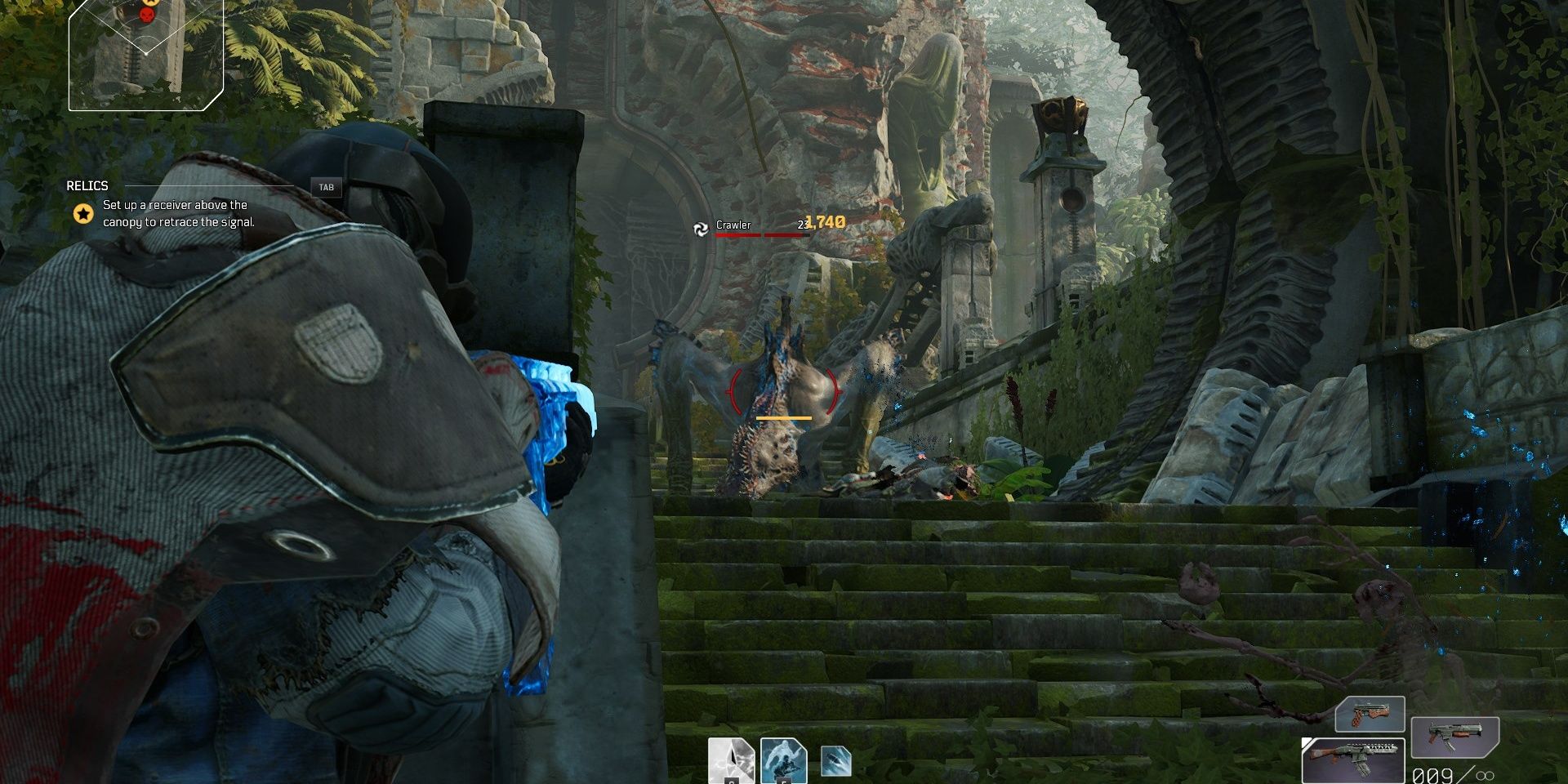 After a short run, you should now be at the stairs to this massive tower. Perforos are guarding the entrance, one of which is an Alpha. Remember to use your melee to absorb any incoming slam attack. A Crawler will also be at the back, using ranged attacks to freeze you. Once you’ve dealt with the Alpha, focus on the Crawler. 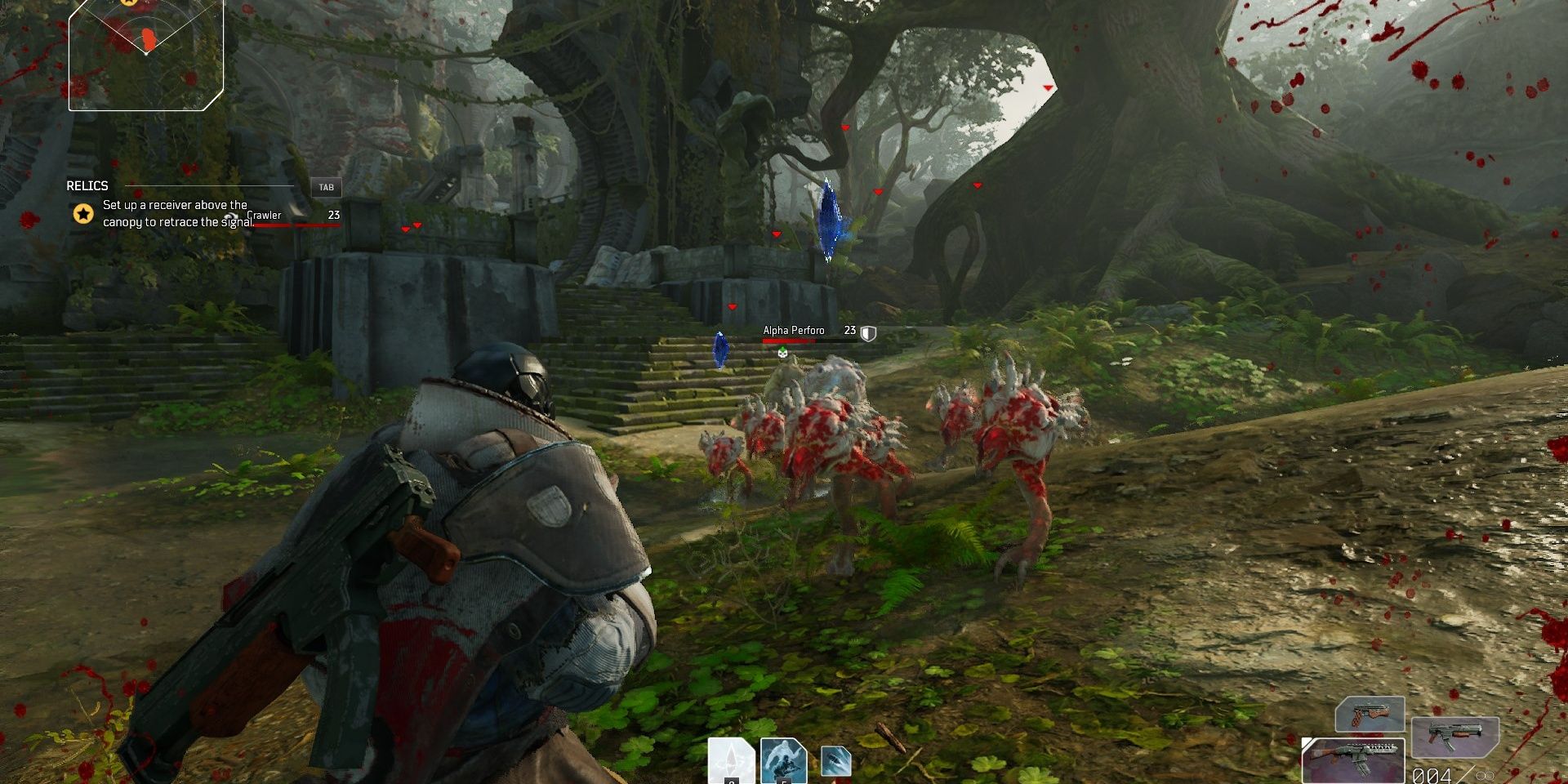 You can also lure the enemies past the stairs if you want to avoid the Crawler altogether. Either way, kill all of the enemies to clear a path to the tower. Prepare for a boss fight. 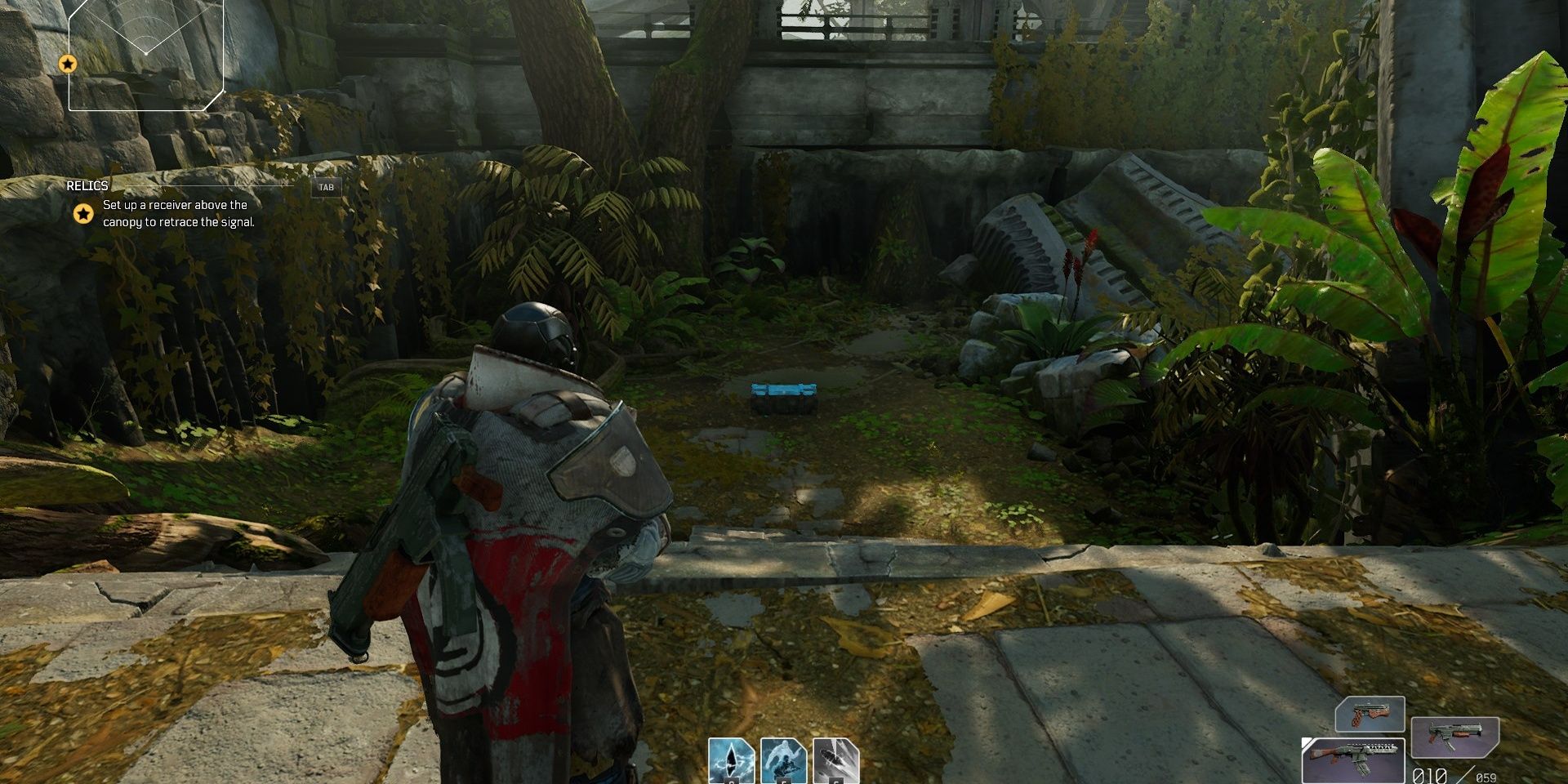 Near the gate that leads to the tower’s apex, head left instead. Follow the path down a flight of stairs to find this hidden chest. 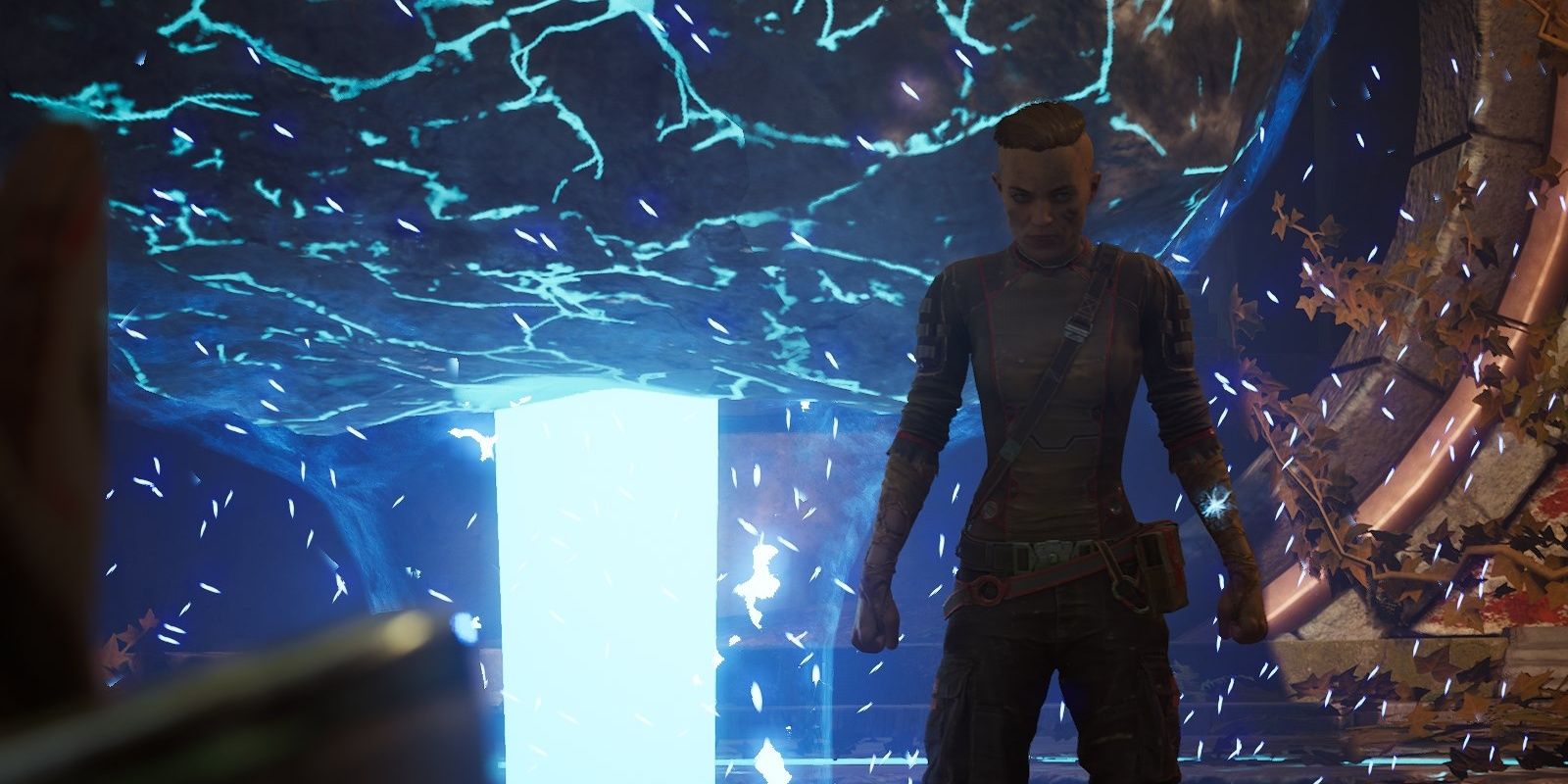 Altered Bailey is the hardest, most unfair boss in all of Outriders. She’s harder than the final boss of the campaign. If you can’t kill this boss after a few attempts, lower your World Tier. She doesn’t seem balanced for World Tiers 5+.

Bailey is both a caster and a ranged unit, utilizing her rifle and various abilities to damage you. Here’s what Bailey can cast:

Every ability deals heavy Anomaly damage, one-shotting most characters at higher World Tiers. Unless you have a high Resistance rating, you want to avoid every attack she throws out. 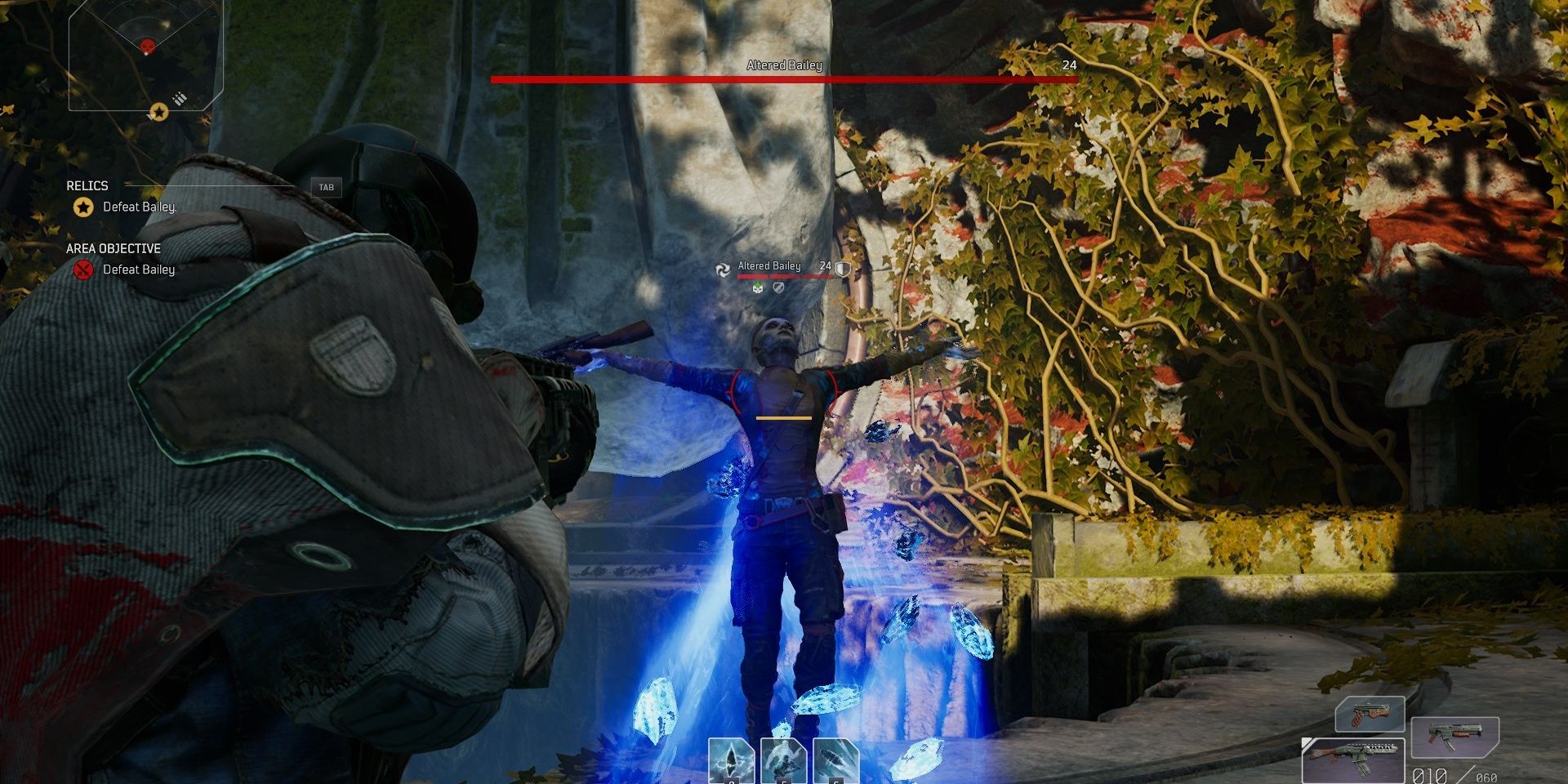 When the fight begins, Bailey will hover in the air for a few seconds to gather her strength. Damage her immediately. This is your only safe window to damage her. When she stops levitating, immediately run to the pillars behind you. 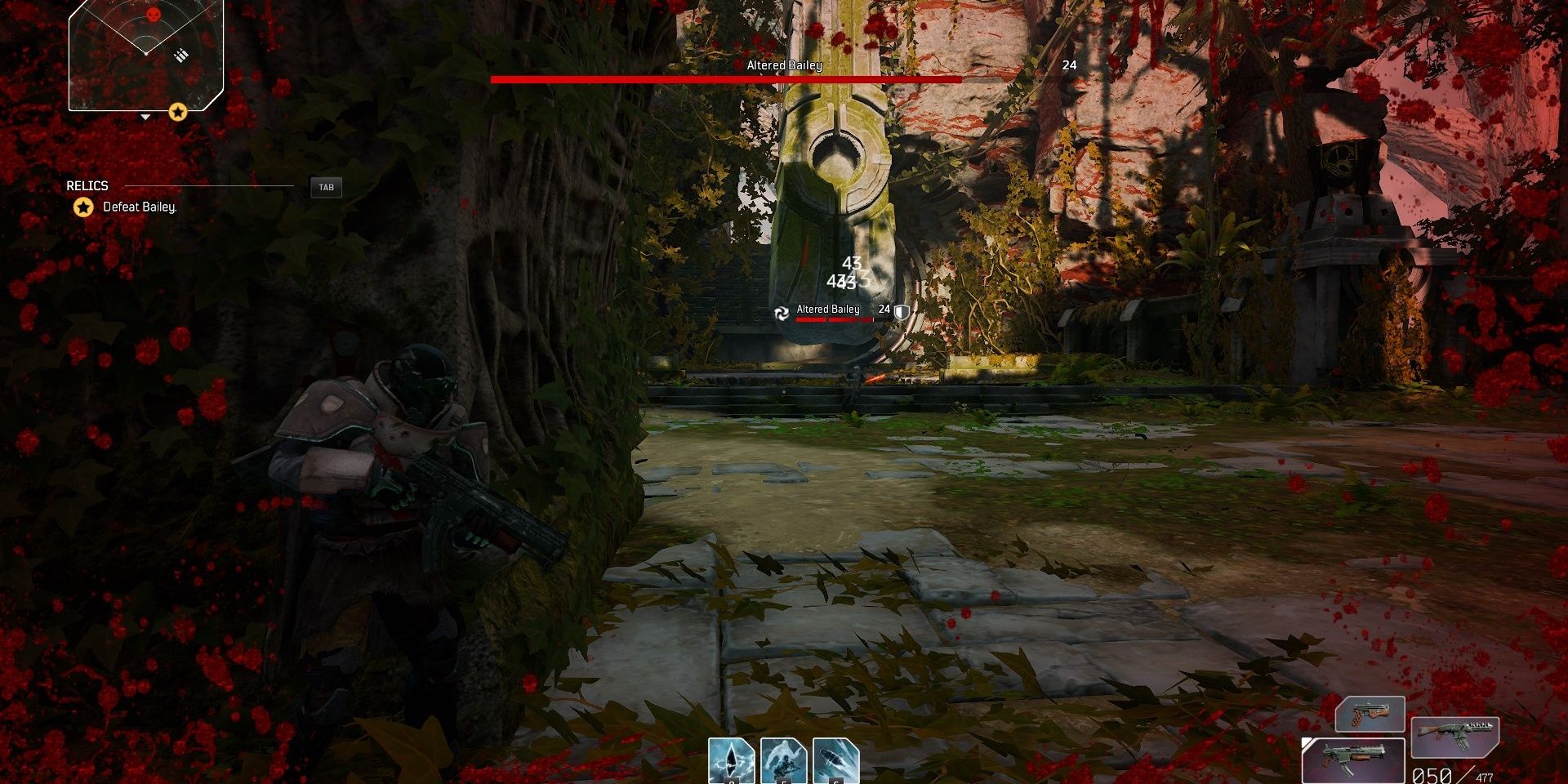 Bailey will slowly move towards you, throwing an ability every now and then. Try to get a few shots in from cover, doing your best to not expose yourself. 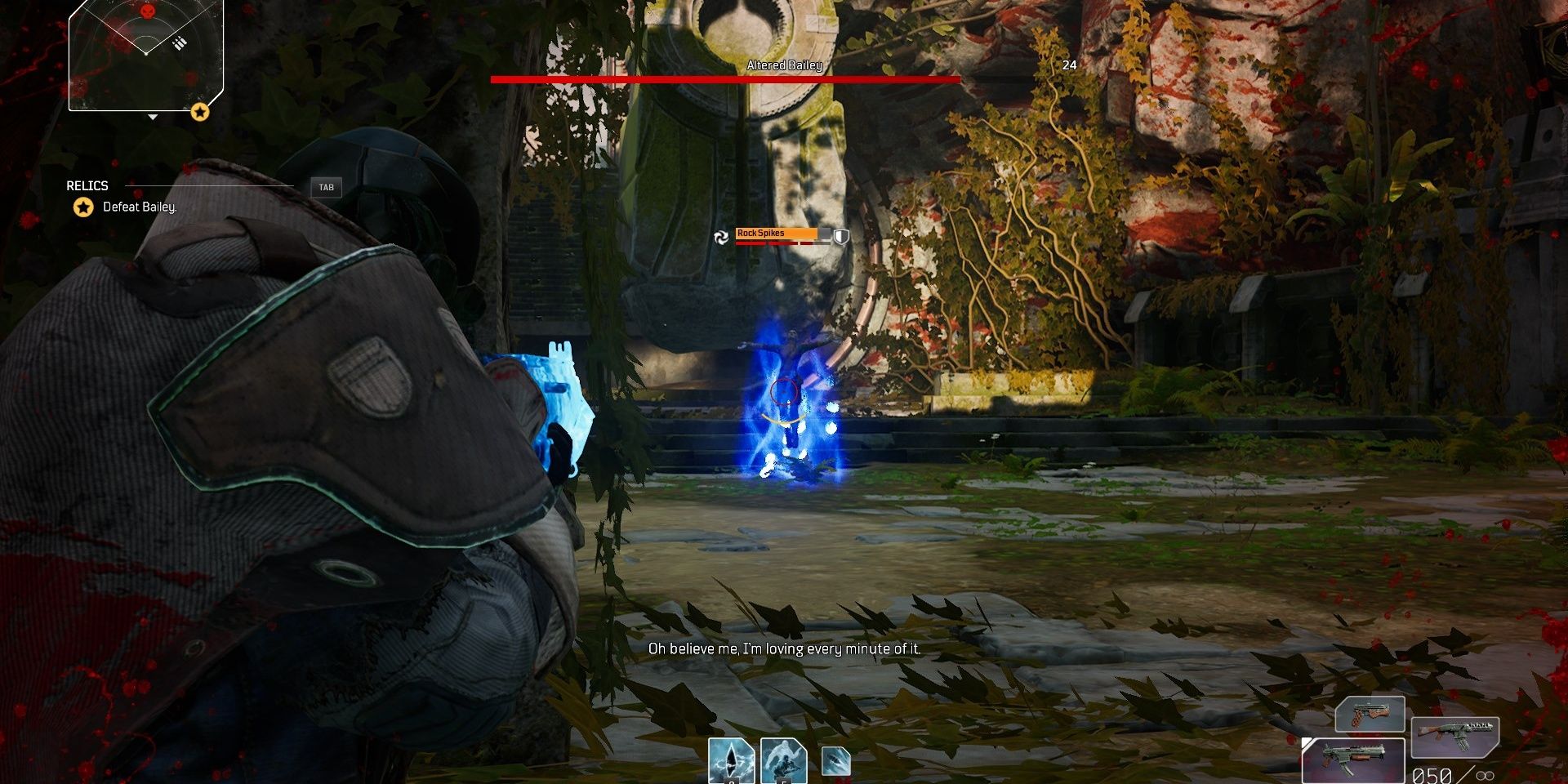 You’ll want to wait for Bailey to channel an ability with a long cast time, such as Rock Spikes or Stone Shards. When she starts levitating, you have a small window to attack. Damage her until she stops casting. You can extend this damage window slightly by using an Interrupt ability right as she stops casting, causing her to stagger for a second.

Immediately retreat when she’s done casting, as she’ll throw out a Ground Shock instantly. You can’t dodge it solely off of the telegraph; you have to dodge the second she stops levitating or you’ll get hit. 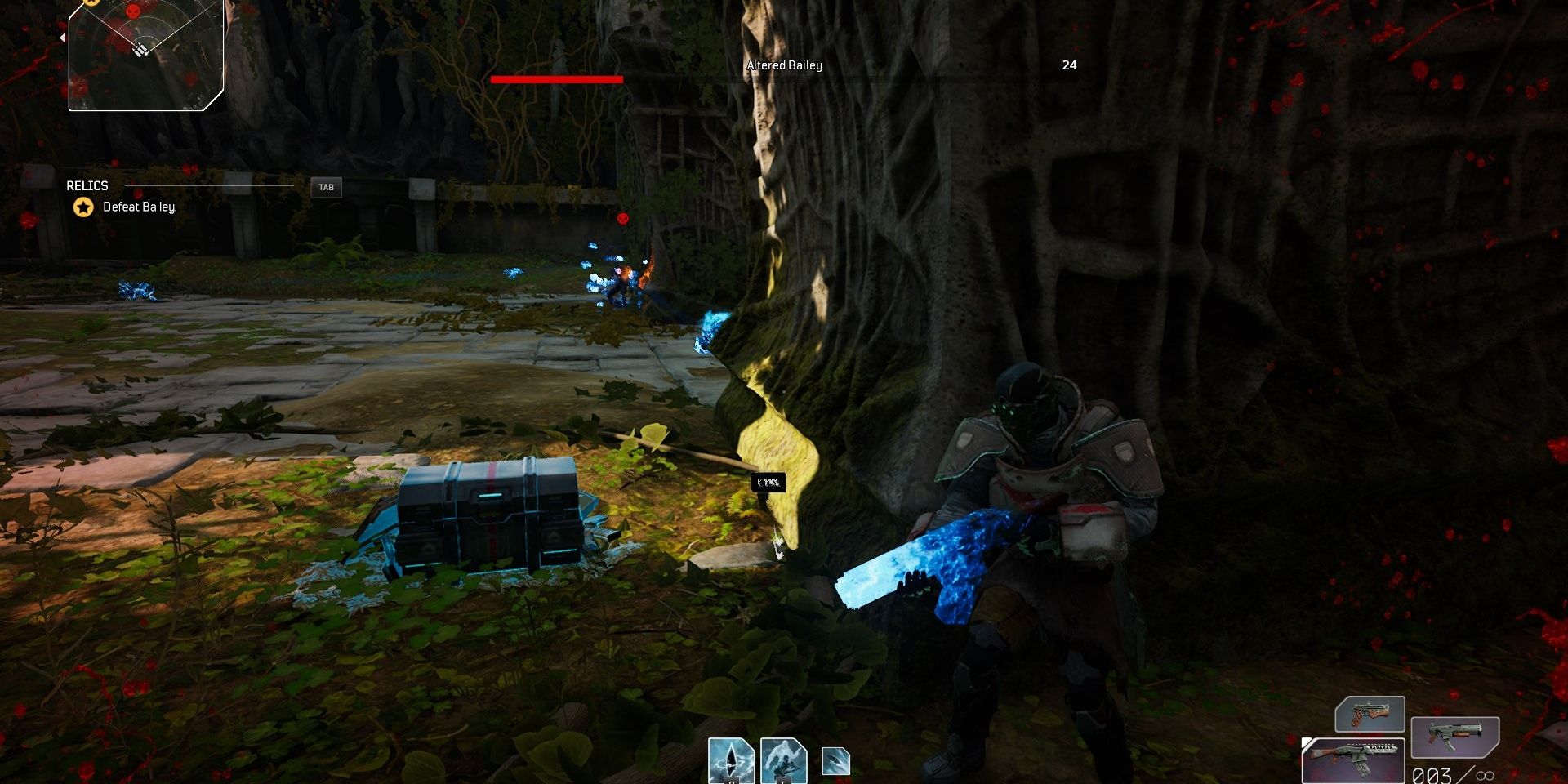 You’ll want to repeat this process until she’s dead, baiting long-cast animations by sticking to cover. A weapon that can deal passive damage, using the likes of Death Chains, is great for moments where you’re waiting for Bailey to act.

A few general tips about this fight:

Once you’ve defeated Bailey, return to Jakub outside the tower to continue your journey.