Paddington 2 has lost its 100% rating on Rotten Tomatoes after the publication of one negative review.

The review was posted on May 28 by Eddie Harrison, who claims to have previously slated the film on BBC Radio after it initially released. In the review, Harrison claims, “this Paddington has evil, beady eyes and ratty fur; the charm is entirely missing from the two Paddington films”. 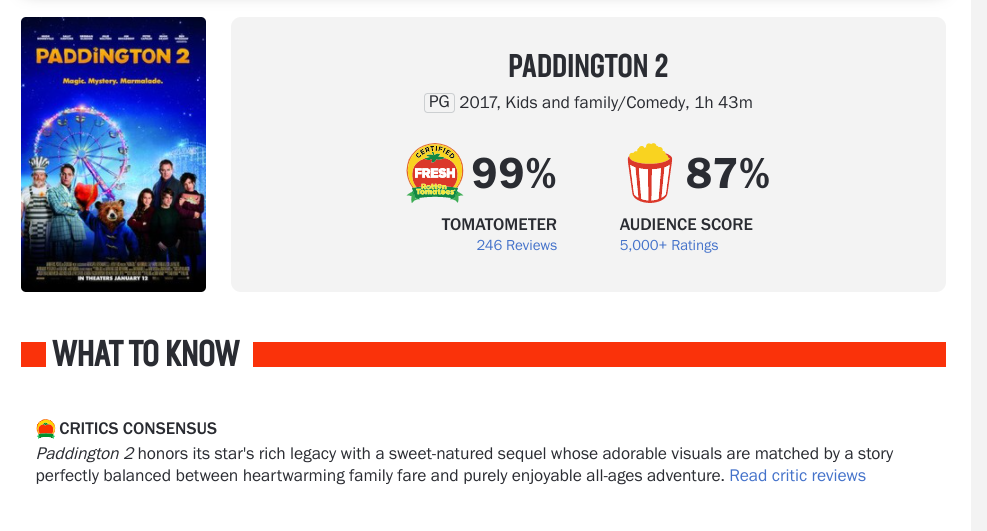 Harrison’s review of the film focuses on comparing the new Paddington to the old, and saying that the events of the second film are too unrealistic and bombastic for Paddington. He also says that “considerations of race and identity, key to the Paddington character, are not addressed”.  Harrison also slams this iteration of Paddington, calling him “over-confident, snide and sullen”.

It seems that Harrison is aware of the film’s revered position as he says in his review, “I reviewed Paddington 2 negatively for BBC radio on release in 2017, and on multiple occasions after that, and I stand by every word of my criticism”, which reads as defending himself from the impending backlash that he’ll no doubt get.

The negative review may seem like it’s trying to troll and remove Paddington 2’s 100% rating, but Harrison seems steadfast in his criticisms of the film and has over 600 reviews on his website. The review might be a reaction to the 100% score, but it’s likely still legitimately how Harrison feels.

It’s important to remember that no matter how much you disagree with this review, it’s just an opinion and one of many. Paddington 2 still has 245 positive reviews and an incredibly high score, and a critic’s opinion shouldn’t take away from your own enjoyment of a film. At least Toy Story 2 is still at 100%.