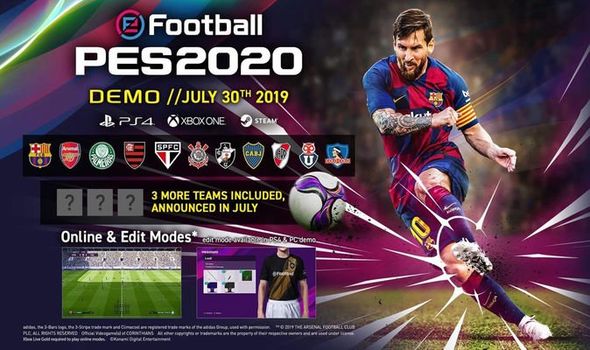 Pro Evolution Soccer fans should note the end of July as an important date for checking out the latest free games and demos on PS4, Xbox One and PC.

That’s because the new PES 2020 demo is scheduled to launch on all three platforms at the same time.

That means console gamers and those who enjoy collecting games on Steam will be able to download the new PES 2020 trial on July 30, 2019.

The latest launch in the classic footy series will begin with this new demo, with 14 different teams confirmed as being playable.

So far we know that Arsenal, FC Barcelona, Boca Juniors, River Plate will all be included in the demo going live later this month.

And the new release will come the same month as PES 2019 is made available for free on the PS4 via a PS Plus subscription.

Sony revealed their latest lineup for July 2019 a few days ago, which will be going live tomorrow, July 2.

We also know that Konami will be enabling online gameplay & access to edit mode for the new Pro Evo demo.

Other modes confirmed for PES 2020 this month includes Quick Play and Co-op, both of which will make for an enticing package to download.

The game’s full title will be eFootball PES 2020 and will feature an all-new mode called Matchday that will allow fans to come together for weekly events to compete in the biggest matches and secure victory against their rivals.

It follows news that Barcelona has renewed its partnership with Konami for PES 2020.

This means “extensive access to the club’s stars and prominent visibility within the real-world match day experience.”

Full body 3D scans have been conducted for every player in the team, alongside a re-created Camp Nou, FC Barcelona’s home ground.

“FC Barcelona has been a loyal and trusted partner for our company for the last three years and we are thrilled to have them by our side as we launch our most ambitious title yet in the PES series – eFootball PES 2020,” commented Jonas Lygaard, Senior Director Brand & Business Development at Konami Digital Entertainment B.V.

“FC Barcelona shares our ambition for eFootball and together, we shall take the sport to new heights.”

And fans are still waiting to find out when the new FIFA 20 demo will be released by EA Sports.

Both titles usually see new trials released before the full launch of the game later that year.

FIFA 20 is expected to get a new demo, however, it might not be launched for some time.

Judging by past releases, fans may have to wait until September 2019 to test out the latest FIFA experience on PS4, Xbox One and PC.