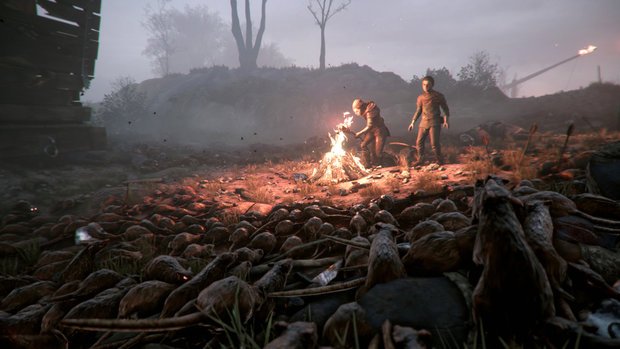 Some pretty traumatizing events occur and soon all Amicia is left with is herself and, for better or for worse, her younger brother, Hugo. Hugo and Amicia actually don’t know a lot about each other, but in my opinion, nothing pulls people together than everyone you love brutally dying before your eyes.

And by God, you really must stick together. Stealth is so important in this game, and leaving Hugo alone can leave you in a precarious situation – such as him crying out for help, alerting those who are after you to make their way towards your location.

It leads to a messy death half the time, and for players who love their freedom it can be a bit annoying, but it makes sense both narratively and through gameplay.

After all, both Amicia and Hugo are children versus the world, and Asobos Studios reflects that beautifully with the things that they can and can’t do.

But it isn’t just stealth in Plague Tale. There are hard-hitting, chest-hammering chase scenes and puzzles that demand you and Hugo work together in order to either escape, or get the upper hand of the enemies you encounter.

I found the chases a lot harder than being stealthy because sometimes it wasn’t clear on where to go, but that’s not to say they weren’t enjoyable.

Yet, at the end of my time with Plague Tale, one thing stood out above the rest: the depravity of humanity when on the brink of death. In spite of Amicia and Hugo being children, they are fighting against a world that is riddled with disease and a love of war during the French and British conflict of the Middle Ages.

It would be a haunting backdrop for anyone, but when placed behind Amicia and Hugo, two innocent children trapped in a world that doesn’t care about their plight? It feels that much more terrifying.