Players of the Harry Potter game will use their smartphones to battle The Calamity, which has tossed all sorts of dangerous magic – Confoundables – into the world of muggles.

Much like Pokemon Go, gamers will use augmented reality to run into familiar forms for fans of the Potterverse.

Casting spells on them by tracing lines on the phone’s screen will send them back where they belong, earning the player magical objects.

Pokestops, for instance, become Inns, where you can gather spell-casting energy rather than Pokeballs. 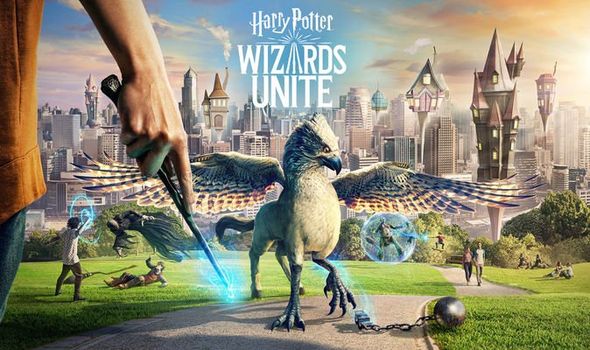 After levelling a few times, players will be asked whether they want to become an Auror, a magical zoologist, or a professor.

Each option has its own skills you can develop as you continue to play Wizards Unite.

Alex Moffit, a producer at developer Niantic, said: “Some skills are focused on you as an individual, for example improving the way that you explore the map.

“But a lot of the skills that I think are most interesting involve collaboration.

“I can actually cast abilities on my fellow witches and wizards, help heal them, give them a boost.”

These included the ability to brew magic potions, which can give players the edge in brutal fights.

Gamers can also discover ingredients by walking around IRL, and they will vary based on your location and even the weather conditions, or you can grow them in greenhouses scattered around the world.

Spending is never obligatory, but how easy the game is to play will depend on how packed your home neighbourhood is with Inns or other encounters.

Gamers will require these potions brewed or bought to tackle the Wizards Unite’s toughest challenges.

The hardest in Wizards Unite are fortresses and, like Pokemon Go’s raid battles, gamers will need to collaborate to attempt them.

Some encounters are harder than others, and may not be possible at all until players level-up.

Three years after its launch, Pokemon Go maintains a community of millions of fans.

And Mr Moffit believes that the Potter fanbase’s “energy and enthusiasm” will mean big things for Wizards Unite.