There were no Mega Evolutions during the Pokemon Trading Card Game's X&Y era. Nor were there Z-Moves as the popular tabletop wing of the franchise launched new sets alongside Sun & Moon. The Pokemon TCG has never mirrored what the video games bring to the table so much as offered distorted echoes — and the current era, Sword & Shield, makes this more apparent than ever.

That's because Pokemon Sword & Shield, with their dominant gameplay gimmick being Dynamax and Gigantamax, gave the TCG's creators the chance to introduce V, VMAX, and (to a slimmer extent) V-UNION. None of these terms match, but the inspiration is there; Pokemon V are grander versions of their ordinary counterparts, and they can evolve into bigger and badder VMAX to really crush the competition.

What about VSTAR, then? In the final few Sword & Shield era Pokemon TCG sets, this fresh V-themed upstart has come to usurp everyone's attention. What's the deal? Let's find out. 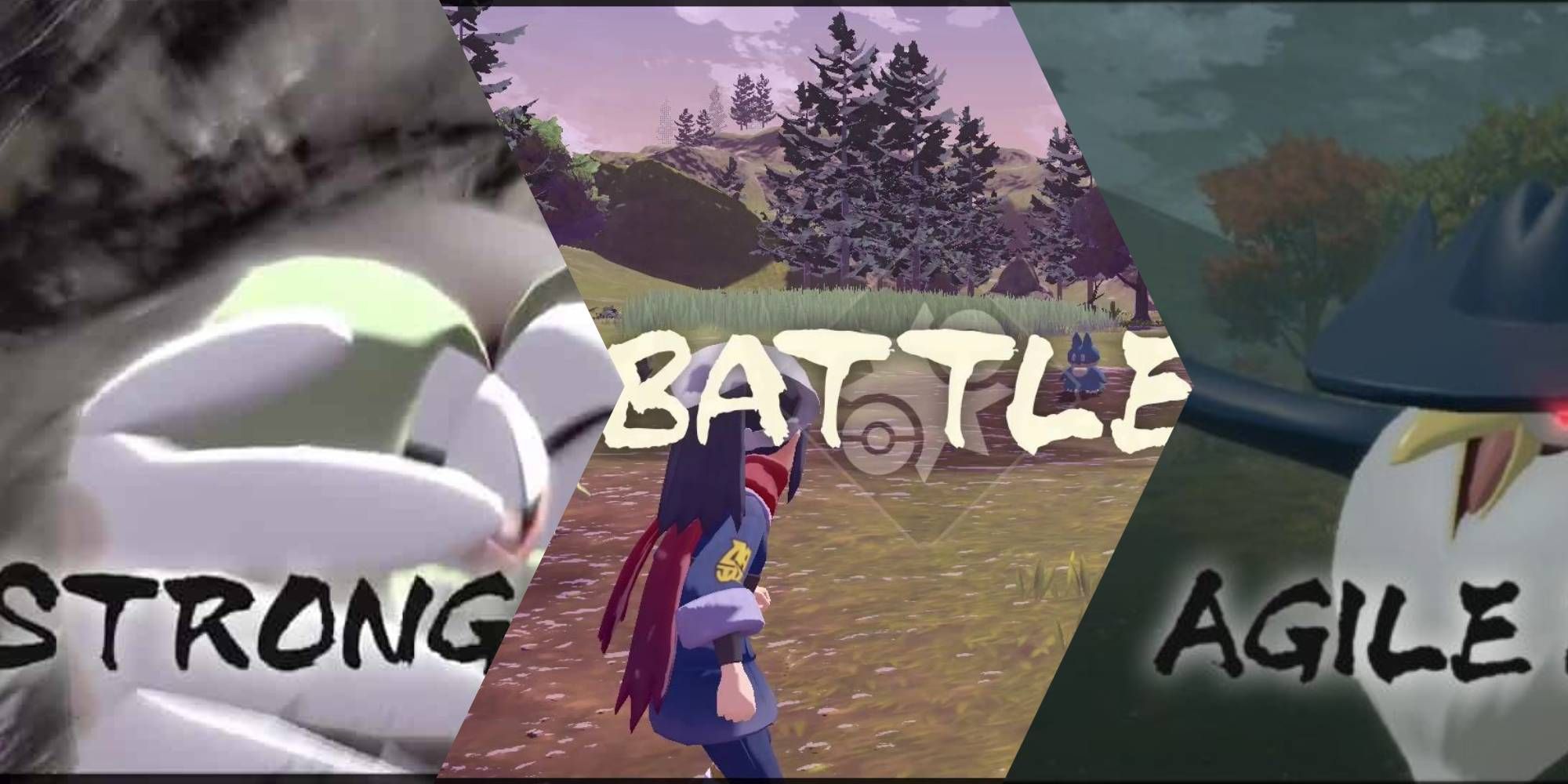 Let's borrow a term from Pokemon Legends: Arceus for a sec here. If you've played that game, then you'll remember how attacks can be shifted into either Strong or Agile styles; the former hits harder, and the latter is a bit thinner on the damage-dealing but often makes a big difference in turn order going forward.

To be clear, this isn't an apples-to-apples comparison, but it's not terribly far off. As of July 2022, there are 92 Pokemon cards with HP numbering 300 or higher. Of those 92 cards, 85 are Pokemon VMAX. The modern era broke the doors down on massive hit points, and the overwhelming majority make appropriate use of the word "MAX" in their titles.

None of these 92 cards are VSTAR. They're lighter, one and all. But how light is light, really? VSTAR Pokemon range from 250 to 280. In any era prior to the present, these would be the titans. This was the upper crust of durability, the stamina supreme, the place where the mightiest GX species dominated. But now, it's simply smaller. Towering, but still towered over.

So, our Legends: Arceus comparison is, indeed, a bit mixed. In Legends, Agile attacks are somewhat weak. If we're comparing Agile attacks to Pokemon VSTAR, then we need to understand that the decrease in endurance for VSTAR Pokemon is minimal. But it's there, clear as day, differentiating the most colossal creatures from the ones who stand not far beneath them. That's what it all boils down to — VSTAR Pokemon have a ton of HP. VMAX Pokemon have even more.

Why Introduce A "Weaker VMAX"? 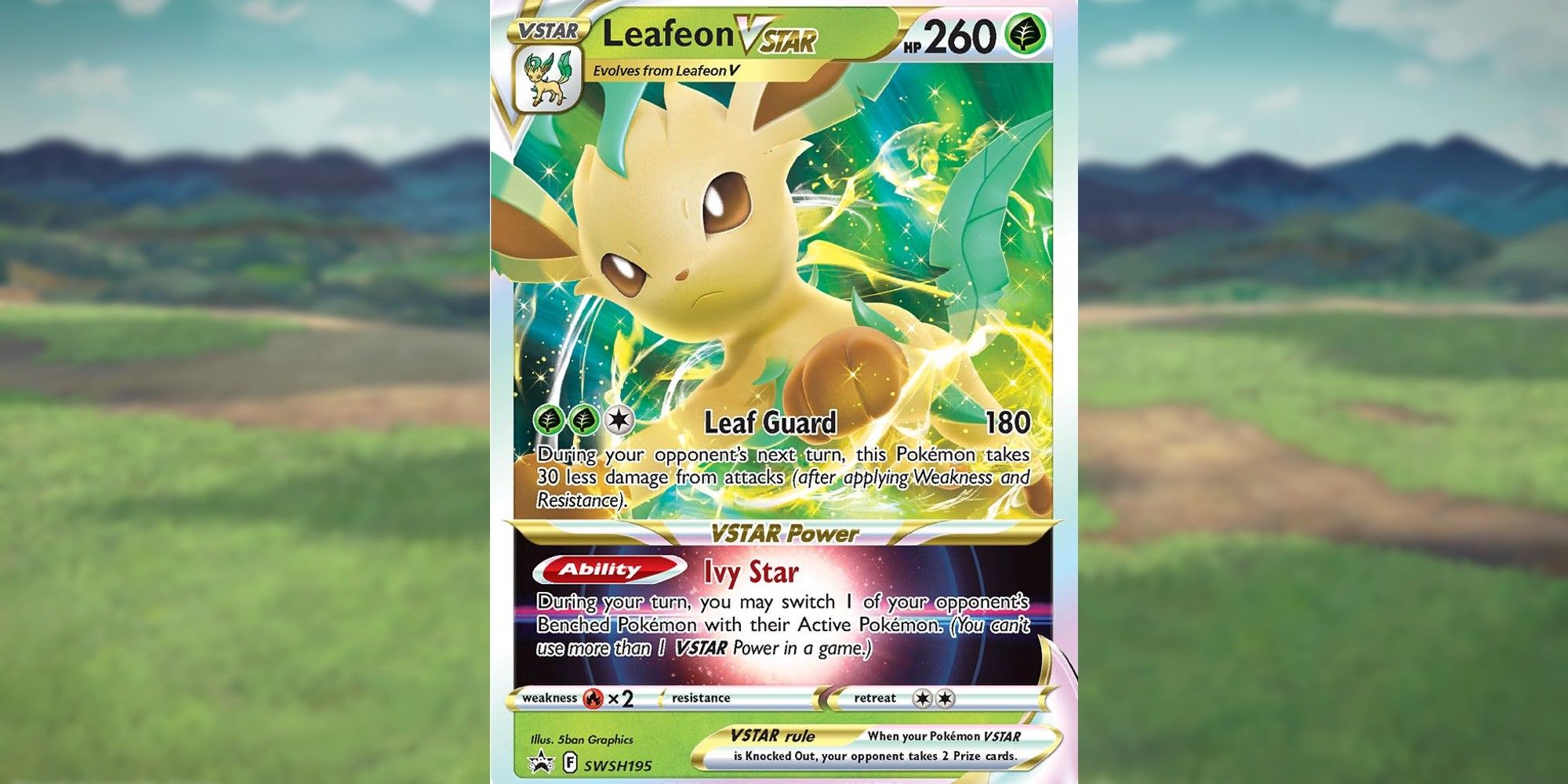 That would be a valid question, were things quite so black-and-white. As you might imagine, or at minimum surely you hoped, VSTAR Pokemon make up for their slight HP deficit relative to their gargantuan cousins by way of a unique type of move called VSTAR Power. You can only use a VSTAR Power can only be used once (!) per game, even if you have multiple VSTAR Pokemon in your deck.

Quick example: let's say you have a deck with two Charizard VSTAR and a Hisuian Typhlosion VSTAR in it. At one point, with one of your Charizard VSTAR set as your active Pokemon, you elect to use its VSTAR Power, Star Blaze. It costs three Fire Energy and one Colorless Energy to use and requires you to discard two Energy afterward, but it hits for an incredible 320 damage.

Hopefully, you used that attack well. You'll not only be locked out of using Star Blaze again for the rest of the match, on either Charizard VSTAR, but you've also given up your chance to use Hisuian Typhlosion's VSTAR Power, Shimmering Star.

So, it's not a matter of introducing a weaker variety of VMAX, then. VSTAR Pokemon are like glass cannons made of the sturdiest glass around. Their HP is still going to be an issue for most of the competition, but they'll crumble to dust in a straightforward slugfest against their VMAX rivals. VSTAR Pokemon trade a few dozen hit points for access to attacks that are either immensely powerful or cleverly strategic enough to break the game outright if permitted to be used more than once.

Since we've trumped-up Charizard VSTAR's Star Blaze for its outrageous damage output, let's mull over a couple of examples of more strategically devastating VSTAR Powers. There's Mewtwo VSTAR's Star Raid, which deals 120 damage to each of your opponent's Pokemon V. A quick burst from this at the right moment can turn the tide in your favor, but the ability to use this every turn would break the meta.

Hisuian Lilligant VSTAR uses Star Perfume. Using it lets you search your deck for up to five Grass Pokemon and/or Grass Energy, in any combination of your choosing. Damage isn't involved here whatsoever, but imagine if you could go rummaging around for five cards this easily every turn! It would still be broken.

Related:Pokemon TCG: What Are Radiant Cards? 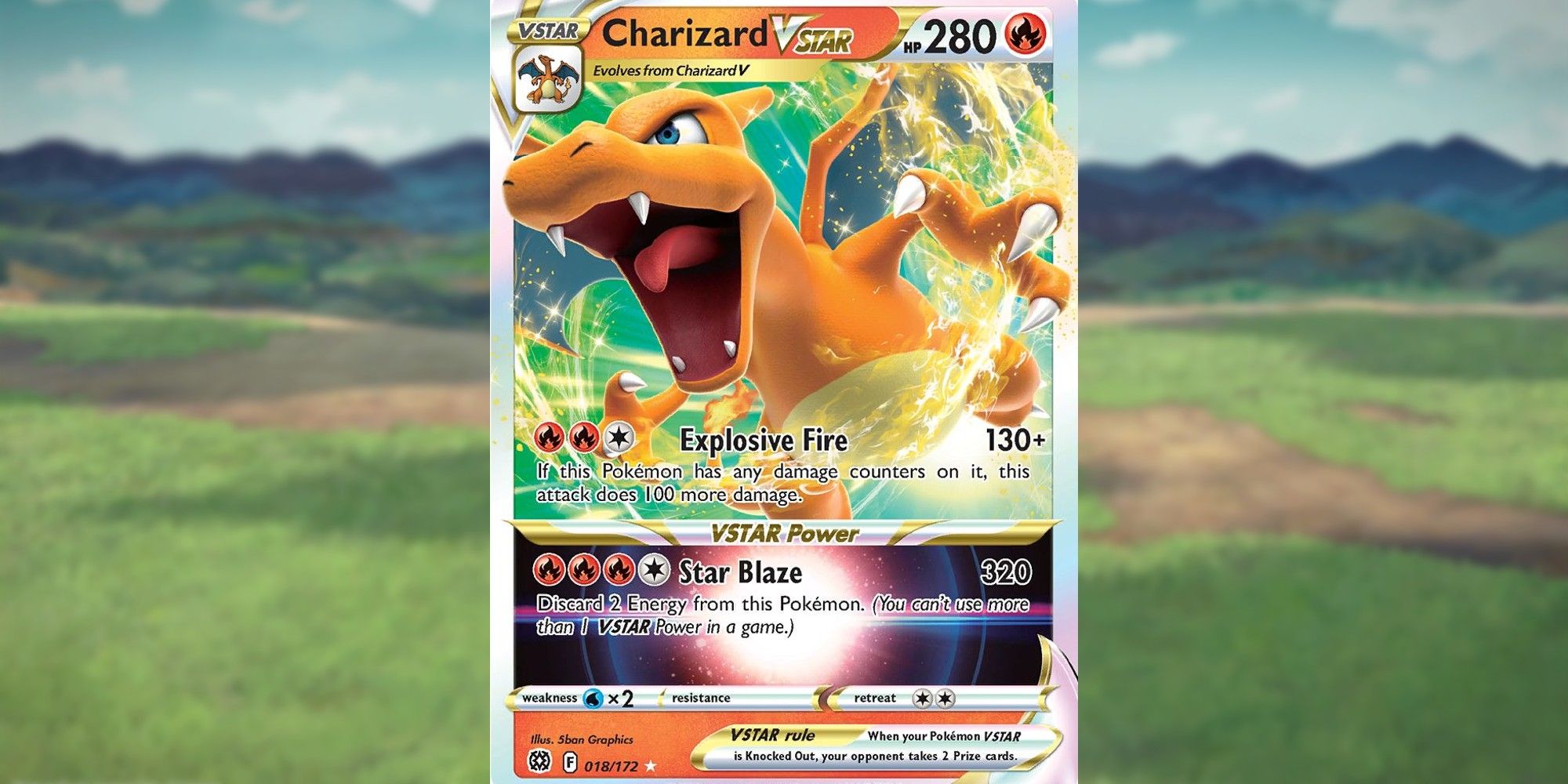 They sure can be. But that's the sort of answer we want from the Pokemon TCG — the kind that can go in either direction, demonstrating that it's up to one's savvy deck-building ability as well as their skillful deployment in battle.

Since bashing different types of Charizard cards against each other is a bit like taking two Tyrannosaurus action figures and smashing them together, and everyone knows that is the single coolest thing to do on the playground, let's zoom in on Charizard VMAX versus Charizard VSTAR. How would they fare against each other in one-on-one play?

Well, Charizard VSTAR has that aforementioned move, Star Blaze, that will strike Charizard VMAX for 320 damage. It also has a regular attack, Explosive Fire, which hits for 130 with the added perk that if Charizard VSTAR has any damage counters on it, that 130 becomes 230 instead. Not bad.

Whew, but look at Charizard VMAX. It has 330 HP, meaning it just survives Star Blaze, all other things being equal. Its main attack, and it should be noted that VMAX Pokemon can use their main attacks as many times per match as needed, is called G-Max Wildfire. G-Max Wildfire hits for 300. Charizard VSTAR has… 270 HP.

In a head-to-head encounter with no Tools, interference Abilities, applicable Stadium effects, and so forth, a VMAX Pokemon will tend to just barely outlast a direct bout against a VSTAR Pokemon. But the results, as seen above, are often quite close, indeed. This is of the utmost importance, because…

It's Better to Lose a VSTAR than a VMAX

By far the biggest weakness of VMAX Pokemon is how costly it is when they finally go down for the count. As players of the Sword & Shield era of Pokemon TCG know only too well, defeating a VMAX nets three Prize Cards. They're each worth half the total Prize Card pool per game. If you can bring two of them down, you've already won.

Of course, doing so isn't easy. But it's telling that The Pokemon Company recognized just how mighty these cards are and made their heavy usage such a risk. A lot of that is tied to their truly top-of-class HP, which is something that, as you know, VSTAR Pokemon are lighter on. As a result, and just like the conventional Pokemon V that evolves into either VMAX or VSTAR, defeating a VSTAR nets only two Prize Cards instead of three.

Let's go back to our playground-tumbling Charizard deathmatch example. If the player with the Charizard VSTAR pulls off a Blaze Star for 300 damage before Charizard VMAX can retaliate with G-Max Wildfire, and if the VMAX isn't healed between turns, that hulking behemoth only has 30 HP remaining. Sure, their player has downed a VSTAR. Yes, that entitled them to two Prize Cards. But there are, frankly, far more attacks in the TCG that deal 30 or more damage than those that deal less. There are so many ways to finish off that VMAX.

And what if your Charizard VSTAR had Power Gloves equipped? Such a small alteration in the hypothetical encounter, and it's enough to change the tide entirely, dealing the 330 damage necessary to knock out a Charizard VMAX at full health.

Ultimately, that's the long and short of it. VSTAR Pokemon are less risky overall, and the difference in core power isn't necessarily equivalent to that extra Prize Card involved in knocking out VMAX Pokemon. Charizard-versus-Charizard is just one of the hundreds of potential match-ups, of course, but pound for pound, that's how the cookie crumbles — both VMAX and VSTAR Pokemon have plenty of utility in the Pokemon Trading Card Game.