As businesses struggle to adapt to a “new normal” under global lockdowns, technology is helping to buffer the impact. Ecommerce is booming, and companies that weren’t already embracing online sales have had to quickly pivot, with local pizzerias turning to digital platforms and Google offering various smarts to help offline merchants make the transition.

Now San Francisco-based PredictHQ is looking to leverage big data to give small businesses insights into shifting consumer trends, allowing them to predict when demand for their services is likely to surge by monitoring live TV viewing figures.

PredictHQ has so far built its business by aggregating datasets from real-world events, such as concerts, sports, and public holidays, using machine learning to help companies forecast demand for their services. PredictHQ also throws its own proprietary “hard to find” data into the mix and funnels it all into an API it licenses to heavy hitters such as Uber, Domino’s, and Booking.com. Armed with these predictive insights, hotels, pizzerias and other companies can figure out how much demand they can expect when a major conference or rock concert is in town. 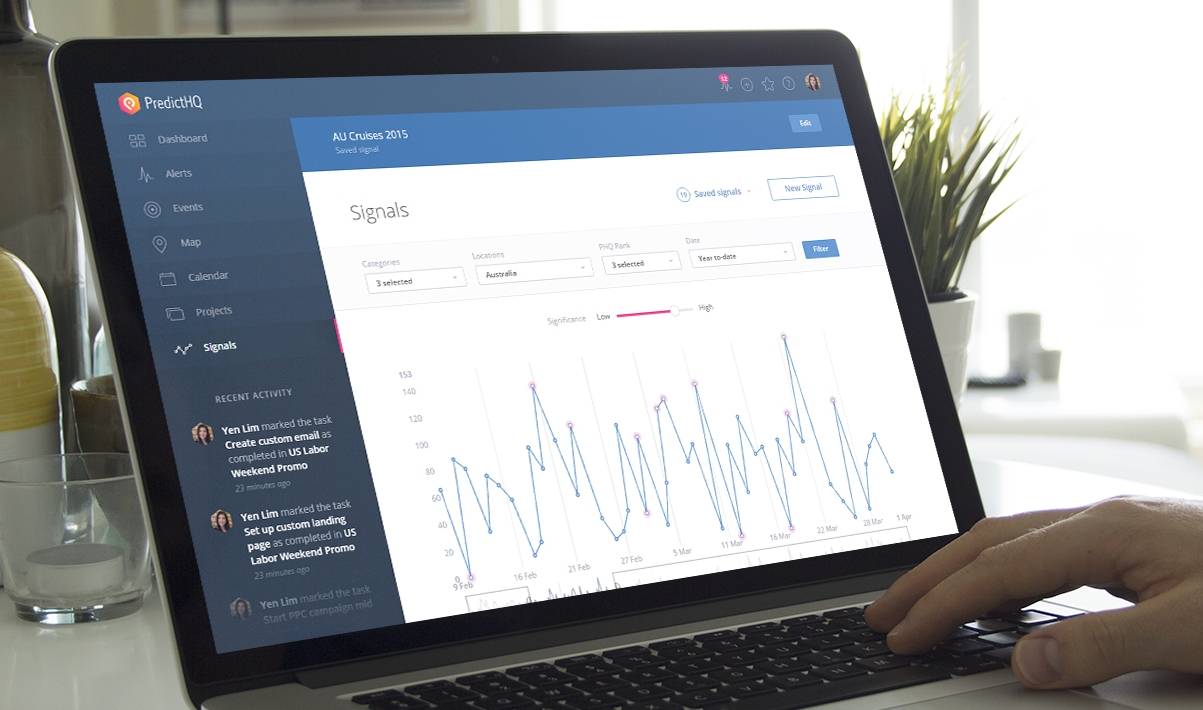 Above: PredictHQ dashboard on a laptop

PredictHQ is gearing up to launch a live TV events feature — currently available in beta — in the coming months, with an initial focus on live sporting events.

TV sports viewership is broadly up, compared to the corresponding figures last year, as stadiums remain off-limits during lockdowns. Viewership data is generally available after an event, while forecasts are often used to determine how much an advertiser should spend — though this is usually done via a “designated marketing area,” which typically includes several cities.

PredictHQ offers predictions on a county-by-county level, which is more useful for local businesses trying to figure out how many people in their immediate locale will be at home watching the big NFL game. These predictions are based on a vast swathe of data, some of which PredictHQ has already gathered over the past few years — including in-depth knowledge about teams, players, venues, locations, and more. This data served as the starting point for new features that help predict TV viewership, such as the quality of the match-up between teams, recent performances, timing (i.e. preseason, regular, or playoff), and whether the teams are home or away.

“Game-by-game data at the county level is critical for demand-planning because of the range of sports games, when they are televised  — you are less likely to order a pizza at 10 a.m. in the morning — and how viewership evolves throughout the season. For instance, a team doing better or worse will shift viewership,” PredictHQ CEO Campbell Brown told VentureBeat. “We know from their results that a team’s average game viewership can increase by up to 15% throughout a season when they are winning often.”

Above: PredictHQ team: CEO Campbell Brown is second from right

So how could, say, a food delivery business actually use this data to figure out how many pizza bases and salami slices to prepare? They would have to dig into their historical data to see what demand has been around live sports events and correlate this with PredictHQ’s forecast data.

“Once they have identified this impact historically, they will be able to use our predicted viewership to train their forecasting models, reducing their forecasting error rate because they will know what is dynamically driving previous demand anomalies,” Brown said.

It’s clear PredictHQ is more likely to be used by bigger chains than mom-and-pop operations, and indeed Domino’s is already a client, though it’s not clear whether it is on board for the live TV events beta. However, Campbell did say that it was “working with one of America’s most loved food delivery brands” and a single college football game on its own created a 13% increase in pizza deliveries in Lake County, Chicago.

Nothing is limiting this product to live TV sports, but it is certainly the most obvious use case, given the frequency of such events and a viewership that can create massive demand spikes. But this could be expanded to cover other major TV events, such as presidential addresses or Game of Thrones season finales, though the machine learning models would need to be adapted accordingly. “It’s absolutely on our roadmap to build this capability,” Brown said.

Moreover, food delivery isn’t the only business that could benefit from this data. Transport companies — such as Uber, another PredictHQ client — stand to benefit, as their driver networks are often used to deliver food and friends who travel to each other’s houses to watch the big match will further impact demand for rides.

Founded in 2015, PredictHQ has raised north of $30 million since its inception, including a $22 million tranche in February — so it’s sufficiently funded to weather any COVID-related storms. Brown said that while the company had already been planning to integrate live TV events into its big data platform, the pandemic meant it had to rethink its product development priorities.

“Our vision is to predict the catalyst behind any form of demand, and we’ve been planning this feature for over a year now,” he said. “When COVID-19 really started to impact the U.S. and Europe, we adapted the sequencing of our roadmap to bring features such as this forward.”

PredictHQ plans to officially launch live TV events in the U.S. later this year and to expand it to Europe in 2021.