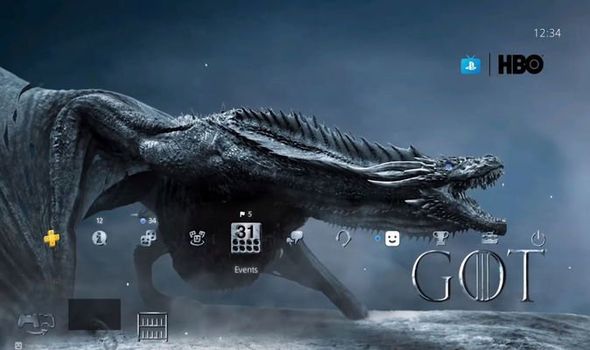 Game of Thrones fans who own a PS4 can celebrate the return of the show by collecting a new theme for their PlayStation home screens.

It’s a nice epic image, switching between two scenes that help set up the final season of the show nicely.

The dynamic fire & ice dragon theme for your PS4 Console can be collected by heading over to the PS Vue page for the series and starting a quest.

This essentially means watching a bunch of videos and collecting the code you need to claim the special GoT prizes.

“Get your PS4 console ready for the final season with these limited edition Game of Thrones avatars and theme brought to you by PlayStation Vue. Begin your quest by watching each of the videos to redeem each reward.”

Quest Thress includes the new Dragon Theme, with Quest One providing a House Sigil of your choice and Quest Two offering a Character Avatar.

The good news is that you don’t have to be a PlayStation Vue customers to get these bonuses.

You can complete all the quests and unlock the PlayStation Store codes you need to personalise your PS4 console.

To change your profile’s avatar, log in on your PS4™ system, then go to [Profile] [Edit Profile] [Avatar].

The bad news is that only a particular group of Game of Thrones fans will get to unlock the new theme.

This is due to the codes only working on the North America PlayStation Store, so customers in the UK won’t have access.

While it might be disappointing to miss out on this special gift for Game of Thrones fans, there are other freebies to unlock this week.

As a special anniversary gift to God of War fans, Sony is giving PS4 owners a new dynamic theme.

The week-long God of War celebration kicks off with the free PS4 theme, which can be downloaded right now from the PlayStation Store.

A special God of War Avatar will follow this set, releasing for free on Wednesday, April 17.

“In honour of you, our fans, we’re starting a week-long celebration of the one-year anniversary of this God of War,” reads a Sony Santa Monica post.

“I’m very happy to indulge you with a small token of our appreciation. We’ve crafted a fantastic God of War Anniversary character PS4 avatar set that will be available free this Wednesday, and a PS4 dynamic theme available right now that will bring you back to serenity with Kratos and Atreus in the Lake of Nine.

“They’ll both be free at PlayStation Store (search God of War), whether you own the game or not.”