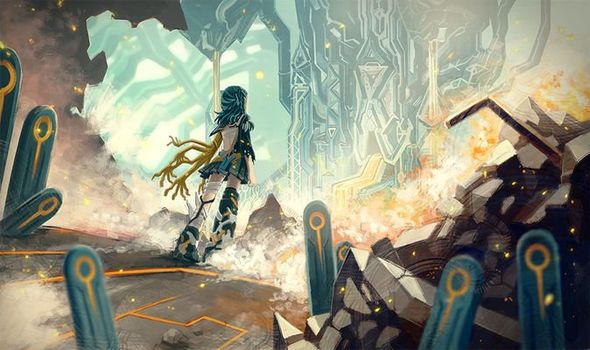 Launching this year on PS4, Xbox One and Nintendo Switch, Giga Wrecker Alt will become one of a very few number of Game Freak titles to feature on all three platforms.

The studio famous for creating the Pokemon franchise is also busy developing the new Sword and Shield title coming exclusively to Switch.

However, before that happens, it appears Giga Wrecker Alt will be launching on all three consoles later this year.

Giga Wrecker originally released on PC and was well received as a 2D action adventure game where you can manipulate debris and explore a world invaded by an army of evil robots.

This unique project is now being ported over to PlayStation, Xbox and Nintendo platforms and may even have a release date.

A new listing for the game has been found on the Japanese eShop that suggests Giga Wrecker Alt will be launching on May 2.

This would line up with a recent media preview from Game Informer that suggests the new title will be released during Spring 2019.

Spring officially ends on June 21, meaning May 2 would fit perfectly with the idea that Game Freak will launch Giga Wrecker that month.

It should be noted that no official announcement has been made on the subject by Game Freak so this news needed to be treated with caution until fully confirmed.

There’s a chance that this new listing on the Nintendo eShop refers only to Japan, or could just be for the Switch console.

However, it seems likely we will be getting some kind of news very soon regarding the new launch from Game Freak.

For those who want a bit more information on the story of the new game, here’s the official background from Game Freak: “The world turned into ruins after a sudden invasion of the “Ajeets”, a mysterious army of deadly robots.

“Three years since then, a girl appears in front of Reika Rekkeiji, who sits hopelessly inside the Ajeet’s prison. “You are a kind person. But that kindness will cause the extinction of the whole human race!”

“The girl leaves strange words, before being abducted by the robots. Reika gets fatally wounded during the chaos. To survive, she agrees with the mad scientist Dr. Kouzuki to undergo an operation and become a cyborg.

“Now she has the ability to fight the savage robot army.”

Giga Wrecker will be launched on all three consoles digitally, while Limited Run Games will distribute the PlayStation 4 and Nintendo Switch physical versions.

When it comes to changes from the original PC game, Giga Wrecker Alt will add 20 additional puzzle stages to its campaign, a new companion character to assist players with the game’s increasingly challenging puzzles, and an “Ironman” mode with 5 times the damage than the regular mode.

Alt will also overhaul the original localization to enhance the user experience, bringing with it 11 in-game languages, including Italian and Traditional Chinese.

It appears Giga Wrecker Alt will be launching before Game Freak’s next major project, Pokemon Sword and Shield.

Officially unveiled during a recent Nintendo Direct event, the latest instalment in the Pocket Monster franchise will take players to a new region.

Inspired by the British countryside, Sword and Shield will include Generation 8 Pokemon populating the Galar region.

Three starter Pokemon – Sobble, Gookey and Scorbunny – have been revealed but there is still a lot we don’t know about the exciting new Switch project.