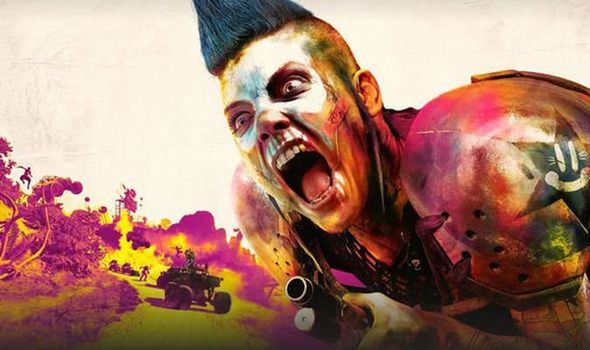 Rage 2 review scores are being revealed today as the embargo lifts for release day.

Fans will soon be able to check out the new first-person shooter being published by Bethesda.

The game follows a character named Walker, who is described as the last Ranger of Vineland.

“With a wide array of weapons, vehicles and strange powers, Walker sets off to take down the tyrannical Authority,” reads the official description.

“A Ranger’s arsenal isn’t limited to the abundance of upgradeable weapons and toys at their disposal.

“Fuelled by Arkist blood, these elite fighters are the only people in the world who can harness special Nanotrite abilities.”

Rage 2 will feature different ways to explore the Wastlelands and also offer gameplay not far removed from Doom.

The Gravity Dart Launcher, for example, can be used to fire enemies into the blades of a wind turbine.

You’ll be able to set enemies on fire with the Firestorm Revolver or make them explode with the Hyper Cannon.

Or you could just sneak up on an enemy and kick them off a mountain.

The first Rage 2 review scores are now being shared and you can find a collection of them below.

Game Informer Review 7/10: While traversing the land, tons of various landmarks and side destinations await discovery, but they’re all lackluster diversions that lose their luster after you’ve done each type of encounter a few times. Whether you’re blowing up a turret or going sewer-crawling to smash some pods, you can see the vast majority of what the side content offers after a few hours. While the critical path takes about 8 to 10 hours, Rage 2 has tons of optional content to explore – you just won’t want to do it.”

US Gamer Review 4/5: “Rage 2 is the kind of game where I finished it wondering if Avalanche and id Software could’ve stretched a little further. I wish there was customization for the other vehicles, more weapons skins, further regions. But I also wrote earlier this year about short blockbusters being a good thing. At around 12-15 hours for the campaign and another handful for clearing the rest of the map, Rage 2 fits right in.”

Gamespot Review 6/10: “Rage 2 is at its best when you’re given the chance to keep up a gratifying momentum in combat, but struggles to setup the scenarios its combat deserves. It’s satisfying in the way clearing out an open-world checklist is, especially because powers are such a joy to use. The disappointment comes from the fact that those activities are rudimentary in nature and the decent ones end well before you get your fill.”

IGN Review 8/10: “Though Avalanche hasn’t quite figured out what makes a world feel alive and dynamic or how to make good use of its vehicles, it absolutely nails the moment-to-moment combat thanks to a Doom-inspired energetic pace that few shooters manage to pull off. Combined with a steady stream of great weapons, abilities, and upgrades, its firefights are constantly reinvigorated even as mission objectives become repetitive.”

Shacknews Review 5/10: “The story is nothing to write home about, and honestly feels more like the kind of story you’d find in a linear action game, not a massive open-world title. Something just doesn’t fit with it, and it’s a shame that the developers didn’t take more time to explore the wasteland and really dive deep into it all to provide a good story that engrosses players. The fact that the main campaign only lasts 10 hours or so, tops, is outrageous, and the sheer promise of “explore an open world with great combat” just isn’t enough to justify the price tag that Bethesda has placed on Rage 2.