Assassin’s Creed: Odyssey truly went all out with its RPG elements and player-specialization. There are three Skill Trees in Odyssey: Hunter, Warrior, and Assassin. This allows players to spec themselves into the playstyle they want to embrace. Whether you want to be a skilled archer, tanky warrior, or stealthy assassin, Odyssey has you covered.

One aspect that made Odyssey different from Origins was the way in which you can select your abilities. Instead of having all skills active, you can now match specific abilities with button prompts of your choosing. The following abilities are standouts among the rest. Some may complement your build perfectly, while others are a jack-of-all-trades that you can use in any playstyle. Here are the 10 best abilities in Assassin’s Creed: Odyssey.

Updated by Madison Lennon on February 6, 2020: There is a lot of buzz right now about what the next Assassin’s Creed game will be. Fans are eagerly awaiting any news on the forthcoming game int he franchise with hopes that it will be as amazing as both Odyssey and Origins were.

We thought now would be the perfect time to revisit this list of the best abilities you can earn in Assassin’s Creed: Odyssey and update it with a few other great choices out of the vast many selections you’re offered. 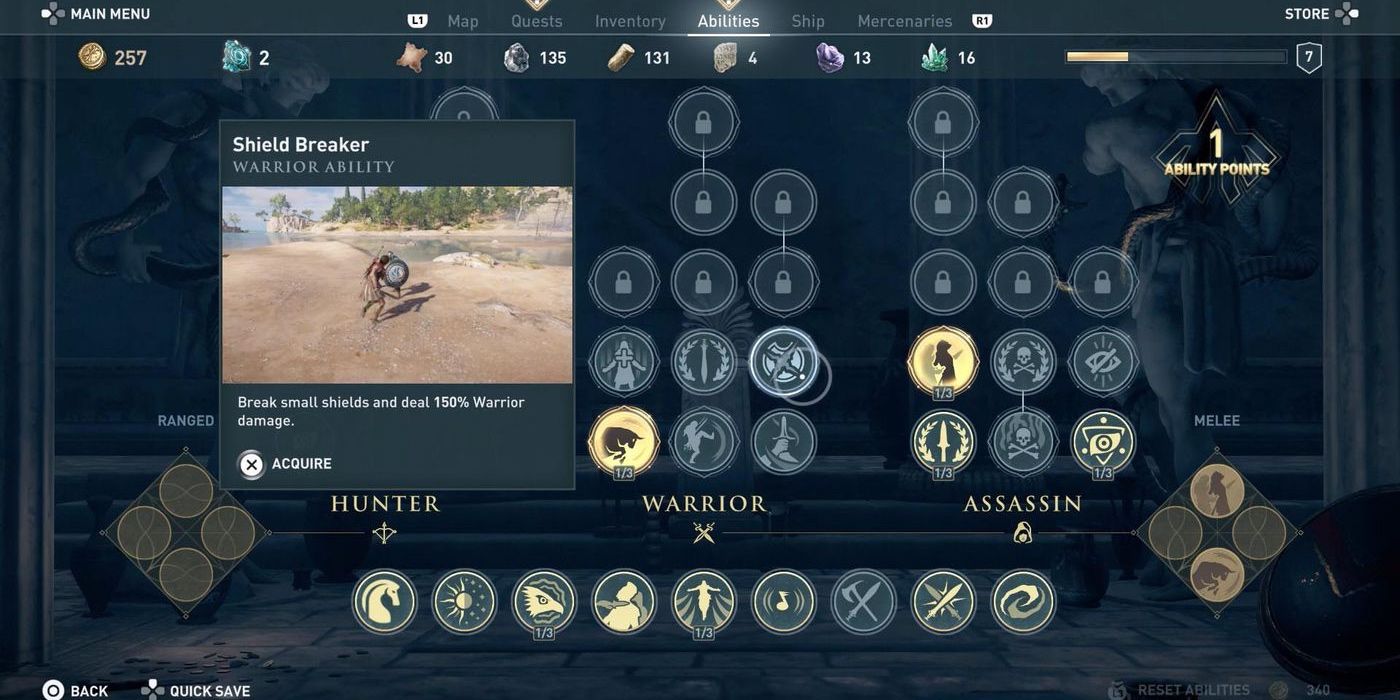 You’ll encounter a lot of enemies in the game that carry huge shield. It can quickly get really frustrating trying to get around them, or to parry and trick them into showing their back so you can kill them.

Shield Breaker is an excellent ability that lets you, fittingly, break their shields. Once you upgrade it twice, it gets to be so powerful that it can severely damage your enemy with 250% power and the shield will explode into shrapnel that can then harm any nearby enemies, too. 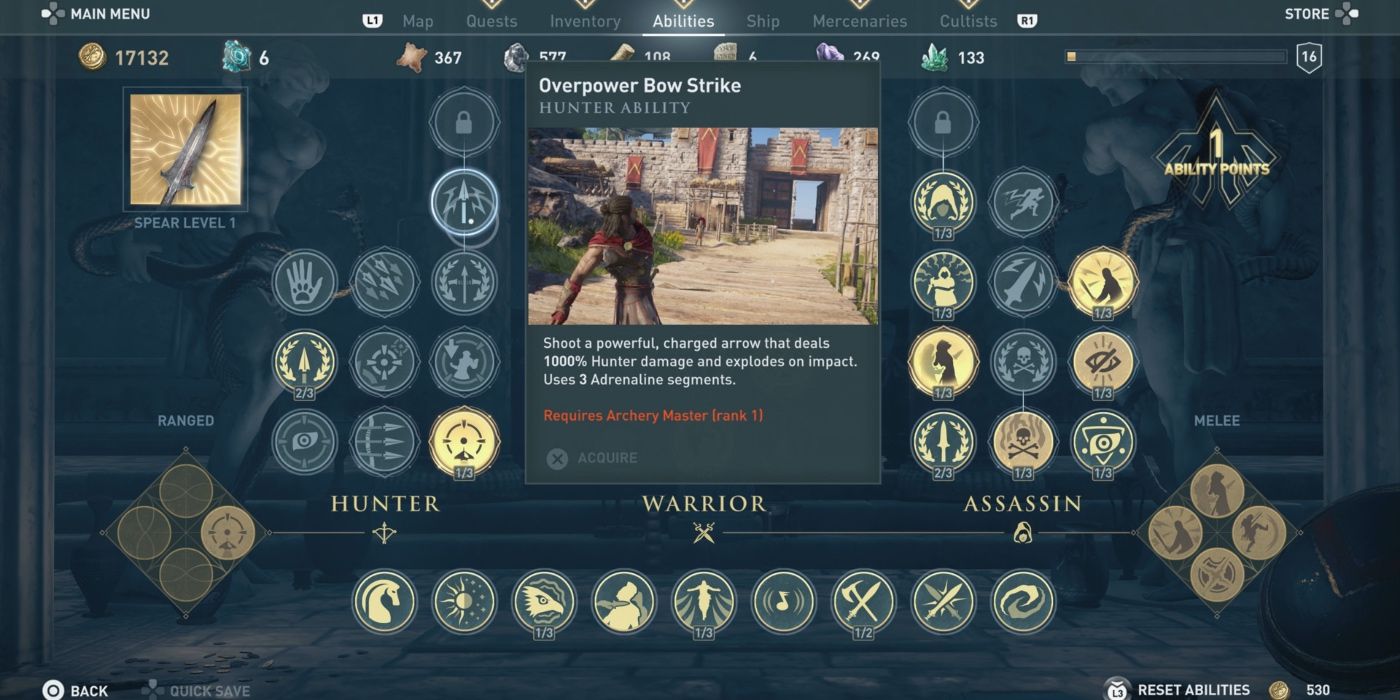 For those players that enjoy using their bow in combat to pick off their enemies quietly, the Overpower Bow Strike is a fantastic ability. When you upgrade it to the final tier, the move will charge an arrow that delivers 1500% Hunter damage.

Not only that, but it explodes when it reaches its mark, meaning it releases even more damage because of the various arrow shards being sent towards your enemies. It’s perfect for anyone skilled in archery. 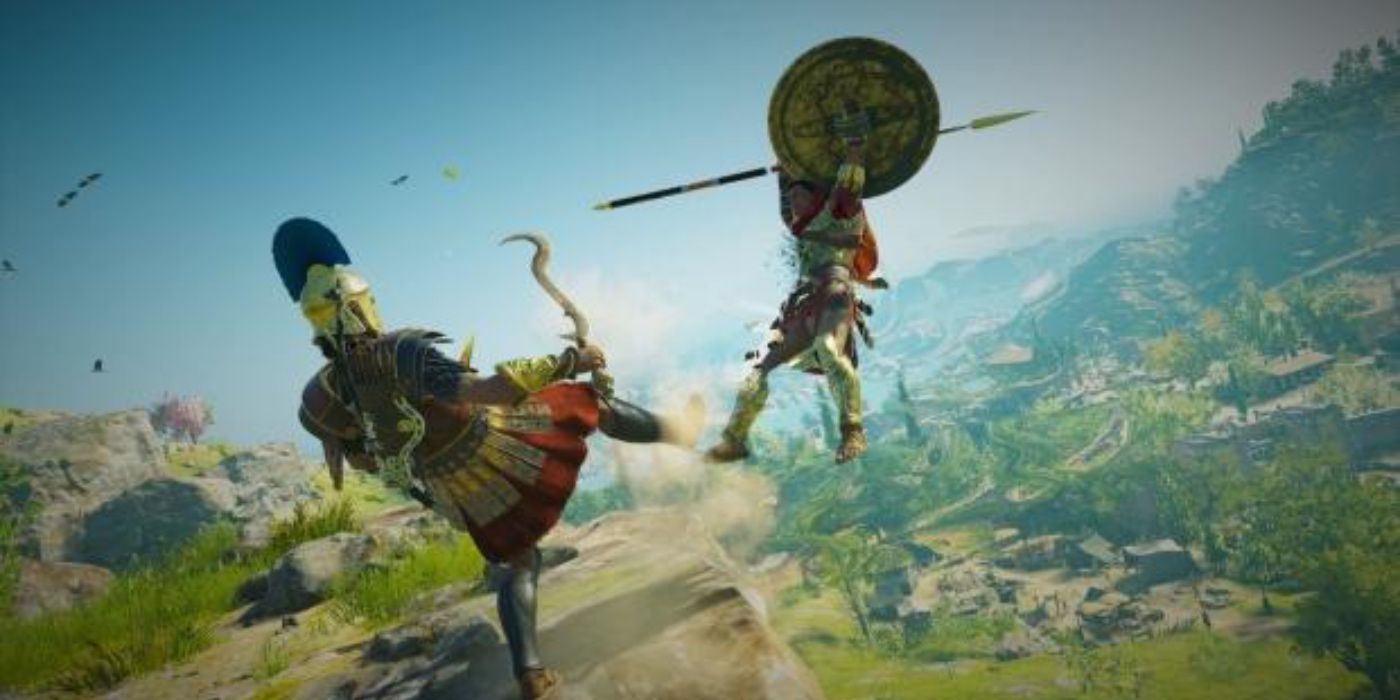 Not only is this move extremely powerful once it is fully upgraded, but it’s also very fitting of the time period and it’s a lot of fun to execute. With Spartan Kick, your character will deliver an incredible blow to your opponent with their foot. Not only that, but you can kick enemies off of cliffs, buildings, and more with this move, sending them plummeting through the air.

It won’t kill your target since it leaves you the option to recruit them, but it will put them close to death once you upgrade the move. The final upgrade delivers a hit so intense, it creates a shockwave that can also harm nearby enemies. 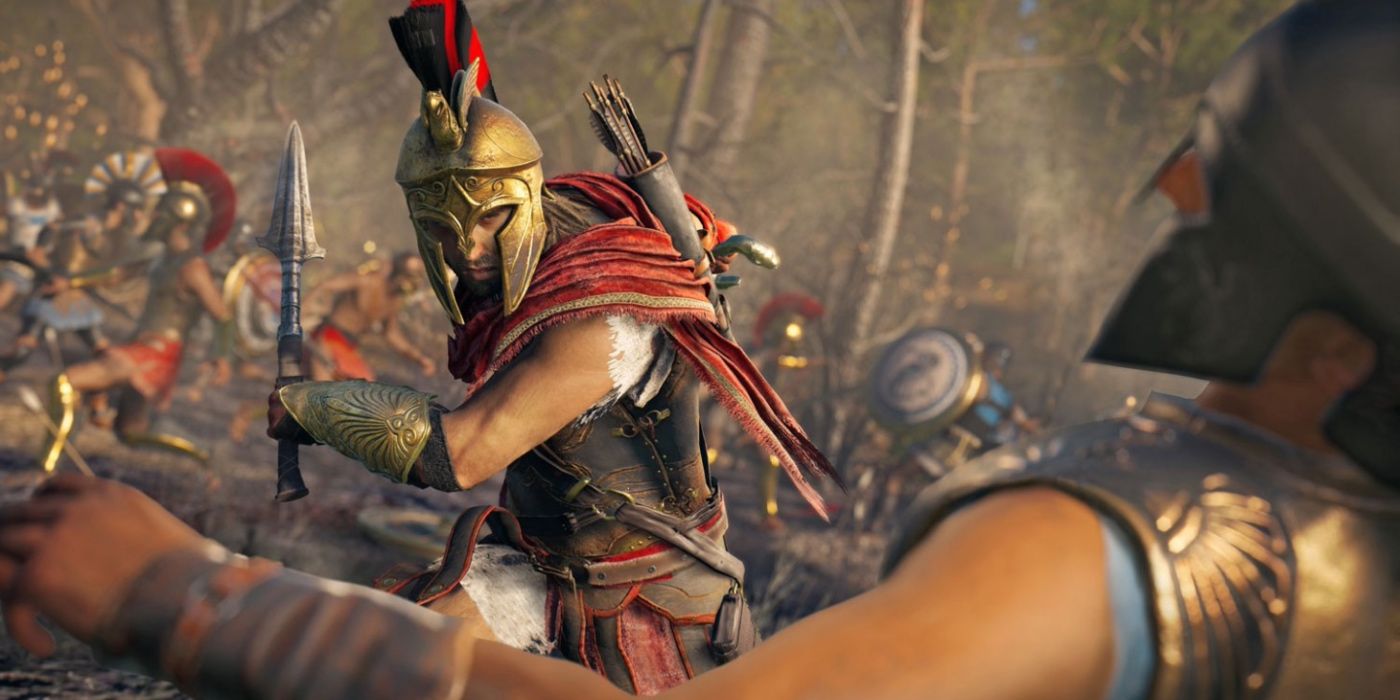 Have you ever been in the middle of a fight and then suddenly some random mercenary joins in, or you simply get overwhelmed by the number of enemies you’re suddenly facing off against at the same time? This is especially relevant if you accidentally slip up and let yourself get sighted, losing your stealth tactic.

Well, Call to Arms gives you the ability to invite a lieutenant into the battle that will distract your enemies while you regroup. If you enhance the ability to the maximum level, the lieutenant will be enraged and even more powerful. 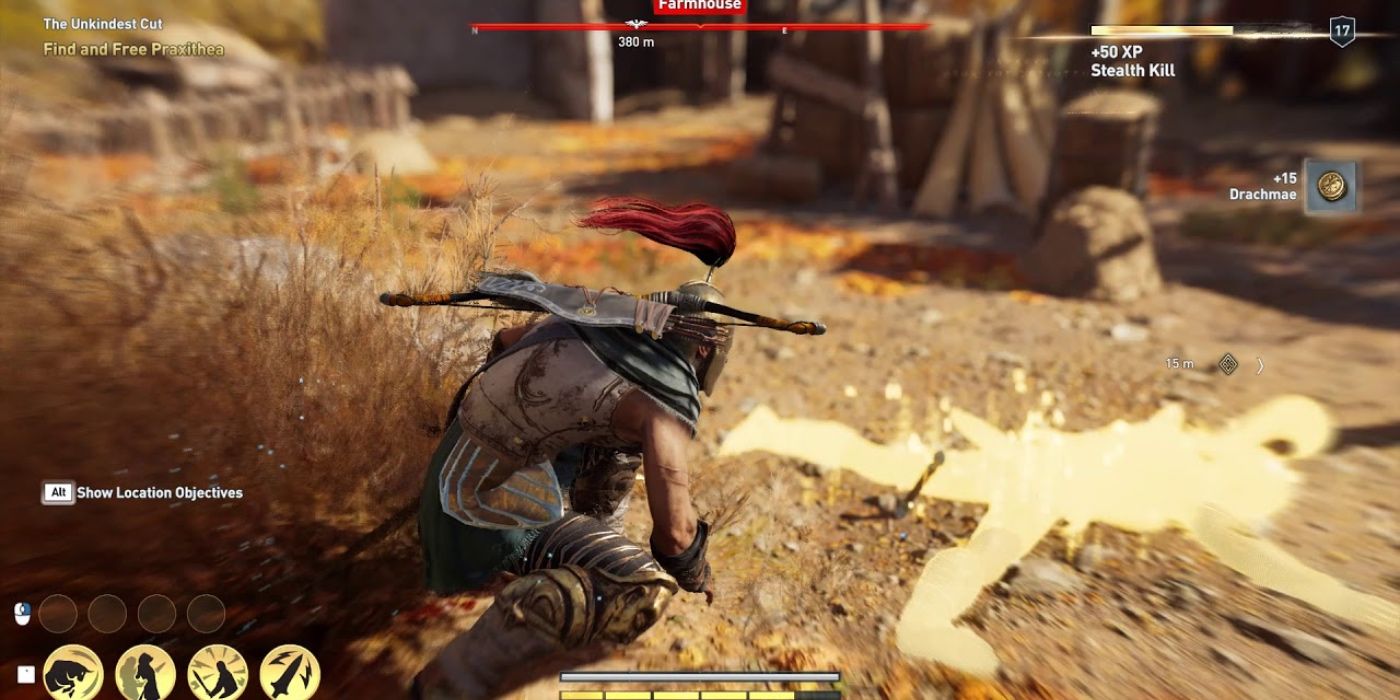 For those who are skilled assassins and enjoy killing while remaining undetected, Death Veil is an invaluable skill. However, it takes a while to achieve it as you won’t be able to use it until you reach the master assassin branch of the skill tree.

That said, what makes Death Veil so cool is that it allows you to kill any opponent with assassination and then make their body impossible to detect. Instead of stressing about hiding the bodies to keep your cover, you won’t have to, because the ability cloaks them for you. 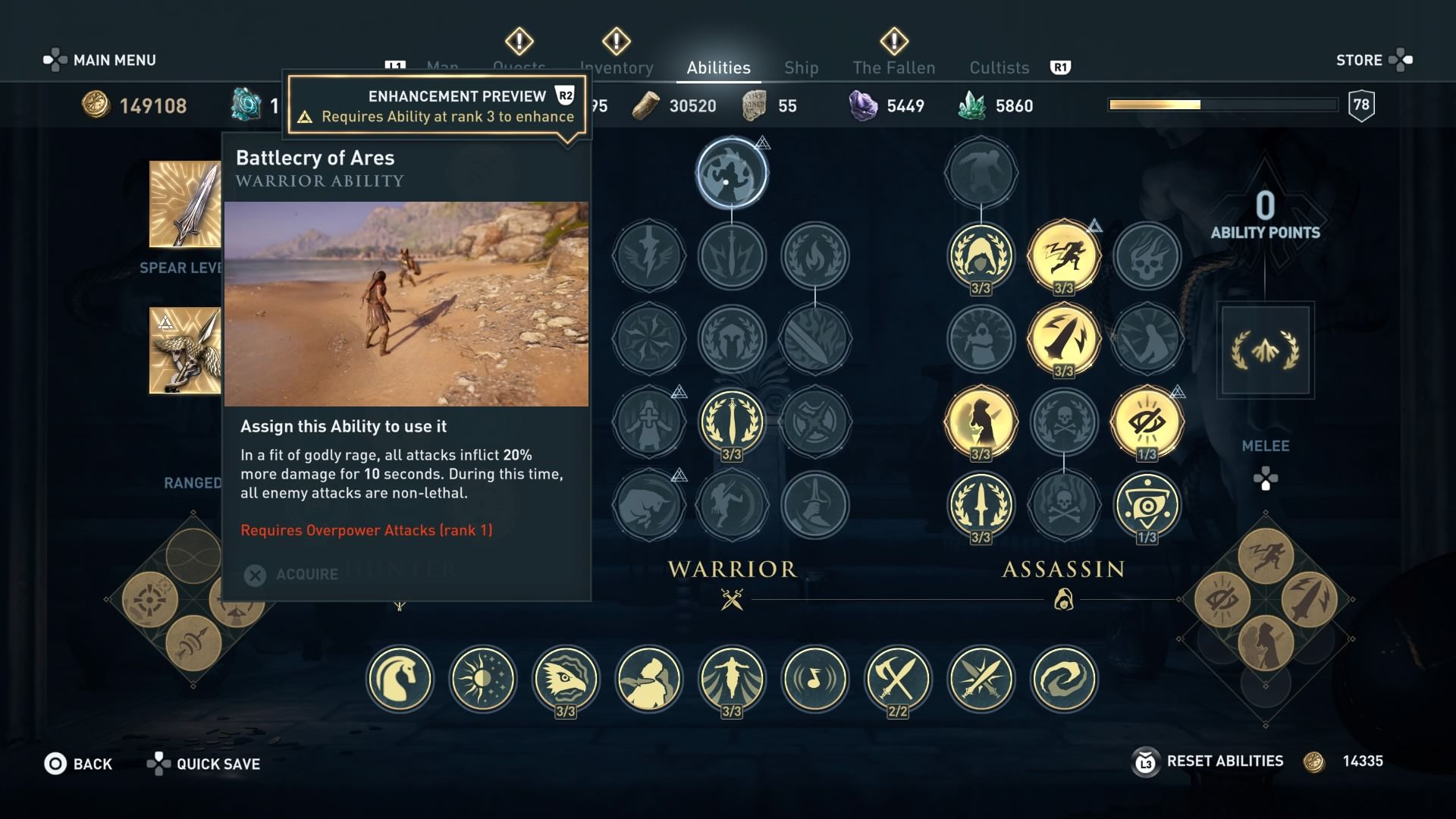 The Battlecry of Ares ability is almost the exact same as Kratos’s Spartan Rage in God of War (2018). For up to 20 seconds, you can deal 50% damage. To make this even more powerful, all attacks received increases the damage while active. Also, all enemy attacks are non-lethal. The damage boost is always appreciated, but this skill is mainly needed to keep yourself from dying if you feel you are in danger. If that one boss is absolutely relentless, do not hesitate to activate Battlecry of Ares since it requires no Adrenaline. 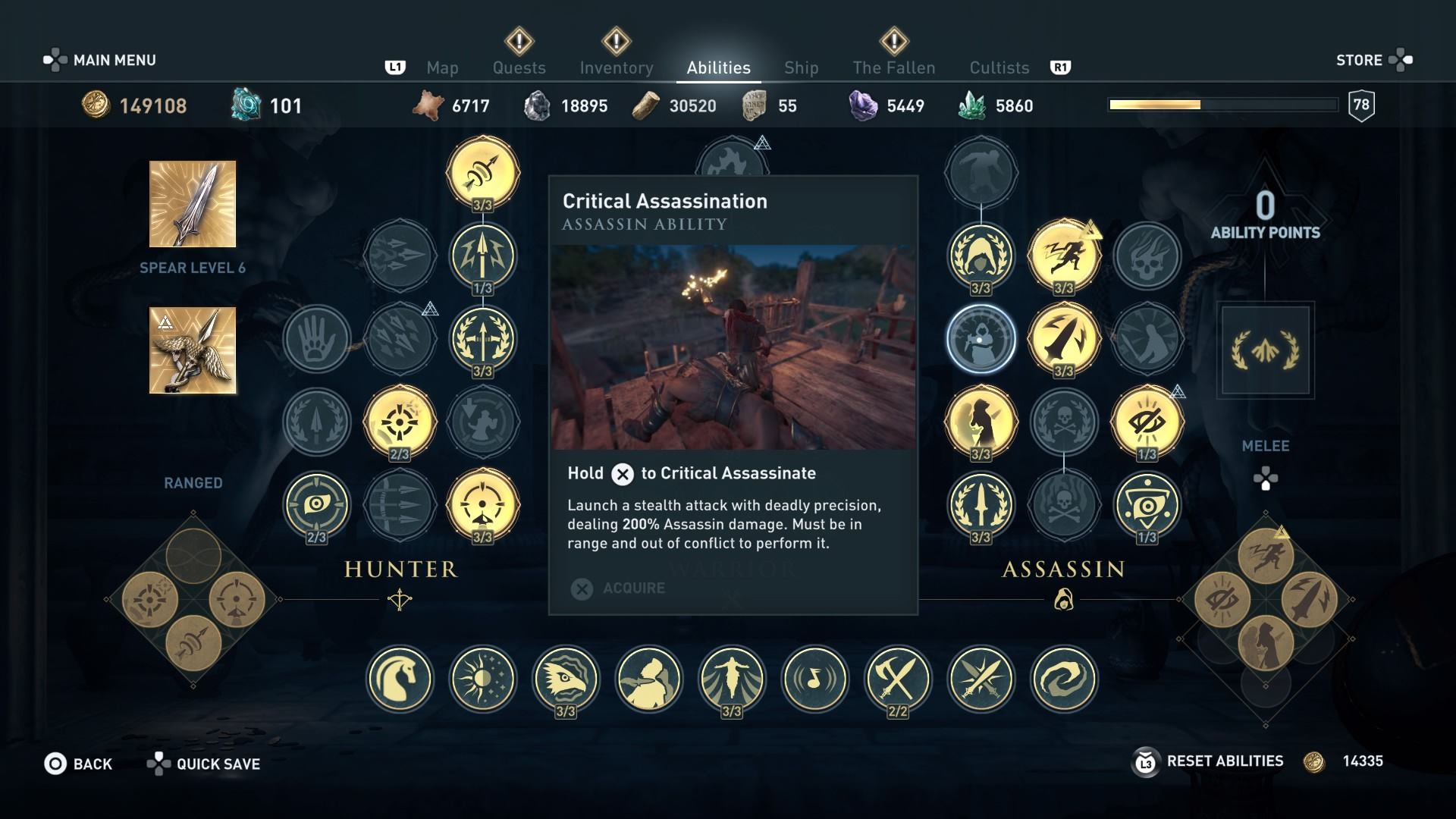 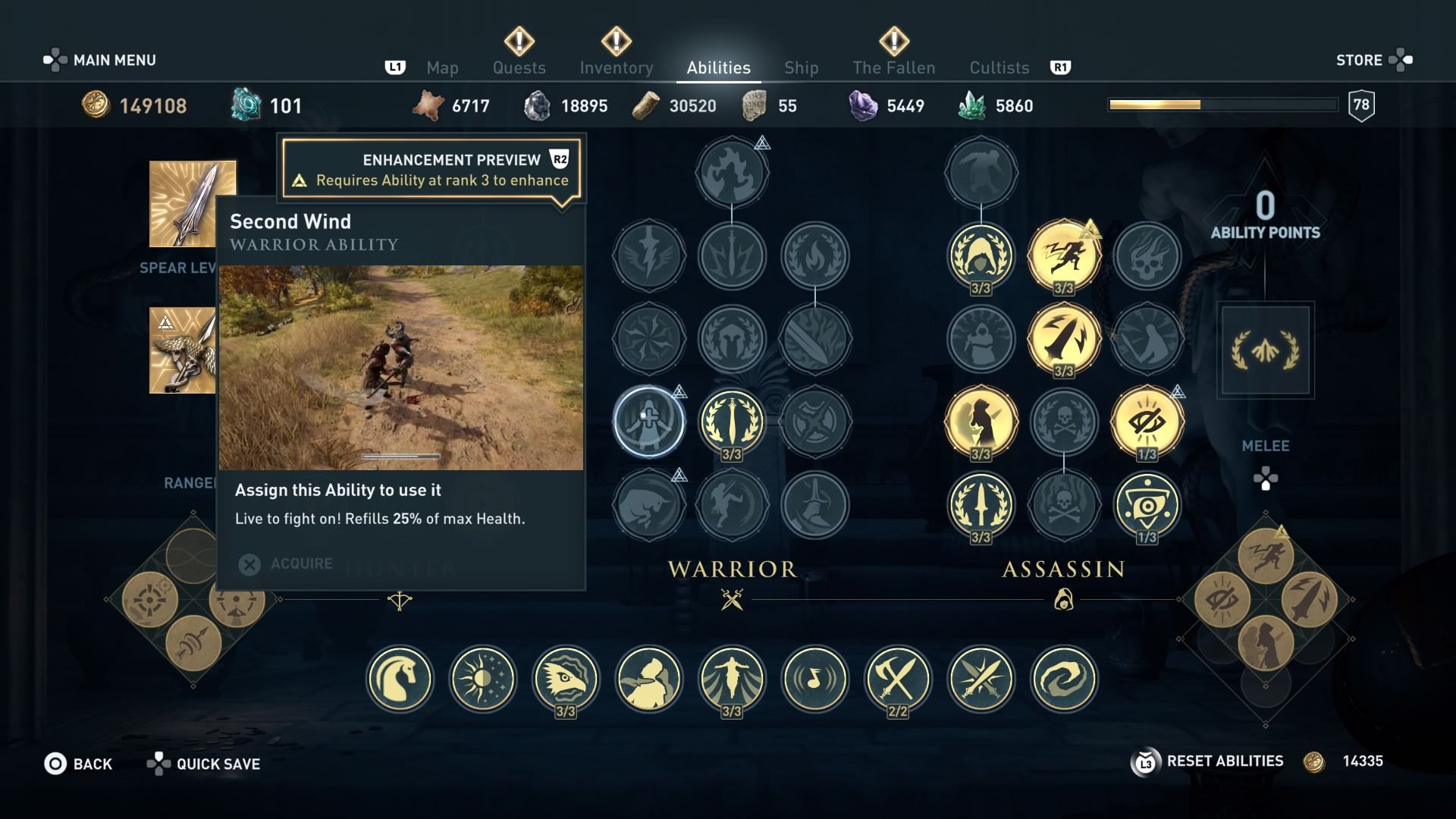 Second Wind allows you to automatically regain health upon activating it. This ability is the most well-rounded since it is used in almost every build. Considering Odyssey doesn’t have any sort of health-packs, Second Wind is an absolute must-have.

You’ll get the most use out of it during Conquest and Boss Battles. Since these bosses hit hard, you’ll be thankful you have a quick pick-me-up when you get bashed out of nowhere by a boss’s strike. 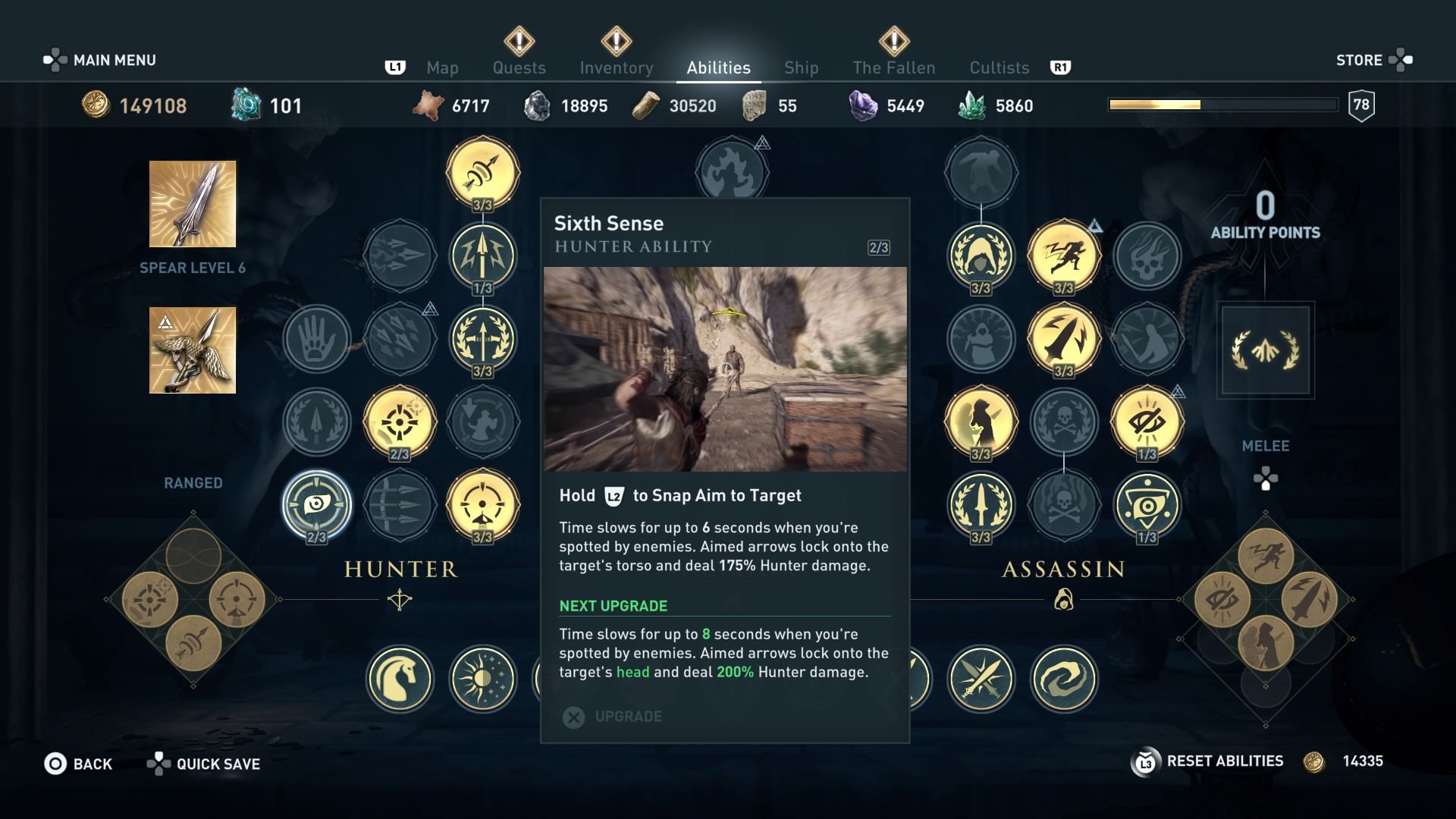 Sixth Sense gives you an 8-second window of time to react upon getting caught by a guard. You also get a 200% Hunter damage bonus during this 8 seconds. This is great for Hunter players who prefer to play the game as sneakily as possible. While this is technically a Hunter ability, it is practical for all other forms of attack. An enemy may spot you while sneaking, but you can easily run up to them and assassinate them within that 8 seconds. 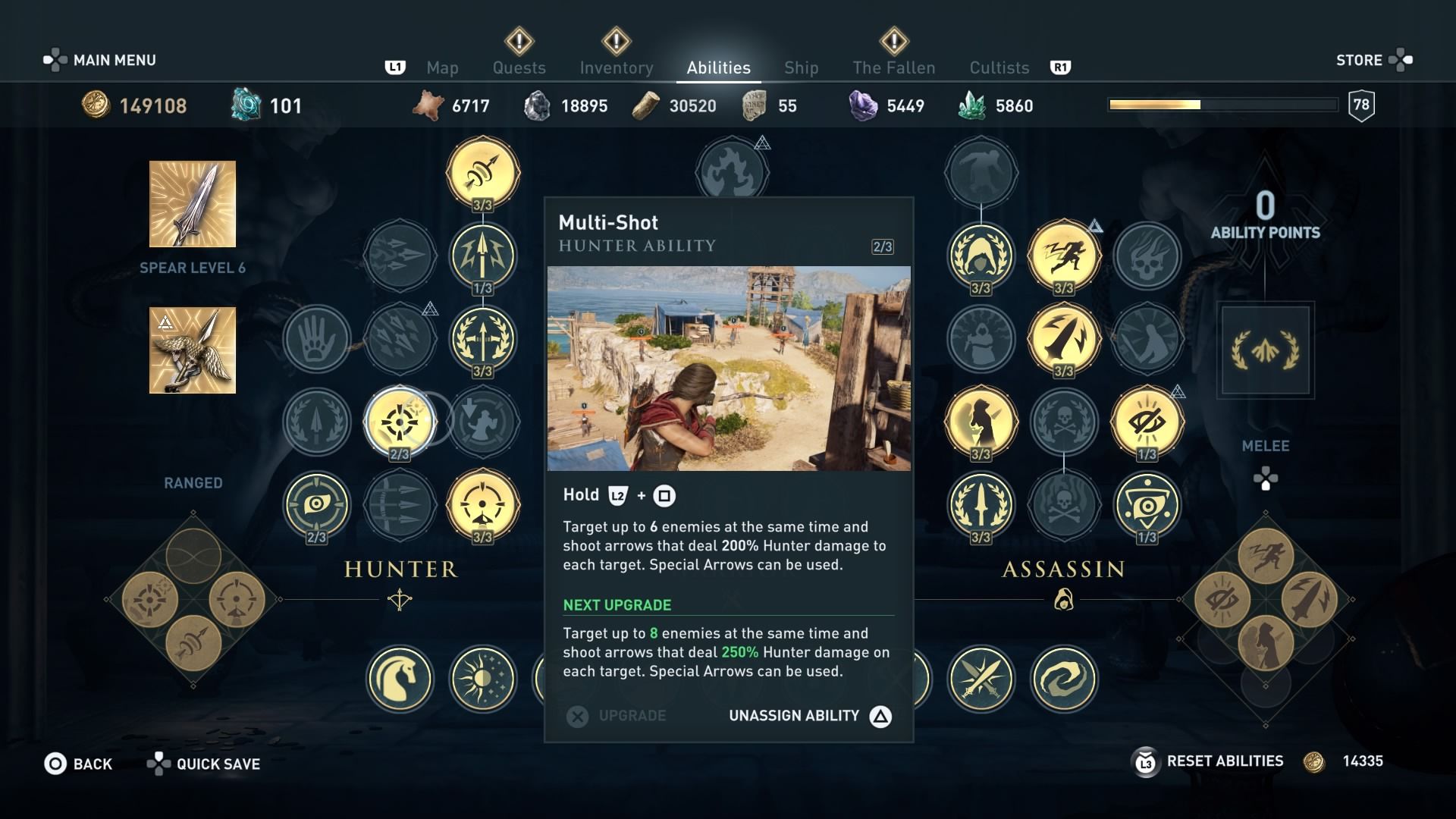 No one likes being swarmed in any video game. Multi-Shot is the prominent ability for managing crowd control. This lets you shoot up to 8 enemies, with each arrow dealing 250% Hunter damage. Whether you’re in a conquest battle or you get caught in the middle of a fort, this skill will let you pick off a number of enemies at a time. If you have a high CRIT chance in your build, this skill can actually be stupidly overpowered, almost to the point of being broken. The added bonus is that this ability is so easy to use, as you all need to do is aim and shoot at a group of enemies. Multi-Shot does the rest of the work. 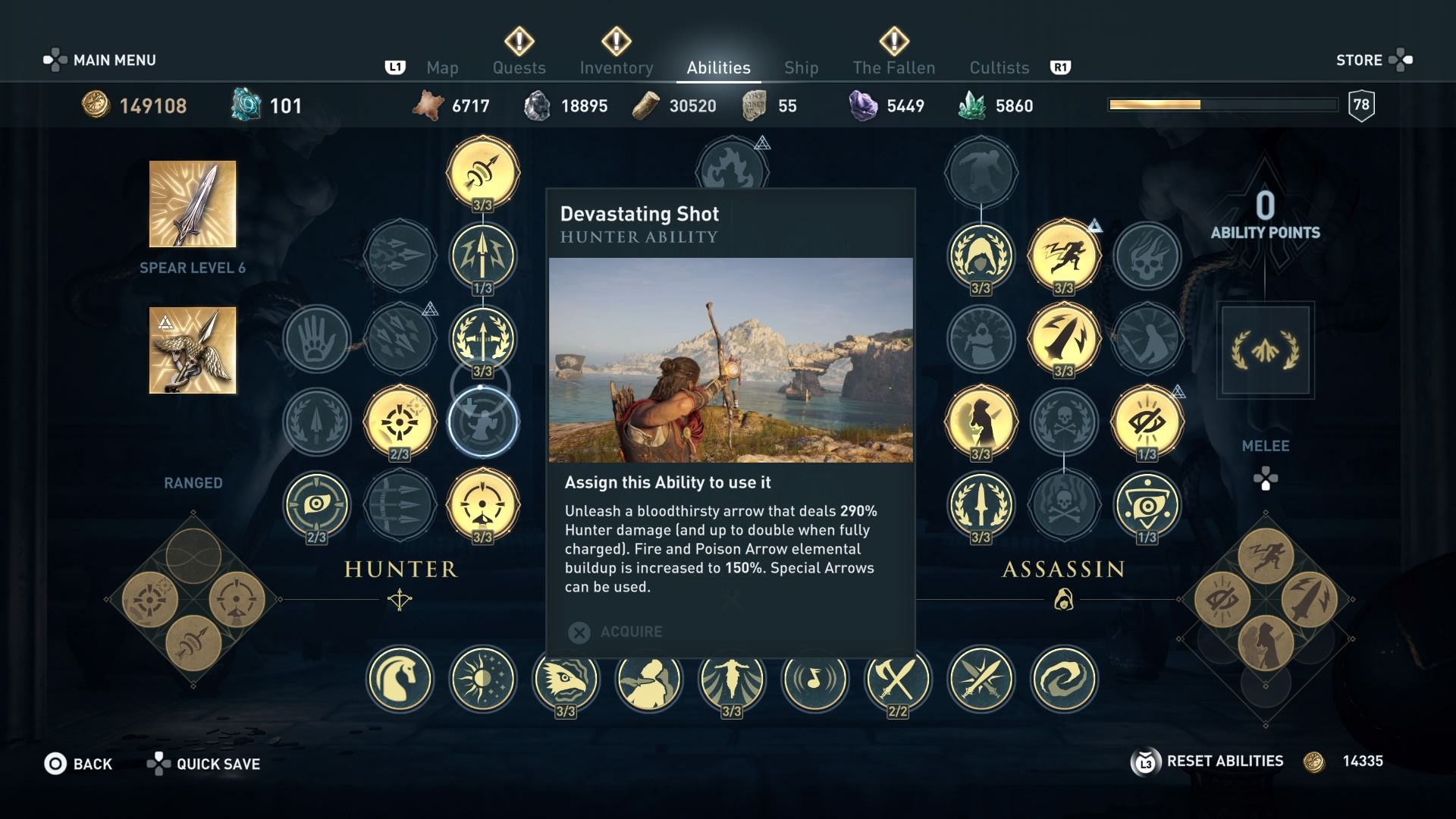 This ability is great for just about any situation. Elite enemies and bosses are usually the perfect targets for Devastating Shot. Also, at 3 skill points, this ability will make basic enemies go flying back. If you see an enemy on the edge of a cliff or wall, feel free to shoot Devastating Arrow. The results are quite hilarious. 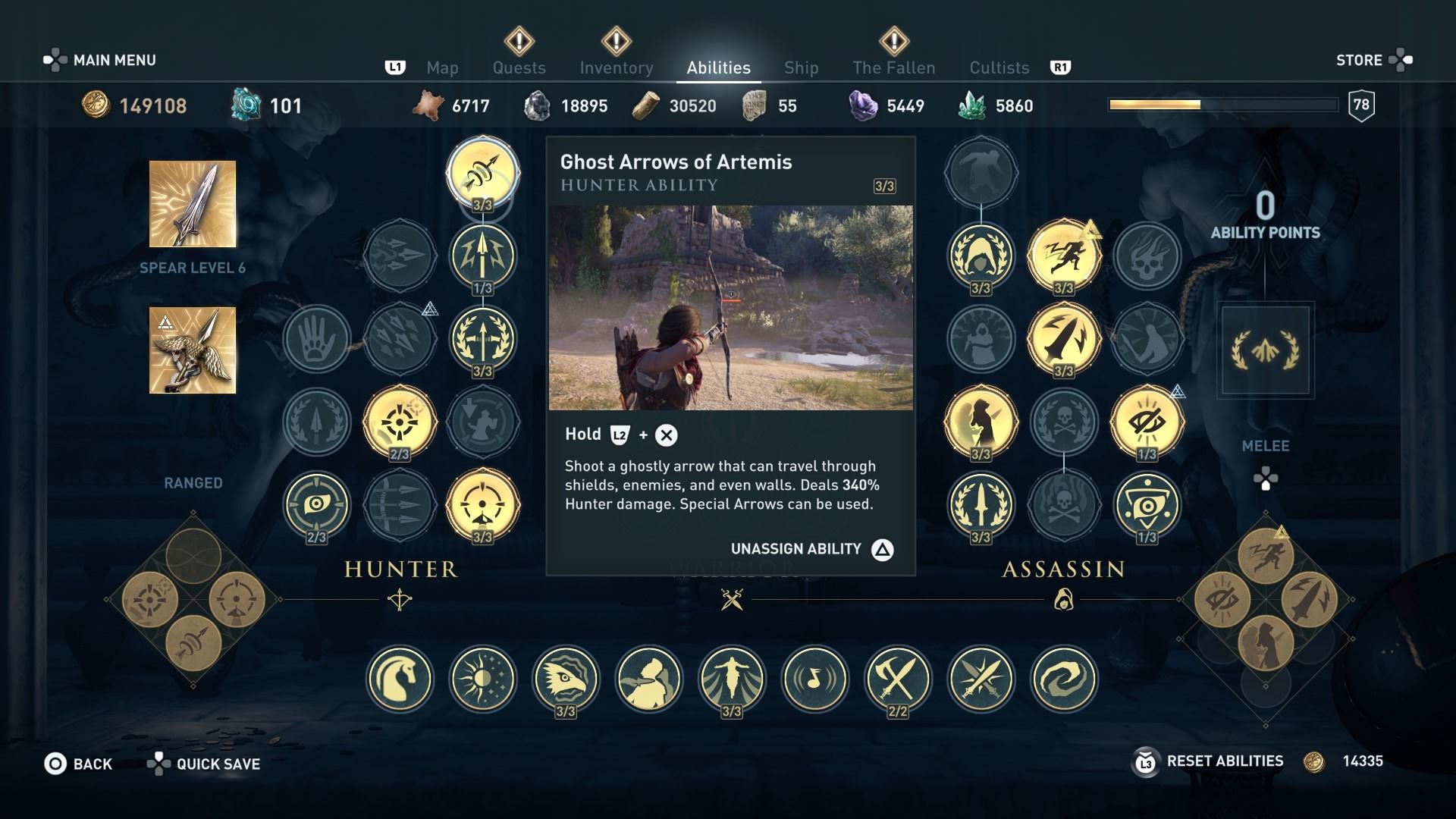 This ability is just silly, for all the right reasons. This allows you to shoot a “ghost-arrow” that can go through just about anything, dealing up to 260% Hunter damage. When we say anything, we mean literally anything. For instance, this arrow can travel through a mountain if you have an enemy marked. Stealth is always the best course when using this ability. The best part is that you can stay completely hidden after using it since enemies are not likely to know your location. You can even use this ability against Medusa by shooting through the pillars when you’re avoiding her beam of light. 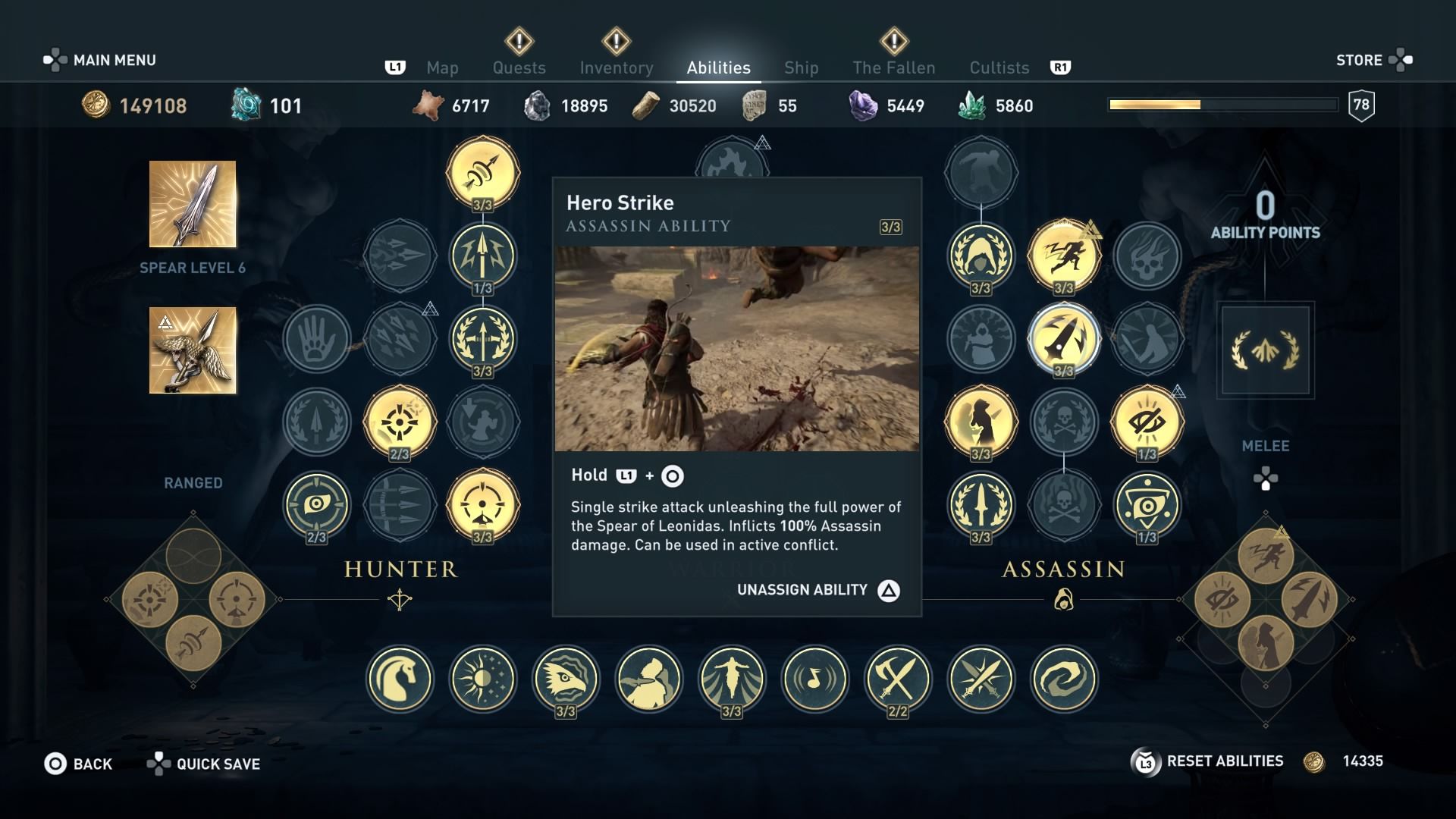 While it is technically an Assassin skill, Hero Strike is great for Warrior melee builds. When activating this ability, you will sweep the enemy, and then bring your dagger into them as they go down. It’s best for using against Elite enemies since it does 100% Assassin damage on the enemy. Considering Assassin damage is always absurdly high, you’d be crazy not to use this skill while in combat. You can even use this on giant bosses. It won’t actually do the sweep animation (although sweeping the Cyclops would be humorous), but it will get the full amount of Assassin damage regardless. 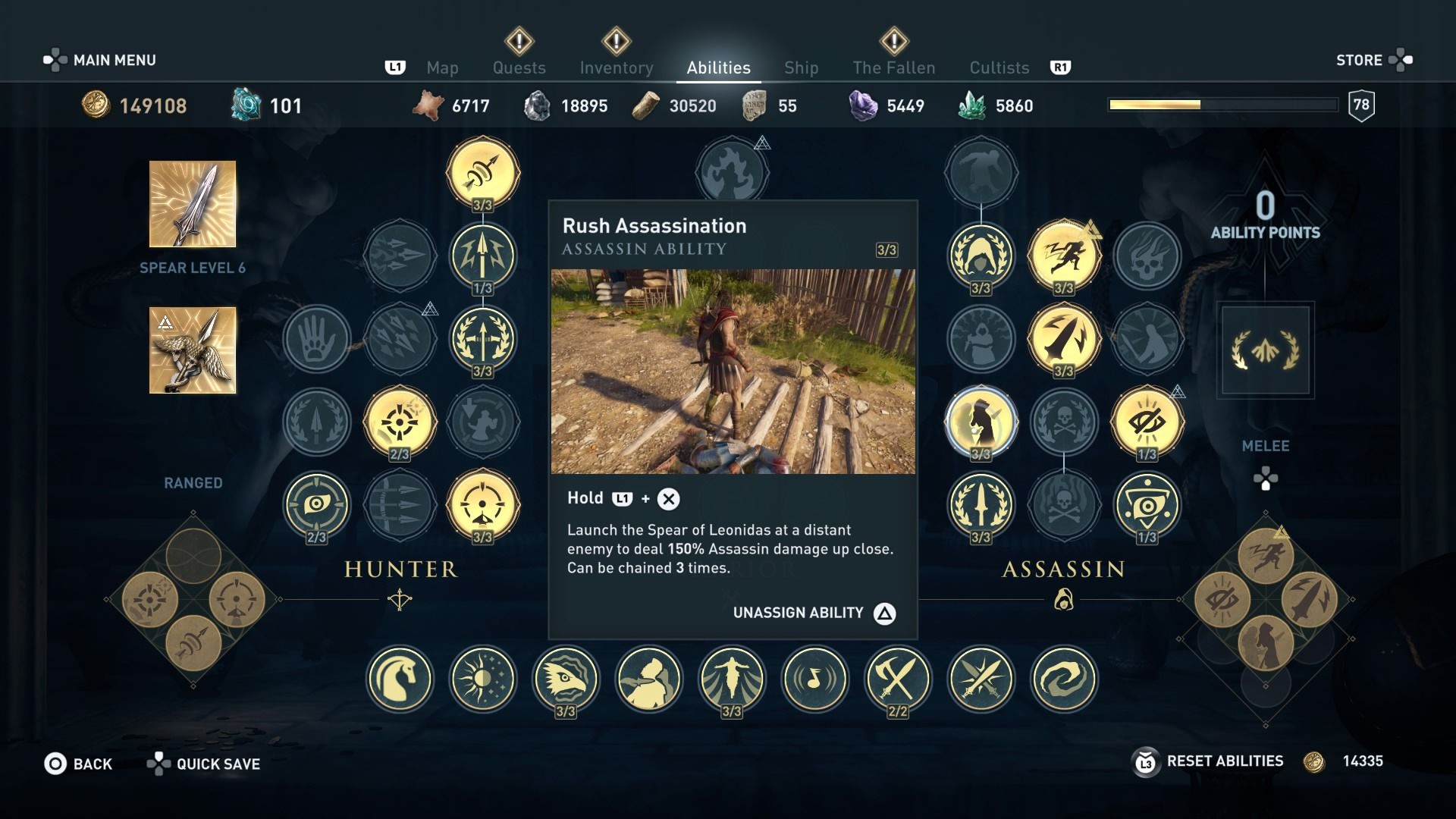 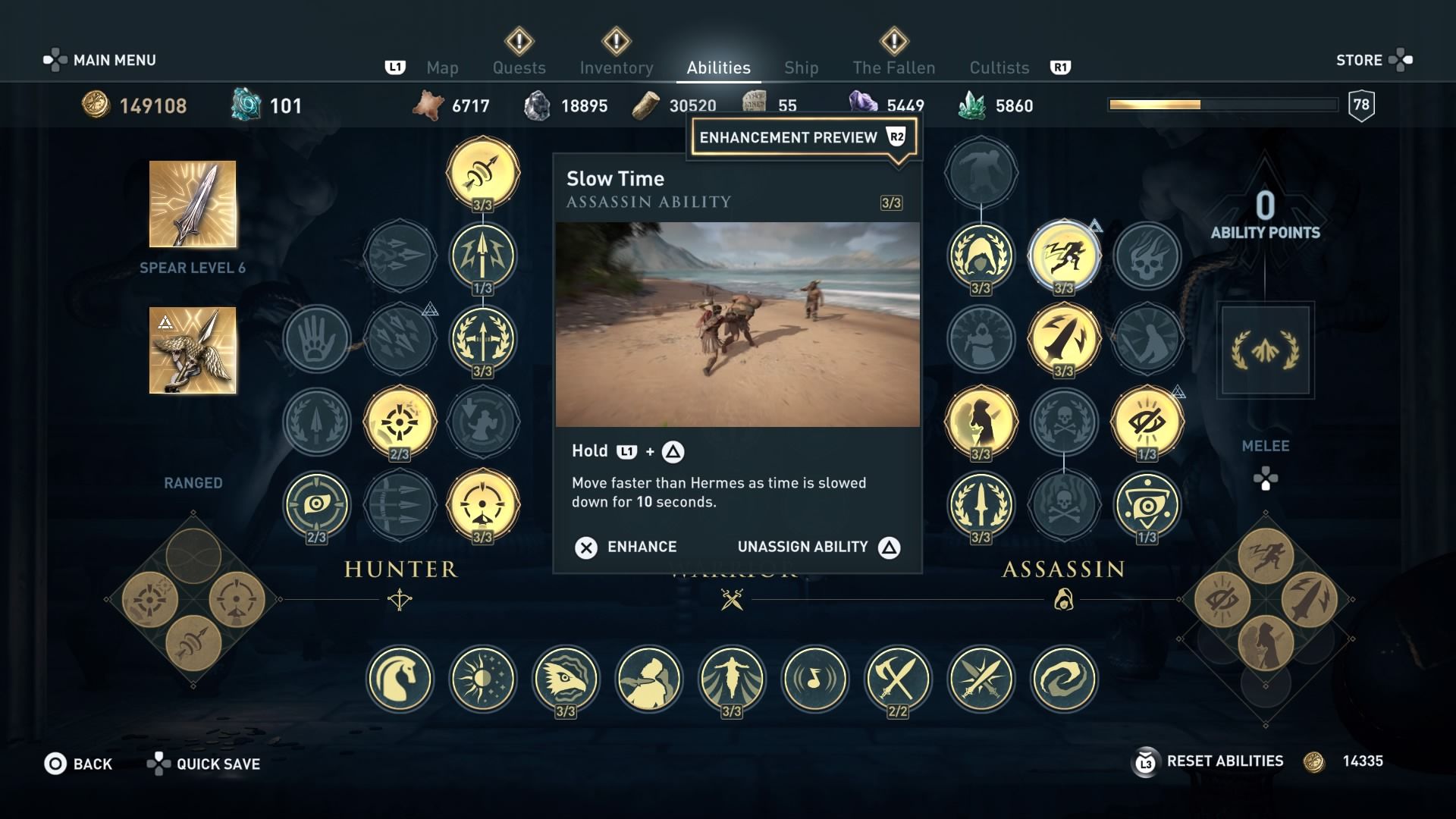 Slow Time is everyone’s favorite ability for all builds. Who doesn’t want to slow down time in a fast-paced game? Many use Slow Time against some of the more difficult bosses in Odyssey. Bosses like the Minotaur and Medusa are tough due to their quick attacks. Slow Time makes these boss fights way easier since you’ll be able to get a good amount of hits on them before they can return the favor. Not only will getting many hits to do some damage, but it’s also a more efficient way to build up Adrenaline. It’s especially effective if you don’t have a high armor rating.

Resident Evil 3: How Long Does It Take...