Tucked away in a tiny corner at San Diego Comic-Con, past all the big flashy photo-ops and eye-catching displays, behind the giveaways, celebrity signings, and the four-hour line for the convention-exclusive Funko Pop, right next to the nacho cart, is a little booth called Mark's Non-Sports Cards. While the name is entirely accurate, it doesn't quite capture how bizarre and beautiful Mark's collection of vintage trading cards really is. Rather than Pokemon or Yu-Gi-Oh, Mark stocks a wide assortment of licensed Topps trading cards based on old movies and TV shows. Apparently, Topps used to make trading cards out of literally anything. Men in Black, Howard the Duck, Battlefield Earth, Gilligan's Island, Hook, 21 Jump Street — you name it, Topps has probably made trading cards of it, and Mark's got them all.

I stood in awe of Mark's collection for a solid ten minutes before the man himself wandered over and asked if I needed any help. "I just can't believe you have all of these," I said. "Where did you find them?" Mark's eyes got a little glassy as he stared off into the middle distance. "It took a very long time," he said.

There are a lot of amazing things you can find at Comic-Con, but Mark's Non-Sports Cards has the most unique and exclusive selection of any booth there. Where else are you going to find ten packs of the official The Osbournes Premium Trading Cards, with a chance to find an actual Sharon Osbourne autograph?

I bought 5 random packs for $30. As Topps was originally a chewing gum company, almost all of them came with a stick of gum, and some of them have been sitting on a shelf for more than 40 years. Here's is my ranking of the five packs of weird trading cards I bought from Mark's Non-Sports Cards, based on how good the gum tastes. 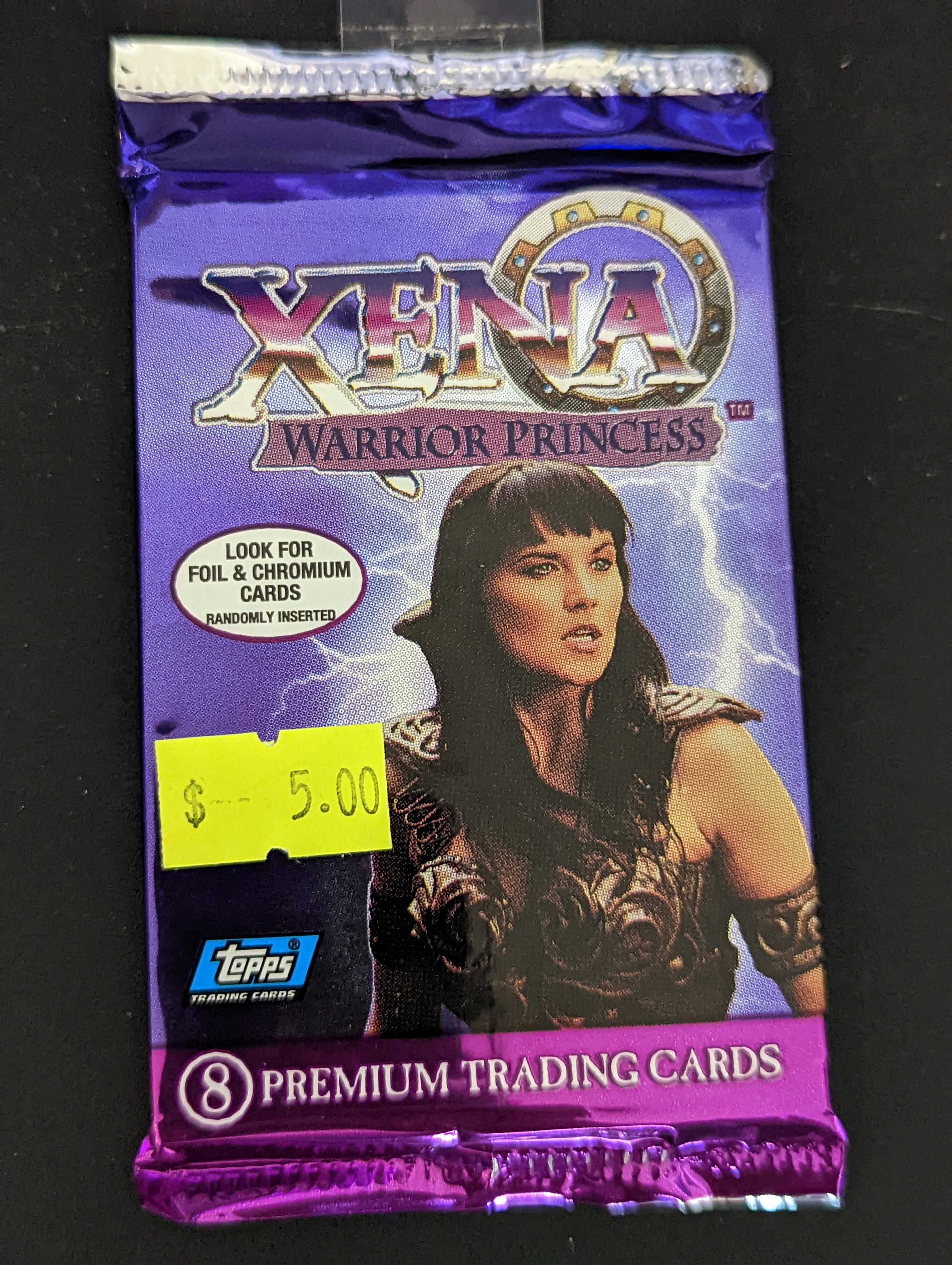 Xena: Warrior Princess aired 134 episode from 1995 to 2001 and is still a beloved cult classic today. Topps released three series of Xena trading cards between 1998 and 1999. My Series 1 pack includes eight cards and the possibility of finding foil and "chromium" versions. What I like about this booster is that tells you you're exact odds of finding a chase card. The back label says the set contains 72 cards and each pack has a 1:12 chance of finding a foil, and a 1:36 chance of finding a chromium, with no guaranteed number of special insert cards per box. Let's see how well I did. 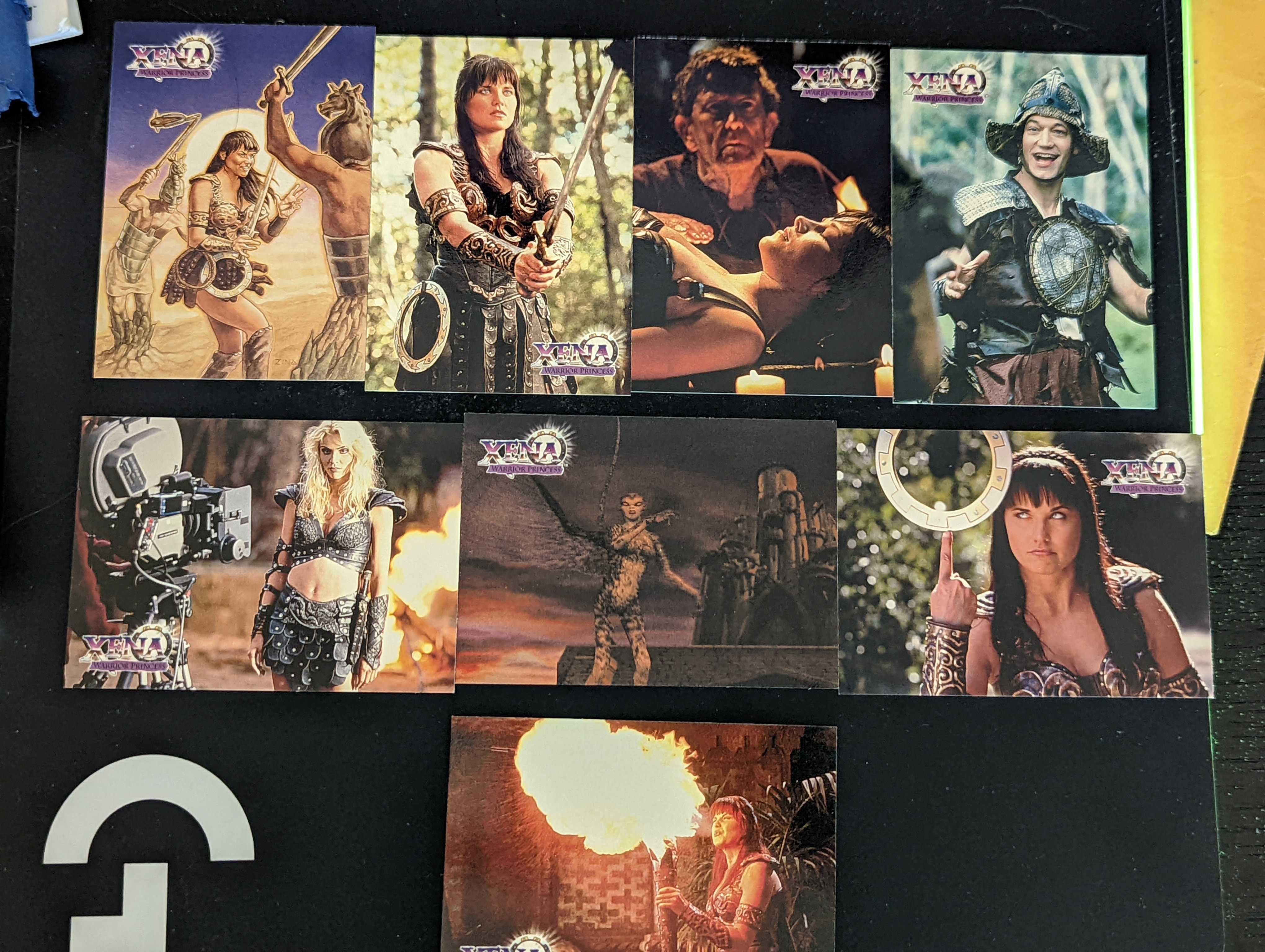 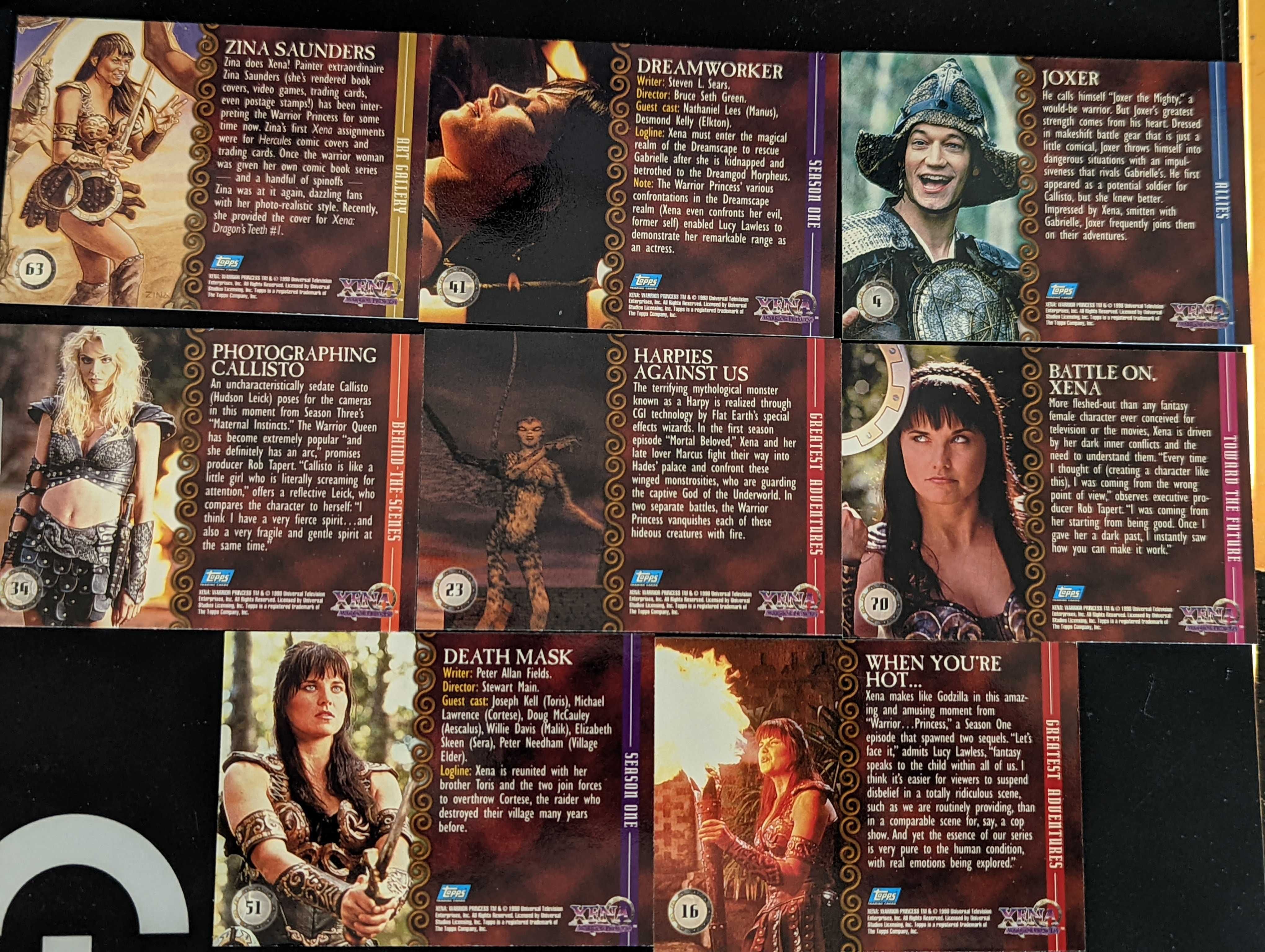 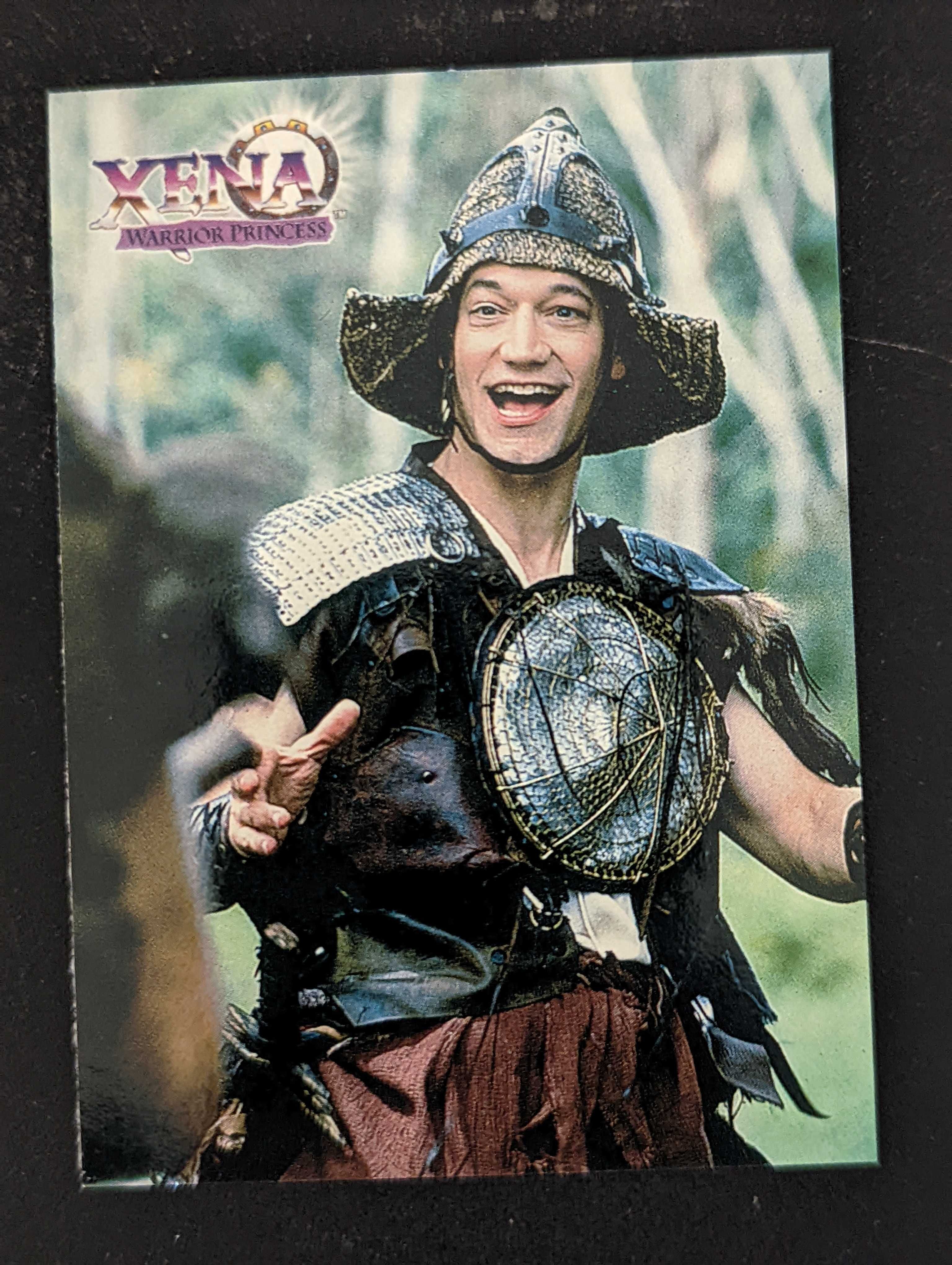 While I whiffed on the holographic, I was impressed by the variety in this pack. Not only are there the traditional still shots from episodes, but I also got art from one of the Xena comic books. The back of each card has a very detailed description of the episodes and characters featured, and I got one featuring Ted Raimi's character Joxer, which is better than any holographic. No gum, unfortunately, so it ranks last. 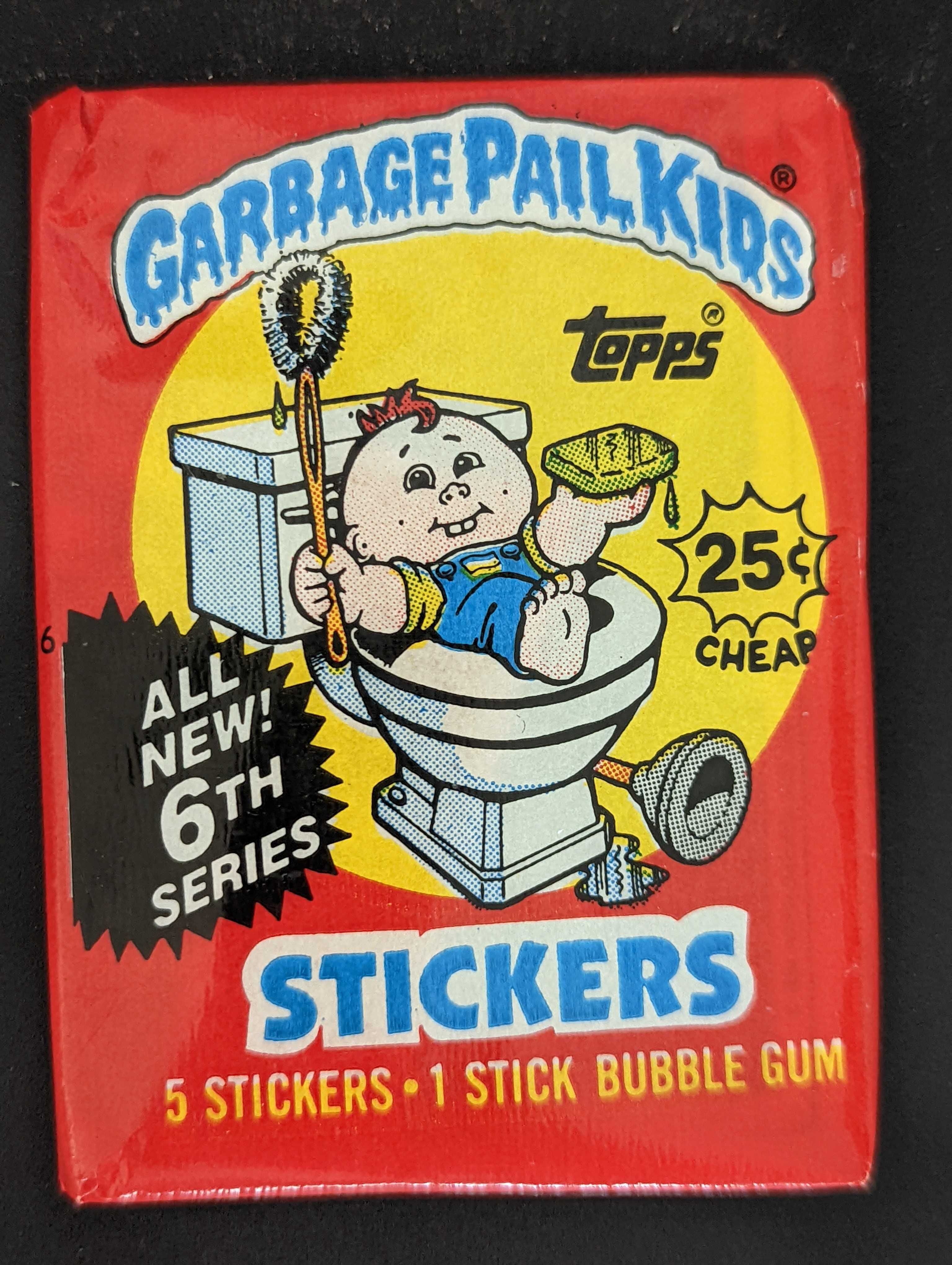 Most people are probably aware of the Garbage Pail Kids, as it's one of the most successful trading card franchises of all time. Topps printed the original Garbage Pail Kids series from 1985-1988, with each pack including one stick of gum and five stickers. Series 1 packs have sold on eBay recently for as much as $5000, while the most valuable kid, Nasty Nick, is valued at over $7,500. Here's my 1986 Series 6 pack, the stickers, and the gum. 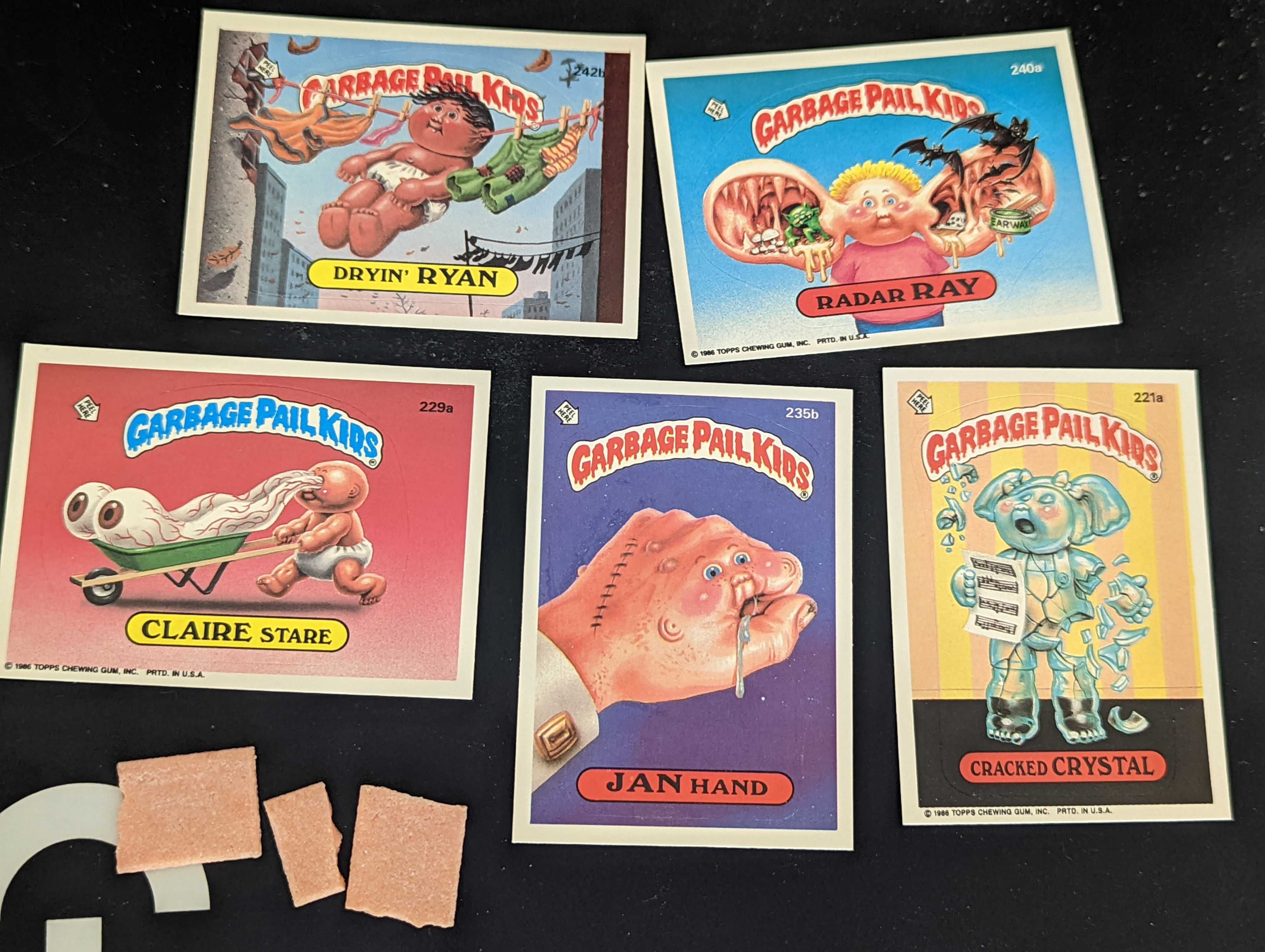 Right off the bat, I have a strong affinity for Claire Stare, a baby that carts around her gigantic eyeballs in a wheelbarrow, but all five of the kids are spectacular. The gum was loose inside the pack and I imagine it's probably absorbed a lot of ink and chemicals from the stickers over the last 36 years. It instantly turned into dust in my mouth and it tasted like a cigarette butt. Overall a horrible experience. 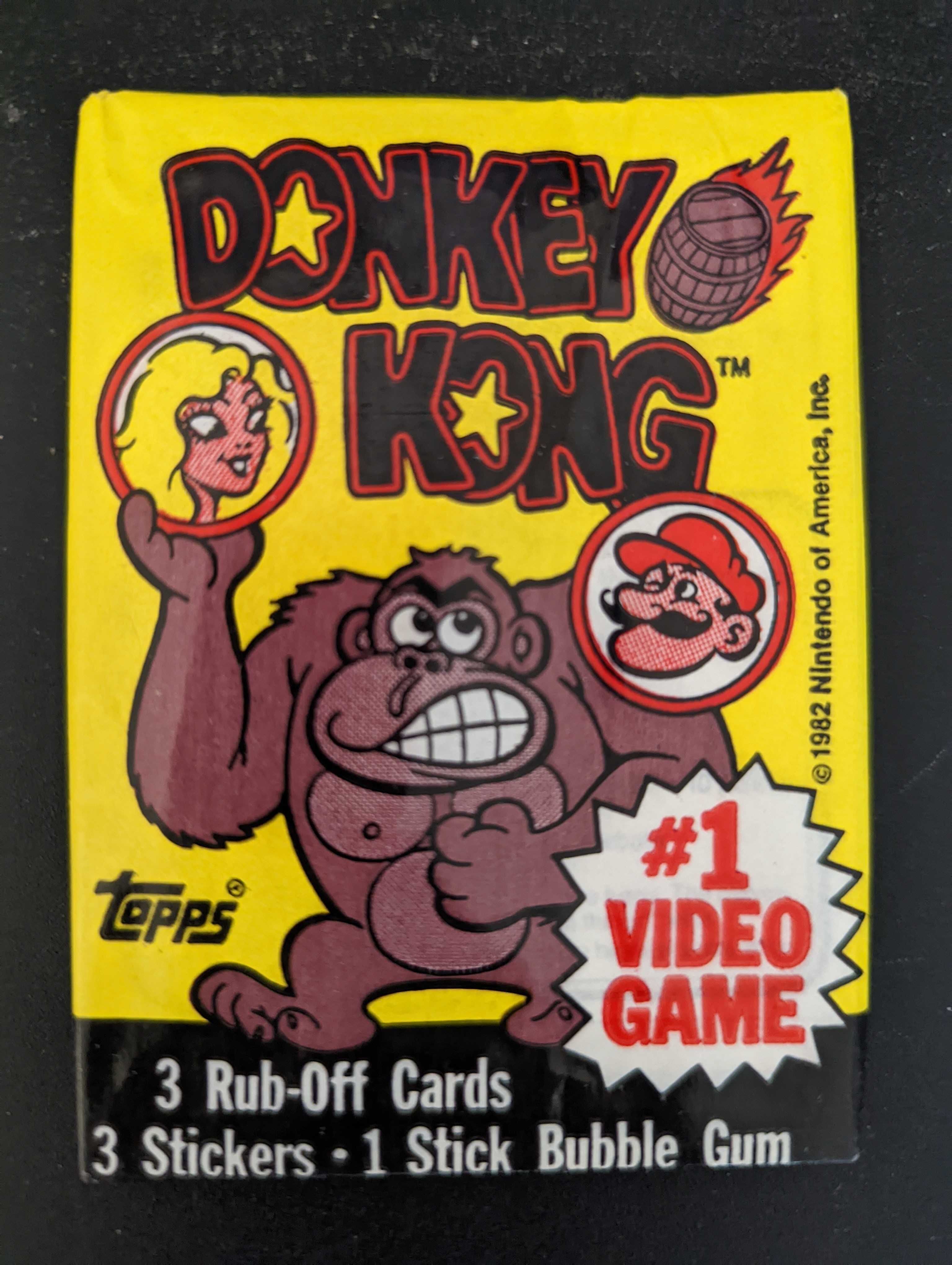 Topps 1982 Donkey Kong trading cards were a must-buy for me. The pack includes not only stickers and gum, but also "rub-off" cards, which Mark explained to me was a scratch-off game based on the original arcade version of Donkey Kong. This is some iconic gaming memorabilia, and for only $7, it was a steal. The back of the pack listed the ingredients of the chewing gum, which includes a compound called BHT to maintain freshness. We'll see about that. 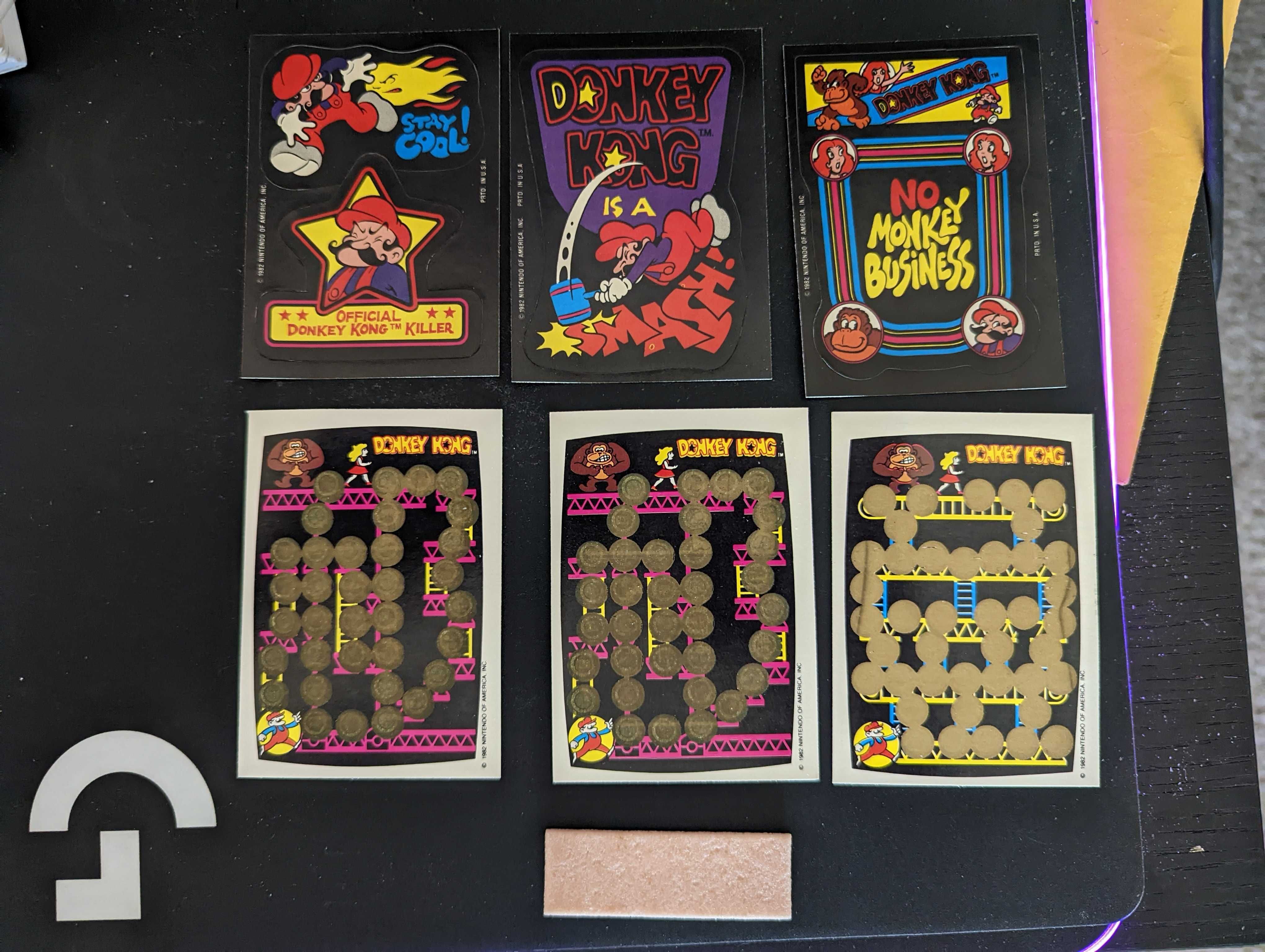 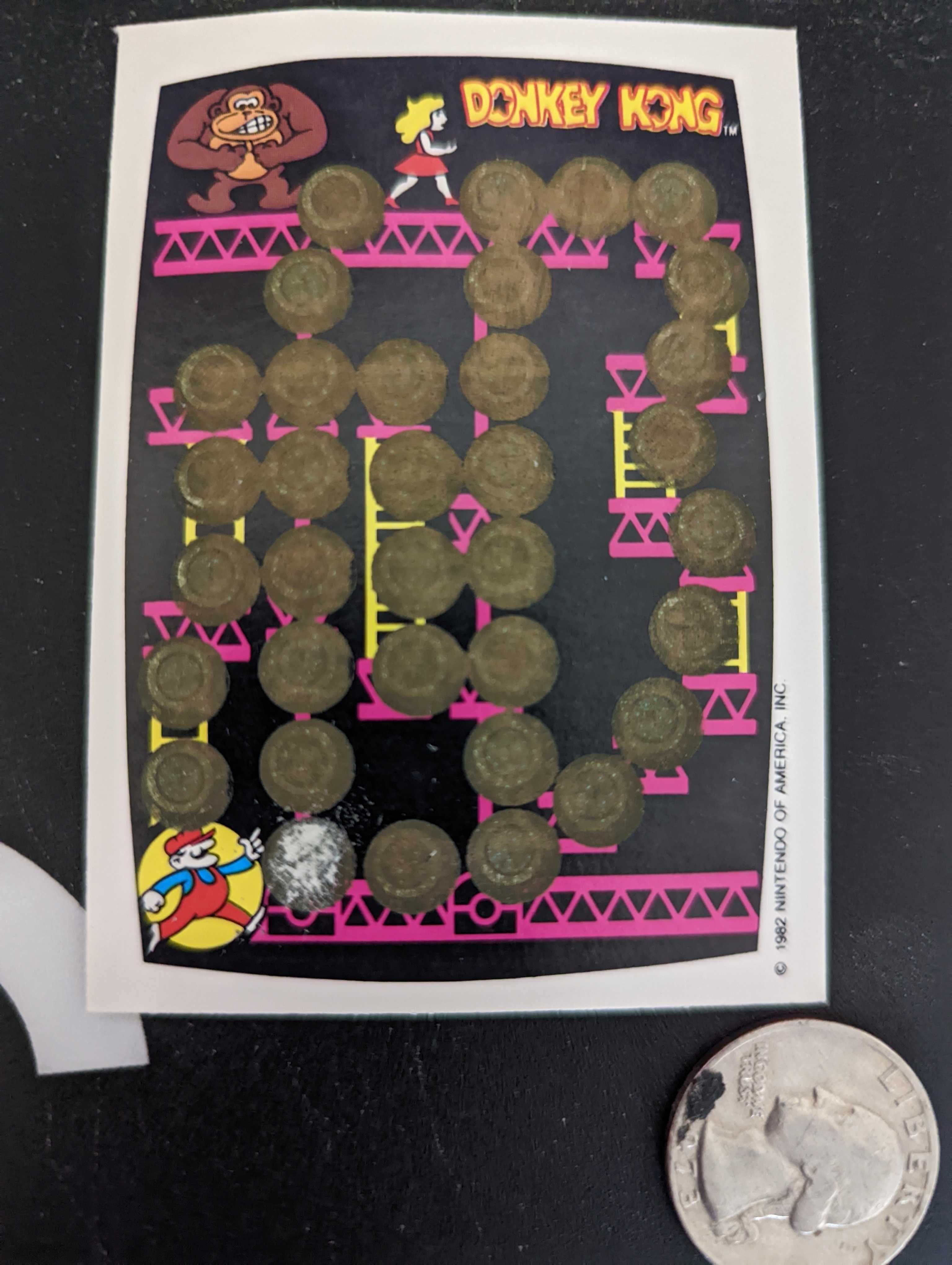 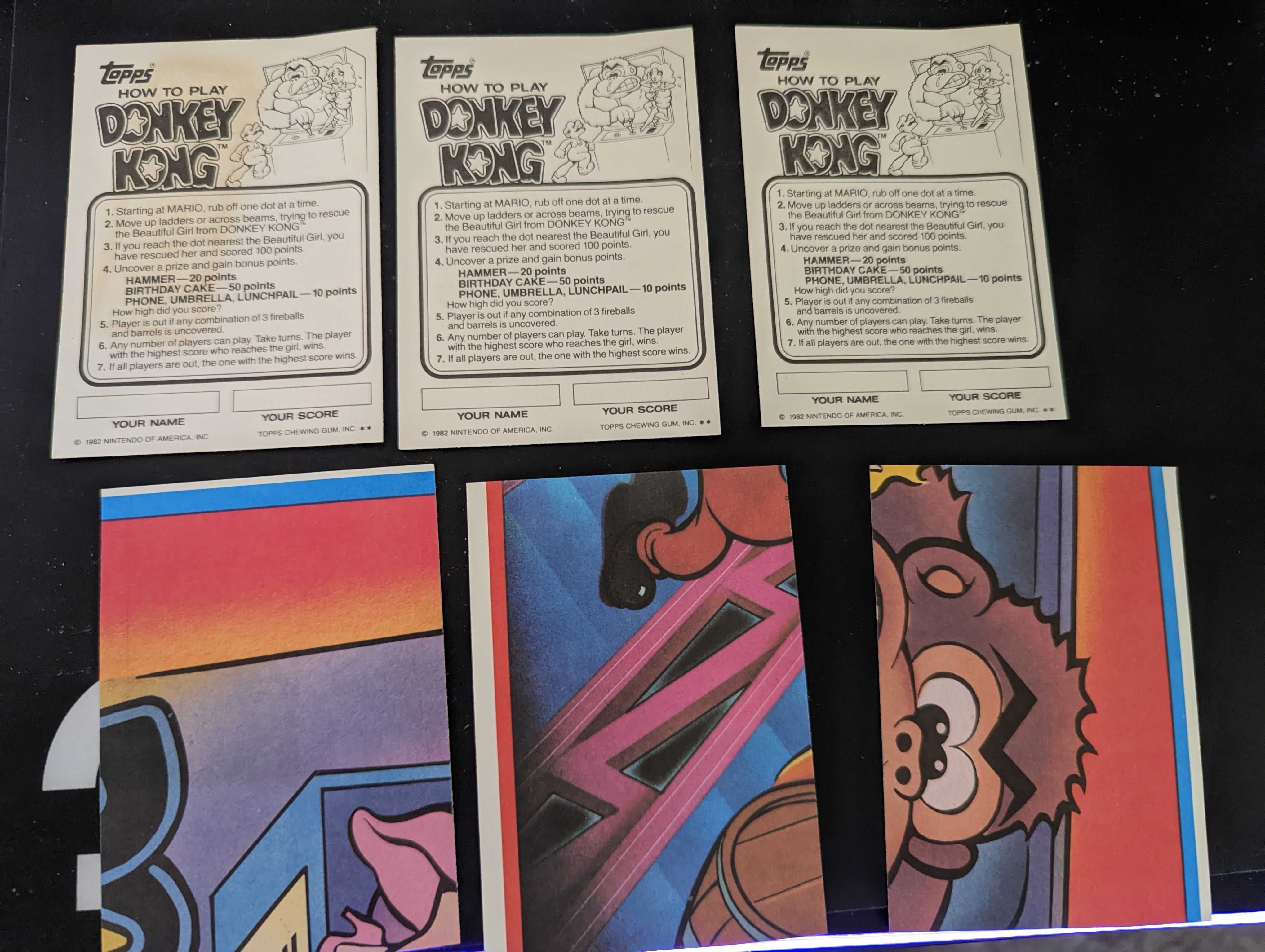 The stickers are everything I could have hoped for. I'm especially fond of the angry-looking Mario who is described as the "Official Donkey Kong Killer". The rules for the scratch-off cards are listed on the back of each one. The goal is to scratch off one dot at a time to create a path between Mario and Donkey Kong. If you scratch any combination of three fireballs or barrels you lose, but if you make it all the way to the end you score 100 points. You also score bonus points for uncovering hammers, birthday cakes, lunchpails, umbrellas, or telephones, for some reason. You're encouraged to play multiplayer by taking turns scratching and keeping score of your bonus points. Unfortunately, the scratching layer has been fused to the card and it's no longer possible to scratch without destroying the picture underneath too, but you can kind of make out what each space looks like underneath

As for the gum, this piece came out of the pack intact, but it had taken on some brown discoloration from the card it was stuck to. This time I decided to suck on it for a while before chewing it up to try to get more of the flavor out before it turned into sand. Unlike the Garbage Pail Kids gum, this one did have a vague bubblegum flavor. Unfortunately, it only took a few seconds before it started tasting like a spoon full of ashes from grandma's urn.

2. The Adventures Of Pinocchio 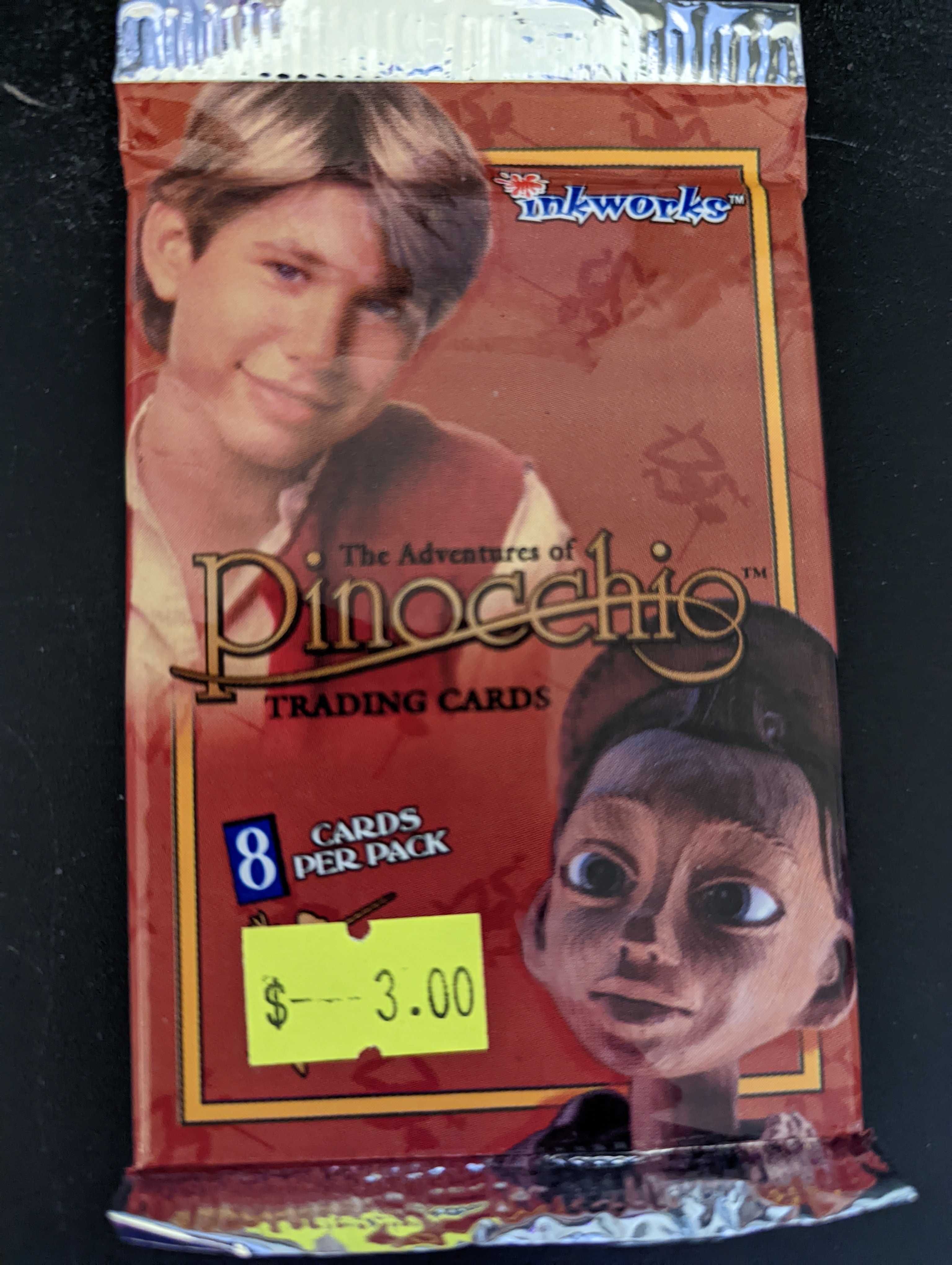 The Adventures of Pinocchio is a 1996 film starring Martin Landau, Rob Schneider, and Jonathan Taylor Thomas. It holds a 35% on Rotten Tomatoes and earned back less than half of its $25 million budget. The trading card set was produced by a company called Inkworks in 1996 and includes 90 cards. Each pack has eight cards with a random chance of finding a bonus one, and Inkworks promises to replace any damaged cards you might encounter, though considering the company went out of business in 2009, that might be difficult for me. Here's what I found inside. 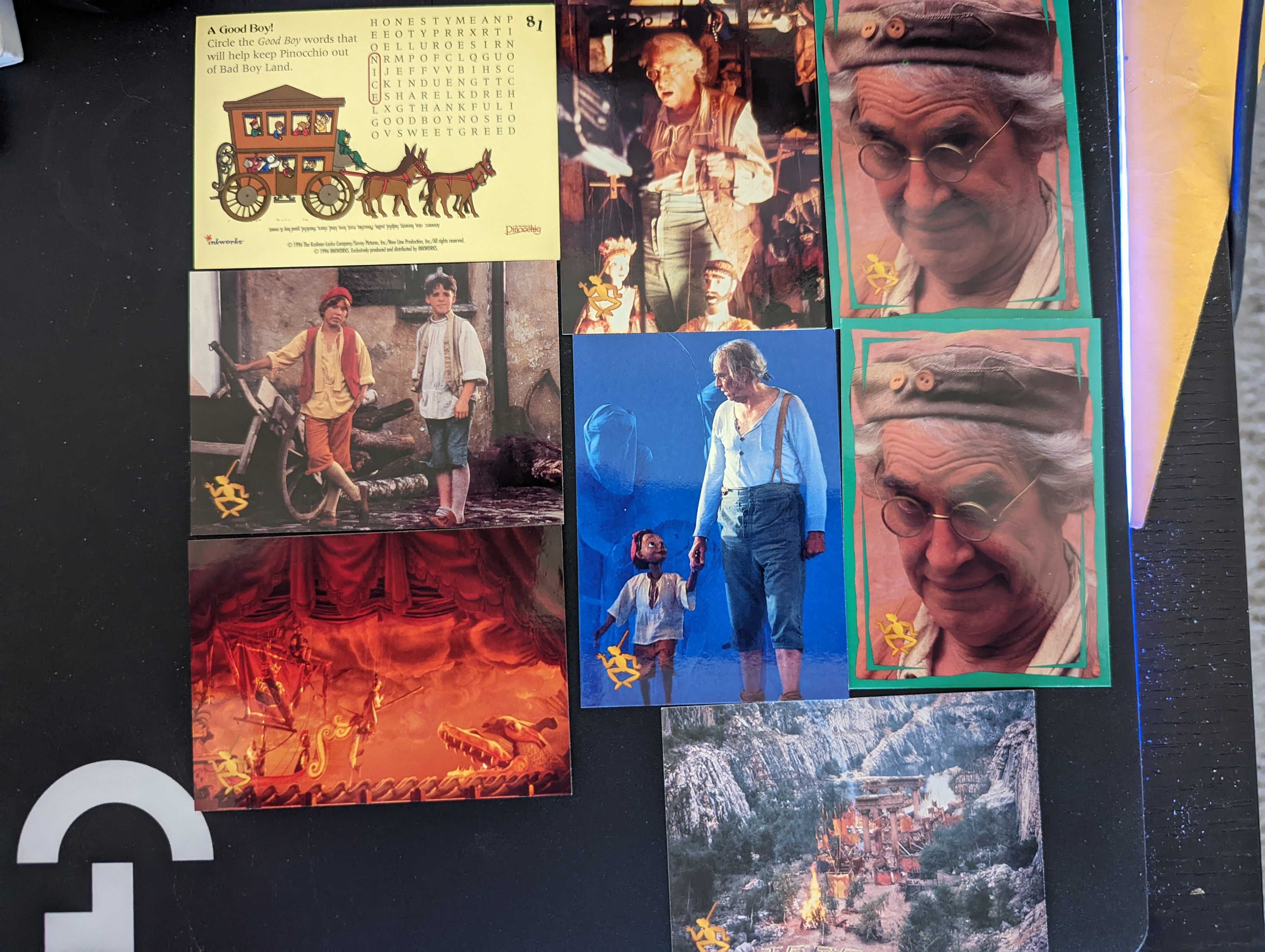 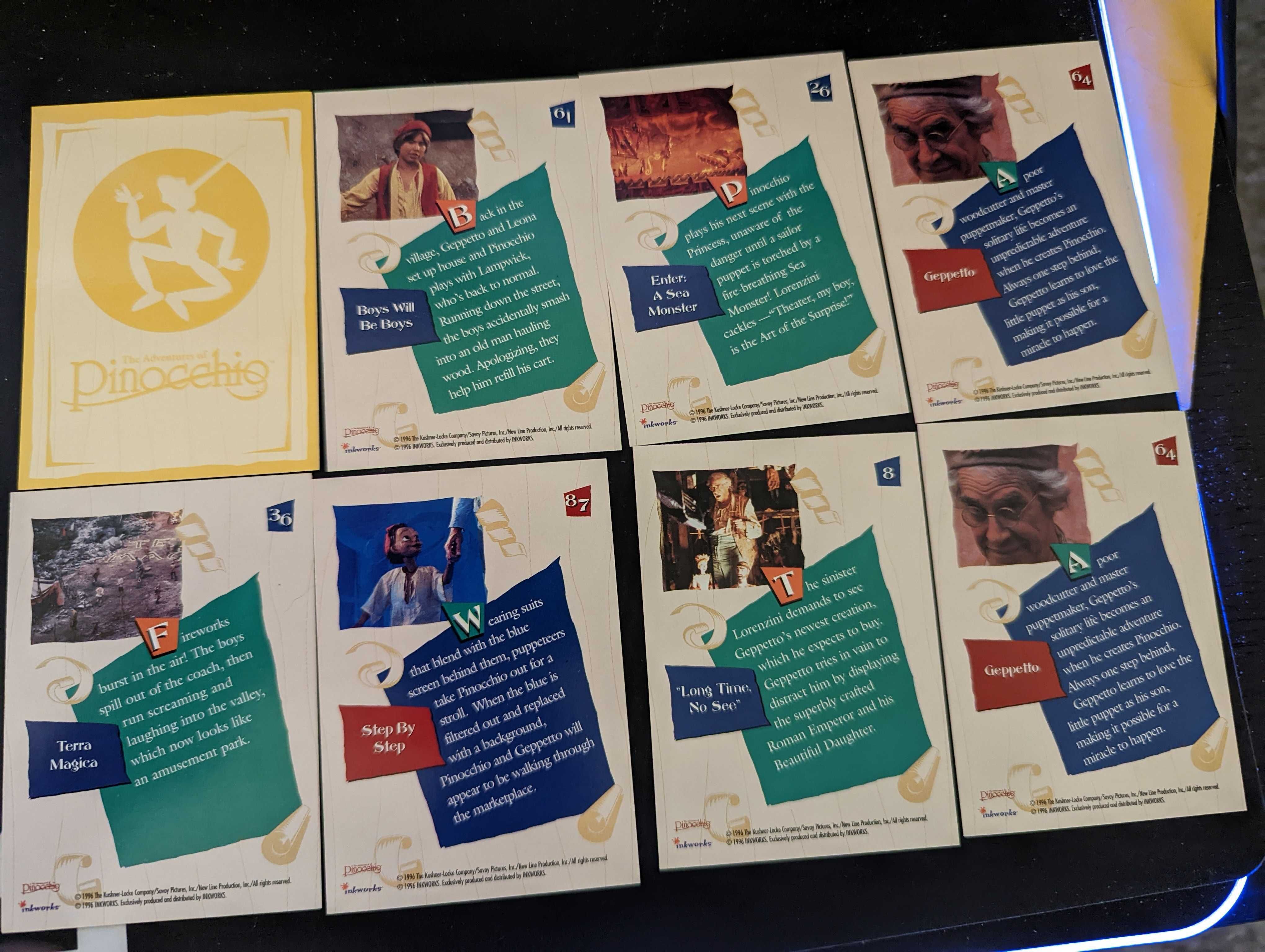 A double Gepetto and a crossword puzzle? What are the chances! This is one of my favorite packs of trading cards I've ever opened because it includes, in total, one Jonathan Taylor Thomas, four pictures of an old man, two inscrutable landscapes, and a crossword puzzle where all the answers are "nice," "helpful," and "good boy." This could have been my number one pick but it does come with any gum, and rules are rules. 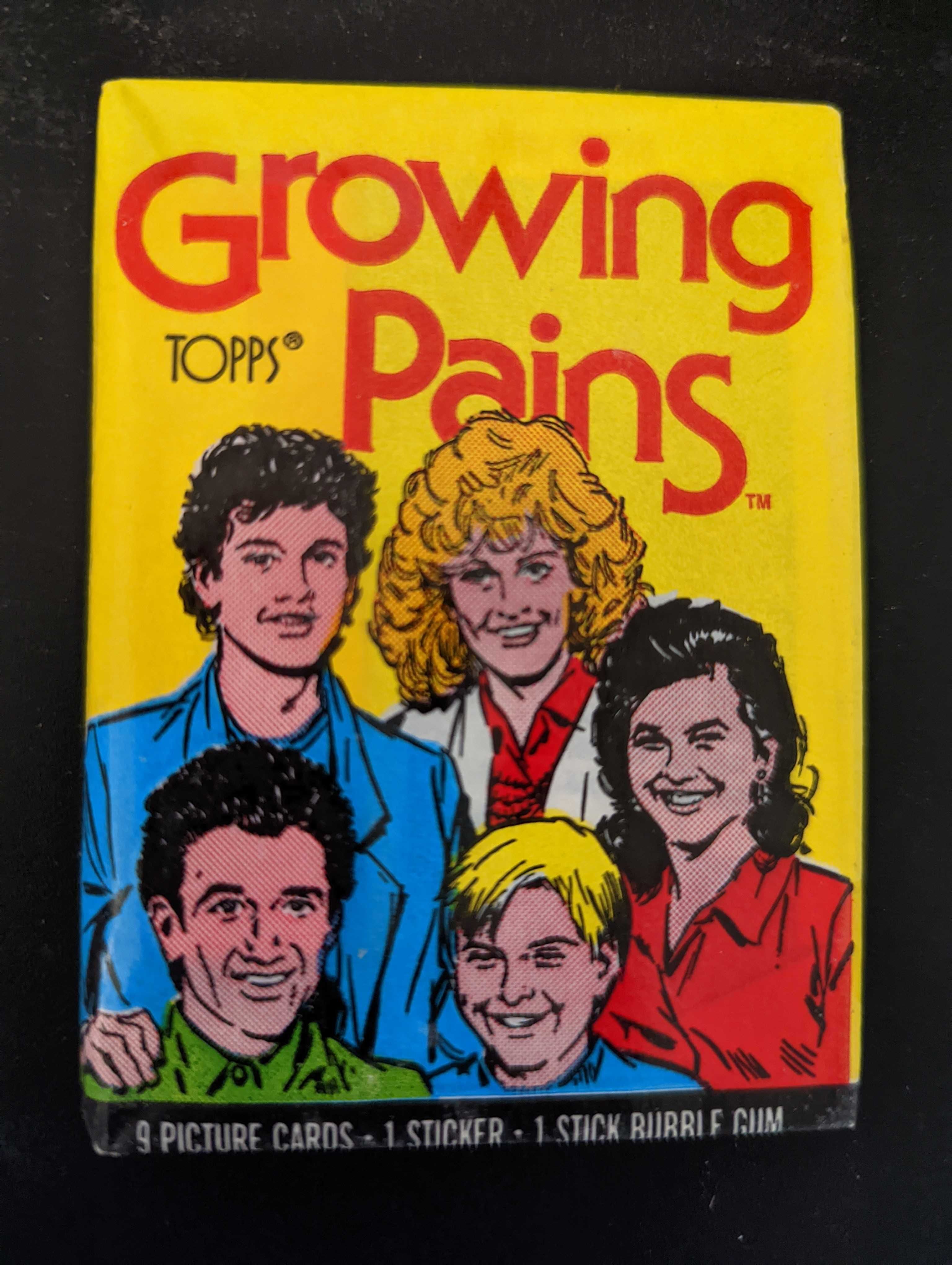 No show defines my childhood quite as much as Growing Pains, and I was delighted to find this 1998 Series 1 pack from Topps, which includes nine picture cards, one sticker, and a stick of bubble gum. There are no odds listed on the back this time, so I can only speculate as to what kind of gold might be inside. Will I find a holographic Kirk Cameron? A still from that episode where Ben Seaver dreamed that he learned karate and accidentally murdered his school bully? What if I found a picture of Maggie and Dr. Seaver smooching? Can you even imagine? Well, here's the haul. 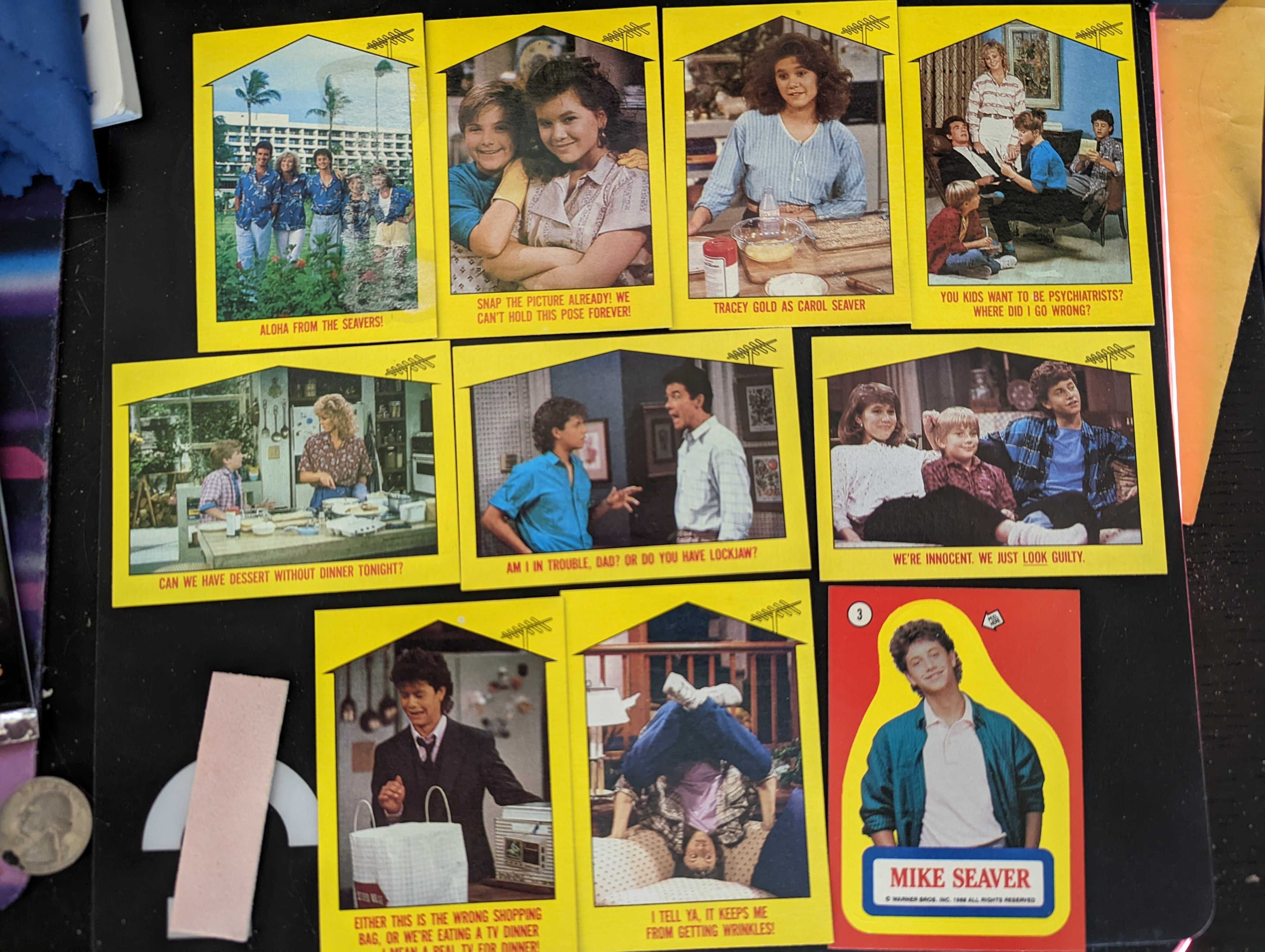 While the gum kind of ruined the "Aloha from the Seavers!" card it was stuck to, the Mike Seaver sticker more than makes up for the loss. I love these because each episode still was captioned with the improvisational energy of Bob Saget hosting America's Funniest Home Videos. My favorite one is a picture of Dr. Seaver scolding Mike that says "Am I in trouble Dad? Or do you have lockjaw?" because it implies Alan Thicke was just standing there mouth agape, when this is clearly just a screenshot of a conversation. I can't emphasize enough my delight that these are not quotes from the show, but rather someone's interpretation of what might be happening in each scene. The gum was awful, it made me sick, I don't care. Growing Pains trading cards take the number one spot. Show me that smile again, baby.