Red Dead Redemption 2 boasts a large open world to explore with a variety of strange NPCs to get acquainted with. They all add their own brand of “wild” to the wild west, but one of the strangest and creepiest of the bunch is the serial killer known as Edmund Lowry Jr.

The guy is the centerpiece to the American Dreams stranger mission, as he leaves extremely disturbing and gruesome murder scenes for Arthur Morgan or John Marston to find while uncovering pieces of a map that reveals Lowry’s location. The game is pretty vague when it comes to how you can find him, so we’ll shed some light on the situation for you!

How To Start The Mission

There are two different ways of stumbling upon the mission. The first is by talking to Valentine’s sheriff. This will reveal that several people have gone missing over the years and that there’s a reward on offer for the culprit.

The second is by just being lucky (or in this case unlucky) enough to stumble upon one of the locations of the bodies. Regardless of how the mission is started, prepare your stomach for some gruesome sights. 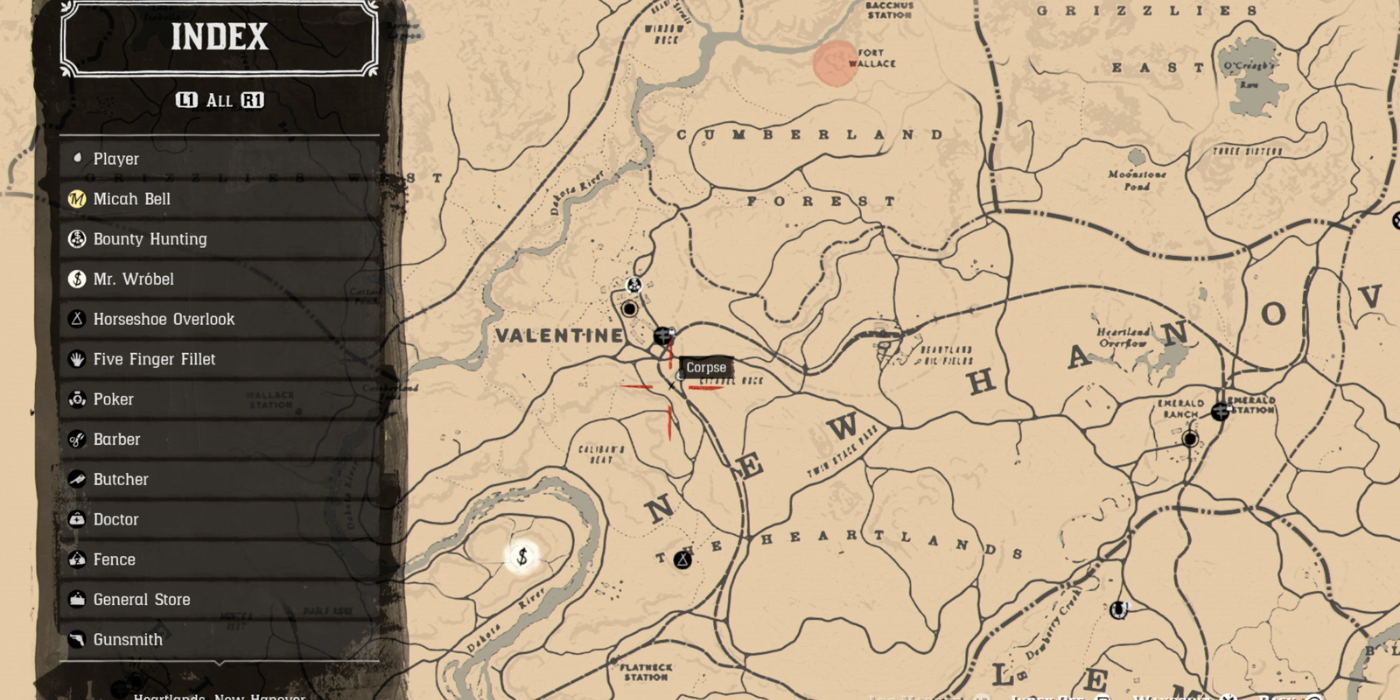 The first body is located almost directly south of Valentine along the train tracks leading into the town from the same direction. A blinking white marker will guide you to a spot under the bridge.

As you get closer, ominous music will play as you eventually reach a decaying human torso strung up on the bridge with its head missing. To the right of the body, you’ll see “look on my works” written in white on the nearby rocks. To the left of the body is the poor guy’s head — as well as the first piece of the map. 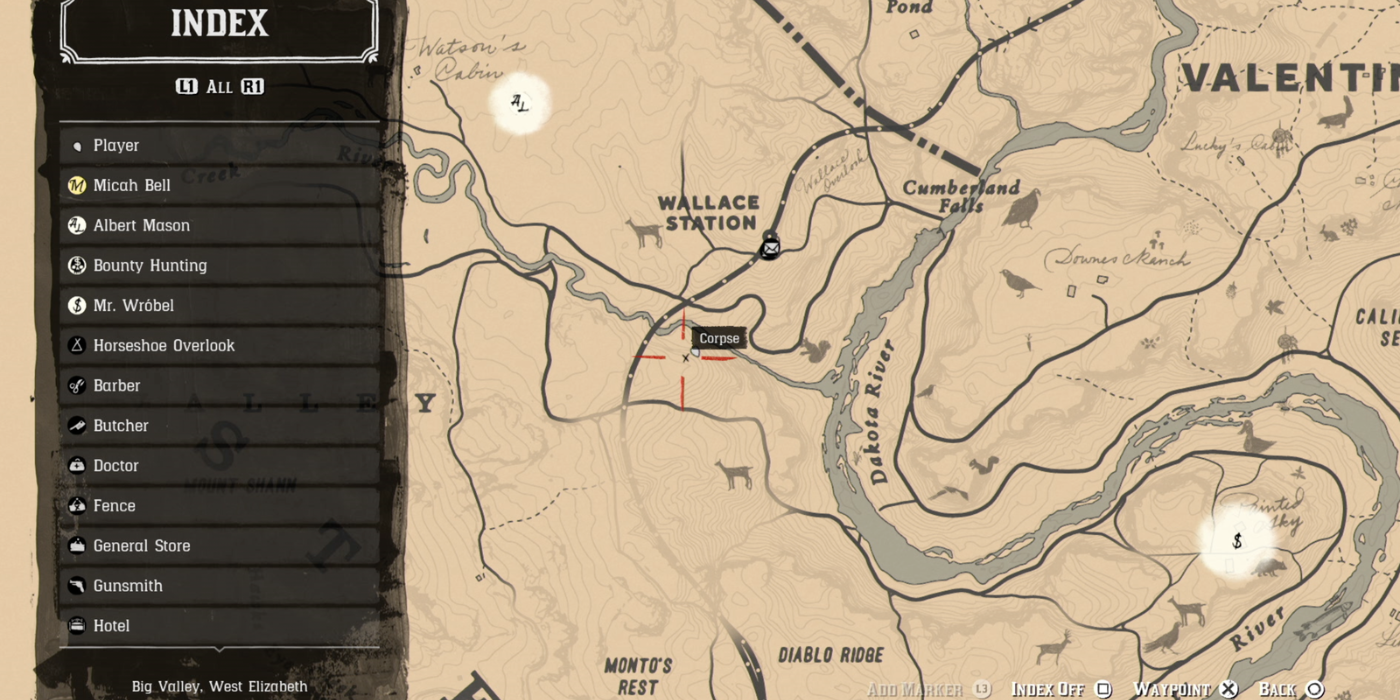 This time the words “do you see” are written right next to the body. The head is not far from the body, which is where you will find the second piece of the puzzle. 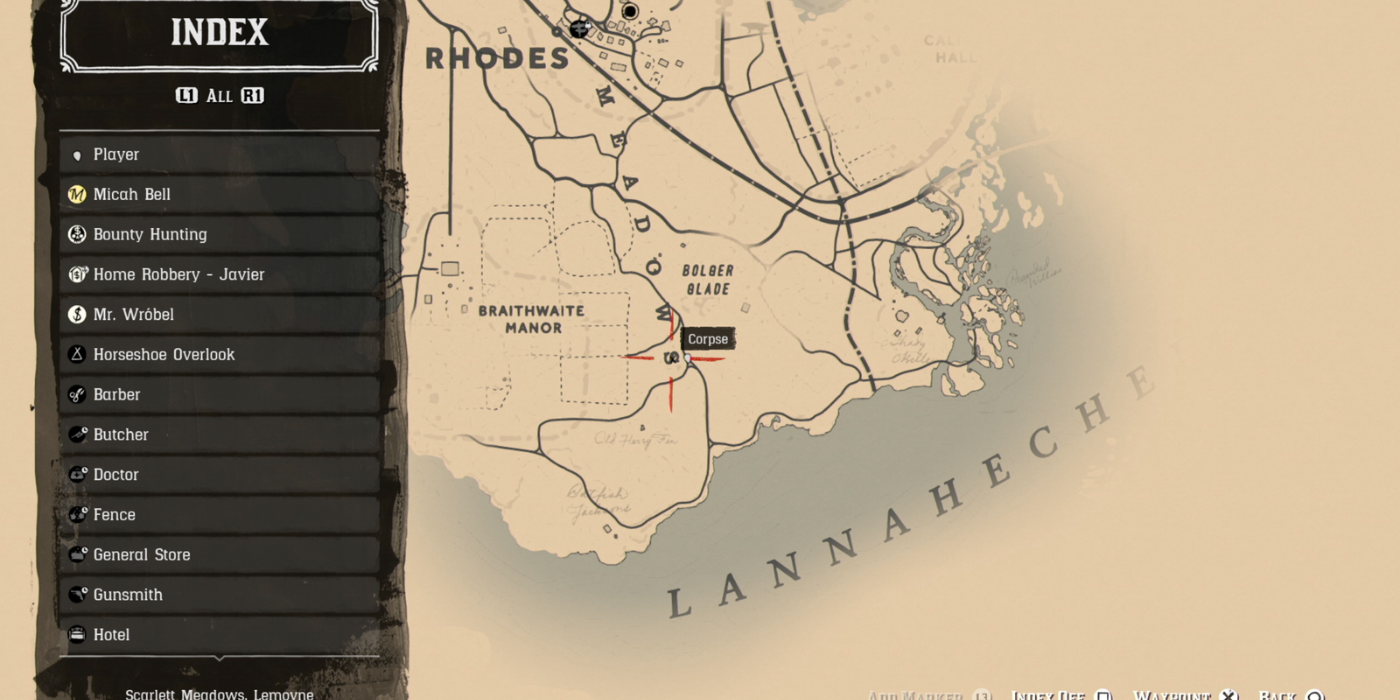 Located quite a bit far away from the other two bodies is the third and final body. It can be found in the Lemoyne part of the map, to the east of Braithwaite Manor. The body is hanging on a large tree with another message in white, this time reading “behold.”

The head containing the final piece of the map will be located on the other side of the tree, bringing the mission one step closer to being completed.

What The Map Shows And Where To Find It 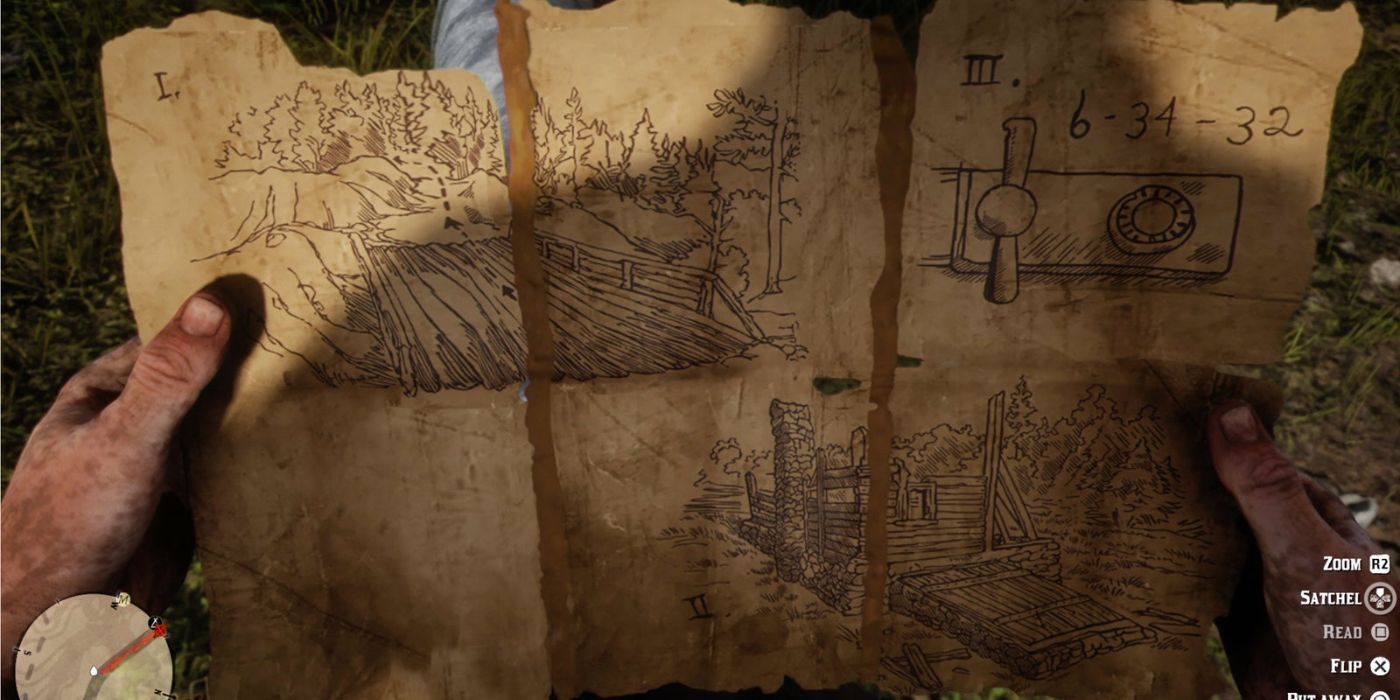 Once assembled, the map pieces will show a wooden bridge pointing in a certain direction, a ruined cabin with an intact basement door, and a combination lock with its combination. These are clues that point the way to the cabin. That cabin is ironically entitled Lucky’s Cabin. 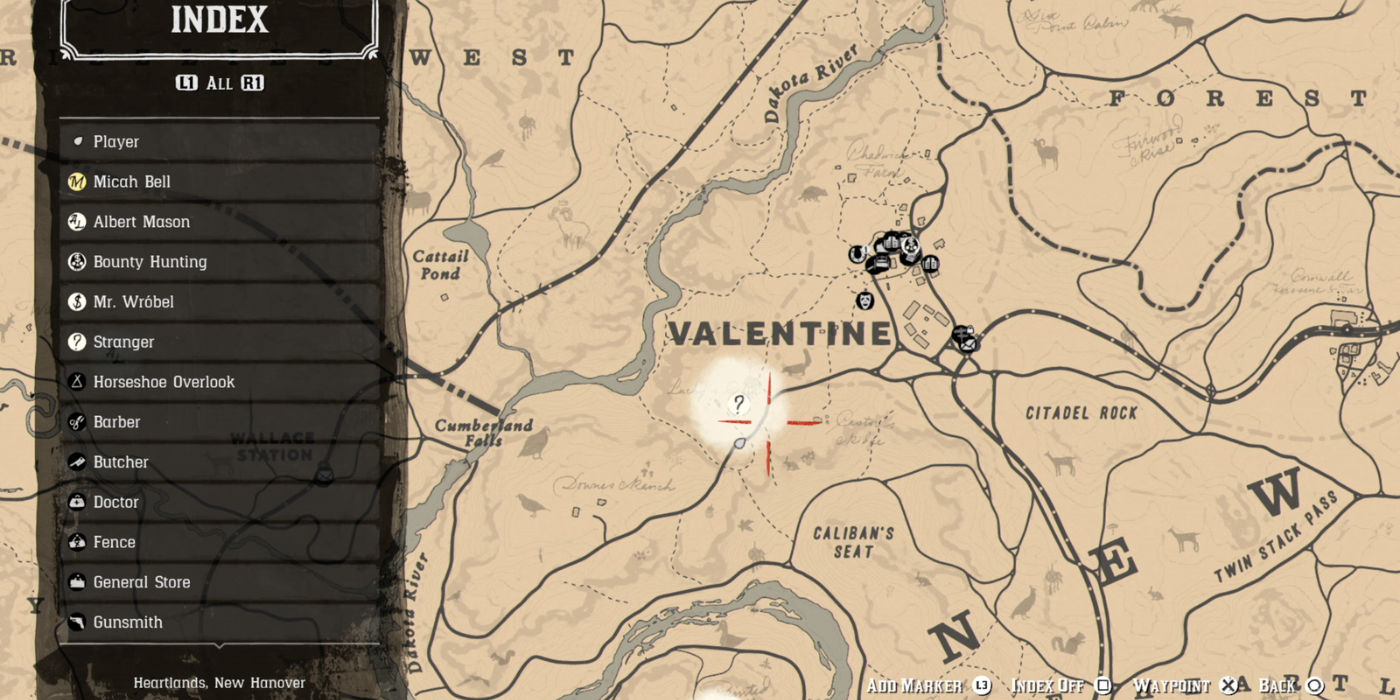 The map can be found to the west of Valentine, south of the L — as seen in the image above. Follow the road to see the bridge indicated on the map, which eventually leads to the same cabin depicted on the recovered map. There may be some snakes nearby, so be prepared for that. Approach the basement door, which will open since you know the combination now. 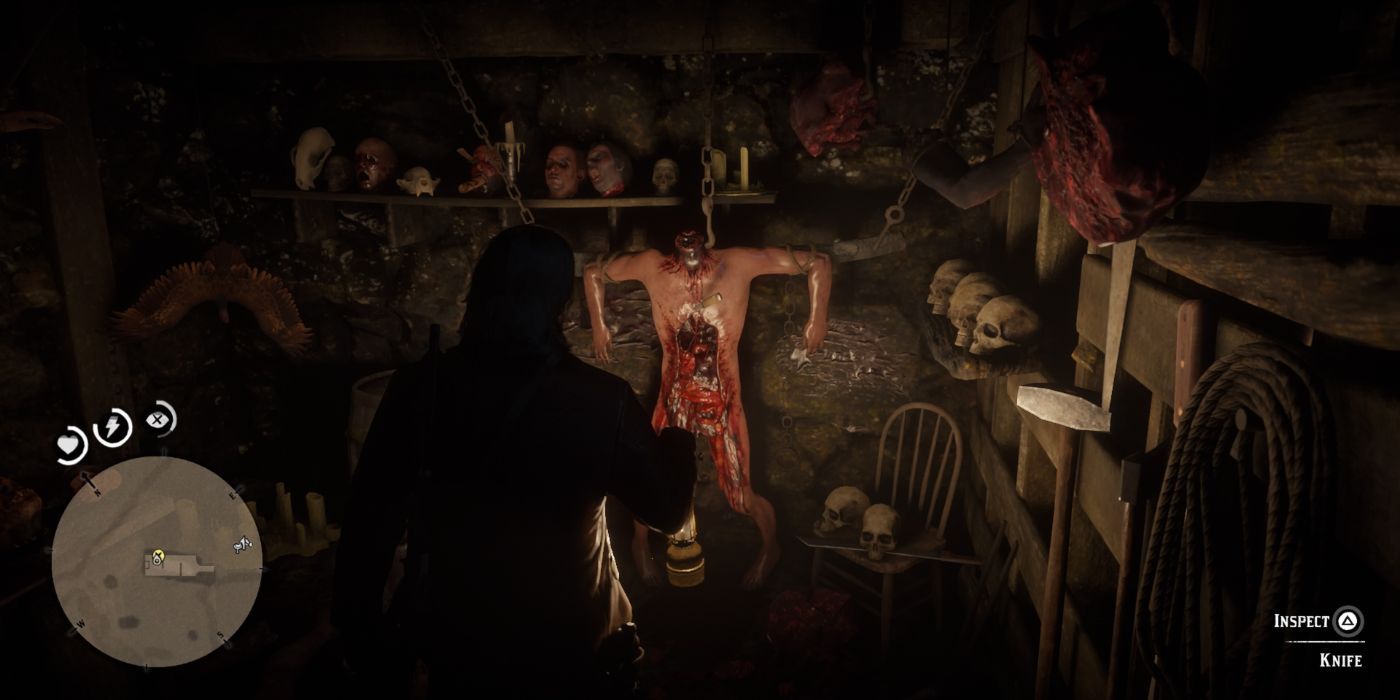 What is inside is truly disturbing, but you’ll still want to check it out thoroughly as there is no returning here once you are finished. Inspect the knife in the back to trigger a cutscene where Arthur or John is knocked out by Lowry.

He will go on a rambling before a button prompt appears to throw something at him, which will then lead to a fistfight. Do not kill him since that will fail the mission. Knock him out and then take him to the jail in Valentine. 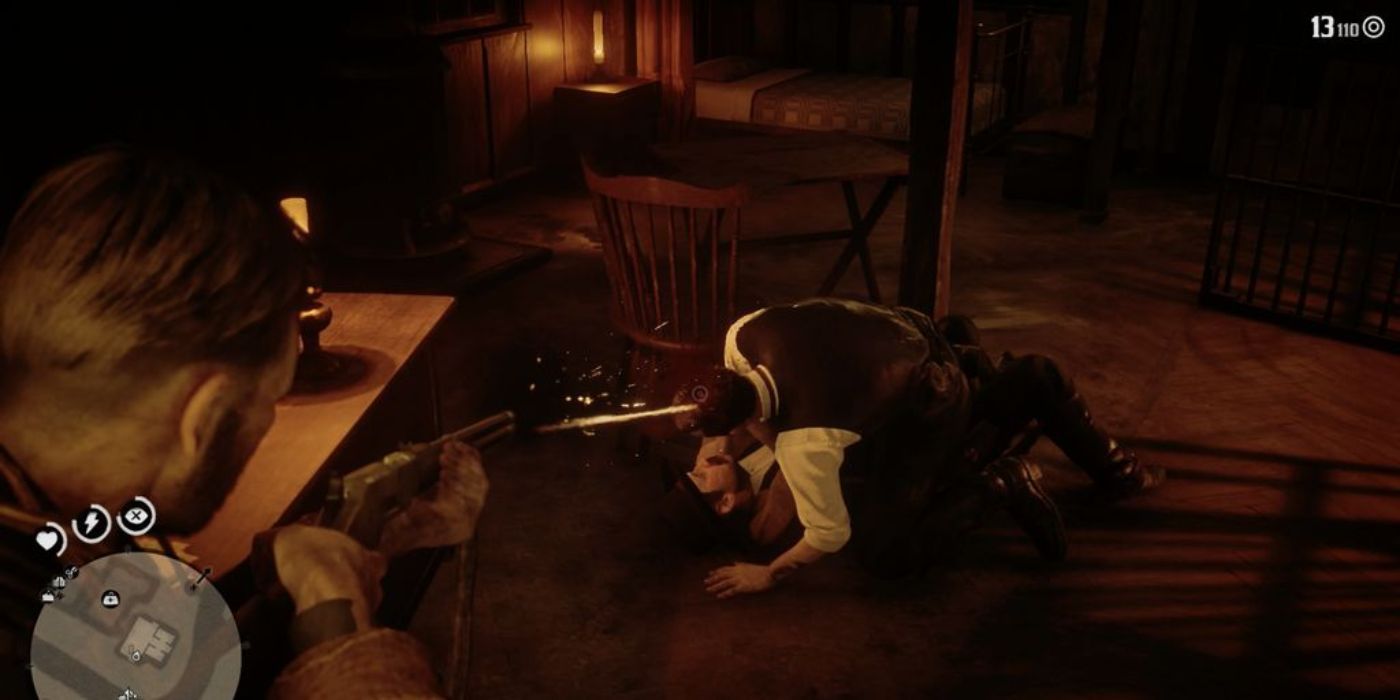 Once you bring him in, Arthur or John will comment on how sick the person is as they hand Lowry over to the sheriff. Right before the sheriff can put him in a cell, Lowry will start biting and attacking him, pinning him to the floor.