Even as economies struggle with the chaos of the pandemic, the AI startup space continues to grow stronger with increased investments and M&A deals.

According to the latest State of AI report from CB Insights, the global funding in the segment has seen a significant surge, growing from $16.6 billion across 588 deals in Q2 2021 (figures show $20B due to the inclusion of two public subsidiary fundings) to $17.9 billion across 841 deals in the third quarter. Throughout the year (which is yet to end), AI startups around the world raised $50 billion across 2000+ deals with 138 mega-rounds of 100+ million. As much as $8.5 billion of the total investment went into healthcare AI, $3.1 billion went into fintech AI, while $2.6 billion went into retail AI.

The findings show how AI has become a driving force across nearly every industry and is drawing significant attention from VCs, CVCs, and other investors. In Q3 alone, there were 13 new AI unicorns globally, bringing the total number of billion-dollar AI startups to 119. Three startups also reached $2 billion in valuation — Algolia and XtaPi from the U.S. and Black Sesame Technologies from China.

Meanwhile, in terms of M&A exits, the quarter saw over 100 acquisitions like the previous one, putting the total exits for the year at 253. The biggest AI acquisition of the quarter was PayPal snapping up Paidly — a company determining creditworthiness using AI/ML — for $2.7 billion, followed by Zoominfo’s acquisition of Chorus.ai — a startup using AI to analyze sales calls — for $575 million. 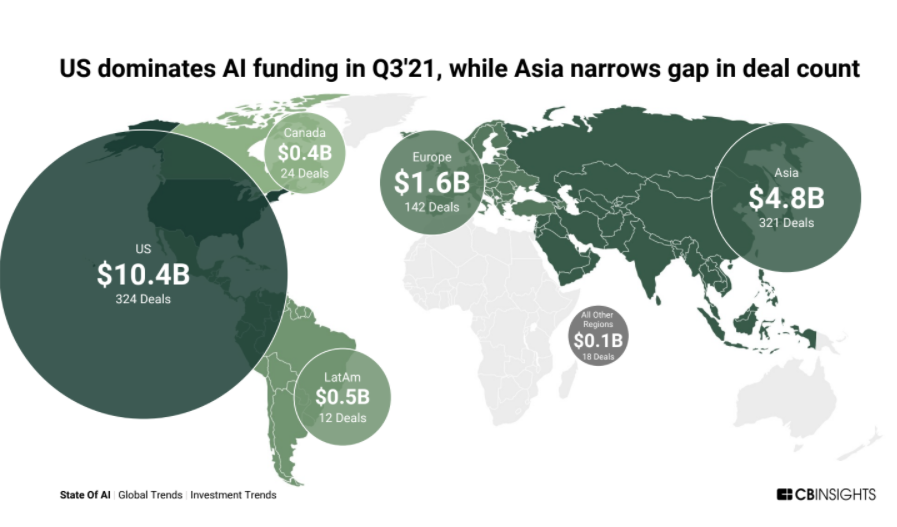 Out of the $17.9 billion raised by AI startups worldwide in Q3, a significant $10.4 billion went to companies based in the U.S. and $4.8 billion into those in Asia. However, Asian firms raised this amount in nearly just as many deals (321) as in the U.S. (324), which signals that the average deal size was smaller there compared to U.S. Mega-round deals in the U.S. stood at 24 in Q3, while Asia saw 13 such deals.

Databricks, Dataiku, Olive, XtalPi, Datarobot, and Cybereason were the companies with the biggest rounds in the U.S. in the third quarter.

As compared to Asia and the U.S., funding in Canada, Latin America, and Europe regions was the lowest at $0.4 billion, $0.5 billion, and $1.6 billion, respectively. These regions cumulatively saw just eight mega-rounds.