The Secret of Monkey Island and Monkey Island 2: LeChuck’s Revenge both have a very special place in my heart. They were two of my favourite games growing up, kickstarting my love of the point-and-click genre, and they particularly stand out as being two of the few games I enjoyed with all three of my siblings before they eventually ‘grew out’ of gaming.

My love for the series continued, but without Ron Gilbert at the helm, the subsequent titles never quite managed to recapture the same initial magic for me. So with Gilbert setting sail once more with Return to Monkey Island, it’s been hard not to pin all my hopes and dreams on this long-awaited comeback. Would it be just as amazing? Would I love it just as much? Would I finally find out what the secret of Monkey Island was?

I went into things committed to getting the whole experience, choosing the hard difficulty and promising myself I wouldn’t use the hint system, like a smug elitist idiot. The idea of having a hint system so easily at my fingertips felt like cheating, and initially, I wasn’t fond of it. Ultimately, I found myself pulling out my hair over a particular puzzle and, feeling like I had exhausted every clickable item and combination with no results, that’s where the hint book came in. 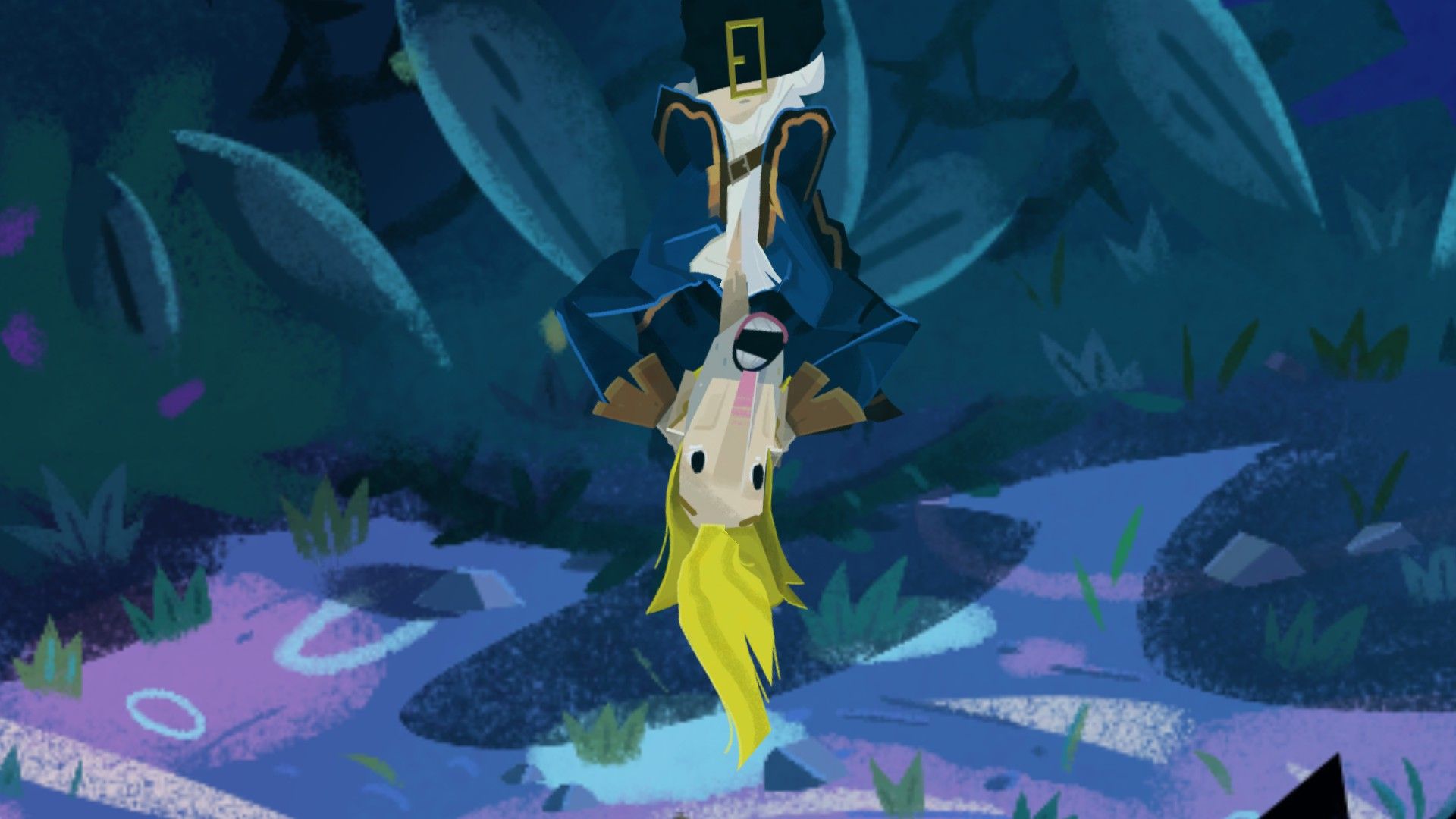 Once I’d used the hint book for the first time in Return to Monkey Island, I felt less frustrated by the idea of dipping into it as needed. When I finally caved and opened the hint book, I was pleasantly surprised (and impressed) with how it worked. It doesn’t simply give you the answer but provides a subtle hint based on exactly what you’ve done so far, or where you are in the game. It’s tailored to your progress, rather than just being a quick reference of ‘X puzzle is solved by XYZ’. I liked that it nudges you into finding the solution a little step at a time, so you can sneak a peek, then continue to figure out the rest by yourself. It made me feel better about dipping in; as long as I enjoy the game, it shouldn’t matter how I play it.

If I’m being honest, I even had my own version of a hint book as a kid. Back then, it meant booting up one of my siblings’ save files and nosing around their inventories to see what they had stowed away, or looking at which locations they had unlocked, then trying to figure out how to achieve the same results for myself.

Despite my initial reluctance at having all these extras, such as the hint book, casual mode (which removes and/or simplifies certain puzzles), and a to-do list to guide you while playing, they aren’t a bad thing. These features make Return to Monkey Island all the more inclusive for players and ensure their adventure stays enjoyable when it could easily become frustrating enough to make them give up their pirating ways for good. I write guides for a living. I should know more than most that people like to have a helping hand and a little direction. Having it built into the game is a no-brainer really, and if you don’t want to take advantage of these options, you don’t have to. Gilbert might have put me out of a job, though. 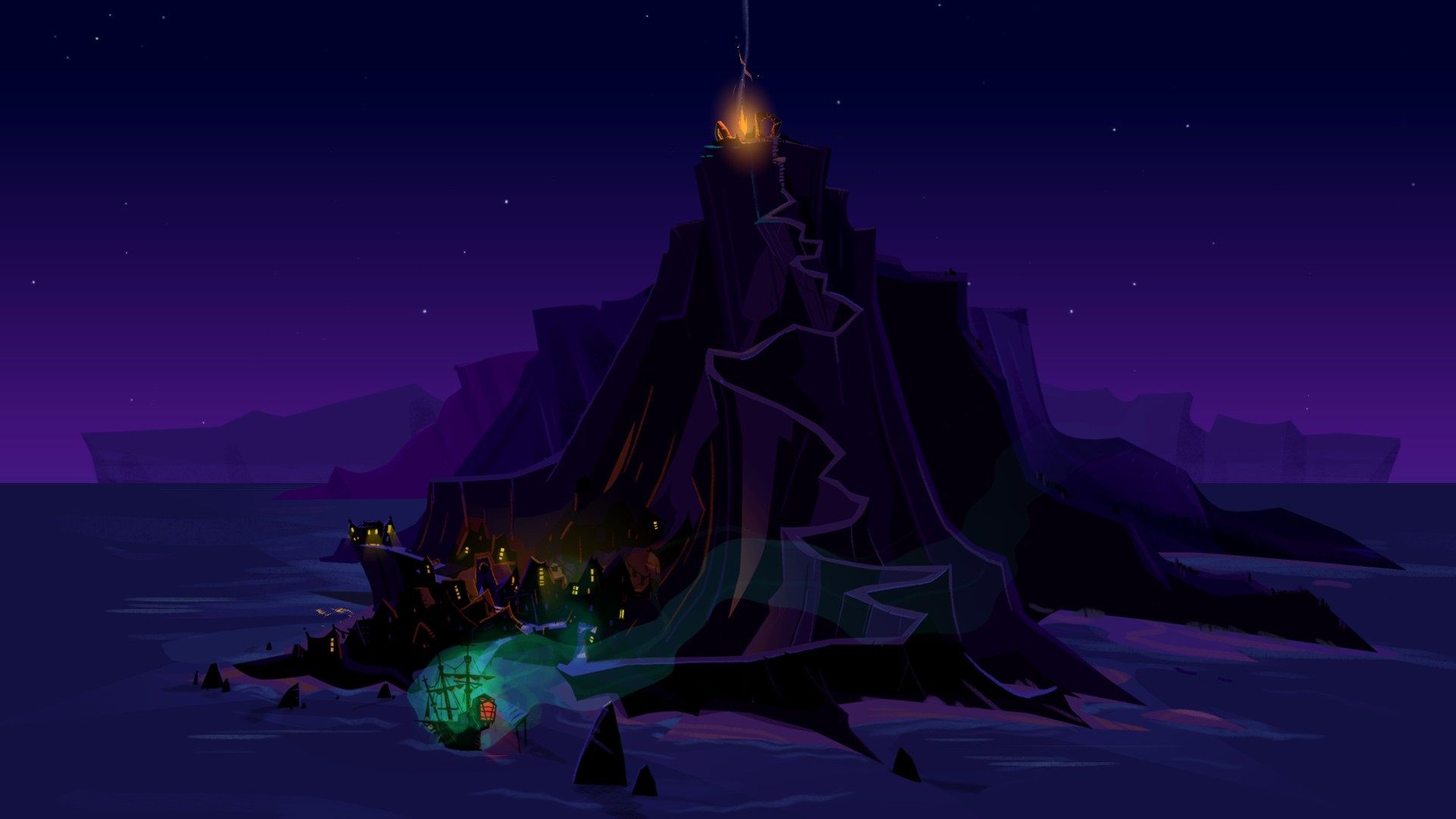 I think long-time fans of the series need to realise this isn’t going to be a carbon copy of Gilbert’s first two Monkey Island adventures, but that doesn’t mean it’s not just as good. Times have changed, so the series has changed too, but that doesn’t mean it’s not pure Monkey Island at its heart. The game conveys this in more ways than one. It’s not just technically different, including shiny new features we didn’t have before, but the setting has changed too. Melee Island, the first place we encounter in the original entry, is now run-down with boarded-up buildings and closing stores. This evident passage of time emphasises that things have changed, but the memories we hold dear are all still there and ready to be fondly remembered.

There’s already been an uproar over the new art style, though I don’t understand why. The graphics are quirky and charming, which is precisely what Monkey Island has always been. As far as I’m concerned, it’s ticking the same boxes that it always did even though it’s had a facelift. We shouldn’t be afraid of classic games changing like this, it’s much better to embrace it.

That said, I had to learn to stop clutching so tightly at my sense of nostalgia. Don’t get me wrong, there are still plenty of trips down memory lane for the avid Monkey Island fan, with plenty of throwbacks, in-jokes, and fan service. There are bound to be a couple of things you wish were included or featured more prominently — for me, it was the sword fighting — but you can’t say that the game isn’t crammed full of nostalgia. It was also lovely to see Gilbert embrace the whole of Monkey Island history, even if he wasn’t involved, such as Murray the talking skull and having Dominic Armato return as the voice of Guybrush. It’s a nicely bubbling International House of Mojo boiling cauldron pot with all the right ingredients, including bringing back the original composers to give us that typical jaunty Monkey Island tunage. 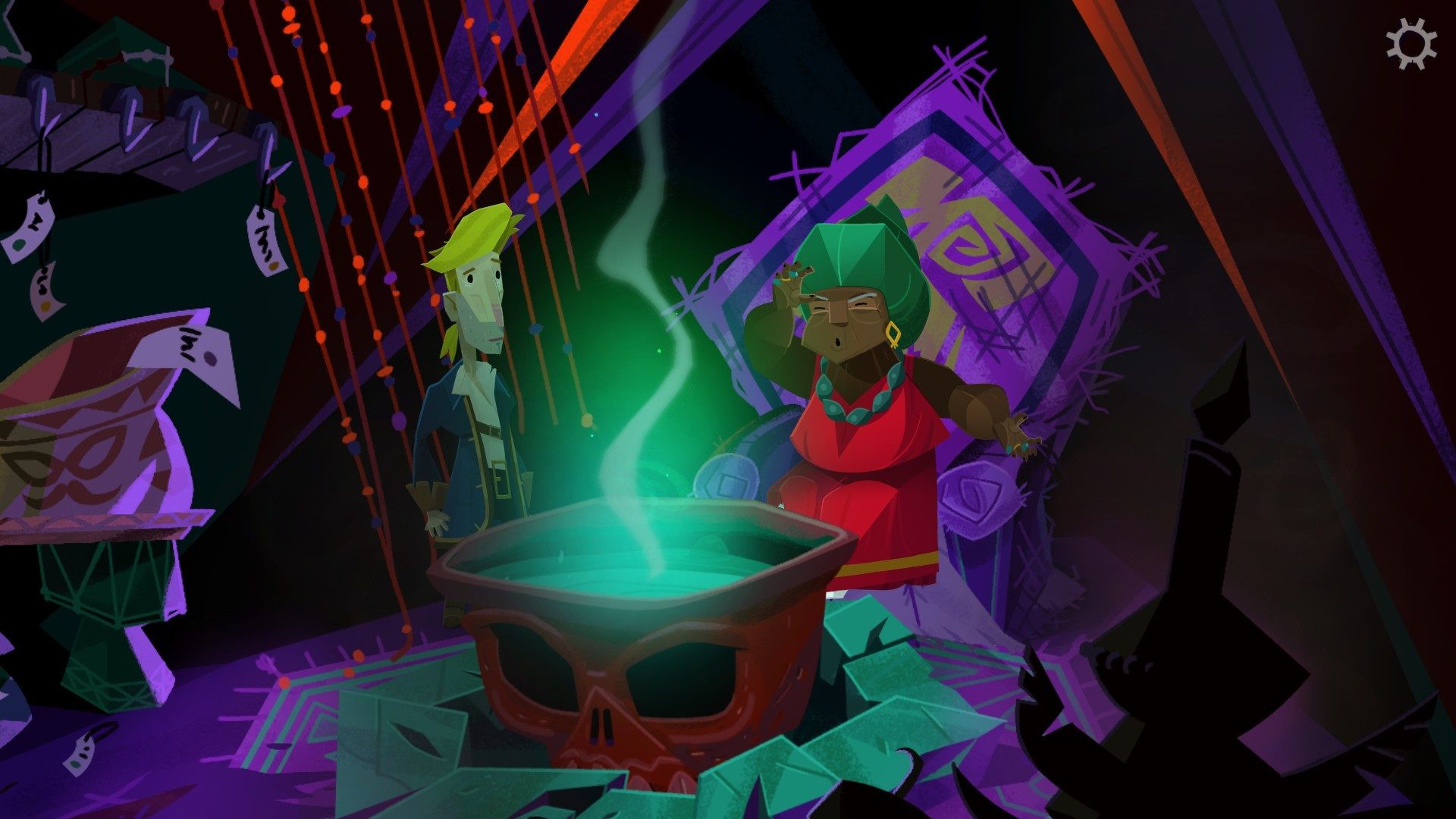 I did stumble at first when it came to accepting change. Without ruining the storyline, one of the first ‘puzzles’ you come across is having to find a piece of eight to purchase something. You find a slug — a piece of metal the same size as a piece of eight — so I immediately assumed I’d have to make it look like a piece of eight to progress. I was wrong. It’s absolutely passable as is. Just hand it over. I felt a little underwhelmed at this. It was too simple. Where were the hard puzzles I was used to? Don’t worry. They’re still there. Like most modern games, Return to Monkey Island eases players into things, so don’t just play the first section and write the game off as having lost its mojo.

You’ll undoubtedly find that bittersweet enjoyment of troublesome puzzles, especially on hard mode. You’ll know what you need to do and what it involves, but you’re somehow not quite sure how to do it. It’s peak puzzle game frustration. You hate it, you love it, you’re going to scream a little, but you know you’ll keep at it until you figure it out. Or, you know, peek in the hint book and kick yourself when you realise the solution. But you just can’t beat that feeling of satisfaction when you overcome a puzzle that was sorely testing you.

There were a few times I failed to find the right answer straight away because I was either overthinking or underthinking the process involved. I had all the pieces of the puzzles, but I was attempting to force them together the wrong way. Classic Monkey Island, really. Like in Secret, when you’re trapped underwater, but all you have to do is pocket the damn statue weighing you down. I can’t remember the last time I wrote notes on paper to help me solve a puzzle game, but I certainly did for this. It took me back to the days of storing notes in those giant PC game boxes we had in the ‘90s. Whether it was Myst, Broken Sword, or Monkey Island, I’d keep scraps of paper where I’d written down what I thought I’d need to remember. Playing Return to Monkey Island took me back to my childhood in more ways than one. 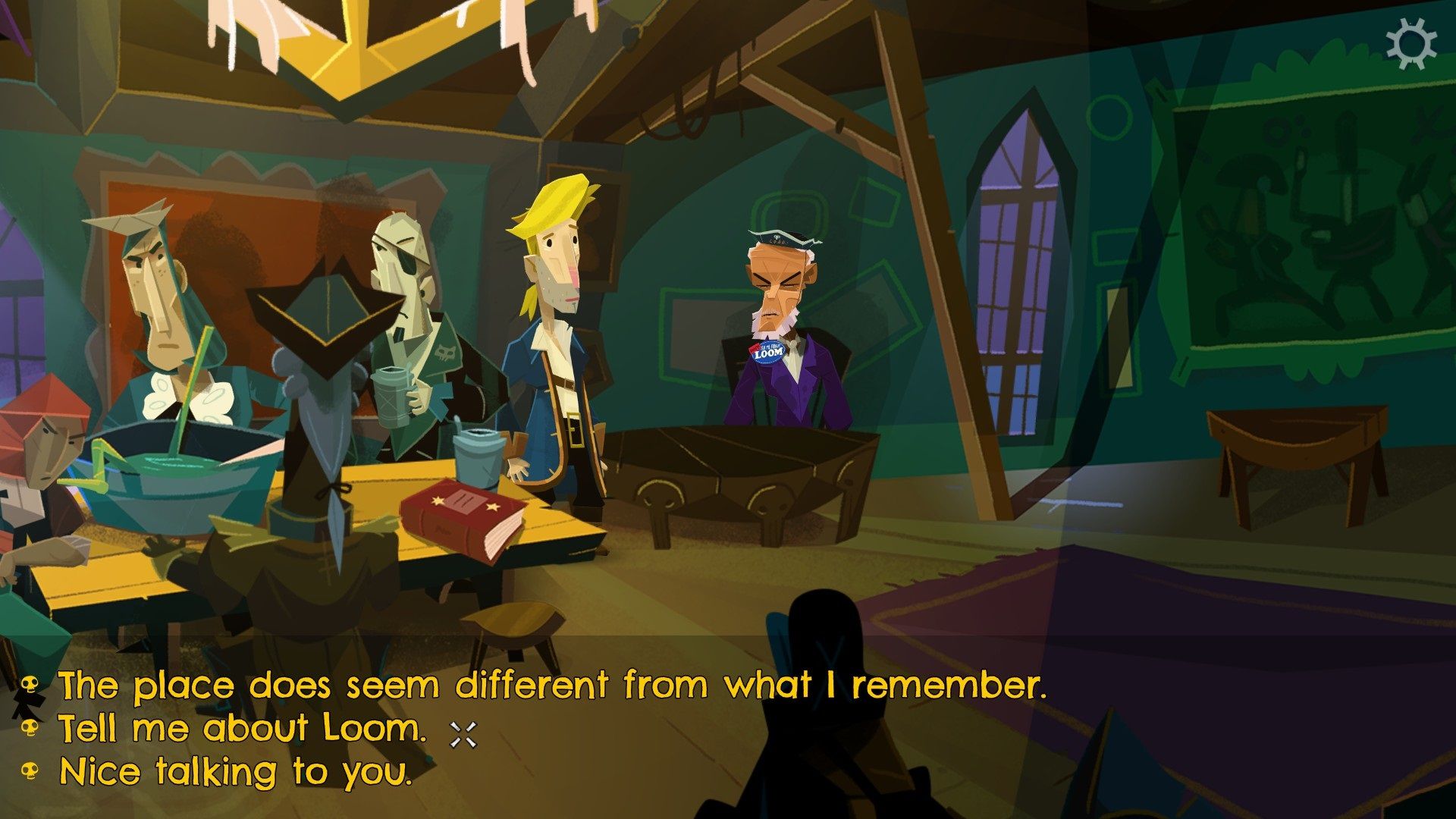 One thing I especially loved about Return to Monkey Island was the attention to detail throughout. I already mentioned the hint book is tailored to what you’ve done, but so is the dialogue, and characters will remember what you’ve said and done. For example, in a moment of desperation to solve a puzzle, I made the mistake of showing a character an item I had. Fast forward to when I’m in disguise, and the same character sees me with the same item, you better believe they questioned why I had it as they knew it belonged to Guybrush Threepwood. Little touches like that are what make the game truly stand out.

Another beautiful touch was the scrapbook in the menu, which recounts Guybrush’s adventures so far for anyone who wants a recap. This updates as you undertake your latest quest to uncover the secret of Monkey Island, and, more importantly, features a very touching note once you complete the game that I urge everyone to read.

Return to Monkey Island is everything I wanted and more. Daft humour with plenty of dad-worthy gags, puzzles to both frustrate and delight you, lovable throwbacks around every corner, and all while being effortlessly enjoyable. It feels like Monkey Island has fittingly come full circle with this title in many ways, and yet I can’t help but be selfish and want more Guybrush from Gilbert. There’s still room in the scrapbook for more adventures, and if we’re lucky, maybe we won’t have to wait 30 years for the next title.

Score 4.5/5. A PC review code was provided by the publisher.