Each of the six survivors present a uniquely enjoyable playstyle thanks to a handful of exclusive skills. The Huntress’s Laser Glaive bounces between targets, dealing increased damage with each blow, MUL-T’s retool switches between two separate sets of weapons and equipment, and the Engineer’s turret can wear sunglasses. Five of the six survivors must be unlocked by completing challenges, which provided a fun carrot to chase across multiple playthroughs that was easy to keep track of via the logbook.

You’ll be attacked by everything from suicidal exploding jellyfish to lumbering Stone Golems that fire off a devastating but easy-to-dodge laser from afar, and the resulting variety keeps combat engaging as the threat ramps up. Distinct silhouettes and audio cues make it easy to react to an impending threat at a moment’s notice. Boss fights, too, are well-telegraphed to feel fair. and their impressive size and spectacle evoke a feeling of challenge.

Distinct silhouettes and audio cues make it easy to react to an impending threat at a moment’s notice. 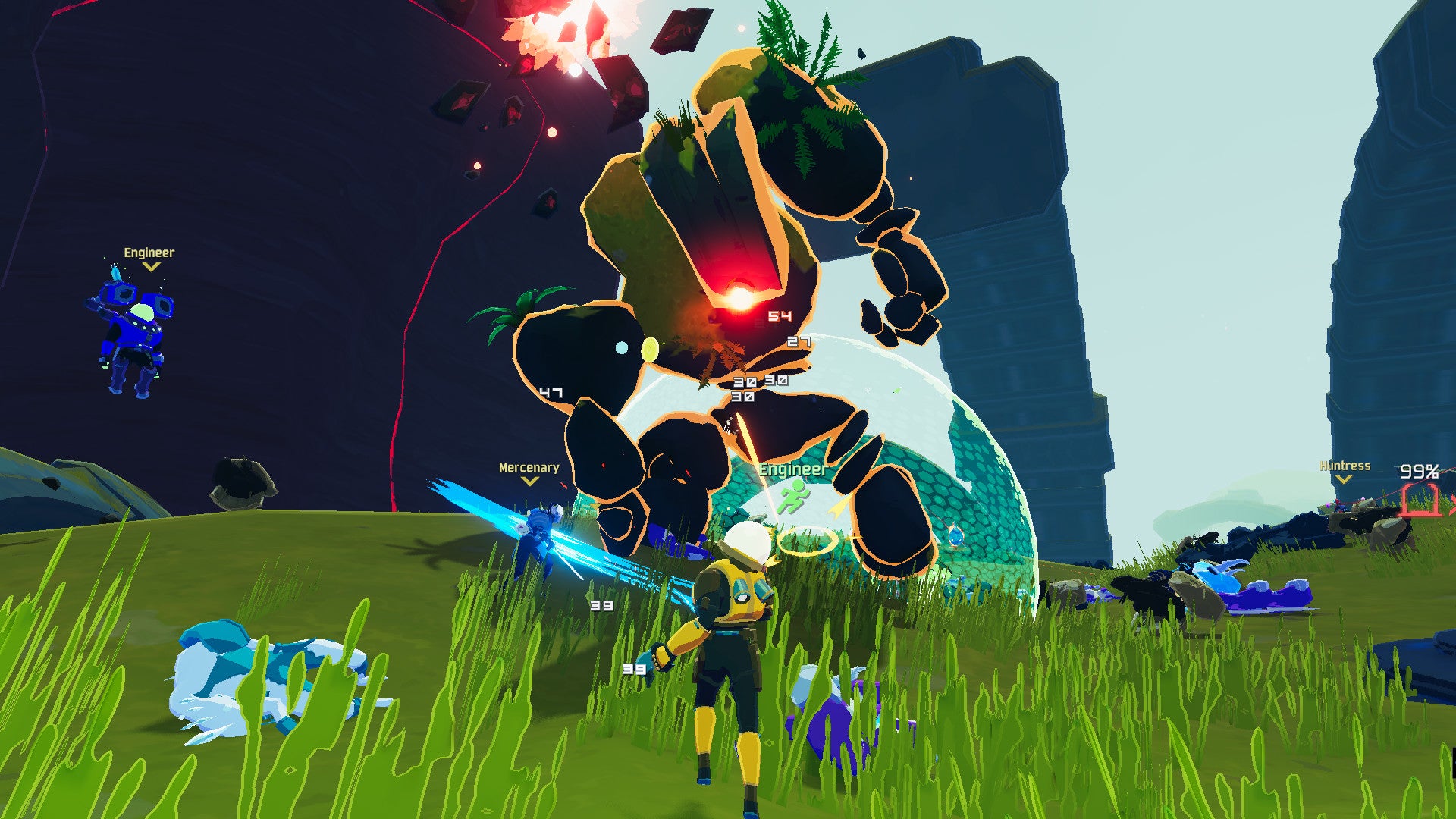 As a result, I felt in control of how much gear I acquired during any given run, just not what I was getting. The randomization of loot undoubtedly plays a big part in giving Risk of Rain 2’s its tremendous replayability, but at times it felt like a flat-out hindrance because I simply couldn’t seem to find crucial common items that were usually abundant. There are a few choices to be made where you can spend rare Lunar Currency that persists across playthroughs. But for the most part, you’re at the mercy of the lady luck when it comes to progression.

Risk of Rain 2 is best played in a private lobby with friends from both a gameplay and connectivity standpoint.

There are an abundance of “under construction” icons found in the logbook, but other than that Risk of Rain 2’s early access state only really seems to matter where matchmaking is concerned. More than half of my dozens of attempts to use quickplay to match with strangers ended in disaster. Lobbies failed to start, latency was sometimes unbearably high, and disconnects were common. These faults are compounded by the lack of common multiplayer amenities like a ping display, host migration, or reconnect functionally. The good news is that Risk of Rain 2 is best played in a private lobby with friends from both a gameplay and connectivity standpoint, here my experiences were much smoother.

Risk of Rain 2’s early access hooked me with its fluid 3D action and distinct classes, and held my attention long after I’d seen everything it had to offer with its berserk roguelike progression, and the ability to squad up with friends. It’s networking woes could use some TLC, but that’s the only bad news. What’s here now is polished, fun, and immensely replayable, and what’s on the horizon leads me to believe I’ll be playing Risk of Rain 2 for a very long time to come.