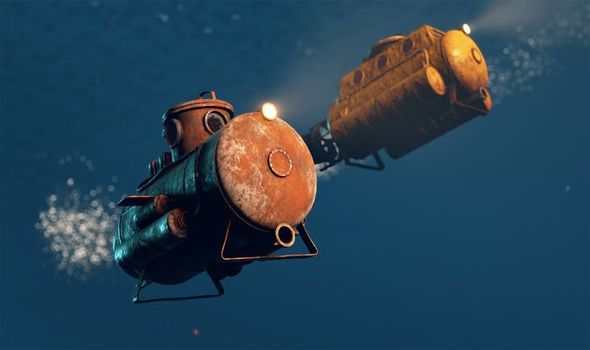 The August Rust update promises to add a number of big new items to the game, as well as new ways to explore the map.

Fans will soon be able to go deeper than they have ever gone before as this week’s Rust patch makes it possible to build new ocean-going vehicles.

But while the underwater elements of Rust will be far more accessible, there will also be added dangers.

Exploring the deep will come with its own rewards but gamers will have to watch out for Sharks roaming the waves.

Each dive site has a chance to spawn a shark that will patrol the area and must be defeated before you are able to claim whatever treasures are found at the dive site.

Gamers will be able to use a melee weapon in an attempt to defend themselves but chances of survival are very slim without some kind of underwater ranged weapon.

That’s where the Speargun comes in, a key piece of kit for anyone who wants to go treasure hunting.

To be able to defend yourself at a distance underwater and you can now learn how to craft a spear gun + ammo from a Level 1 Workbench.

The new weapon can only be fired while underwater and packs a punch similar to a crossbow, albeit with a slower-moving projectile.

And the good news is that It is also very effective at dispatching hostile human beings, making it a far more versatile item.

A big step in exploring the new underwater worlds will be buying a submarine from the boat shops at fishing villages.

There are two versions that can be purchased; The two-person submarine comes with internal fuel access and an instrument cluster including rudimentary sonar.

Meanwhile, the cheaper one-person submarine seats one, and comes with external fuel access and no instruments.

And as confirmed in today’s patch notes, both submarines have torpedo tubes that can fire two torpedo types:

A message from the Rust development team explains what these new locations contain, telling fans this week:

“The new underwater labs are fully procedural dungeons that reside on the ocean floor. They will come in a variety of shapes and sizes, and for now, with two entry points.

“You enter them from a ‘moonpool’ in which you re-surface with your submarine. From there, make sure you have come prepared to face the various puzzles on offer.

“The bases have a wide network of CCTV cameras you can connect to to plan your exploration ahead of time. The new and improved player map will also let you see the layout of the base for each floor. You will also find microphones in some rooms that let you broadcast your commands into the entire base’s network.

“If you like to take risks, the occasional mess hall room will allow you to play some high stakes poker, listen to music with your group and cook some meats before heading back to pick a fight with the NPCs that are dwelling in the corridors.”