So you might have accidentally unleashed an ancient, fiery evil on the Sea of Thieves, but it could be worse right? Well after you’ve completed Seabound Soul Tall Tale, you’re free to take on the Heart of Fire and complete the two-part Arc that finishes introducing Flameheart and his crew to the game.

This Tall Tale heavily features exploration and platforming, much like the Shores of Gold Tall Tale, but there are still a few potential moments you’ll really want another crewmember or two to have your back.

How To Begin The Heart Of Fire Tall Tale 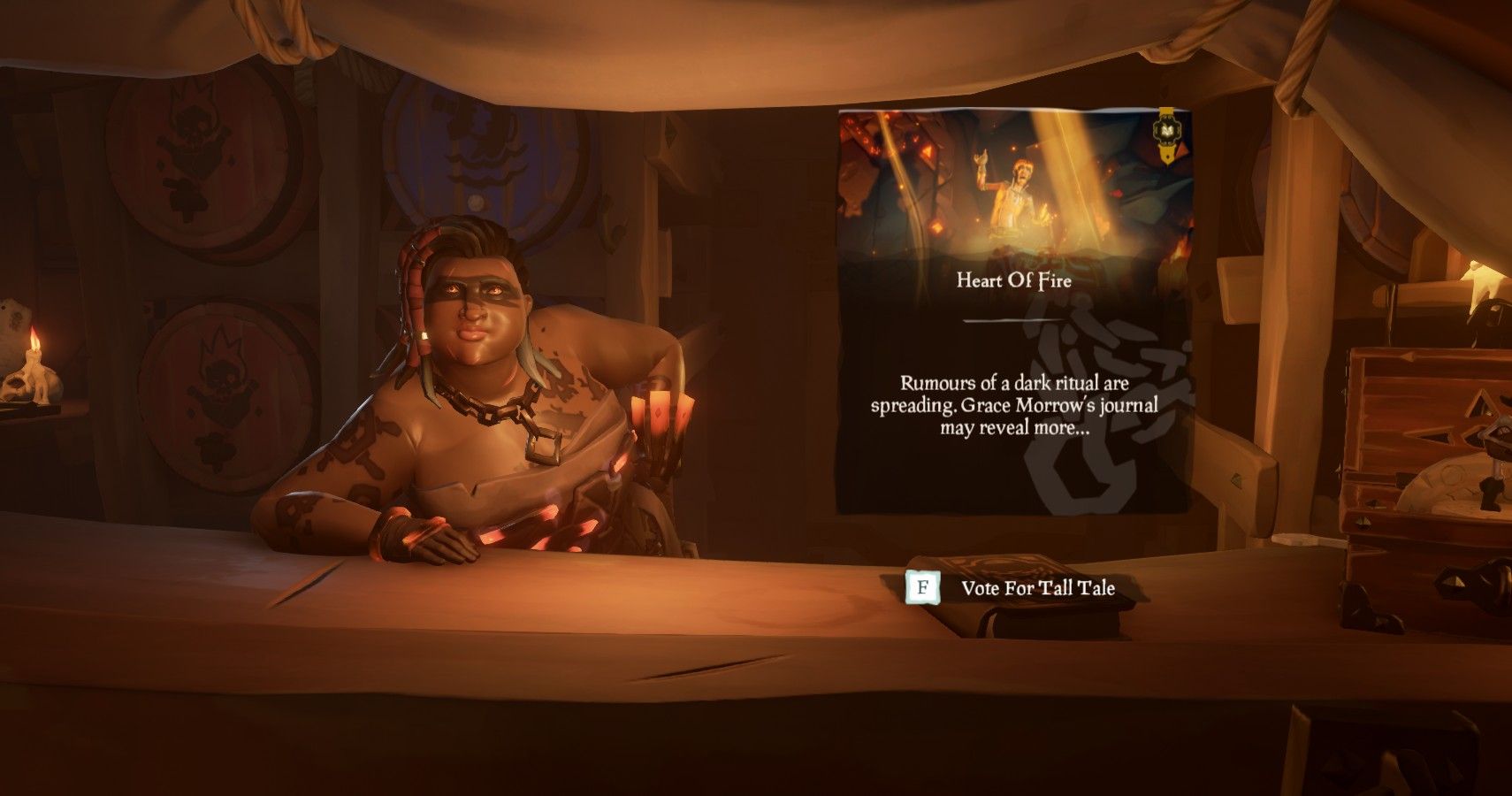 To begin the Heart of Fire Tall Tale, you’ll have to head over to Morrow’s Peak Outpost in the Devil’s Roar. You will have come here before to start the Shores of Gold Tall Tale, but rather than heading to Grace straight away, you’ll want to go inside the tavern and find the Tall Tale book beside the Tallulah at the bar.

Have over half your crew vote on it and you’ll begin the adventure with Tallulah asking you to do the most exciting thing ever: return the book to Grace outside. 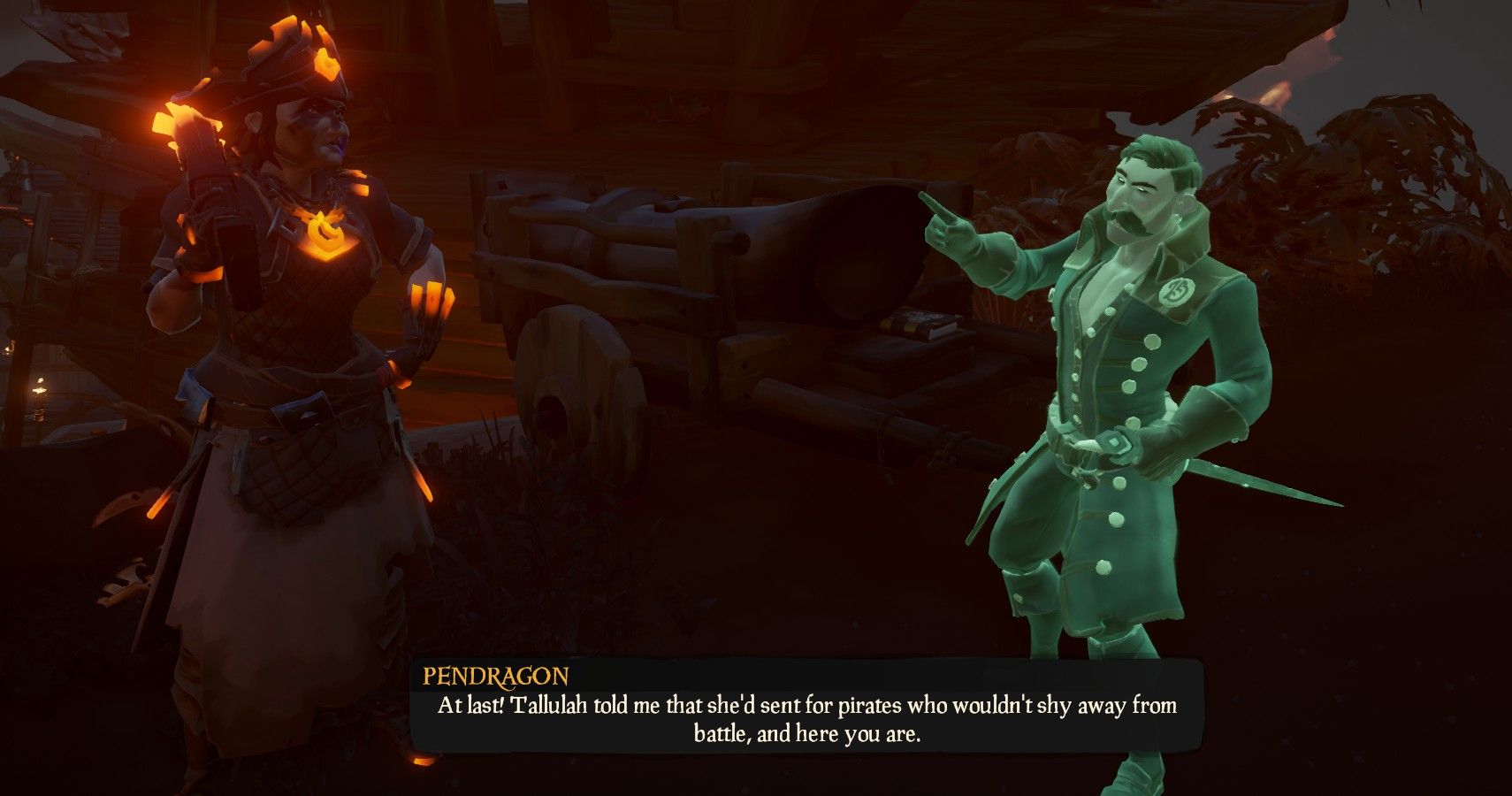 Head outside and Grace will begin talking but before long Pendragon will once again appear and ask for your services to free his trapped crew. It appears that Stitcher Jim, long-time enemy of Grace and as it happens the person this book you’ve picked up is about, is trying to summon an Ashen Lord for Flameheart’s army. 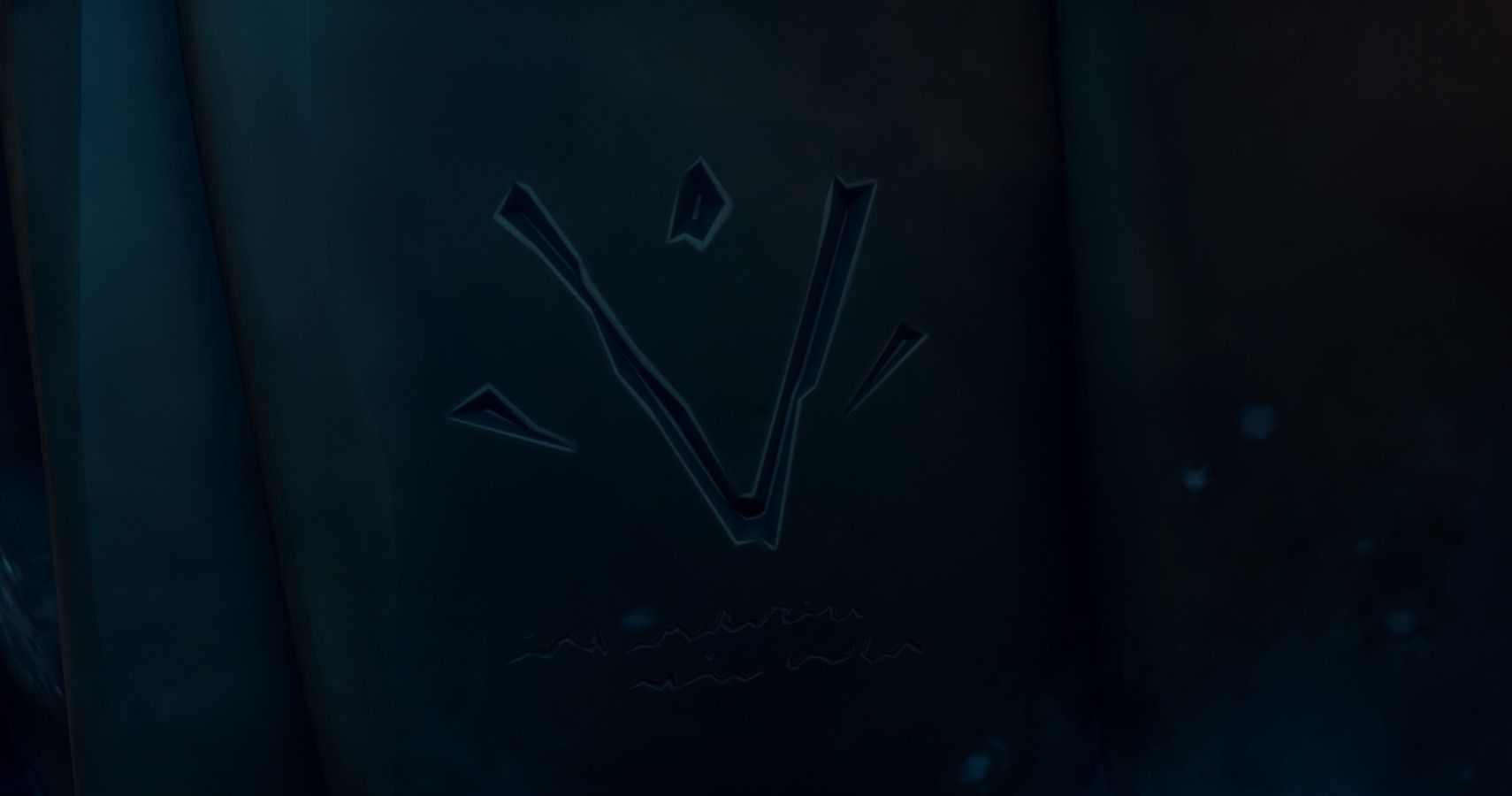 The journal tells you to find Stitcher Jim’s lair over one Liar’s Backbone on the edge of the Wilds, so set sail that way and read up on the rest of the journal if you want to learn more about his relationship with Grace on the journey.

Once you arrive you’ll soon find a cave, blocked by a large stone door. Look around for a nearby lever and you’ll have access to the lair. Unluckily Stitcher Jim is no longer here, but you can find his notes and a mysterious key if you can open the strange heart-shaped chest at the end of the cave. 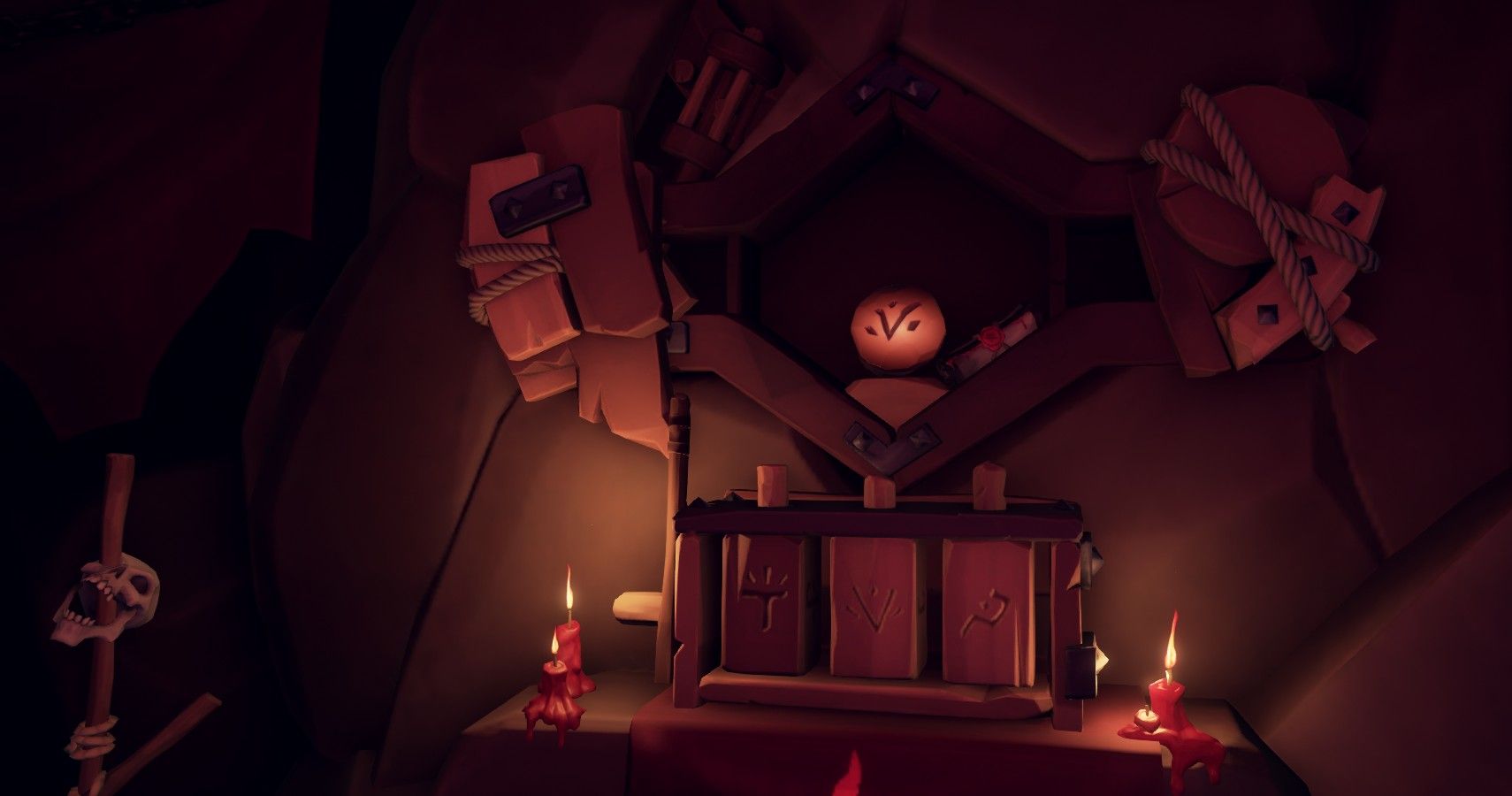 Underneath the chest, you’ll see a mechanism covered in runes that match those on the world’s, and this is what you’ll need to unlock the chest. Examine the carvings on the wall and you’ll learn that each symbol is a different word, as well as a few thoughts from Stitcher Jim.

When you find that ‘flame’ and ‘heart’ are options you’ll probably work out they’ll fit into the answer, but the first word can prove a little tricky. Reading his thoughts you get a sense that some of the titles he likes to call Flameheart, but ‘king’ seems to be the most beloved.

Put the words ‘King’, ‘Flame’, and ‘Heart’ into the mechanism and the chest will open, giving you more clues to follow as well as a mysterious key. 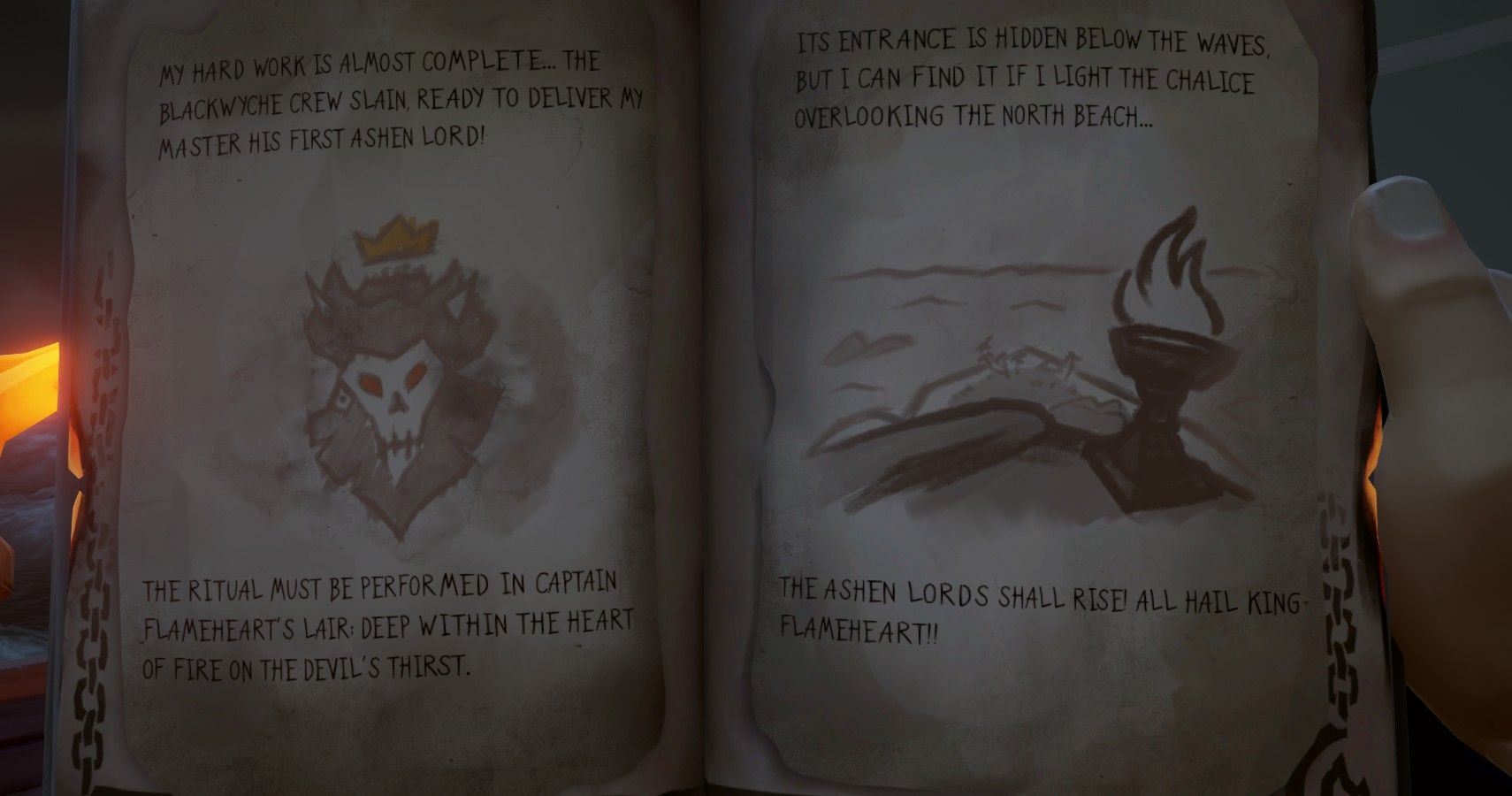 The notes that Stitcher Jim has left behind point you down to Devil’s Thirst at the southern edge of the Devil’s Roar.

Set sail for the isle and look out for the chalice on the island you’ll need to light. While it is at the north of the island it’s quite high up and only accessible from further down the coast so look for a place to drop anchor and head up the climb to reach chalice to burn. 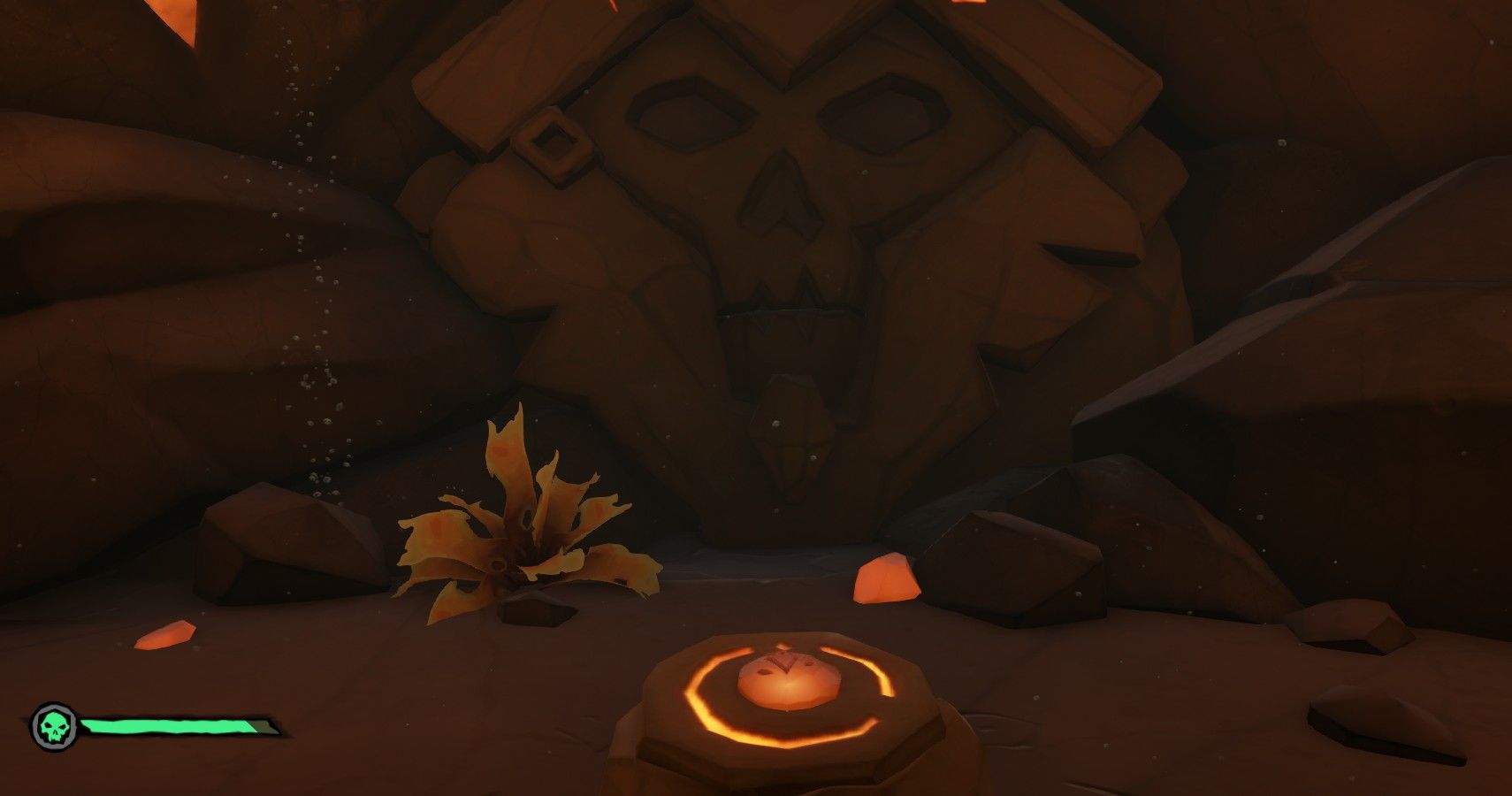 Once lit you’ll see flames light towards the north shore, pointing you in the direction you’ll need to head into to find the Flameheart’s Lair.

Follow them with the Mysterious Key you’ve got and you’ll find a stone door underwater. Use the key to open it up then swim inside to begin your descent into the Heart of Fire. 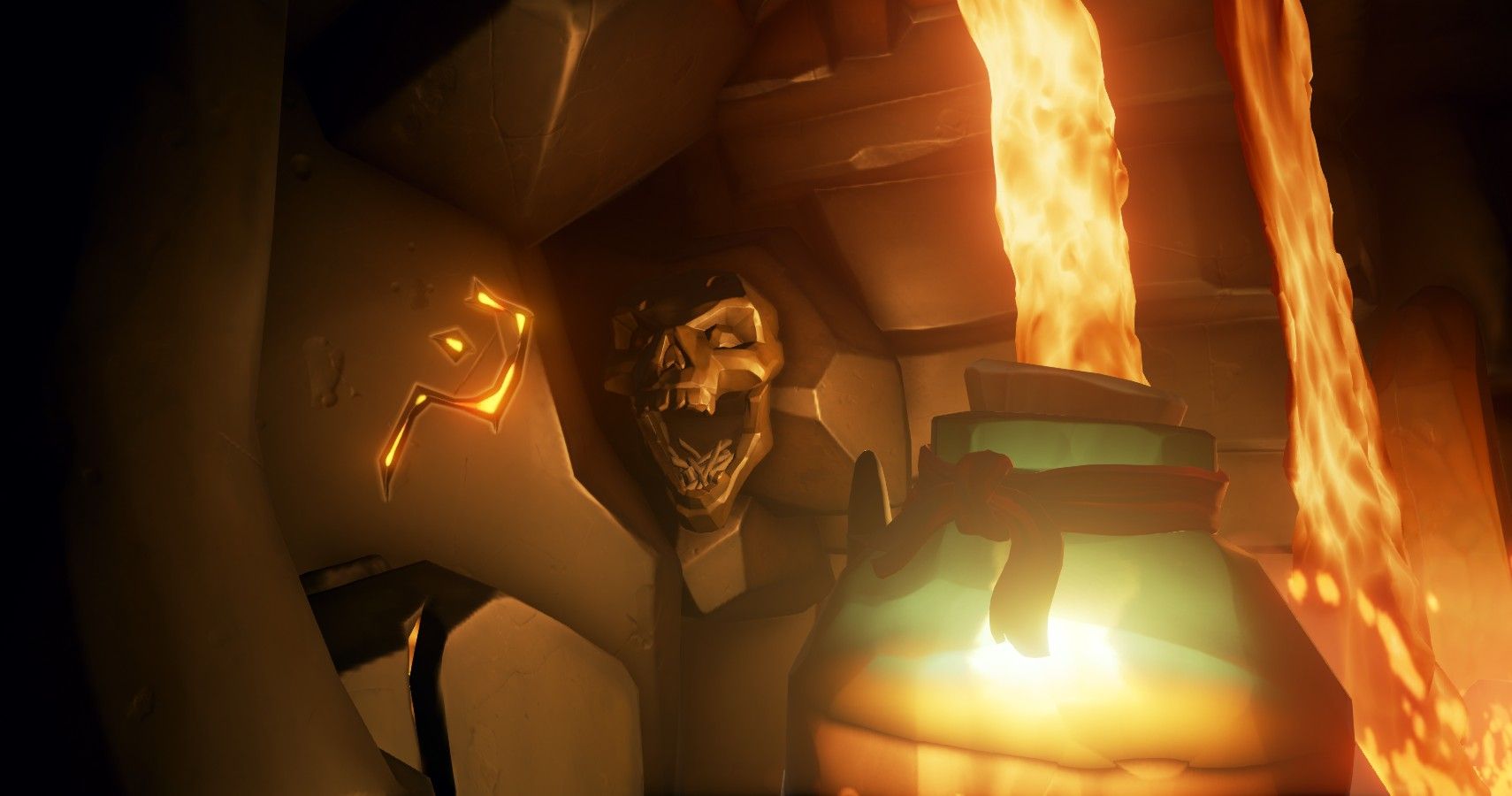 Journeying through the maze is a dangerous endeavor so be on the lookout for swinging traps, stabbing spikes and lava flows that can all kill you in one hit. Flame traps might also stand in your way but these aren’t immediately lethal so you might be able to survive them with some food and jumping into any water that might be around. All the while Flameheart will be doing his best to intimidate and belittle you.

Eventually, you’ll come to a large chamber with three sealed doors. The scattered chests will be filled with firebombs but there won’t be any levers or pressure plates to open the doors. Instead, look for skulls carved into the wall with their mouths open and filled with kindling. Throw a firebomb at these and the corresponding door will open.

Each of the doors will lead to the Ritual Room but they each have a different combination of challenges to overcome first. Crew members don’t have to take the same door but it is advised that they do as some challenges are much easier to overcome with friends. 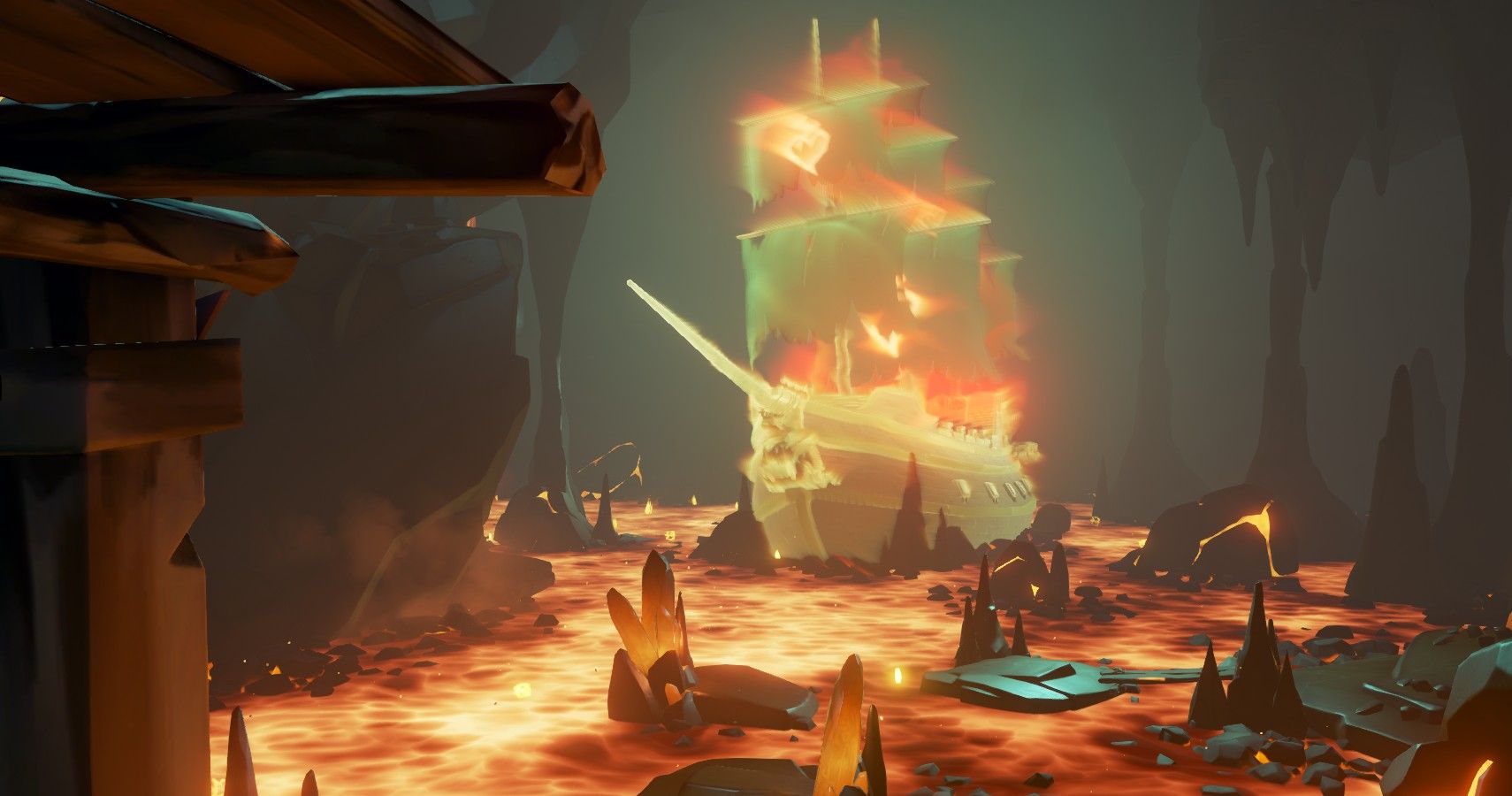 Like the journey so far these traps come in many forms, some instantly deadly and some less so. Look out for the outright murderous ones but take your time when you come into each room to try and assess exactly what threat lies before you.

Most of these are overcome with plain old platforming though so just take your time and make sure to search any barrels for food to restore your health. If you do die, the game will checkpoint you regularly within the cave so you don’t have to worry about spawning all the way back in the ship.

One of the trickiest challenges to overcome requires you to open a door with a pulley or capstan while an endless wave of skeletons crashes against you. With friends, you’ll just have to divvy up the work, but on your own, you’ll have to let the skeletons damage you as you raise the door.

After several rooms, you’ll come into the ritual chamber where the Ashen Dragon sits anchored on a sea of lava. On the other side of the room is Stitcher Jim performing the ritual to summon an Ashen Lord. 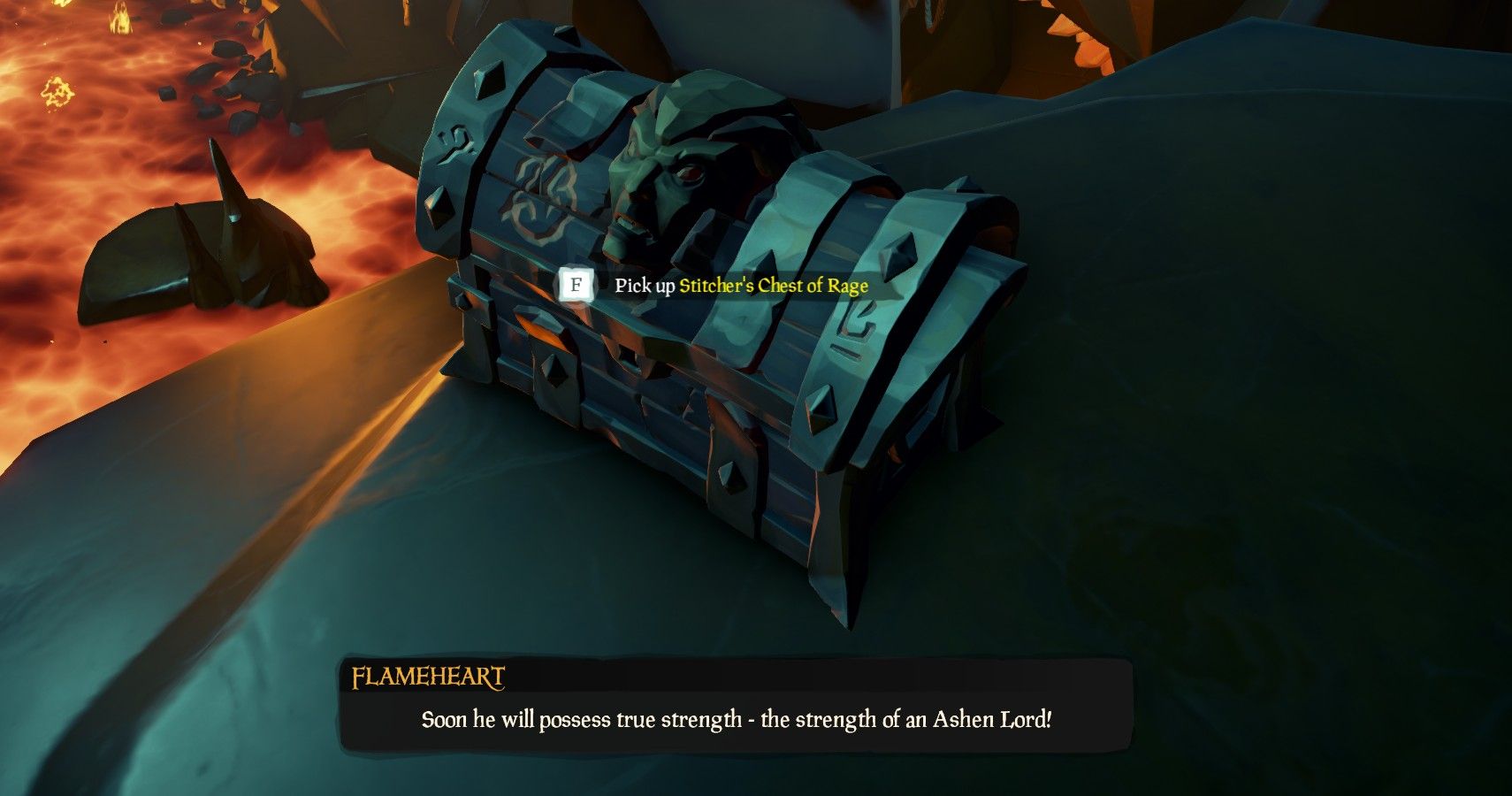 Make your way over by jumping on the rocks just above the lava until you reach the ladder and you’ll hear Stitcher Jim cry out. It seems Flameheart tricked him and instead of summoning an Ashen Lord he is now doomed to become one. He will flee but leave behind the Chest of Rage, and now you’ll have to take it all the way back to the surface so Pendragon can free the souls trapped inside. 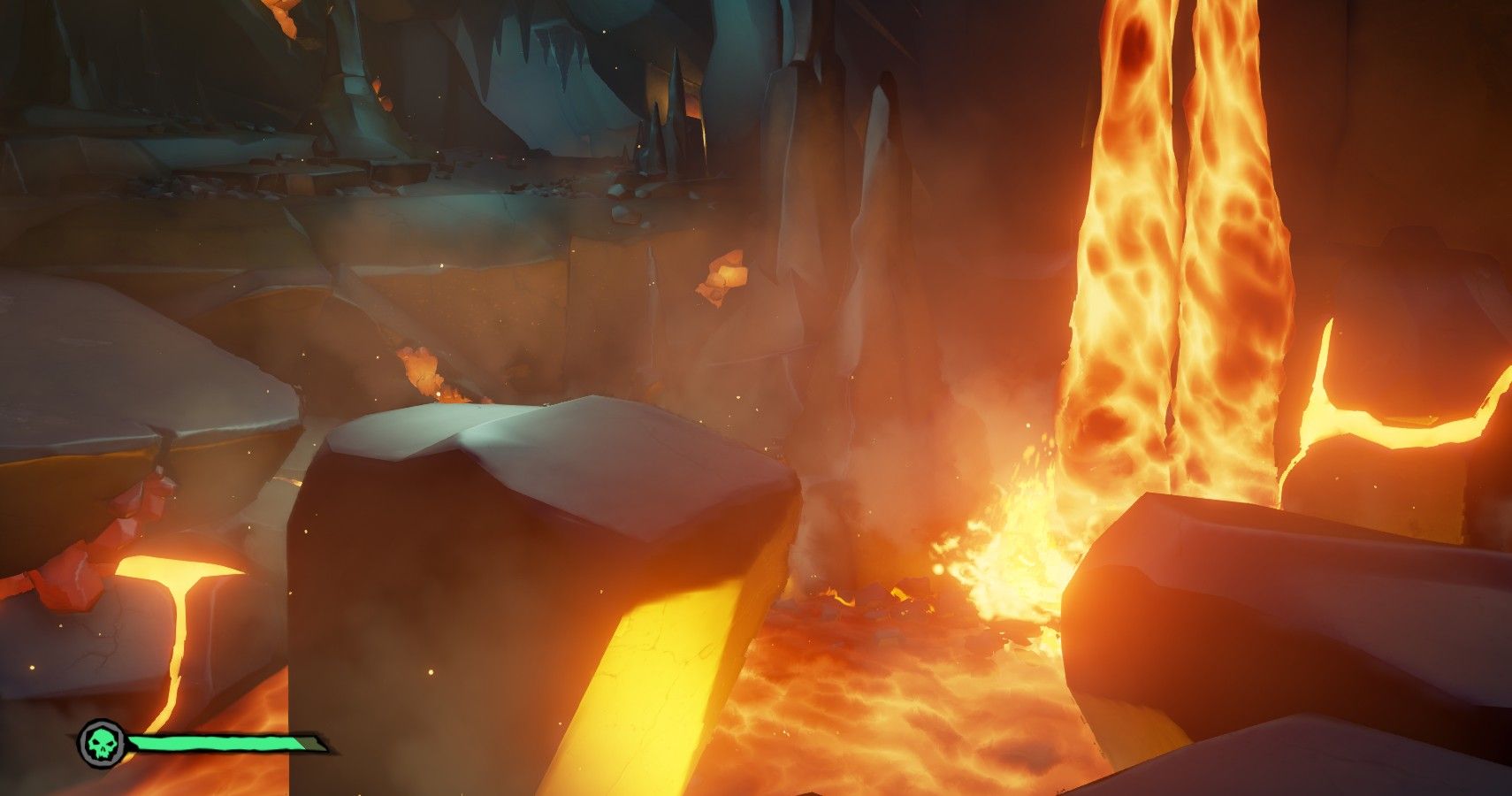 Heading up the surface is a lot like heading down, and there will be a host of fire traps to avoid. But unlike the first journey, you’ll be doing this one with a Chest of Rage.

If you haven’t encountered one of these before, you’re in for a surprise. Every so often these chests will heat up and then explode, dealing fire damage to anyone nearby. Water cools them down so make sure you’re dipping this one into any pools or waterfalls you go past to avoid the blast.

If you can’t find any water and the chest begins to glow just drop it and run. Once the fire has stopped the chest will reset and you can pick it up once more. 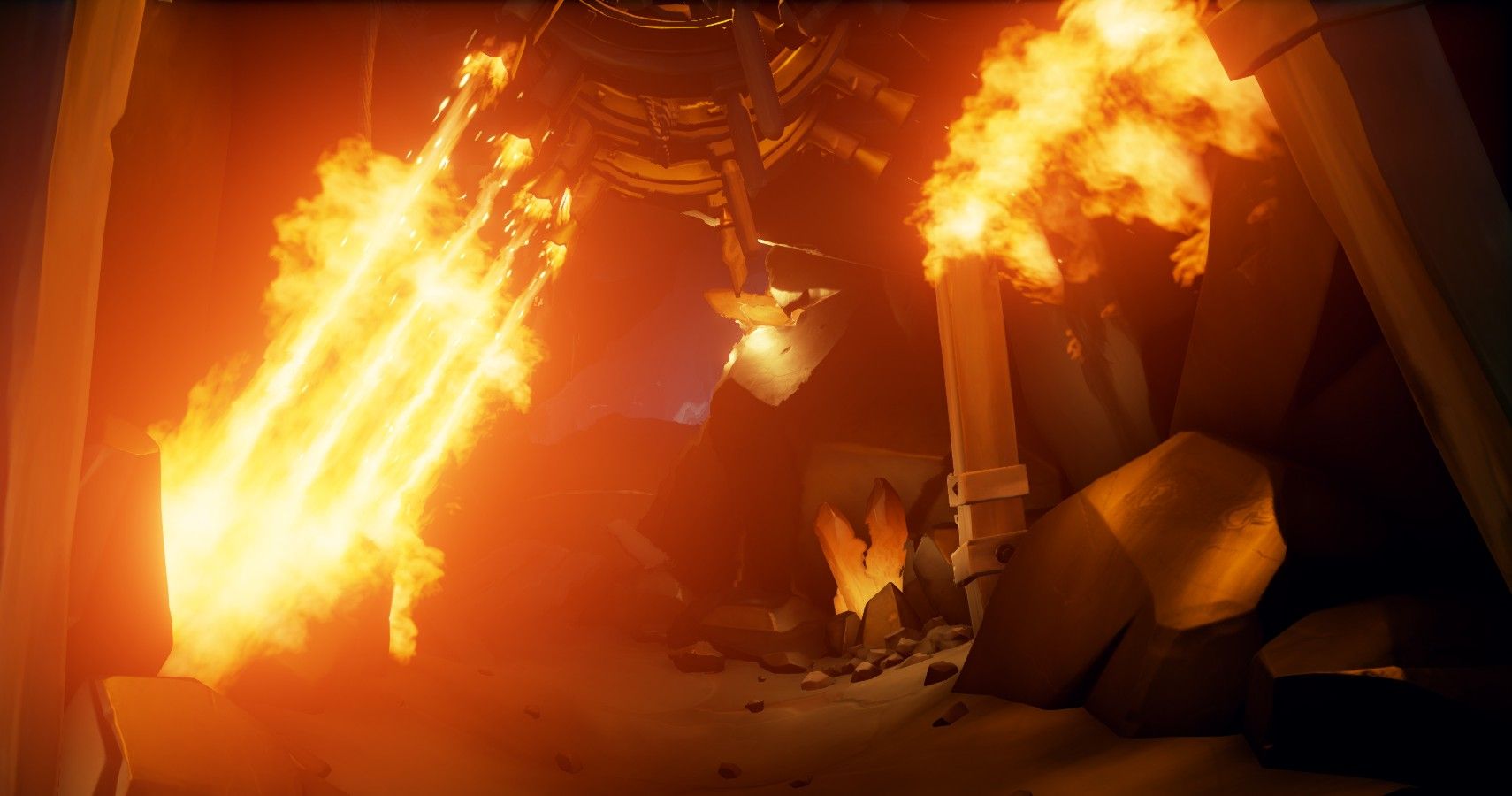 While the fire traps aren’t immediately deadly, they will charge the Chest of Rage faster so do your best to avoid them when you’re carrying it.

They will come in all shapes and sizes so try to work out the pattern of movement before jumping in and hoping for the best. Eventually, though you will reach the surface and find Pendragon waiting for you. 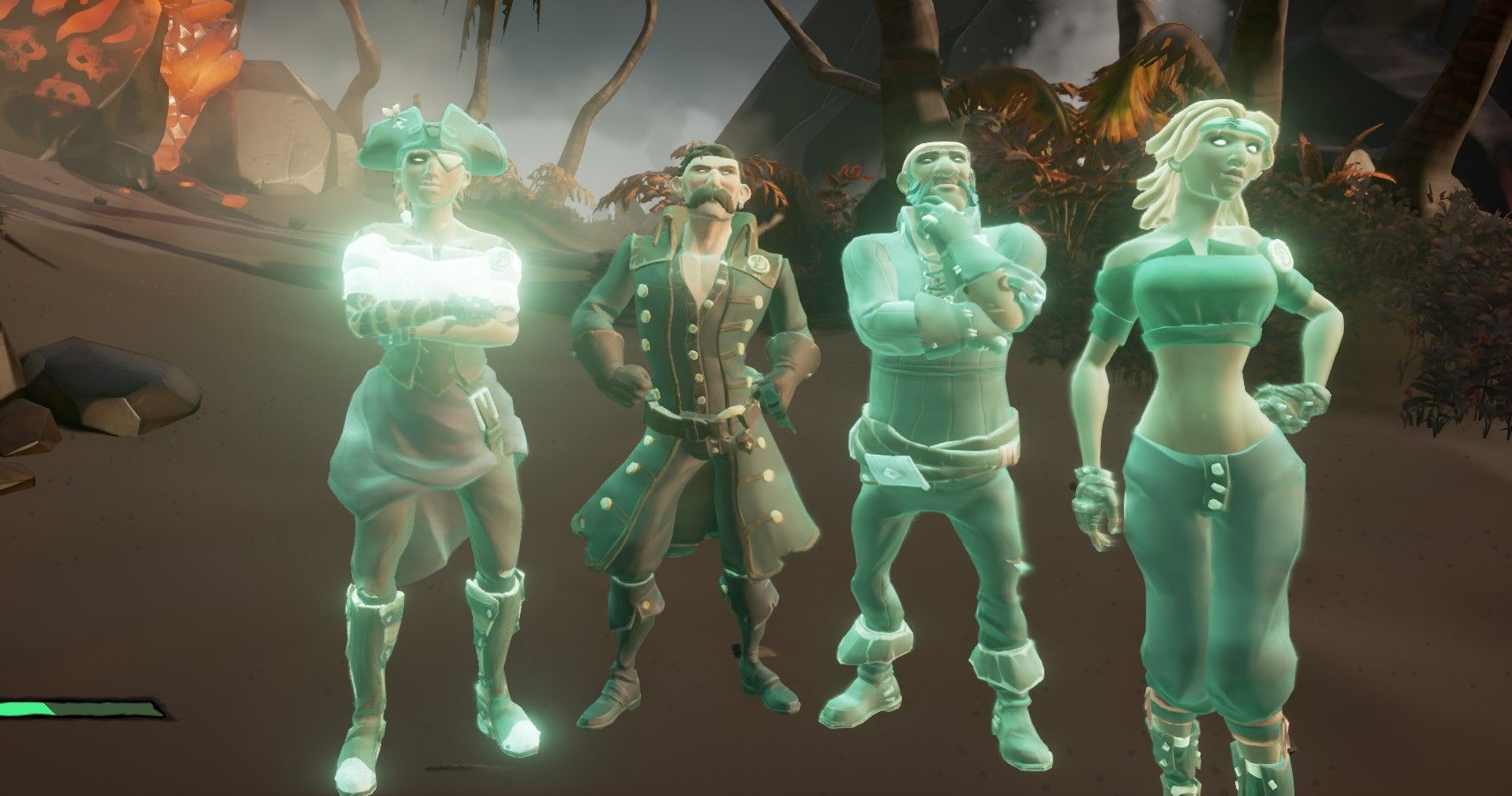 Once you hand over the chest to him, he will use his sword to free the trapped crew and thank you for your effort, completing the tale.

There aren’t any Ashen Lords to fight to complete this Tall Tale but you can find them scattered around the Sea of Thieves thanks to Stitcher Jim’s ritual. You’ll also be rewarded with a cool hull design for your trouble, with the chance to unlock the Ashen Curse for anyone brave enough to complete the commendations.

Next: Sea Of Thieves: How To Customize Your Ship 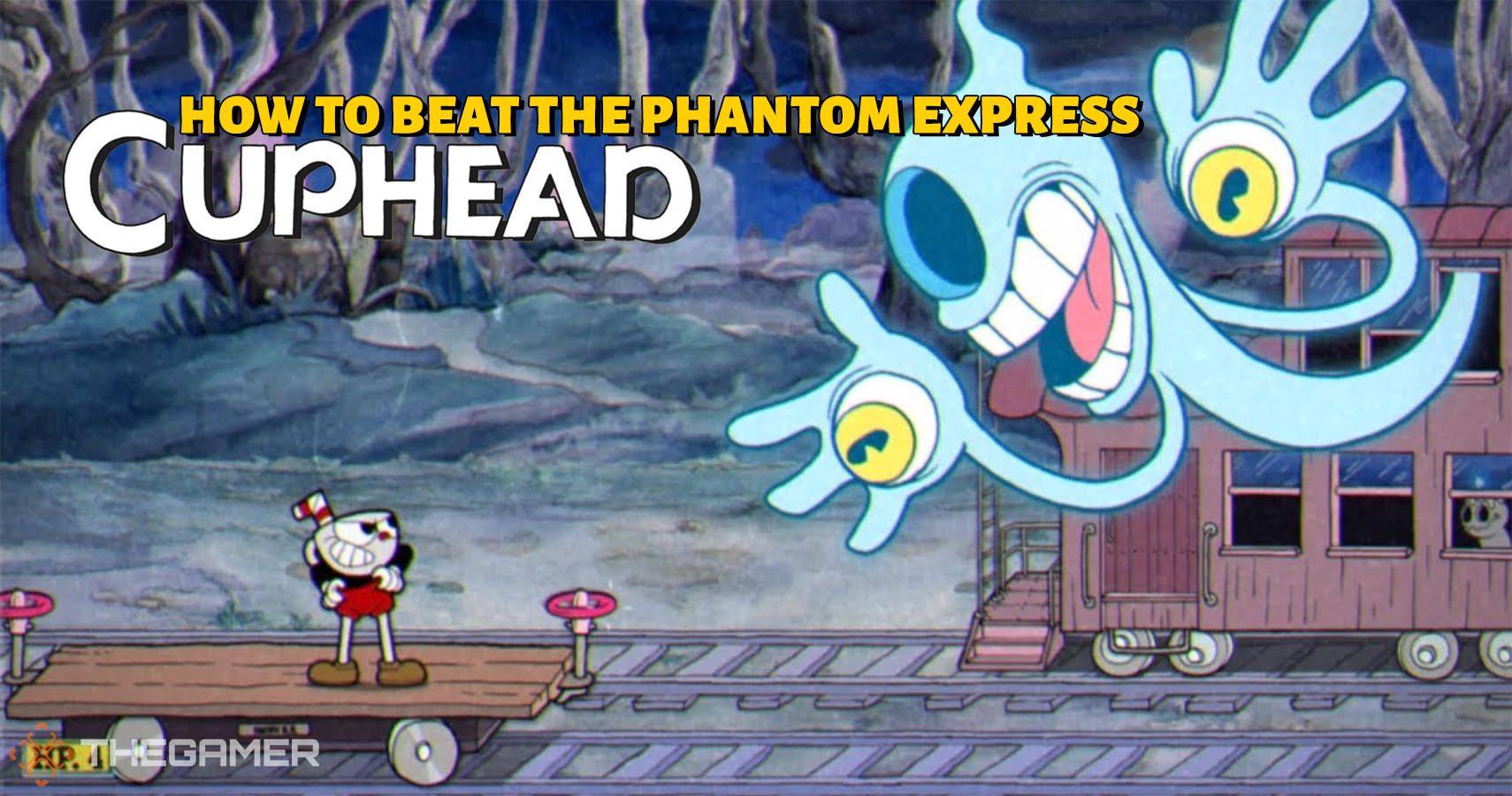