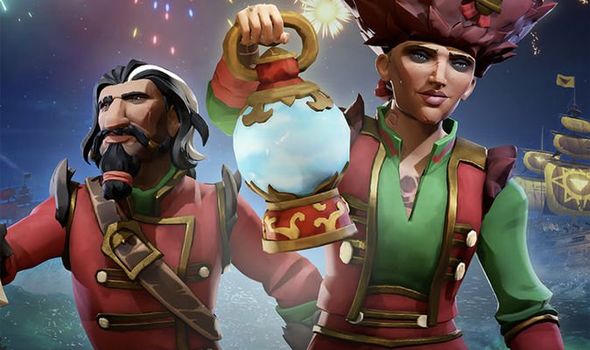 Fans of pirate adventure game Sea of Thieves have been treated to a brand new season of content.

Sea of Thieves Season 5 has a December 2 release date on Xbox Series X/S, Xbox One and PC.

The new season adds a selection of exciting new features, including the ability to bury treasures like a real pirate.

Rare explains more: “At last, you can indulge in that classic element of the pirate fantasy: don’t just dig up treasure, bury your own!

“Almost any item can now be buried, creating a special map that leads back to your loot. Hide your most precious belongings, lay traps for other pirates who manage to steal your Map Bundle or even post a map to the new Quest Board for other treasure seekers to find!

“You’ll earn Renown if other crews find your buried items – will you reward them with a glorious prize, or send them on a wild goose chase?”

Fireworks have also been added to the game, giving players the chance to signal for help or set things off with a bang.

Needless to say, a new season means fresh rewards, which can be unlocked by completing trials and earning Renown.

With server downtime finally at an end, fans can download the Season 5 update. Check out the patch notes below for more information.

• On a Sloop, items dropped from the harpoon when the harpoon is angled into the air will no longer become unreachable.

• Megalodons in pursuit of players should less frequently collide with islands and run aground.

• Gilded Voyages are now only removed from players’ inventories once successfully begun. Any Voyages that fail to be created are now returned to the Voyage inventory.

• While travelling through the Tunnels of the Damned on a Sloop, the ghosts on the lower deck can now be seen using the comfy mattress.

• When ‘Jump Up to Move Up’ is enabled, holding the ‘Swim Up’ button at the same time as reading a journal should no longer cause players to be stuck swimming up when they stop reading.

• The Trident of Dark Tides aim sensitivity settings are now saved between sessions.

• Players resetting their keyboard and controller settings to default will now find that the settings stay reset after restarting the game.

• The Legend of the Cursed Voyage should no longer fail if players place a Forbidden Key into a Sunken Merfolk Statue before migrating to another server.

• When inside a Siren Treasury, if a player dies and returns to the final wave from the Ferry of the Damned, the correct music should continue to play.

• Shrine of Ocean’s Fortune – Loot retrieved from a Sunken Merfolk Statue near the top of the Shrine should no longer float off the platform.

• Shrine of the Coral Tomb – Players can now exit through the Shrine’s entrance.

• Shrine of the Coral Tomb – An ammo box has been added at the entrance to the Shrine.

• Map clues discovered while on Lost Shipments Voyages should no longer become blank after migrating to another server.

• Lost Shipments map clues should no longer appear blank for players joining a session in progress.

• ‘The Sunken Pearl’ – Players should not be able to see the bubbles of other debris through the water while swimming down.

• ‘Captains of the Damned’ – There is now a gate to the Spanish fort that players must open to gain entry.

• ‘Captains of the Damned’ – When exiting the water near the sewer gate, the small steps will no longer cause the player to bounce back into the water.

• ‘Dark Brethren’ – Ambient noises in the Coral Fortress should no longer cut out when moving around in the ascending chamber.

• Players purchasing a Plunder Pass are now awarded with the appropriate level rewards straight away without requiring Renown to be earned.

• The page-turning animation should now loop correctly when using the Good Book Emote.

• Following navigation through the Tunnels of the Damned, ranged weapons now correctly display their bullet trails.

• Scrolls should now play paper audio effects when being raised and turned.

• Water audio effects when the Kraken is leaving should no longer stop prematurely.

• When a player’s ship is on fire, dousing the fire should now no longer cause the flames to disappear immediately but to go out gradually.

• Players should no longer be able to see through fog when standing next to a ship that is on fire.

• The friendly merfolk holding a crew’s treasure should now use the appropriate audio effects.

• The handles on the Legendary Fishing Rod and the Silver Blade Fishing Rod should no longer become detached when used.

• Fishing rods now should now have a fishing line colour that better matches the colour of the line in the spool.

• The Victorious Sea Dog Blunderbuss should no longer clip through the camera when aiming down the sights.

• The wall next to the Sloop’s new bed now takes impact from weapon damage.

• Navigating up the wooden ramps on top of Thieves’ Haven should no longer cause players to slide off.

• Players should no longer be launched into the air by walking into a wooden gate on Sailor’s Knot Stronghold.

• The Mysterious Stranger’s Tankard should no longer become visible floating in mid-air when a player stands too close.

• The tooltip for collecting crates from the Merchant Alliance now reads ‘Take’ instead of ‘Redeem’.

• The text description in the Events panel should no longer be cut off when the language is set to Russian or Japanese.

• Text should no longer spill outside the box when naming pets with the language set to Chinese, Korean or Japanese.

• Server stability has been improved, reducing scenarios where crews are removed from a game session.

• Improvements to how mouse position is captured within the title to improve Touch Controls when played on xCloud.

• Improved responsiveness of radial menus on lower-spec hardware. Following this change, players will find any custom keybinds for radial menus have been reset.