Five years ago, Patrice Désilets started up Panache, his own studio in the heart of Montreal. As the original creative director of Assassin’s Creed, the gaming world has been excited about what he’d cook up next. Originally, Désilets hoped to work on 1666: Amsterdam, a game he had conceived at THQ and was later acquired by Ubisoft, but after a long legal battle to regain his legal rights to the project (which he finally did), the title is yet to reach the development phase.

Now, Panache is wrapping up the studio’s first release, Ancestors: The Humankind Odyssey which is releasing later this year. Taking place in a prehistoric age before man, Ancestors tasks you with trying to survive as an ape and witnessing evolution happen right before your eyes.

Désilets says the idea was designed around the team’s capacity. At first, it felt like a simpler approach than Assassin’s Creed II’s Italian Renaissance, but Ancestors has matured since that initial concept and morphed into something larger and more ambitious.

We recently traveled to Montreal to try the action/adventure survival game ourselves. Here are six things you should know about it. 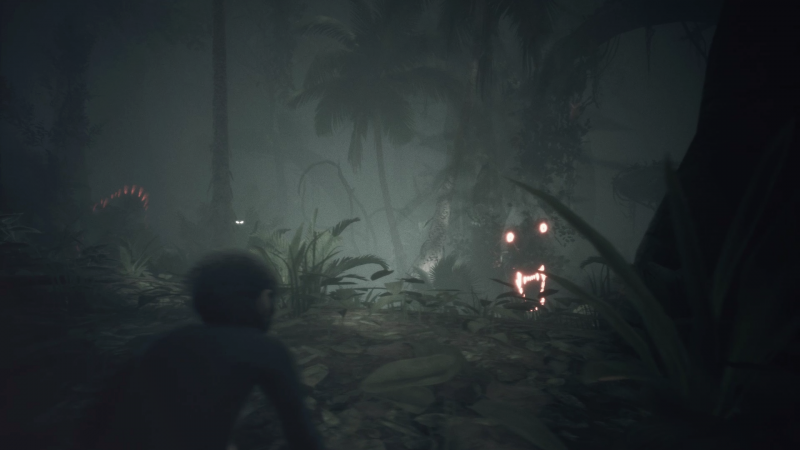 Survival Is Up To You, But It Isn’t Easy

Because Ancestors is a survival game, you have to keep tabs on your health. You need to eat, drink, and sleep adequately otherwise you’ll die. You can die or get hurt in a multitude of ways. If you fall from high up, you risk breaking some bones. If you’re attacked by a predator, you could bleed out. Even trying a new type of food for the first time, like stealing an egg from a bird’s nest, can leave your character sick. Luckily, later in the game you can switch between characters, and the skills and knowledge your ape learns is available for your whole clan. 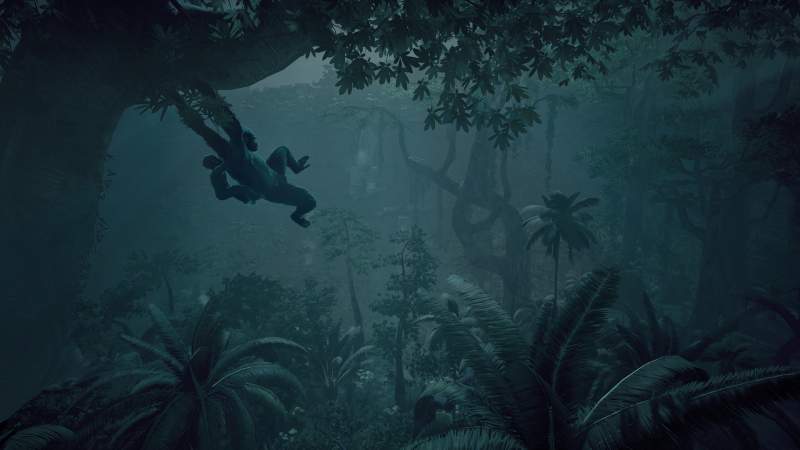 Climbing Is Reminiscent Of Assassin’s Creed

It’s unsurprising Désilets’ new game has some mechanics reminiscent of Assassin’s Creed. This is particularly apparent with climbing in Ancestors. Although the controls still need tweaking and were a little clumsy during my time with the demo, it was nonetheless liberating to grab onto branches and swing across the jungle or climb atop high cliffs to reach new areas. 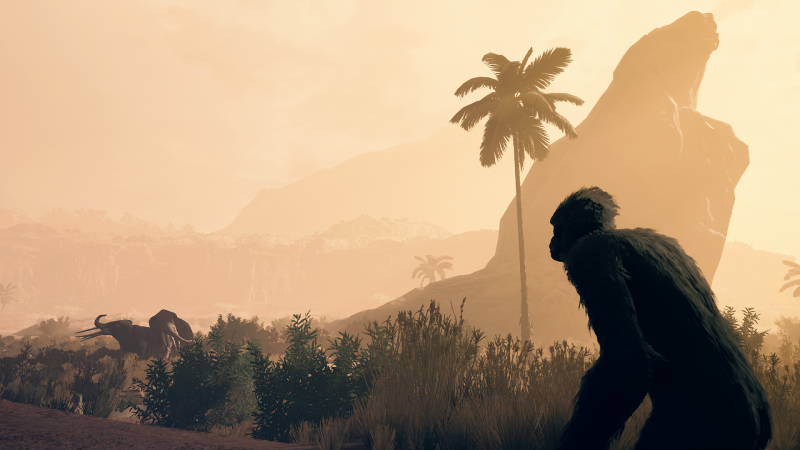 Exploration Is Vast, Taking You All Over Africa

Ancestors begins in an African jungle, but as you progress, new environments open up to you. One of these places is the savannah, a gorgeous and sprawling area with new wildlife like elephants. Once you unlock an area, you can start a new game from that location by selecting it on the main menu before launching your campaign.

Exploration is a big part of Ancestors, but delving into unknown lands can be dangerous. You can find ways to build tools to protect yourself, like makeshift weapons to use on poisonous snakes, boars, crocodiles, and more. However, fear may keep you from exploring to your heart’s content. When a predator is after you or when you enter a dangerous area, you activate what’s called a “Fear Zone.” The visuals turn hazy and you become at risk for hysteria unless you can make your way to the “light,” which is a literal glowing ball of light, in time. 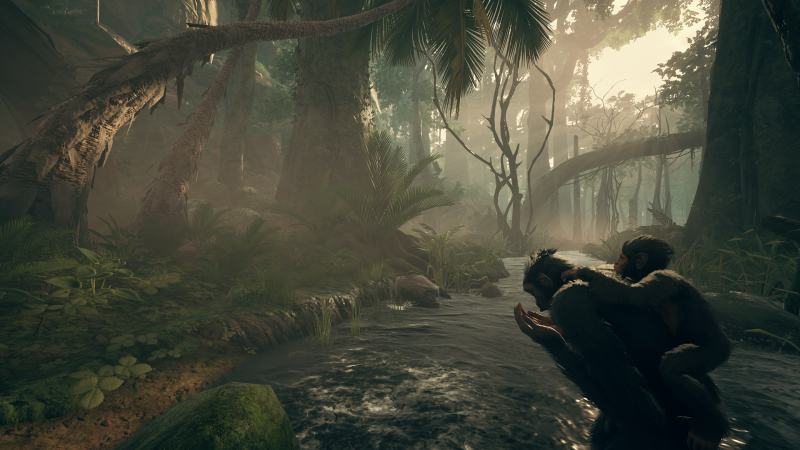 “The final species you play as has not much hair, walks on two feet, and starts to resemble more of a human,” Désilets says.

You watch the group of apes you form (your clans) through the years grow and expand. You do this by inviting outsider apes to join or by having couples already in your clan procreate.

The skills you learn, which are discovered as you explore and unlocked on a skill tree menu while sleeping, transcend different generations. Désilets says this can be done by “locking the abilities forever” on the skill tree screen. 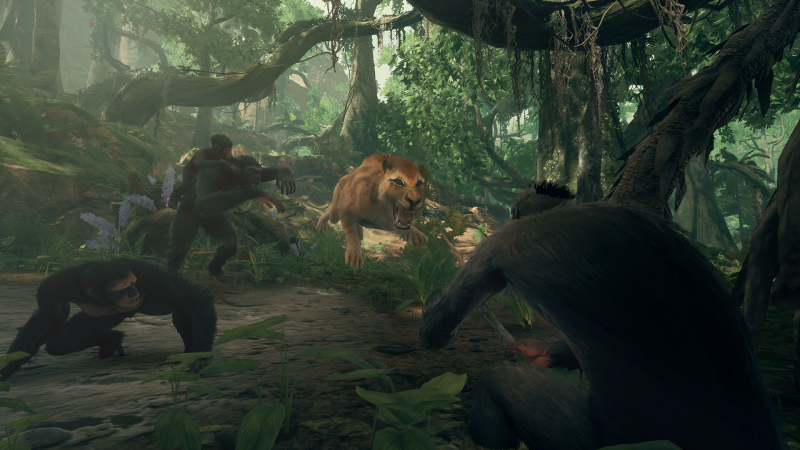 Depending on how you want to play, Ancestors provides three game modes: First Time Experience, Survivor, and Custom.

“When people play the actual game, Survival and Custom will be locked at first. The more you play, the more you will unlock,” Désilets says. “Survival Mode will drop you somewhere in the map and [task you with] surviving alone. And with Custom, you can go back to someplace you already visited and start the game from there with the number of clan members that you want.”

As for First Time Experience, that’s the standard mode that begins with tutorial objectives to get you started. 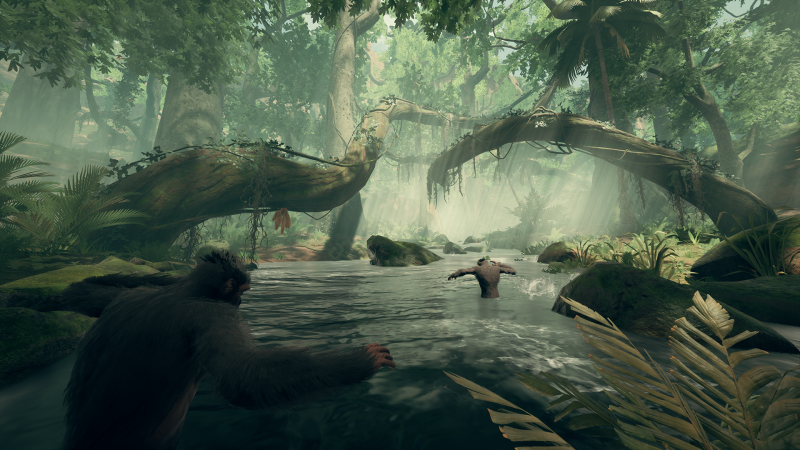 It’s Rough Around The Edges

Ancestors is a fascinating and ambitious idea, but the gameplay so far isn’t holding up in the ways I hoped. The controls don’t feel intuitive, such as a clumsy way to slow down from a run without accidentally jumping midway. Climbing was fun but difficult, and I often missed the branches I was aiming for. The world itself feels a bit barren, but as Désilets says this is a game about “epiphanies,” and it’s possible I just didn’t come across the different combinations and tool-making methods during my demo.

But, having spent a couple hours with the game, it felt as though there were too few tutorials and not enough guidance offered to the player that would lead them towards compelling content. I often felt lost rather than intrigued.

Nevertheless, with its strong concept, I’m curious to see how Ancestors shapes up when it releases on digital stores, for $39.99, later this year.

Stay tuned for more coverage next week, where we’ll show off some gameplay from our hands-on session with the game.