In the northern part of the Ancient Ruins, Slime Rancher players can find a teleporter that brings them to the Glass Desert. This remote region has many varieties of slimes and food available, but many of them cannot be accessed until the player restores the Oases scattered throughout. Bringing greenery back to the Glass Desert will make it an especially useful location to visit – especially once you've constructed some teleporters of your own and can return at will.

We've gathered everything you need to know about the Oases in one place. With this guide, you'll have an operation up and running in the Glass Desert in no time at all!

Preparation For Travelling To The Glass Desert 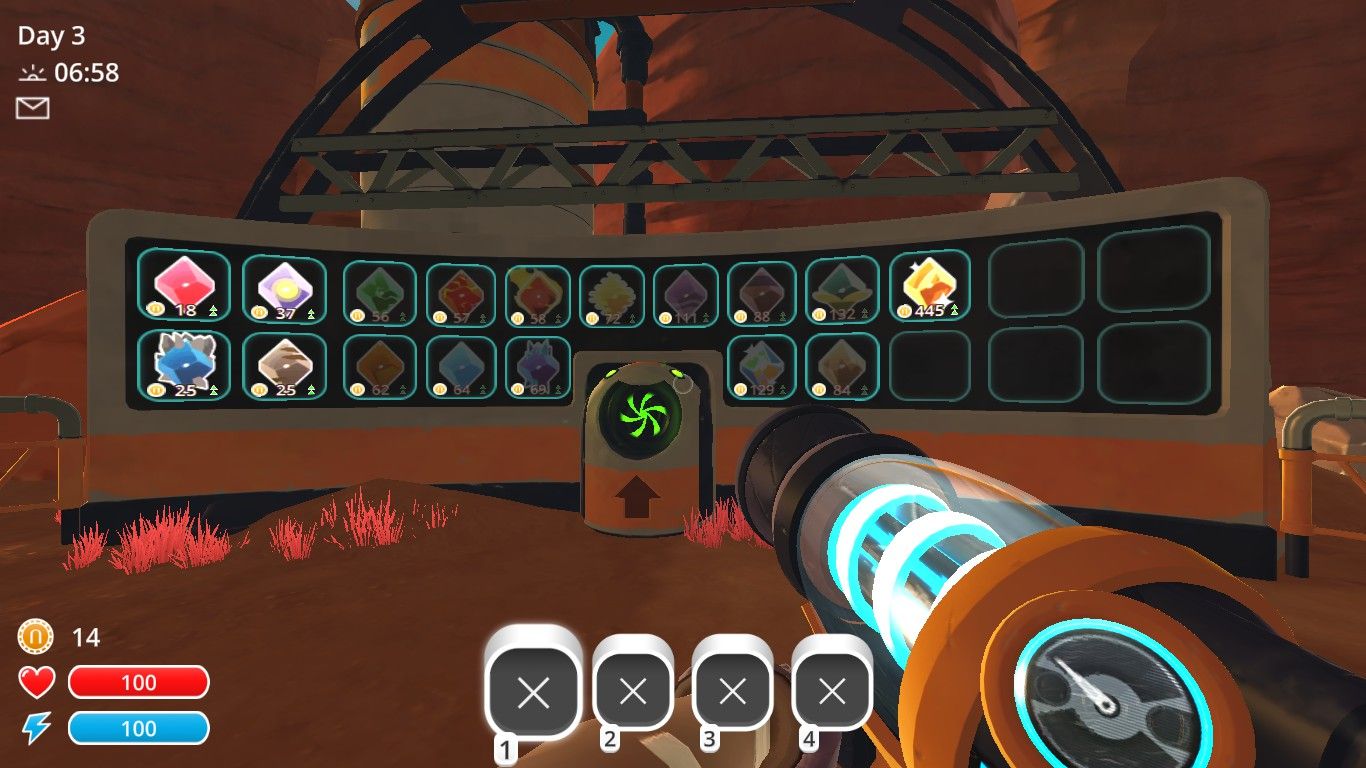 Before you travel to the Glass Desert, you'll need two key pieces of equipment.

Both upgrades are available for purchase from the beginning of the game and cost 350 Newbucks each, so you'll need to spend 700 Newbucks on equipment to be able to restore every Oasis.

Additionally, you'll also want to bring three Rock Slime plorts along with you. These will be used to activate the easternmost fountain. Rock Slimes are very common, so you should have little trouble farming the plorts. If push comes to shove, you can find Rock Slimes in the Ancient Ruins before you teleport to the Glass Desert for the first time.

Lastly, there are two Slime Gates in the Glass Desert, so being prepared with a pair of Slime Keys will make the job a little easier. The Dervish Gordo in this area has a Slime Key if you need one.

How To Get Ancient Water 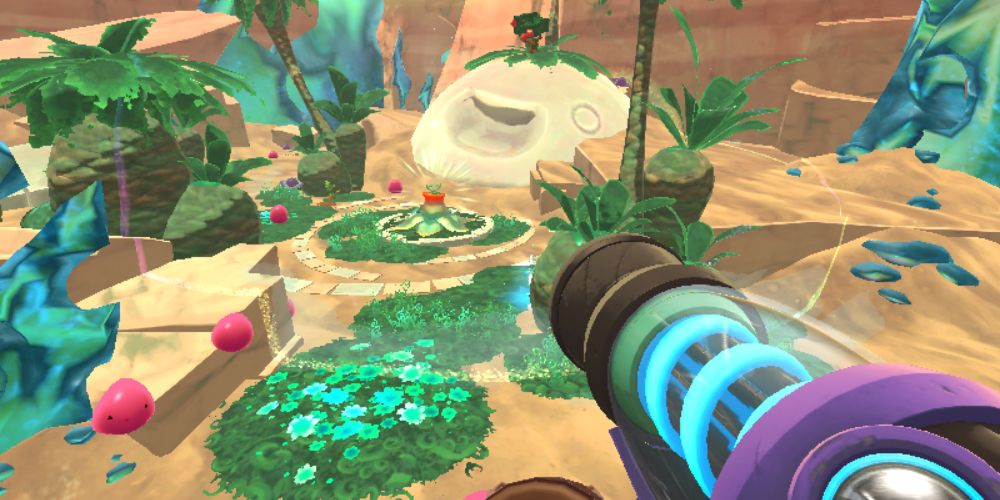 An Oasis requires a special type of water to regrow. To access Ancient Water, you'll need to get the Glass Desert's fountains flowing. There are four fountains in the area, each with three slime statues nearby. Offering plorts of the correct slime type to all three statues will activate the fountain. Note that all but one of the required plorts are harvested from slimes exclusive to the Glass Desert, so you'll need to restore the Oases in a specific order to get the best results.

Once a fountain is flowing, you can vacuum up its water if you have the Water Tank upgrade. Doing so will fill your tank with Ancient Water, causing your tank meter to flash in rainbow colors. Ancient Water functions identically to normal water, with two key differences; firstly, it destroys a Tarr on contact, even at night. Secondly, dousing a flower bud in Ancient Water causes it to grow into an Oasis. Ancient Water loses its magical properties thirty seconds after being gathered into your tank, so you'll need to act fast to restore your target Oasis.

It's also worth noting that Ancient Water is never depleted from your tank, no matter how much you use. When the thirty seconds expire, your Water Tank will always revert to being full. This makes the fountains a great way to keep your tank topped up while journeying through the Glass Desert. 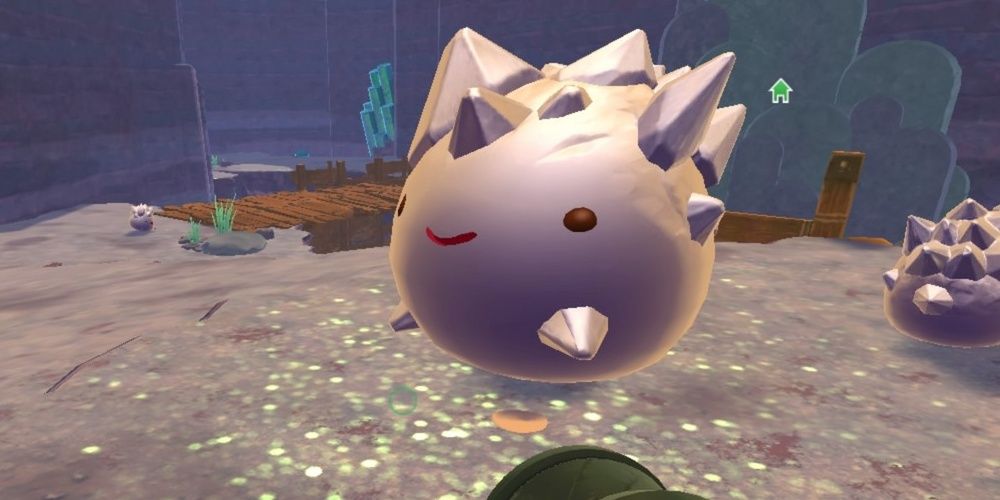 Upon reaching the Glass Desert via the teleporter, follow the path until you reach the Tangle Gordo – it will be inside a tall structure near the very center of the desert. Popping the Gordo will save you some time later and give you access to a one-way teleporter, but isn't strictly necessary.

Once the Tangle Gordo's house is in sight, look to your right for a tunnel that leads to some sunken ruins. Proceed straight down the tunnel until you come to a wall, then look up; you should see the first Rock Slime statue on a ledge atop the wall. Fire a Rock plort into its mouth, then turn around. The second statue will be to your right and may require a little bit of backtracking to see. Put a Rock plort into its mouth, then look around the corner to your left and do the same for the third statue. 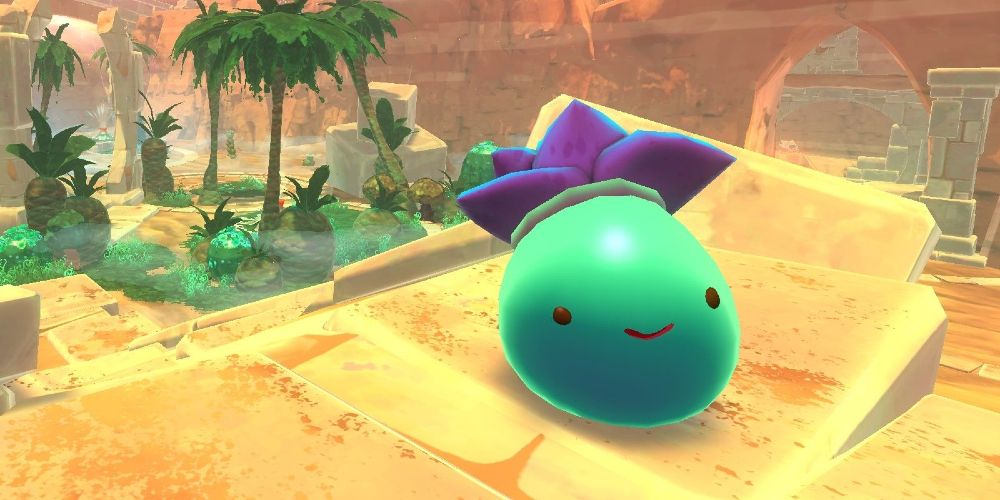 Once you've activated the Rock Slime fountain and its nearby Oases, you'll be able to gather plorts from Tangle, Mosaic, and Dervish Slimes.

Tangle Slimes are the most plentiful at this point, especially if you popped the Tangle Gordo, so once you have three Tangle plorts return to the main entrance of the Glass Desert. There, look around for a large statue of a slime. Tucked behind it on the left side is a smaller Tangle Slime statue; place a Tangle plort in its mouth and keep walking along the path in front of you. When you see an Oasis bud, look to your left for another statue and feed it a Tangle plort. Now, return to the large statue and use the Jetpack to reach the ruins built into the cliff above it – you'll find the third Tangle Slime statue there.

Once it has been offered a Tangle plort, the fountain in this area will activate in the next room over. It can be reached either by using the Jetpack to fly around the outer perimeter of the cliff or just flying over the roof to the other side.

Related: Slime Rancher – Where To Get Slime KeysMosaic Slime Fountain And Oasis Locations 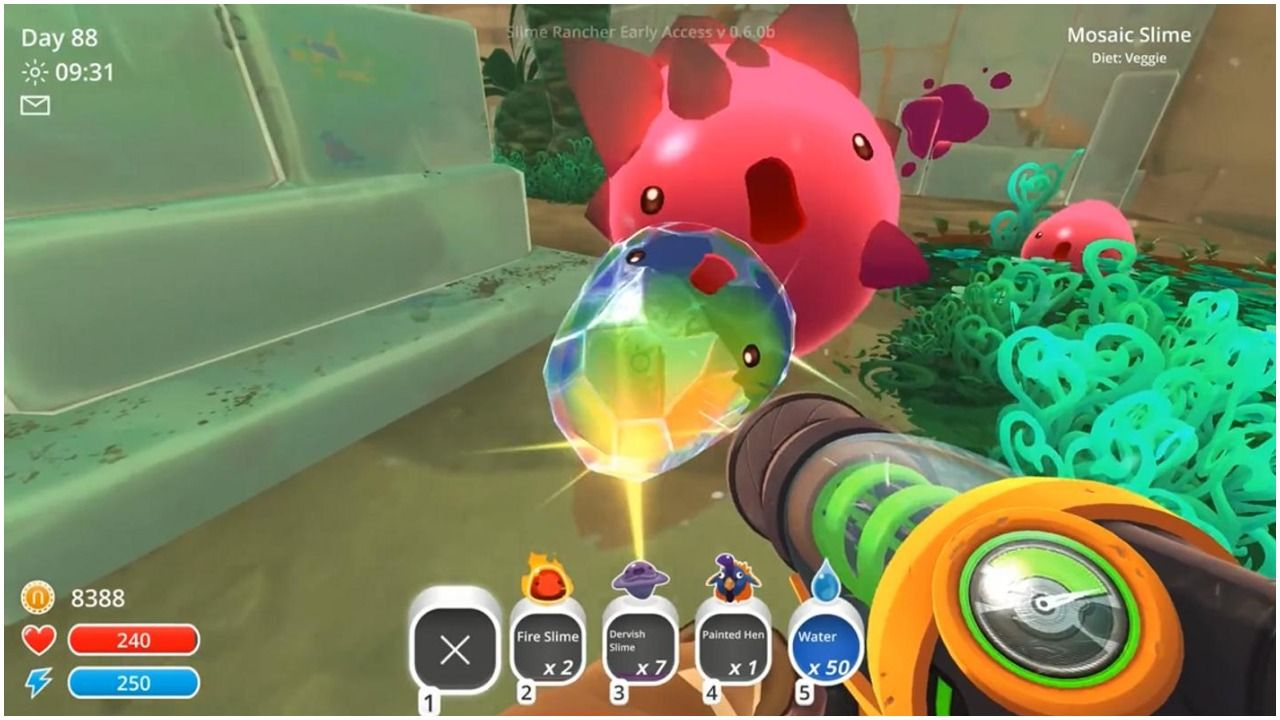 In addition to Mosaic plorts, you'll need a Slime Key to reach all of the statues for the western fountain. If you don't have one, climb to the top of the ruins where the Tangle Slime fountain is located and use the Jetpack to fly to the opposite clifftop. There, you'll find the Dervish Gordo. Feed it fruit until it pops (Prickle Pears are its favorite) and collect the Slime Key it drops.

Once you have a Slime Key in hand, return to the Tangle Gordo's house and walk past it on the left. Use the Slime Key to open the gate you find in the wall. Once you're through, immediately turn left and use the Jetpack to fly across the chasm. There will be a Mosaic Slime statue in an alcove to your right; feed it a Mosaic plort then backtrack, following the trail to the left into the ruins. When you come to a room with a large hole in the floor, look up and to your left; the next Mosaic Slime statue is sitting on top of the wall in the corner of the room. It is recommended that you bring extra Mosaic plorts since this statue can be hard to hit with your first shot.

Once the statue on top of the wall is activated, take a look down the big hold in the middle of the floor. You should see the last Mosaic statue on a ledge below. You may be able to hit it from where you are, but you should use the Jetpack to carefully lower yourself to the opposite ledge for a better angle. Not only will this prevent you from potentially wasting plorts, but it also brings you to the fountain, which is directly opposite the third statue in the room below. 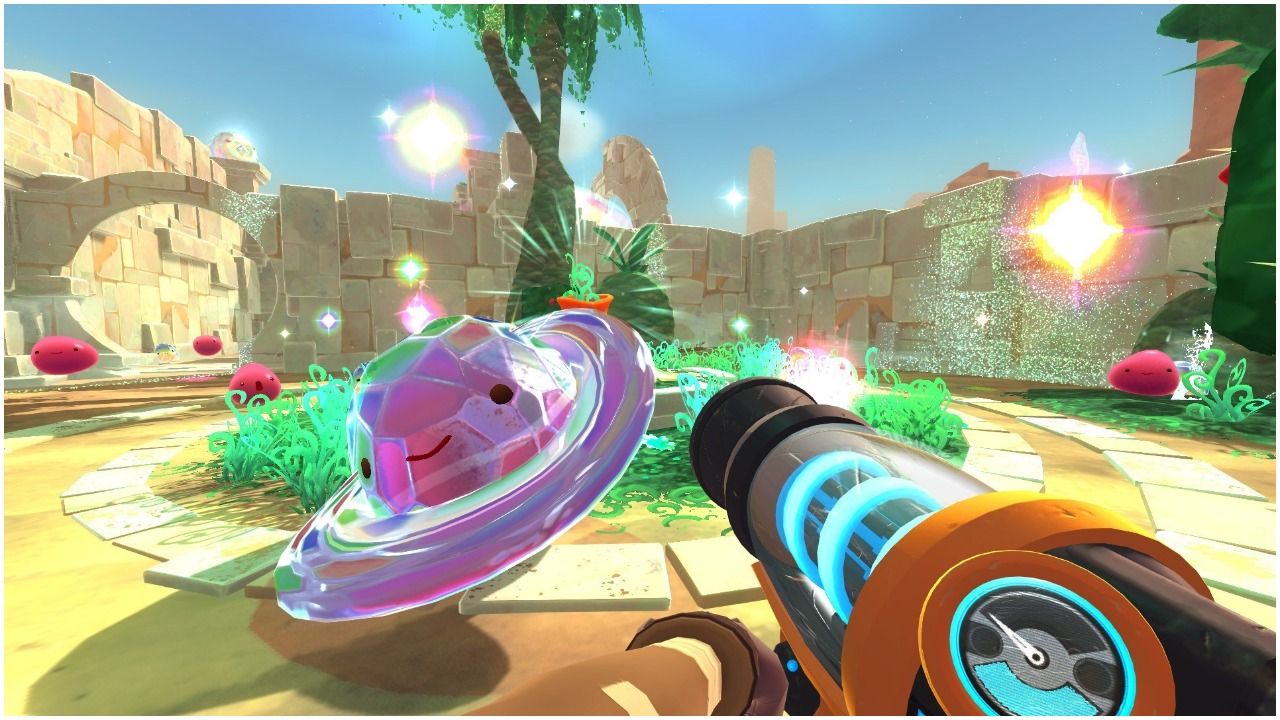 After renewing the Oasis in the Caverns from the Mosaic fountain, you should see a round tunnel ahead of you. Follow the tunnel until you come to a chamber with a large slime statue. Use the Jetpack to climb onto the platform on the left (and don't forget the treasure pod underneath it!). You'll see another tunnel – travel to the end, watching out for holes in the floor.

Once you're back outside, immediately turn right and look for another tunnel leading back into the ruins. Follow it until it bears left; after the turn, you'll find the first Dervish Slime statue. Feed it a Dervish plort, then use the Jetpack to climb up to the surface level.

Once you're in the main area of the ruins, climb the eastern wall using the Jetpack to find the next Dervish statue and make your offering. After that, go to the northwestern chamber, where you'll find the as-yet-inactive fountain. Use the Jetpack to reach the highest possible point in this room and look for the Dervish statue in one of the high corners. Once all three statues have been given Dervish plorts, the fountain will activate.