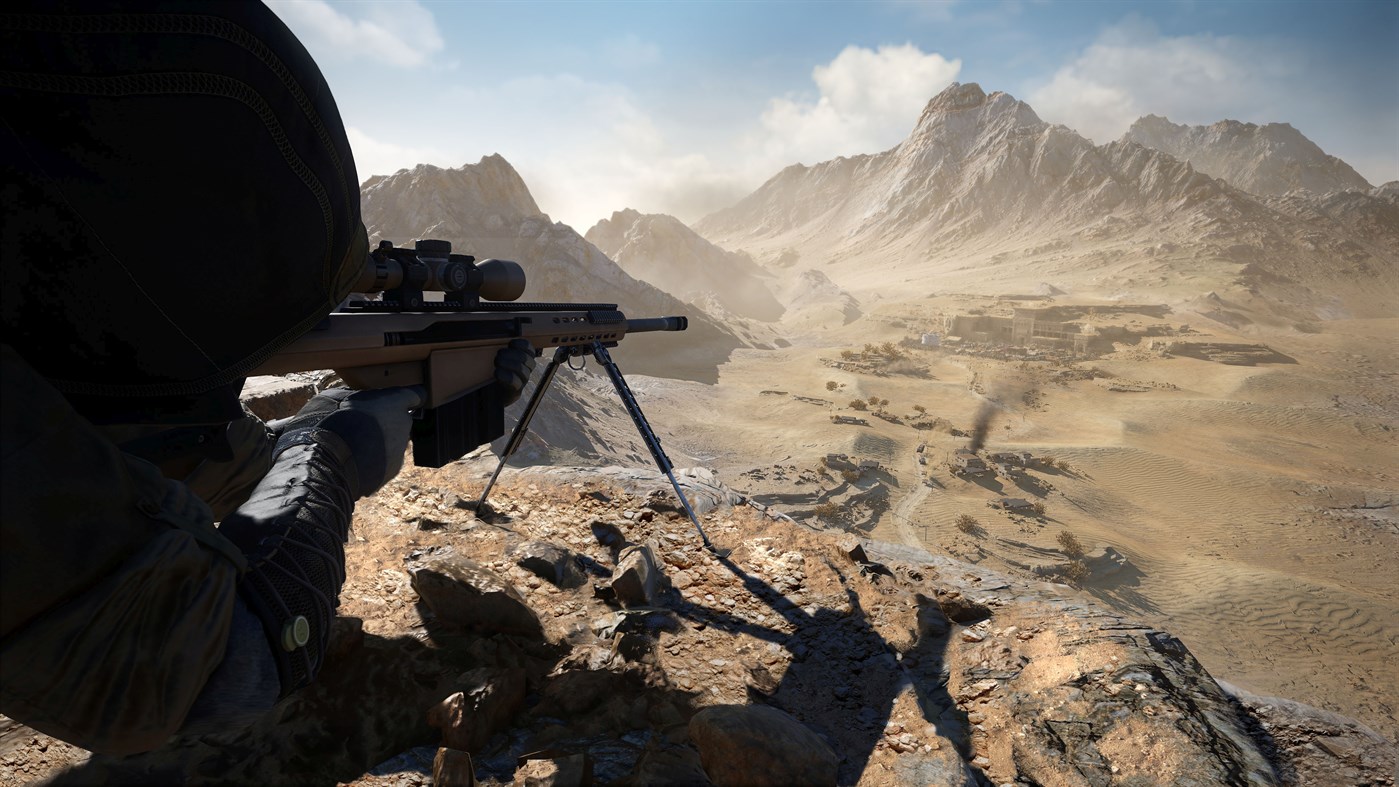 The pleasures of sniping oblivious bad guys from a mile away are simulated once again for the latest Sniper: Ghost Warrior game.

Since 2008, the Sniper: Ghost Warrior series has been steadily churning out new entries, none of which trouble the upper echelons of Metacritic ratings. Even though they fall well short of classic status, they all did one thing right: if you had an itch to simulate shooting people from a long distance, the sniping at least has been consistently competent.

Sniper Ghost Warrior Contracts 2, named with the same panache as High School Musical: The Musical: The Series, is very much in line with the mores of its franchise. It’s set in a fictional Middle Eastern dictatorship whose newly minted autocrat has decided to invade a neighbouring country. That leaves the world no choice but to send in one man and his long gun.

You are that man, and your character is a completely standard issue, gritted teeth American military type who growls humourless, but mercifully succinct, dialogue. Luckily, your equivalent to Solid Snake’s Colonel Campbell is a redoubtable Yorkshireman, whose radio-based direction and advice inject at least a modicum of personality to proceedings.

The scene set, you’re helicoptered, completely alone, into the fictional country of Kuamar, ready to take down its tyrannical leader and her network of warlords and financiers. The campaign is split into discrete contracts, each of which has you tracking down and assassinating members of the network. As well as killing people – sorry, neutralising targets – you’ll also sabotage equipment, blow up vehicles, and down communication systems. Doing all that naturally requires more than just bullets.

To assist in your quiet trail of destruction, you unlock a litany of gadgets, many of which are quite fun to use, even if none turns out to be exactly essential. A drone lets you spot enemies, hack CCTV systems, and fire poison darts; a remote turret can be used for sync shots or automatically popping the head of anyone who spots you; and there’s also a variety of detectors, anti-personnel mines, and special ammunition for your gun.

The latter includes armour piercing rounds for taking out heavies, EMP, lures, and agile bullets, which self-guide and don’t require you to compensate for gravity or wind. You buy all these using currency earned by completing additional goals in each mission, which turn out to be the most satisfying and challenging parts of the game. These range from killing everyone in a particular camp without raising the alarm, to finishing your target in various offbeat ways.

This is almost reminiscent of Hitman, in the way you can use pieces of scenery or combinations of different ammunition, to execute your mark and it adds a welcome sense of variety, something that can easily go missing when a game has such a singular focus. That’s also where things start to go awry for Contracts 2, whose meat and potatoes is undoubtedly the long-range shot.

The game’s high points are missions where you need to take out targets a kilometre or more away. Doing that involves careful observation through binoculars, tagging enemies, looking for movement patterns, and spotting potential props to use while taking out each area’s arch-baddie. It’s a slow, methodical business that requires patience, as well as skill in lining up and taking each shot.

Unfortunately, these engagements are interspersed with shorter range battles, which neatly spotlight the game’s weaknesses. Dropping the unhurried, analytical sniping in favour of faster paced action using your automatic rifle and silenced pistol highlights the flatness of the gunplay and all-round absence of finesse. This is no first person shooter, despite featuring guns and using that viewpoint, it’s a sniper game and moments when you’re not taking enemies out at range feel clumsily ill-conceived.

Traversal is similarly hampered by a lack of polish, whether you’re flailing about in water or trying to line up its mildly pernickety climbing prompt. Such floundering regularly gets you spotted and killed, although the game’s automatic, and normally pretty generous, auto-save system means you’ll rarely find yourself set back too far.

As well as gadgets and weapon upgrades there are also multiple skill trees that add abilities like being able to motor the wrong way up ziplines or enhance your stealth, camouflage, and ammo capacity. None of them are game changers but some do at least make a noticeable difference to your quality of life as you progress through the long and often complex open world missions.

At its best, Contracts 2’s sprawling levels, full of multiple routes, side quests, places to hide, and sniper’s nests are like puzzles to be unravelled with whatever kit you’ve brought with you. The killcam may lack the finesse of Sniper Elite but it does the job, as does CryEngine’s crisp depiction of desert scenery.

It’s a shame that ethos is undermined by a general lack of polish and frequent forays into close combat. Whether creeping up and stabbing enemies in the neck or taking pot luck with your machinegun, the non-sniping sections are nowhere near as good. Contracts 2 doesn’t suffer from the technical fiascos of past entries though and while there are moments of greatness, much of the campaign just doesn’t quite work.

In Short: Carefully engineered sniper action that’s let down by frequent departures into close combat, exposing weak gunplay and a lack of polish.

Pros: The process of studying and picking off enemies at range is hugely satisfying. Large, complex levels with multiple ways to reach targets. A robust challenge at higher difficulties.

Cons: Times when you’re not sniping are a let down – and there are plenty of them. Interface problems routinely lead to your character’s untimely demise.