Solar Ash is a neon-infused high-octane space-adventure title by Heart Machine that offers a lot of visual flair. In the game, you'll be exploring a number of different areas, all of which have a certain amount of logs left behind by your crew, called the Voidrunner Caches.

The Mirrorsea, in particular, has some Caches that are more sneakily hidden, so let's take a look at all their locations now. Just to let you know upfront, the ordering of these Caches compared to the others is odd. Caches that are typically found last are labeled as the first cache in the pause menu, and it's all mixed up.

In terms of the natural order that you'll come across them in your journey around the Mirrorsea, it's very likely you'll want to hunt them down in this order:

That said, we're going to describe their locations in numerical order. 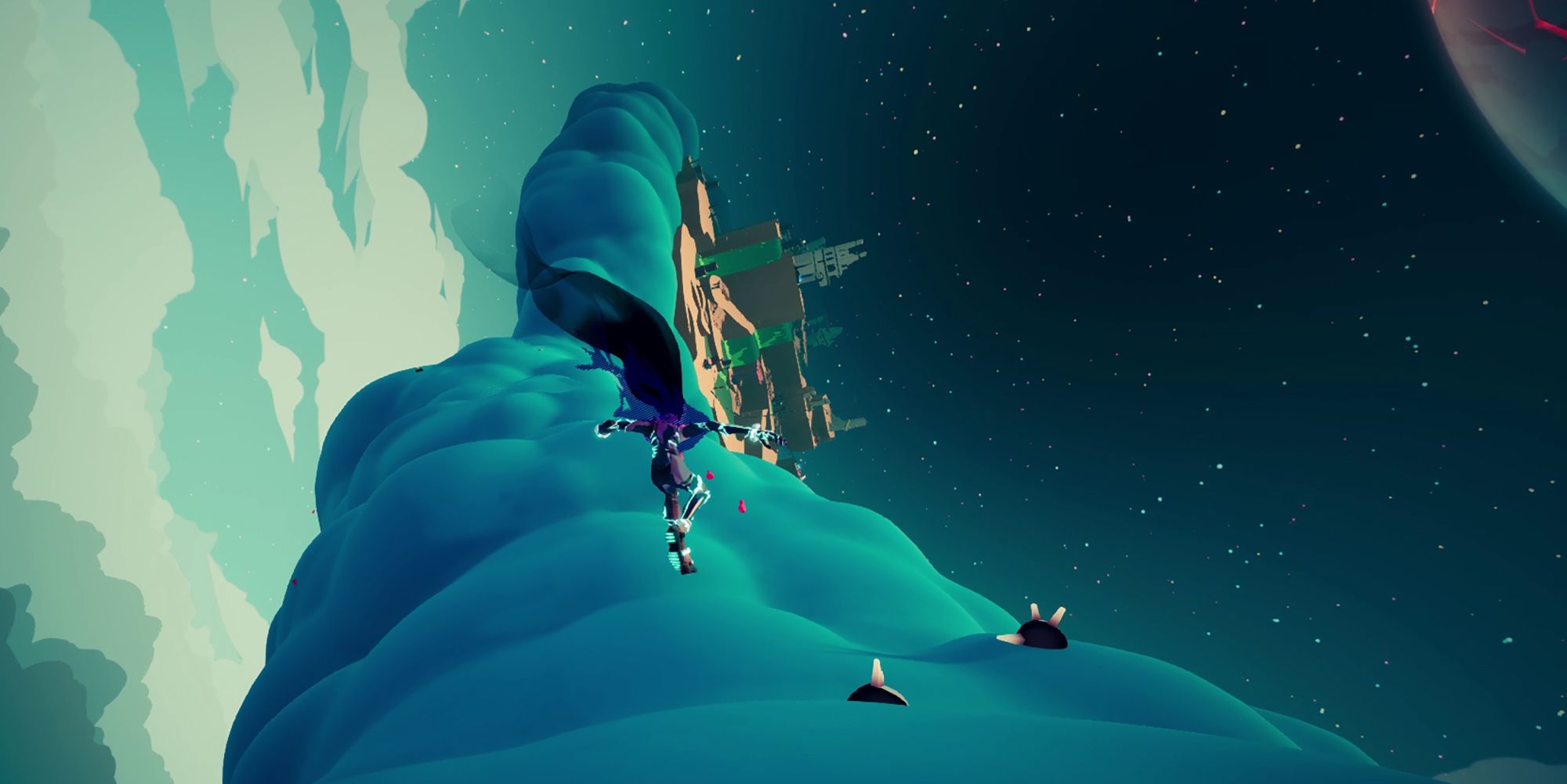 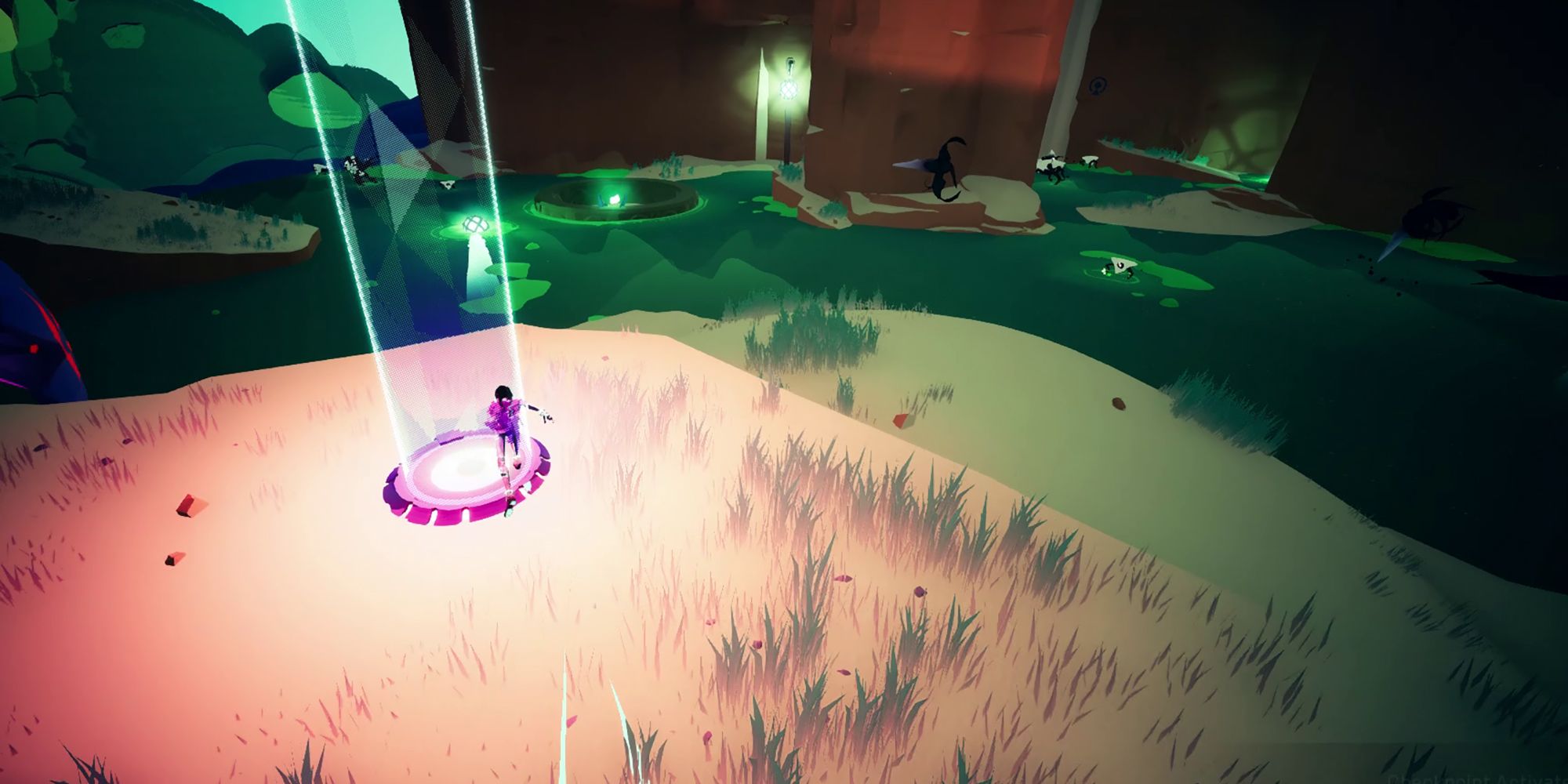 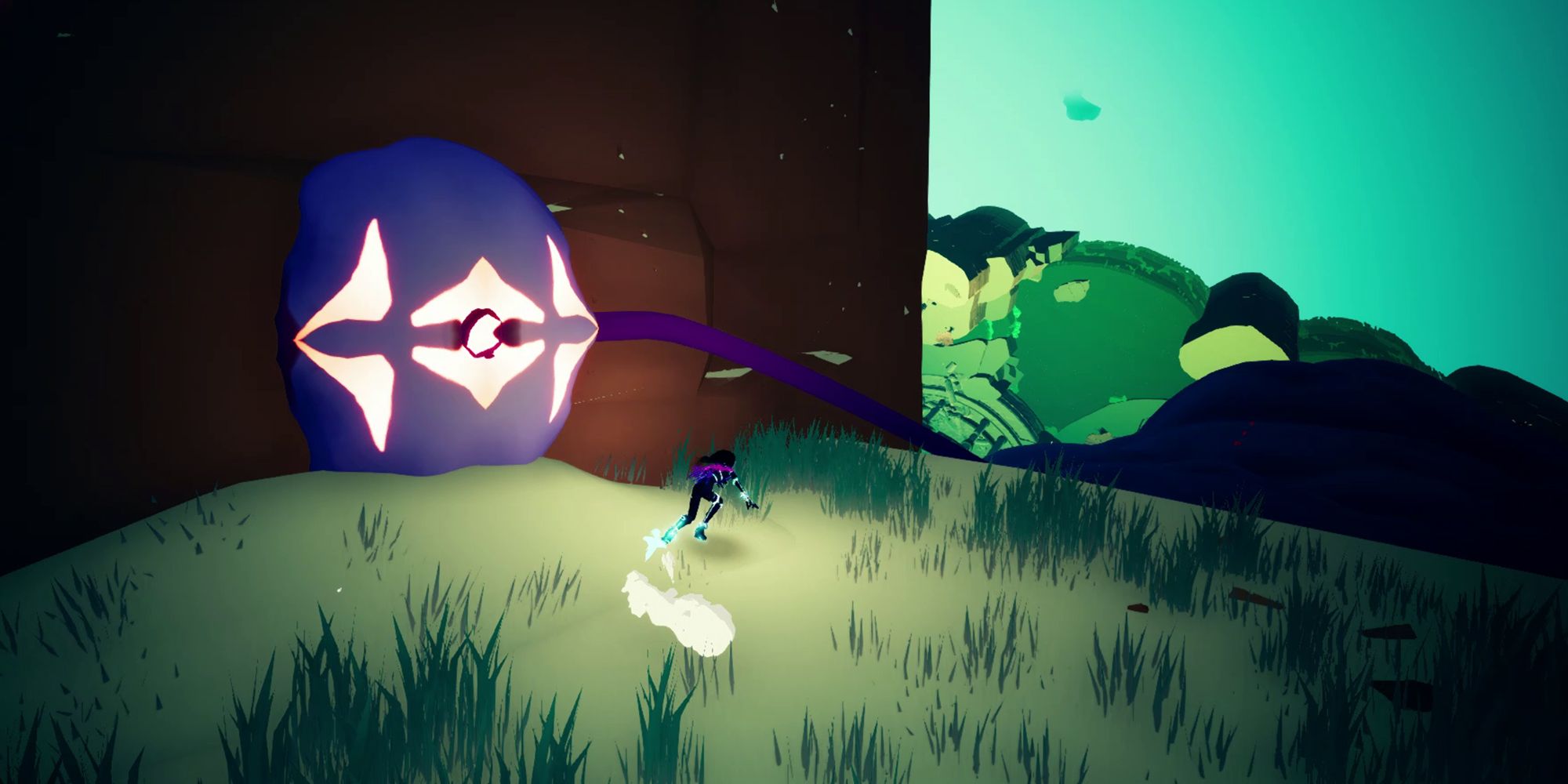 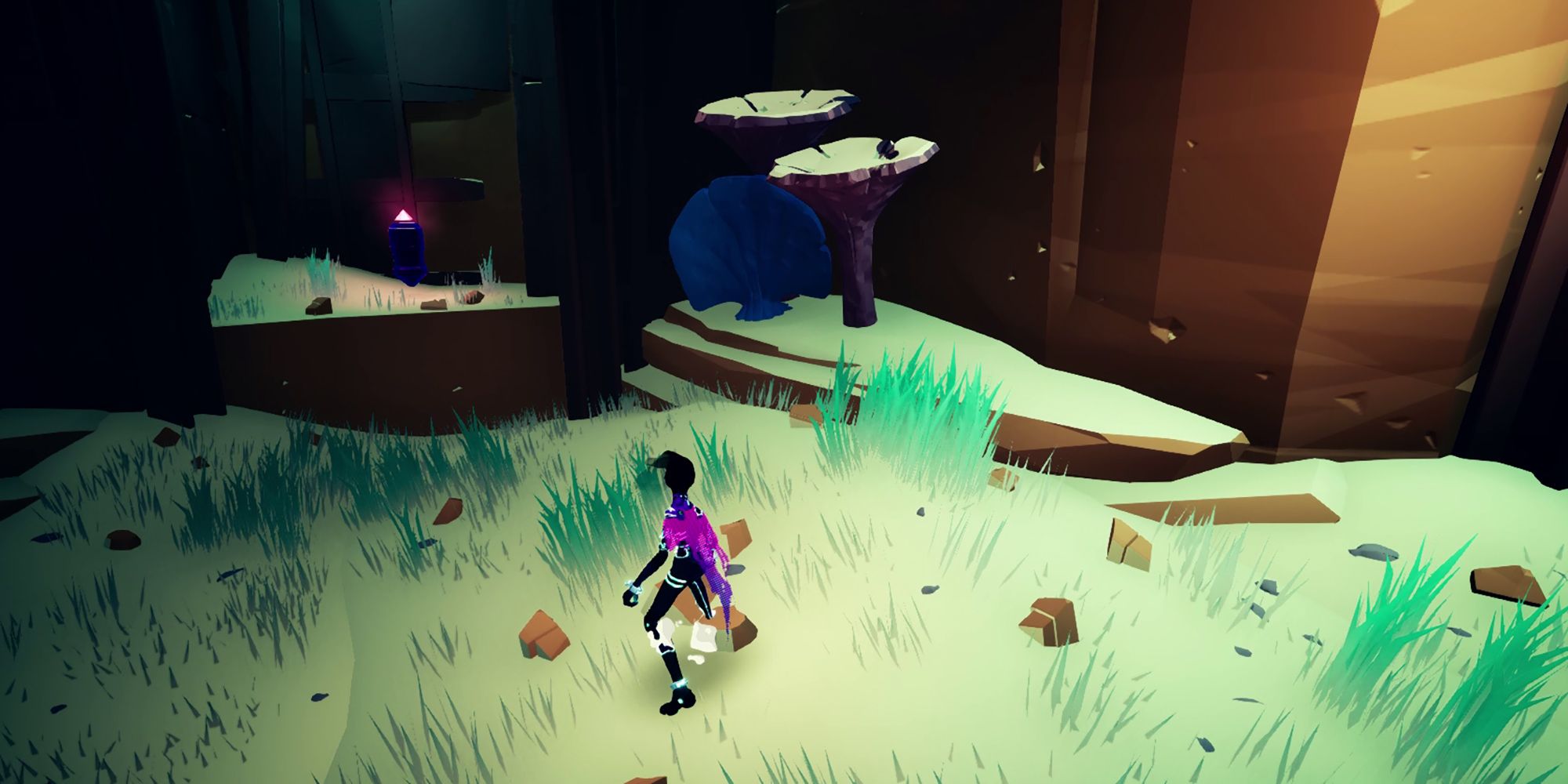 The first "labeled" Cache is on the island at the top of that absurdly tall plume of cloud sea near the Pavillion with the Cyclodorean Vault underneath it. Follow that cloud up to the island, then naturally work your way through the platforming puzzles here until you jump into a tunnel through the middle of the island and out the other side.

Once you're on the underside of the island, hit the Void-infested gate nearby to open the way, then hit the plant that spawns the grind rail on the wall just on the other side. Ride this rail and it should lead you into a cave where the first Cache awaits.

Cache #2: Behind The Sky-High Cloud Plume 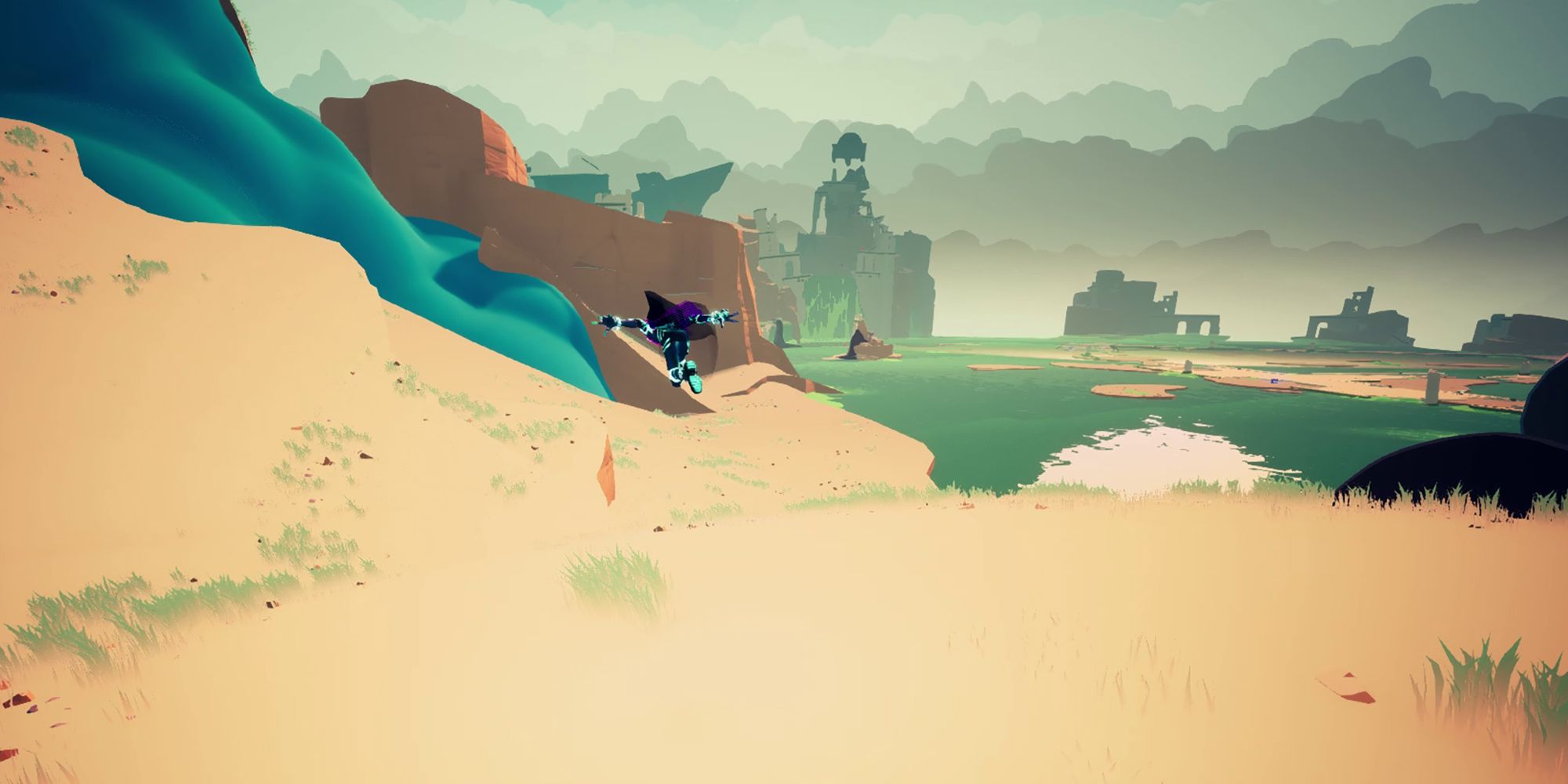 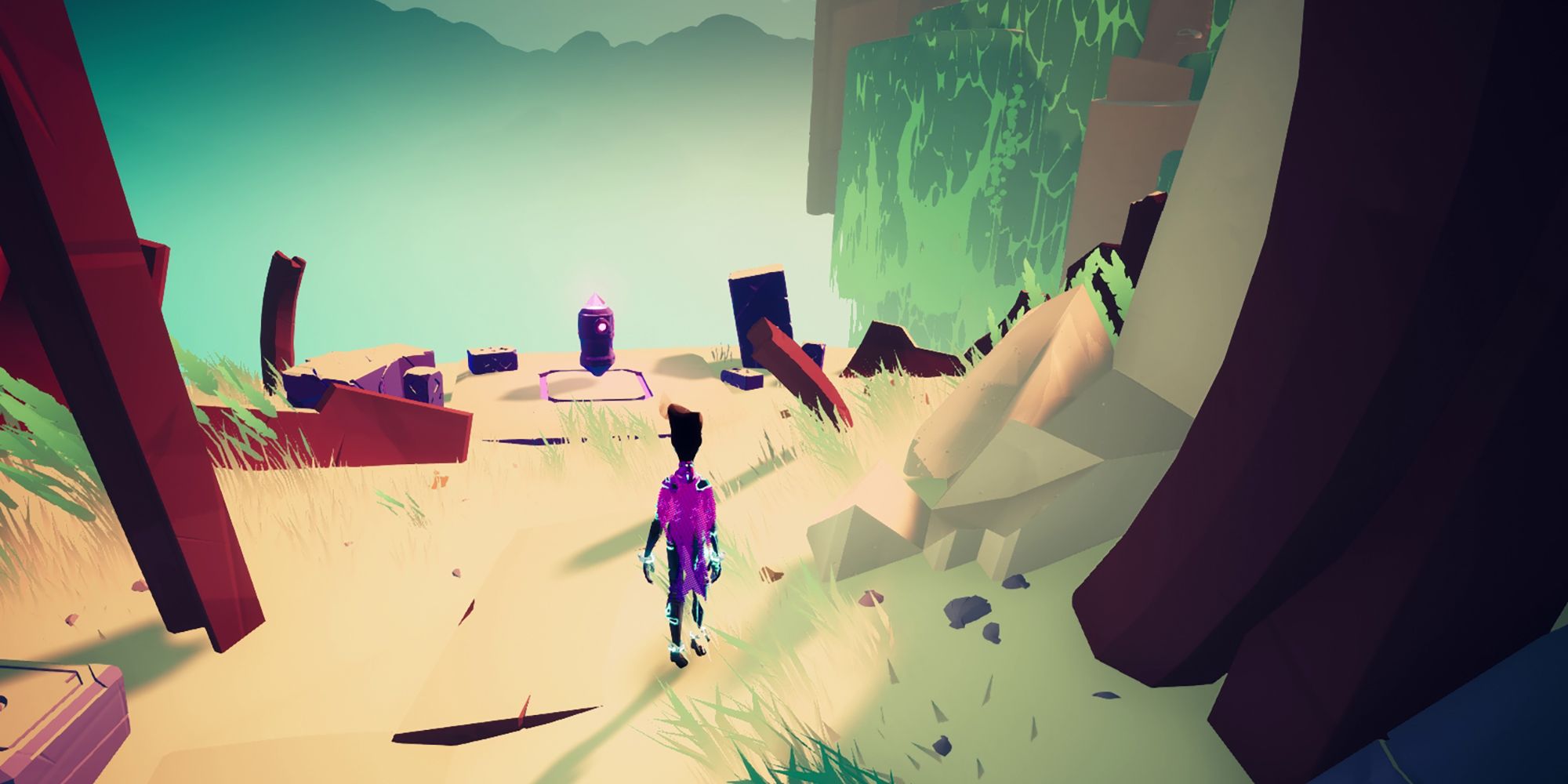 The Second Cache is much easier to find than the first one. Ride back down the gigantic cloud sea plume and circle around to the backside of it. We recommend going around the "left" side of the plume, as going around the right side forces you to do a lot of platforming over the toxic water.

You'll know you're at the backside when you can see the entrance to this man-made structure seen in the second image above. Head into this structure to grab the second Cache as well as an opportunity to read a pretty interesting Journal from another long-gone Ultravoid survivor.

Cache #3: On The Ruins Roof 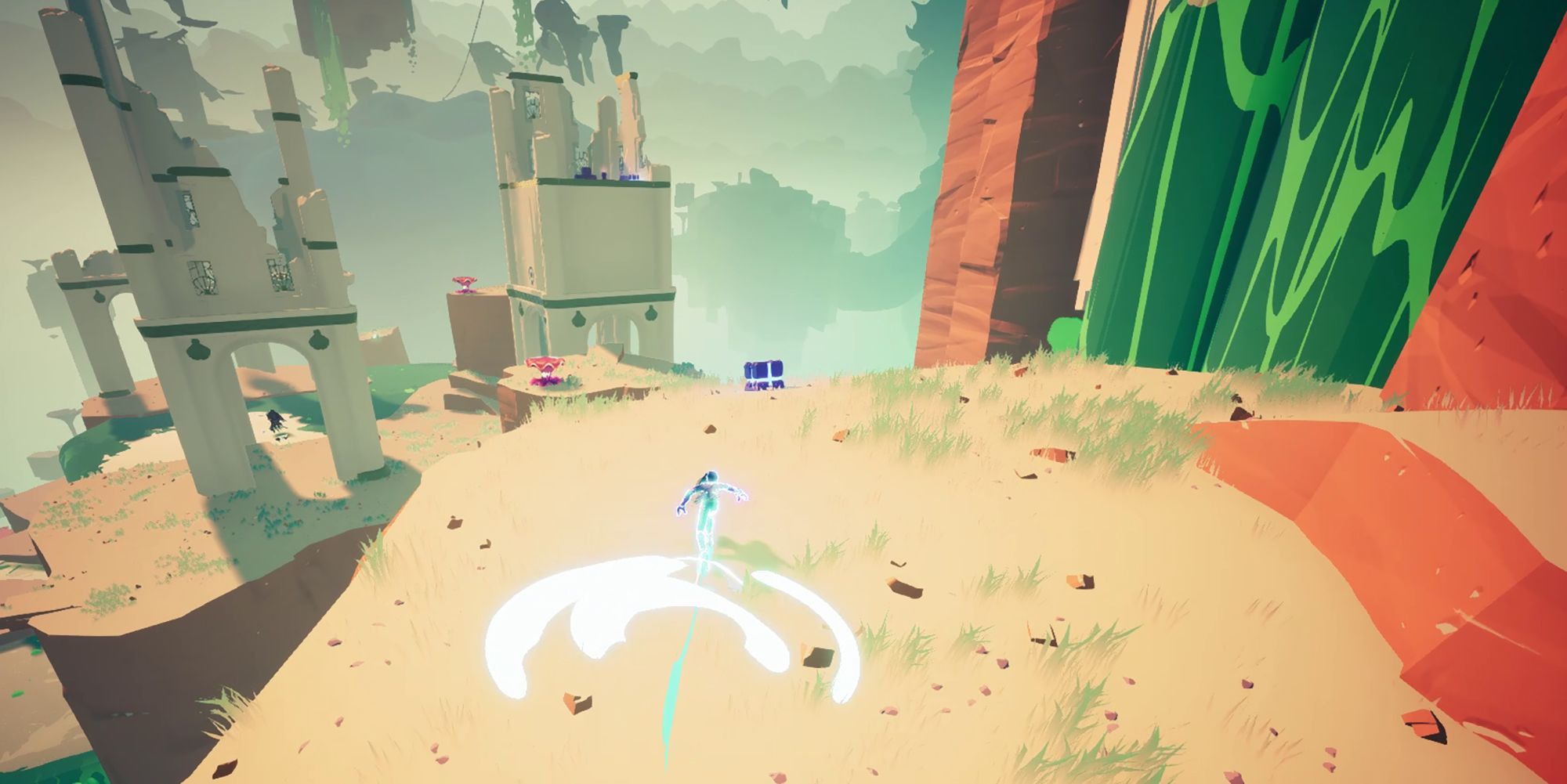 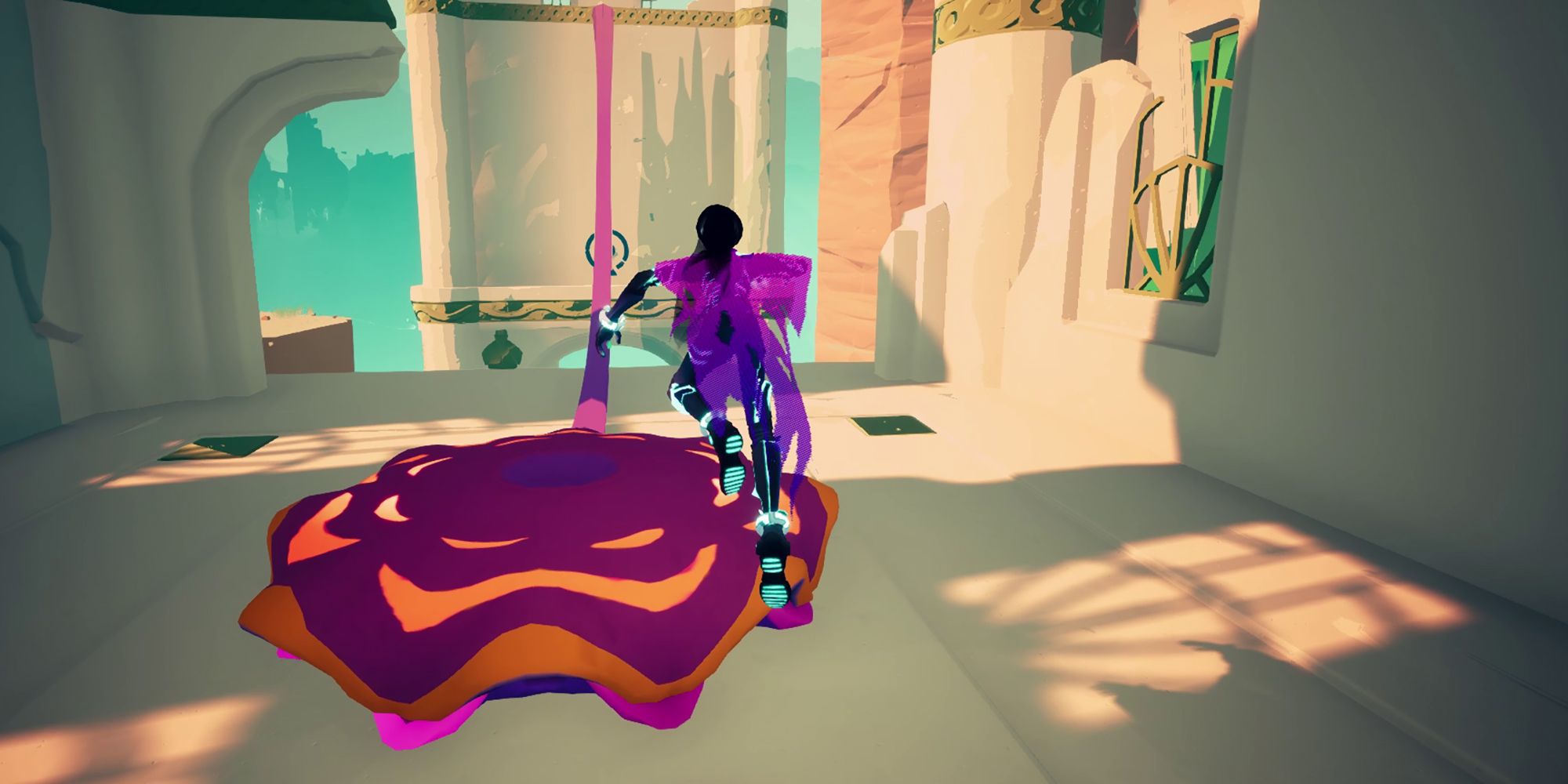 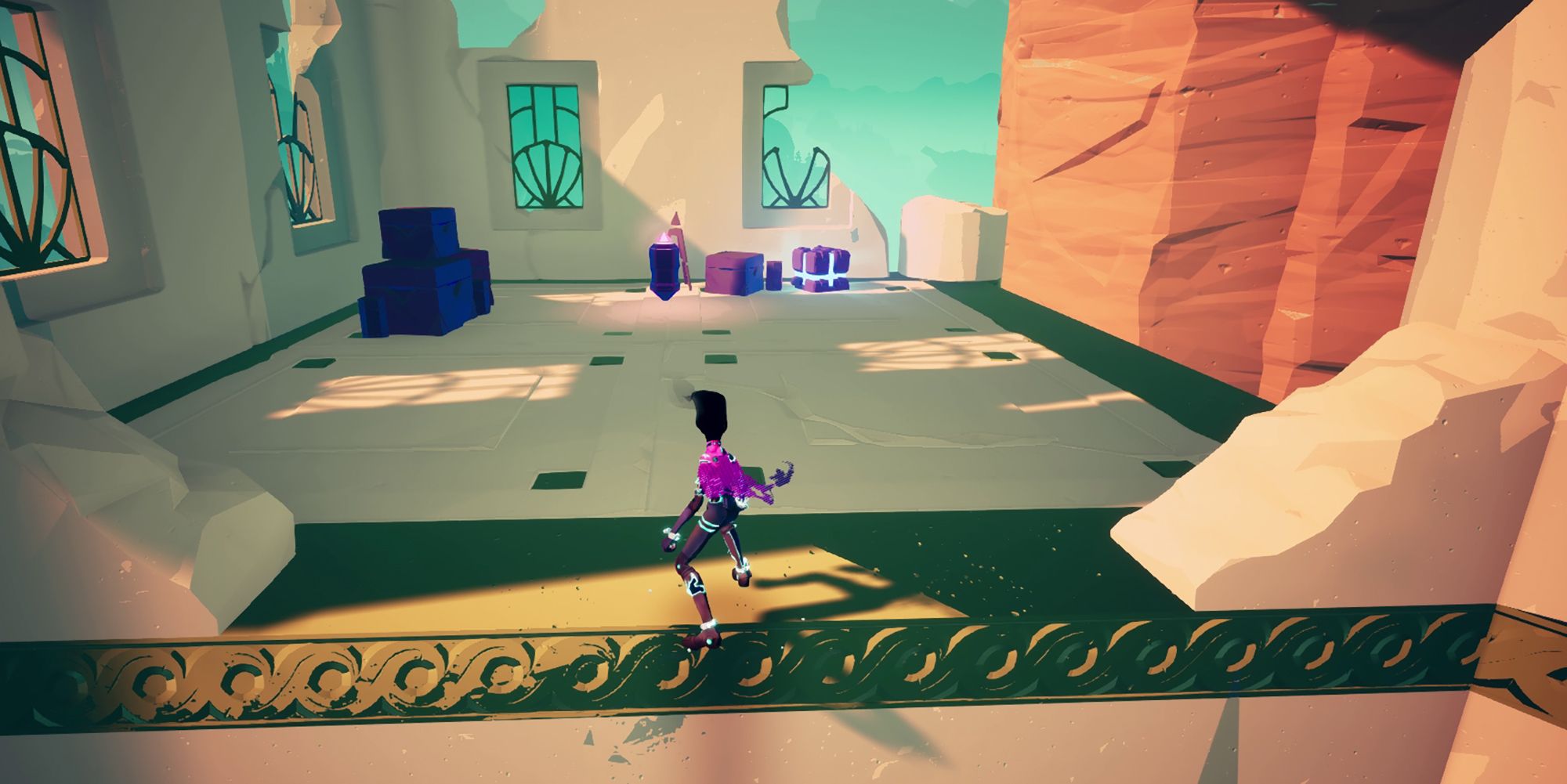 This next Cache is exactly what we mean when we say their ordering is wacky. Almost all of the other Caches are found after you reach the man Cyd platform in Mirrorsea, but this one is found a good distance before it. When you're at the poisonous waterfall with two Grindrails directly across from each other that are both connected to a jump pad, you're just about there. Once you take the jump pad up to the next platform with a grind rail plant, look to your right.

You should see a big fossilized-looking plant you can make the jump to. Jump to it, and follow the path that leads you vertically up the wall and past two of those small white Void-creatures. Up here is the first missing crew Admiral Ames has you searching for. But, just past them is a small cluster of ruins, and that's where the third Cache is.

Cache #4: At The Very Top On The Sky-High Island Underside 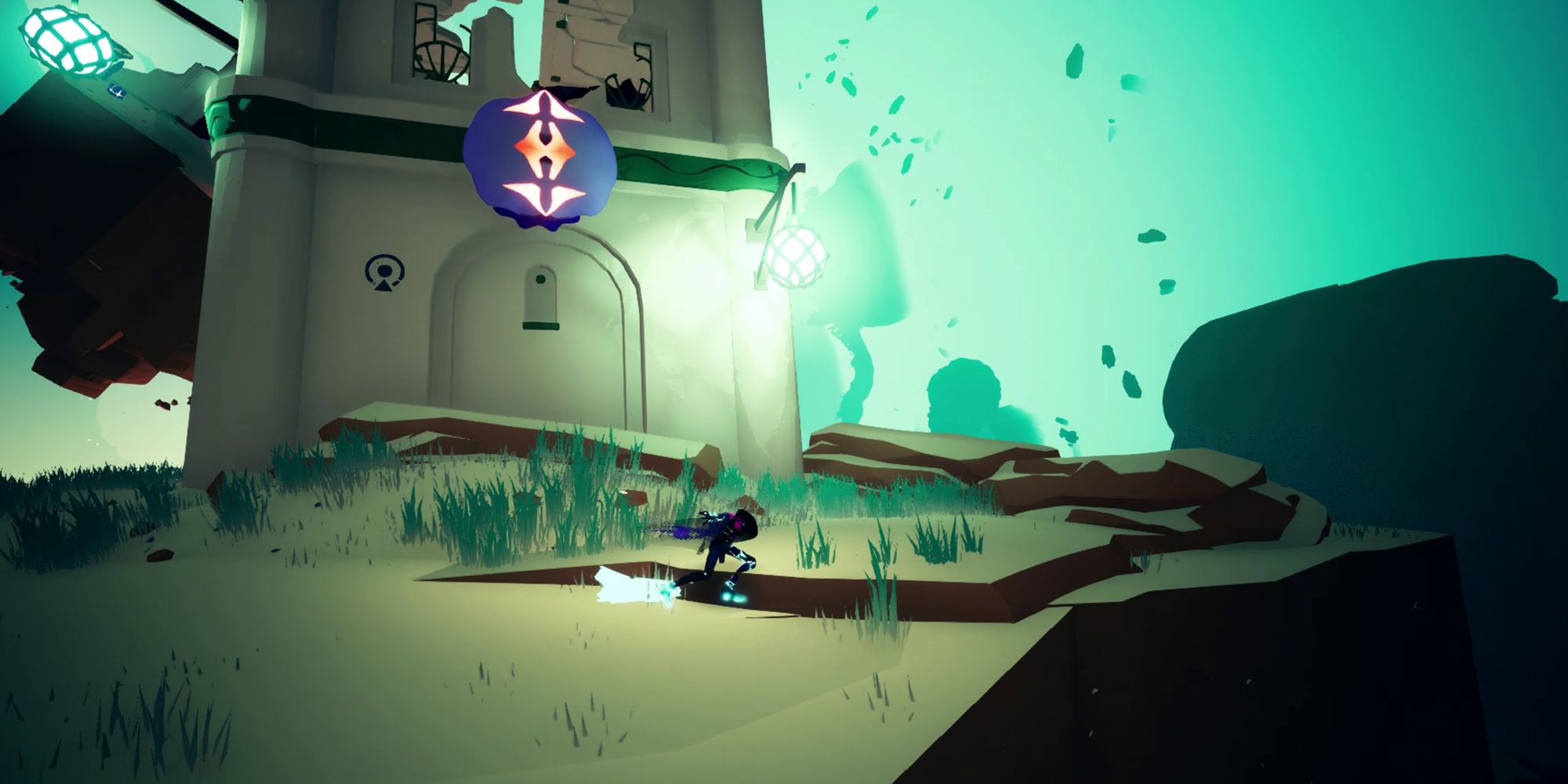 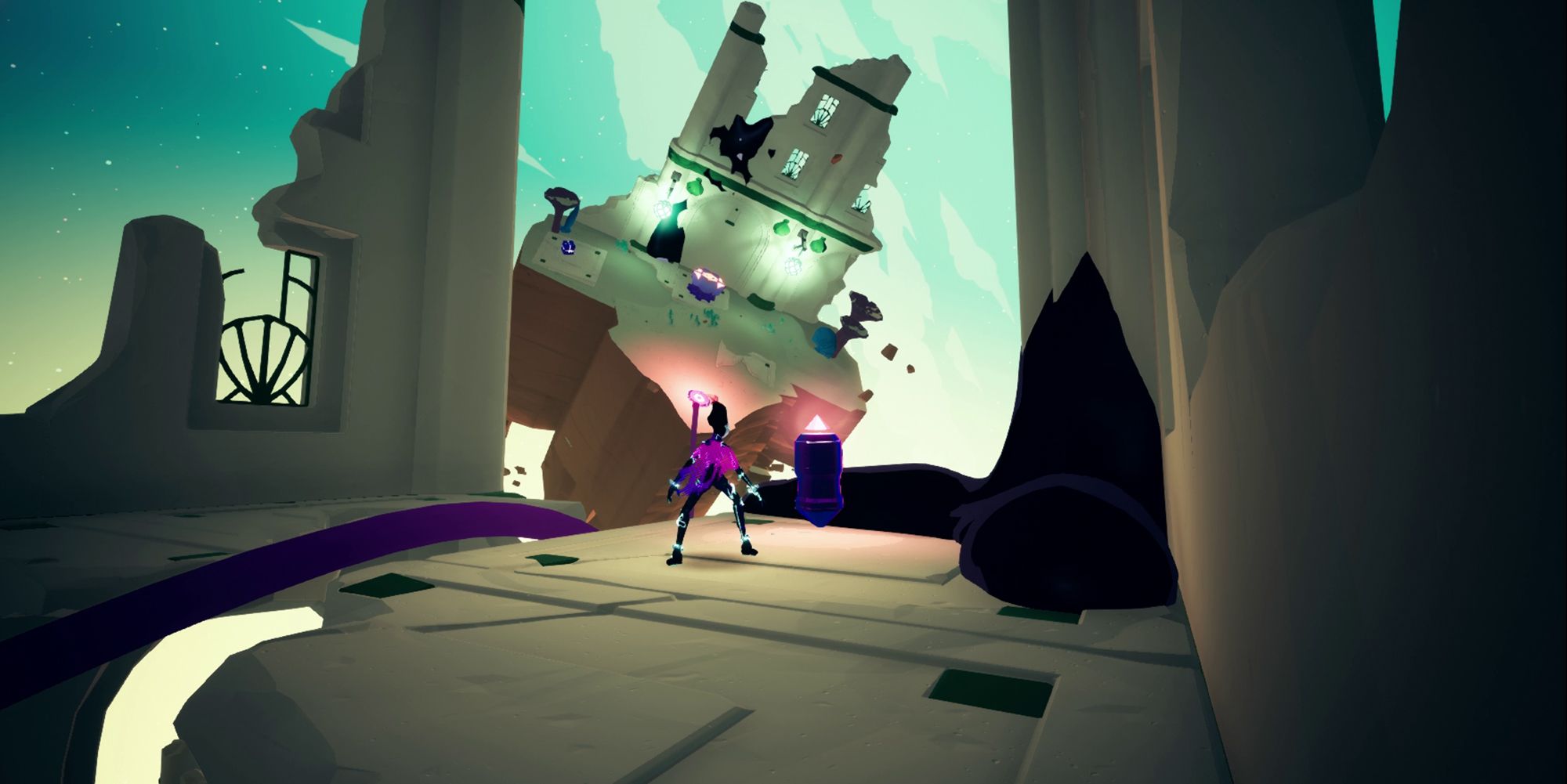 You would think that the two Caches on that island on the tall cloud sea plume would be numbered right after each other, but they're not, so get ready to backtrack to this island again. Once you're there, go back to the "underside" of the Island, and climb all the way up to the top of it until you reach more of the same ruins seen for Cache 3. When you've reached the ruins with the two bird-like Voidcreatures hanging around it, you'll know you're at the right place.

Circle the building until you see the side with the grind rail plant and Voidrunner Sigil on the wall, then hit the plant so that the rail travels up and over the building. Grind on the rail, but immediately jump and head back in the other direction. Jump off the Rail right as you're over the roof of the ruined building that the Sigil was on, and you'll see that the fourth Cache is right there.

Cache #5: On The Roof Of The Pavillion 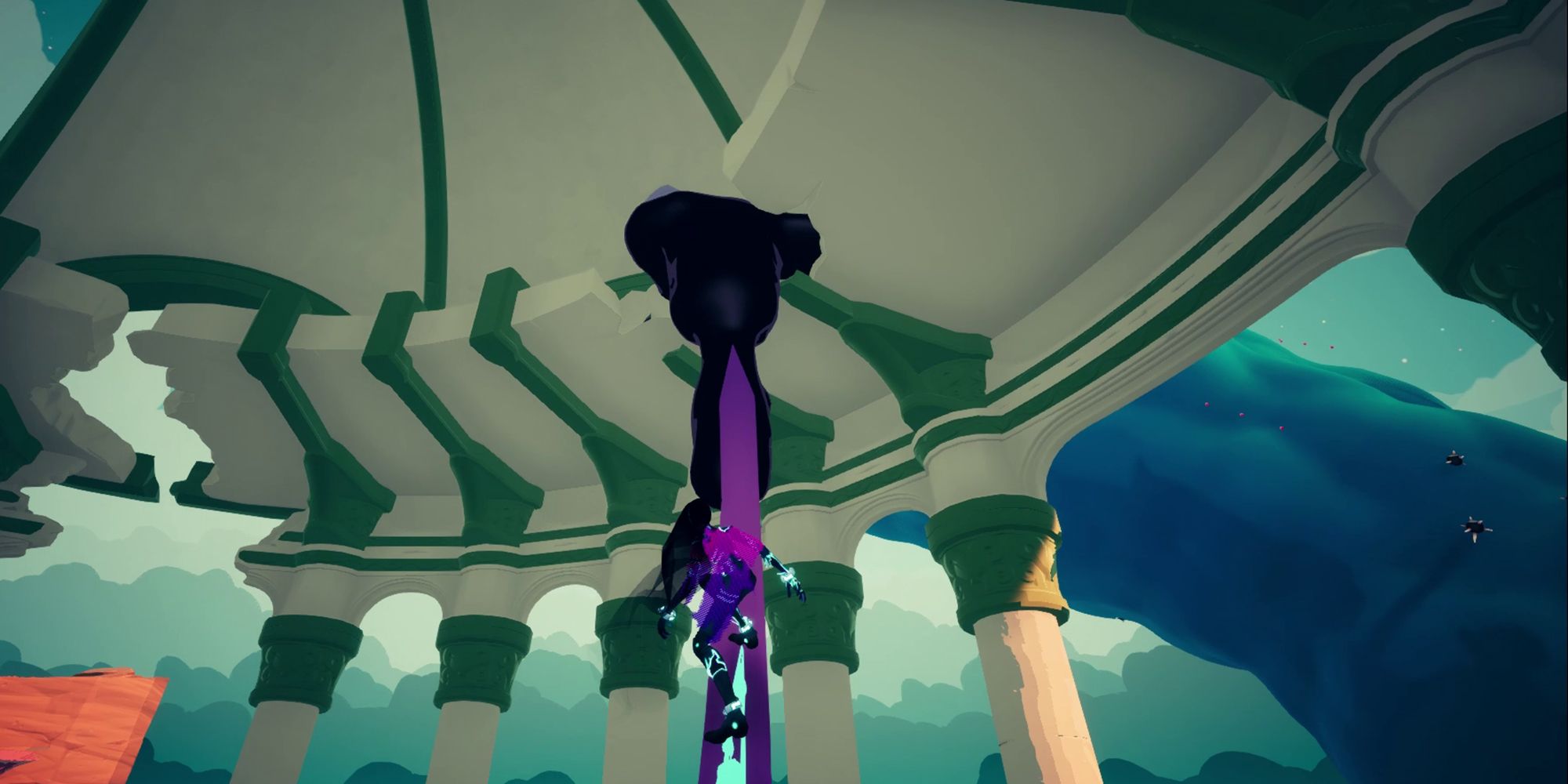 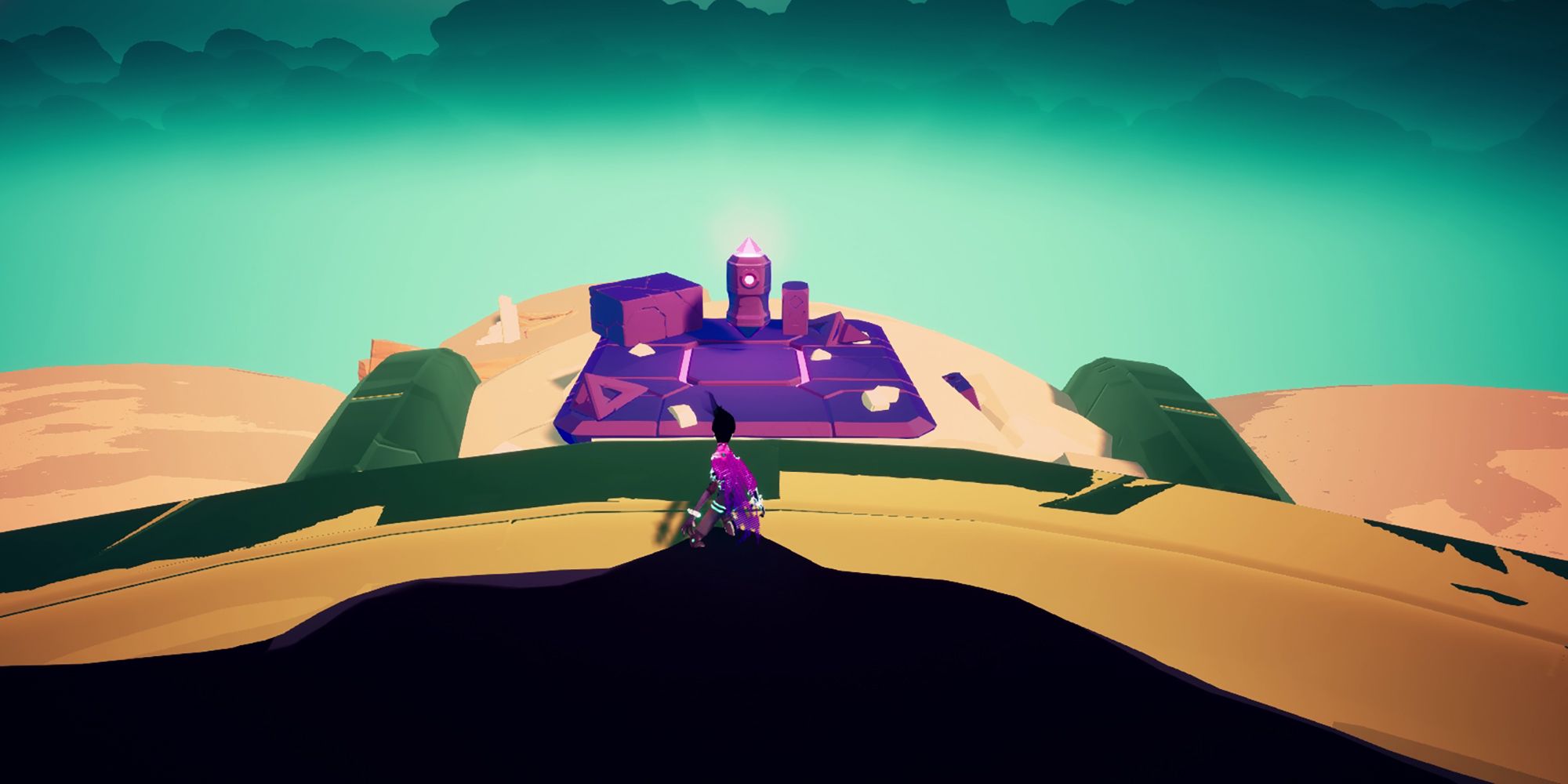 The reason we had this next Cache labeled as being found the latest, is because you can only reach the Voidrunner Cache after clearing out the anomaly here, which most players saved for last. In any case, once you clear out the anomaly, you just have to reach the roof of the Pavillion to get this one.

To do this, hit the grind rail plant near the entrance of the Pavillion and ride it up onto the climbable anomaly ooze that leads to the second floor of the Pavillion. Right as you climb up, there should be a rectangle of that bone-like armor the Massive Anamolies have, use that as a platform to jump to the hanging globule of black goop in the middle. Climb all the way up to the roof using this sludge, and the fifth Cache is just ahead.

Cache #6: On The Floating Cyclodorean Ship 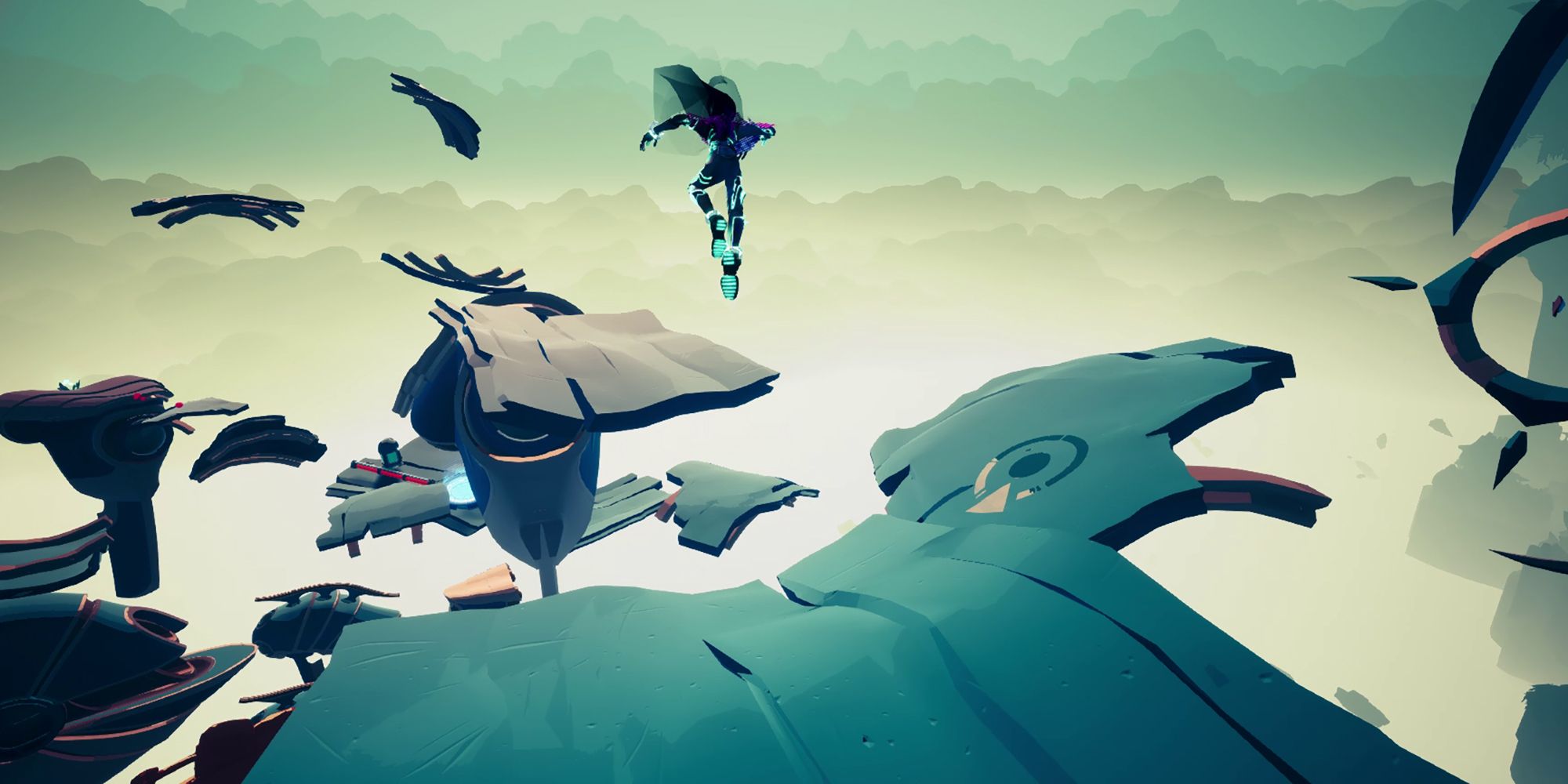 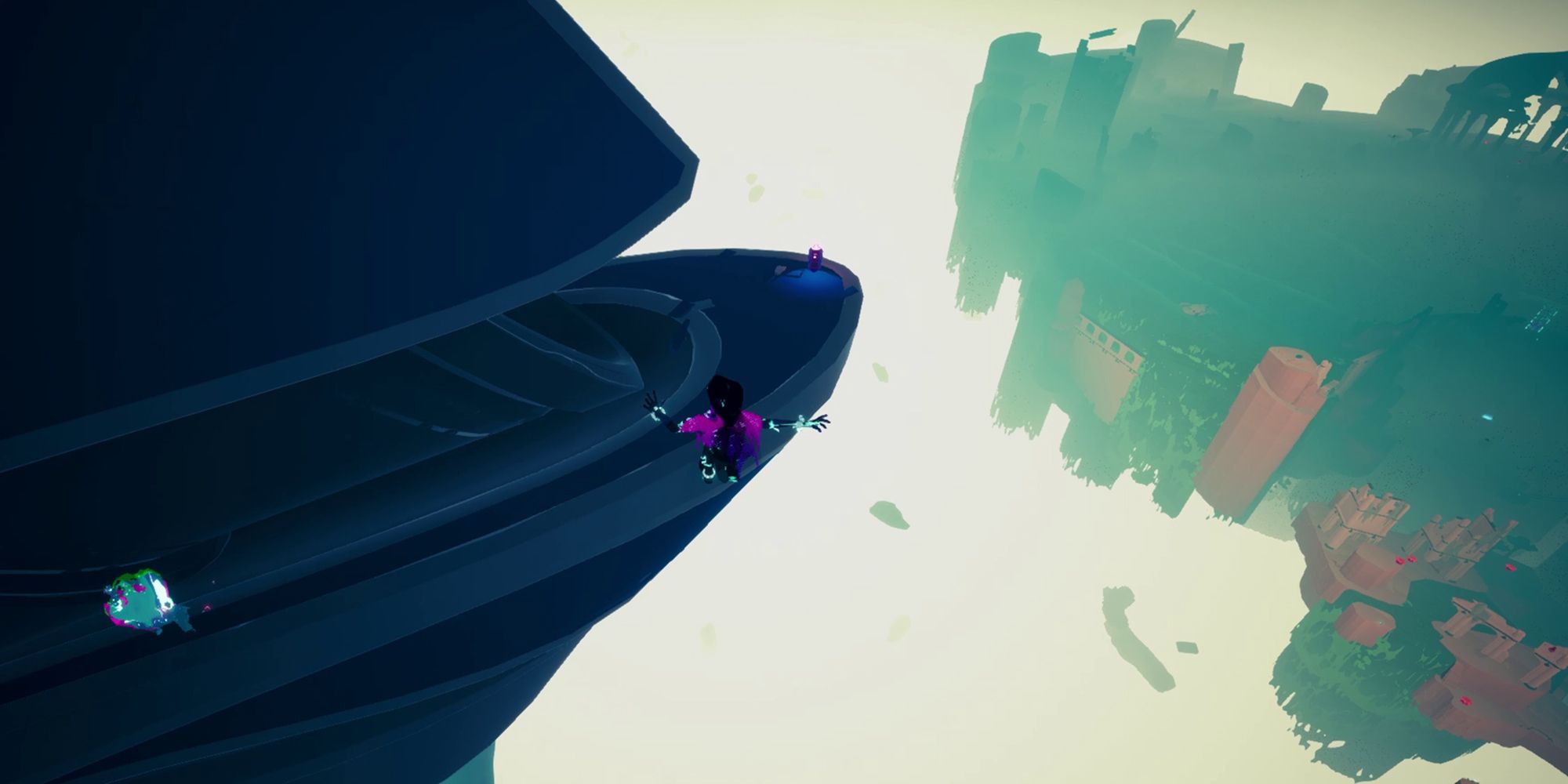 It's frustrating, but the last Cache is actually the one most players find first. This is the Cache you'll come across while you're steadily climbing up the remains of the Cyclodorean Fleet floating above the Mirrorsea. It's a fun platforming section, but the Voidrunner Sigil is easy to miss here since there's so much debris spread around. Once you unlock the last grind rail shortcut (in case you fall), and all that remains above you is the main Cyclodorean vessel with Admiral Ames on it, you'll be right next to this final Cache.

Hop across the two jump pads to the intact ship on the other side of them, and just past that ship should be the floating debris with the Sigil on it. From there, take a right and use the grapple point, ride the two Grind Rails, and it should naturally lead you to the final Cache sitting on another intact ship hanging off on its own. Your reward for collecting all six Caches in the Mirrorsea is Ghozam's Suit, the most overpowered one of the bunch since it literally doubles your overall Attack Power.