Salesforce has emerged as a formidable force in the cloud-based enterprise software sphere — a $200 billion colossus upon which countless others have built their own billion-dollar businesses.

In the past couple of months alone, we’ve seen OwnBackup raise $167.5 million at a $1.4 billion valuation to power cloud data backups for Salesforce; Scratchpad locked down $13 million to develop a productivity workspace for Salesforce teams; and Copado, meanwhile, secured $96 million for Salesforce-native DevOps. According to some estimates, the Salesforce ecosystem could be at least four times larger than Salesforce itself, a factor that has played no small part in Salesforce’s success over the past two decades.

And it’s against that backdrop that Sonar today announced it has raised $12 million from a slew of big-name investors including David Sacks’ Craft Ventures and Slack’s venture capital fund, to bring “x-ray vision” to Salesforce by helping sales teams visualize how all their data is connected and how it’s used across related systems.

“It’s essentially a living, searchable dictionary that shows how your entire tech stack works together and automatically documents every change to your data,” Sonar CEO and cofounder Brad Smith told VentureBeat. “This allows teams to scope and execute their work fast, work confidently without the risk of taking critical systems offline due to breakages, and collaborate effortlessly around change-management projects, digital transformation, systems integrations, building new processes, and more.”

Above: Search, navigate and explore dependencies and apex code in Sonar

Although Sonar is currently focused purely on Salesforce, and showing how other systems are mapped to Salesforce fields and processes, later this year it plans to “start serving more operations teams across the enterprise,” according to Smith. This will include expanding to marketing platforms such as Marketo, HubSpot, and Pardo, as well as finance systems such as Netsuite.

“Change management” is perhaps the key phrase worth picking up on in terms of understanding what Sonar actually does. When someone in a company alters any fields or automations in any of their critical systems, it’s difficult to see how this might impact other processes that might rely on it — the smallest of changes can break integrations, lead to inaccurate reports, and — perhaps more importantly — prevent sales teams from closing deals. For a platform such as Salesforce which thrives on integrations, Sonar shows its users how all their data is joined together, and issues real-time alerts when anything that might impact them is changed.

Sonar can be used either before changes are made to determine how (or if at all) they should be implemented, while it can also give visibility into problems that occur as a result of changes that were made. This is particularly important for teams that are transitioning any of their existing workflows or integrations, as Sonar helps them reverse-engineer processes that may have been set up a while ago by someone no longer at the company, and enable them to understand how everything fits together.

“Sonar gives you complete situational awareness so you can understand the impact of changes before they happen and correct problems if and when they occur,” Smith said. “This helps teams prioritize their work, work faster, and execute changes safely. In the event someone does make a change that causes processes to break, Sonar will alert you to exactly what broke and why.” 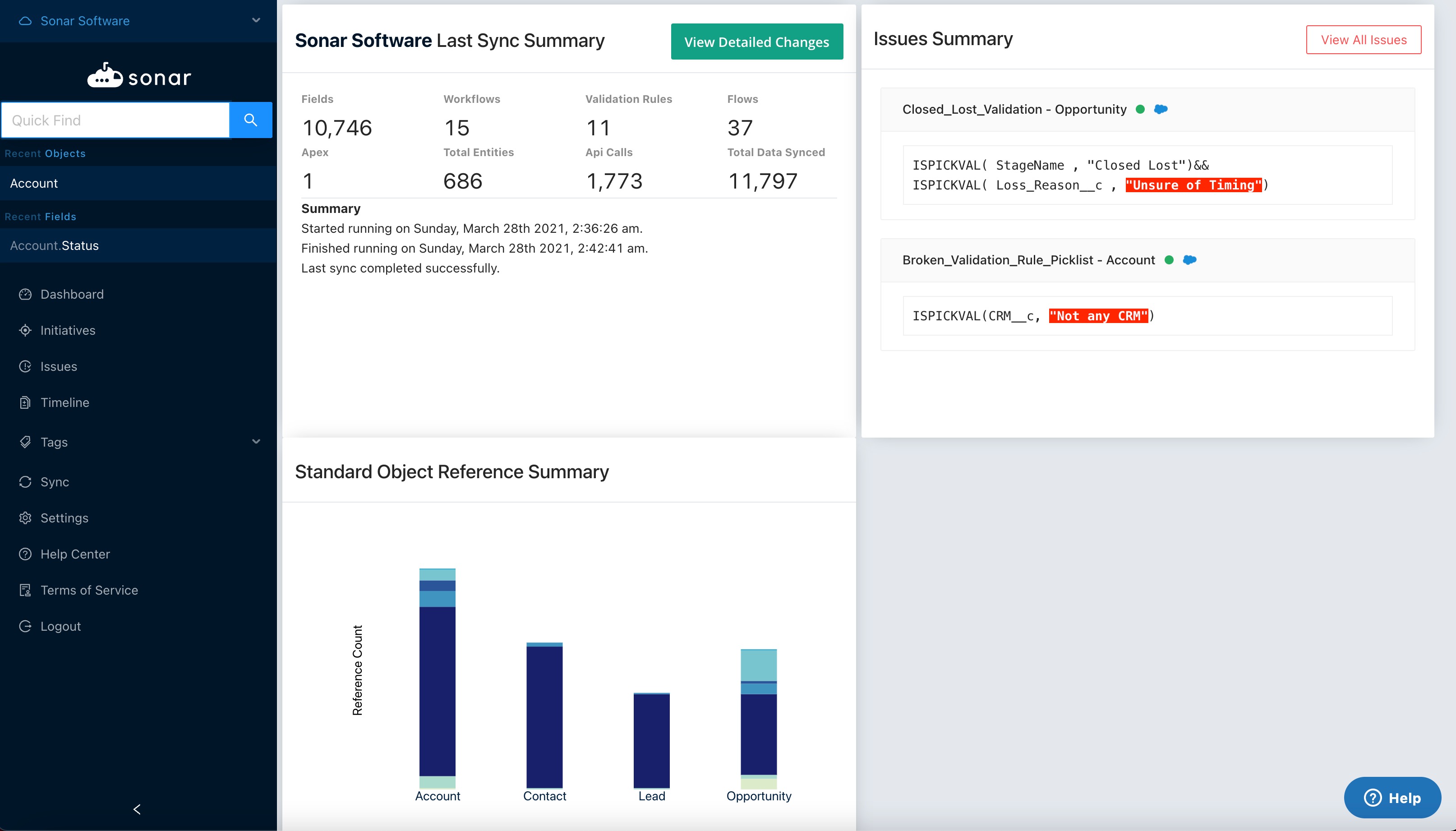 At its core, Sonar is designed to help revenue and operations teams avoid scenarios that historically has meant making blind changes and then scrambling to fix problems after. According to Smith, Sonar does something “similar to what GitHub does for software engineers,” in terms of how it documents every change you make and records the full history and context around it. Except rather than focusing on codebases, Sonar is concerned with integrations across a company’s tech stack, allowing non-technical teams to handle at least some of the heavylifting behind the scenes.

Sonar is available as a standalone web application, though the company also offers a browser extension which overlaid data on top of Salesforce to help visualize dependencies across every field.

Founded out of Atlanta, Georgia, in 2018, Sonar had previously raised $3.7 million, and over the past year it said its customer count and revenue has increased by 1,000 percent and 3,000 percent respectively. It has also signed up notable enterprise clients including OneLogin and Carta.