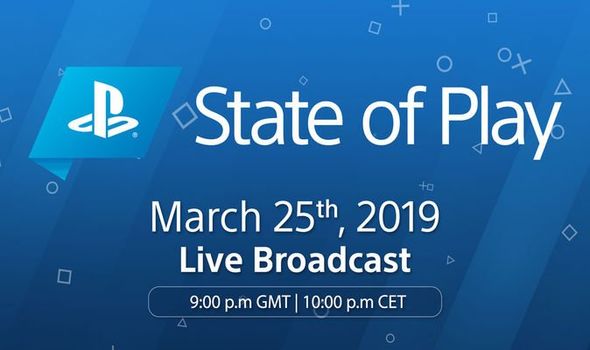 UPDATE ONE: The Sony PlayStation State of Play streaming event is about to begin and has a scheduled start time of 9pm, GMT.

A YouTube embed link is available below that can be used to click through to the big State of Play streaming event.

We have had plenty of reports regarding the new console, and now Sony has confirmed the State of Play streaming event for today.

Unfortunately for those hoping to see a peek of the future, there’s very little chance that PS5 release news will be included.

The official announcement for State of Play focused on new PS4 game software, as well as news regarding PlayStation VR.

And if this is the whole point of State of Play, then having anything from the PlayStation 5 could make it completely redundant.

Even if Sony dropped just a small hint, it would be the thing that everyone was left talking about, stealing the thunder from whatever new stuff is revealed.

Instead, we can expect the tech giant to reveal some new PS4 games and flesh out some titles expected to be launched later this year.

There are a lot of existing PlayStation projects that still have key details missing, so there is a lot of scope for what could be talked about.

Game trailers for the likes of The Last of Us Part II and Death Stranding will be in high demand among fans.

There are also plenty of other games in the works that will no doubt get a good showing.

MediEvil and Crash Team Racing should be one of them, so expect a release date as part of the State of Play live stream.

Dreams is supposed to be launching in Spring 2019, so a proper demonstration or trailer doesn’t seem out of the question.

There’s also nothing blocking Sony from teaming up with third-party partners to tease a few multi-platform projects.

Could we get a little hint regarding the new Call of Duty game today?

Here’s what Sony has said will be shown during the State of Play event today, adding in a new statement:

“Glad to finally be able to talk about this! Today, we’re introducing a new video programme called State of Play, and the first episode kicks off Monday, 25th March at 9pm GMT / 10pm CET.

“State of Play will give you updates and announcements from the world of PlayStation. Our first episode will showcase upcoming PS4 and PS VR software, including new trailers, new game announcements and new gameplay footage.

“And this is just the beginning! State of Play will return throughout the year with more updates and announcements.”